When reviewing a product the first thing we always realize is that there is no such thing as a perfect product.  There will be issues with any motherboard that someone will not like, but typically these are not deal breakers.  Tradeoffs were made with the 890FXA-GD65, and as such there are a couple of weaknesses to the design that I find annoying.  These are not significant enough for me to pour on the hate and give this a bad review, but they are certainly worth keeping in mind when choosing a motherboard.

There is no native Firewire support on this board.  Certainly this is a checkmark for some people, but the vast majority of folks I know do not have many Firewire enabled products.  I at least do not.  Dual Ethernet is another feature that very few people use, especially with the advent of cheap and pretty capable home routers.  The control buttons built into higher end boards are really only good for bench testing, as they are not accessible to users who actually mount these boards into a closed case.  Plus why reach into a case in the first place and struggle to find that power/reset button when two wires can be attached to the motherboard to the actual case and be externally and easily available?  Multi-GPU setups are still very rare in the wild, and something like 2% of users have multi-GPU based machines.  Since the amount of people who actually use MORE than two cards is something like 0.01% of users, the reasons for putting more than two PEG slots on an 890FX board are nonexistent.  So gone are the 5 PEG slots of the GD70 model. 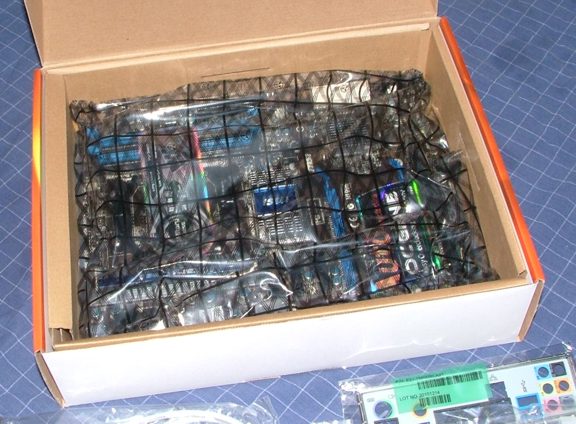 The packaging is environmentally friendly (to a point) and the board is comfortably seated within a solid and sturdy box.  And it looks lonely.


These are the features that MSI has decided to axe to enable the product to hit the price point they have aimed for.  The balance however was not just about seeing what they can cut, but also what they can add.  The largest improvement we see with this model is in the power circuitry going to the CPU.

The GD70 model featured a 4+1 DrMOS power phase system for the CPU and memory controller.  DrMOS is a FET + driver multi-chip module that is overall more efficient than the standard setup of individual chips.  Even though these chips are more efficient, the 4+1 setup will generate more heat than an 8+2 phase array.  In 8+2 the load is spread out through double the chips, and lower heat production can actually result in more efficient operation.  The GD65 does in fact utilize an 8+2 DrMOS power phase array, and is one of the first of its kind on the AMD side for MSI.  The combination of more DrMOS chips to share the load leads to lower overall heat, and less overall thermal resistance per chip.

The board utilizes three nicely sized heatsinks for the DrMOS chips, northbridge, and southbridge.  These are not connected with a heatpipe, and as we will see later on, this is something that could have been really handy.  The board has the very common Realtek 8111C Ethernet controller and ALC 892 HD Audio Codec.  Both of these chips do what they do pretty well, and anymore it is hard to complain about the more than adequate sound coming from the Realtek codec (unlike the situation we saw back before 2006 when Realtek was the butt of many jokes). 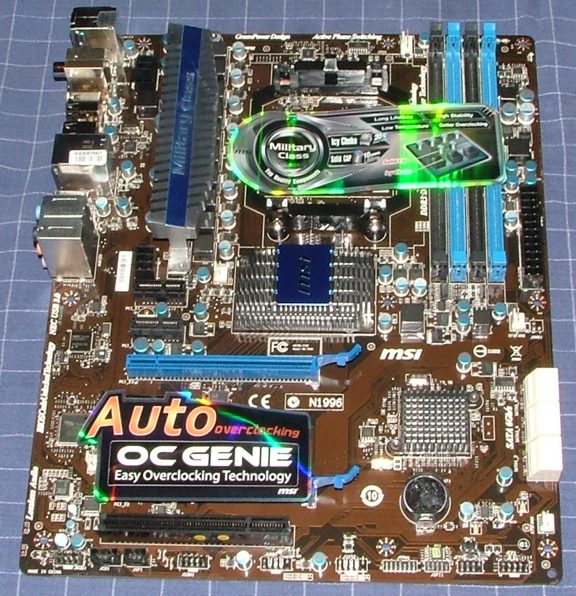 My friends call me stickers.  You know, vinyl makes me go faster.


Of course the 890FXA-G65 is based on the AMD 890FX northbridge paired with the AMD SB850 southbridge.  The primary claim to fame of the SB850 is that it was the first native SATA 6G implementation for a core logic chipset.  Intel followed up nearly a year later with the P67 and H67 chipsets… which were pulled off the market due to a SATA II issue.  The SB850 was a giant leap forward for AMD on the storage side, as their controllers were significantly slower than what Intel and others were able to put out.  SATA and USB performance has been an issue with ATI/AMD chipsets since they were first introduced, and finally with the SB850 we get a well rounded southbridge with very good performance across the board.

MSI did change around the slot placement pretty dramatically as compared to the earlier GD70 model.  Using 2 x PEG slots should free up some more space to put a wider variety of slots into the system.  This is one of the areas where I was slightly disappointed in how the setup worked out.  Due to the 8+2 power setup, MSI had to change the placement of the 890FX northbridge.  MSI also chose to position the CPU socket more towards the middle of the upper part, thereby making less space for the northbridge.  I would imagine this was done to improve the traces going to the memory slots and perhaps the power circuitry as well.  MSI ended up moving the first PEG slot down to position 3, while leaving 2 x PCI-E 1X slots above it.  The first PCI-E 1X is going to be limited due to the placement of the northbridge and its cooler.  There simply is not enough room to install a card more than 3 to 4 inches long in that slot due to space limitations.  The second 1X slot should not be affected, as a cutout is made on the northbridge cooler to allow any potential card to squeeze by.