This placement then leaves a third problem.  If a user has a long, dual slot video card (just about any midrange or high end video card made today) then it will cover up the SATA plugs.  The plugs themselves are rotated towards the edge of the board, so all of them are still usable.  But once a video card is installed, it is really hard to actually access the plugs.  Finally my last complaint about the placement of the slots is that of the lone PCI slot.  PCI sounds cards are still in a majority out there, and if a user wants to have a Crossfire solution AND a PCI sound card, they are going to be out of luck.  Any dual slot cooler based video card is going to cover up the PCI slot and render it unusable.  It seems to me that it would have been more effective to swap the PCI slot with the PCI-E 1X slot directly above the second PEG slot.  That way both a PCI-E 1X and PCI slot can be populated with a full size board in a Crossfire situation. 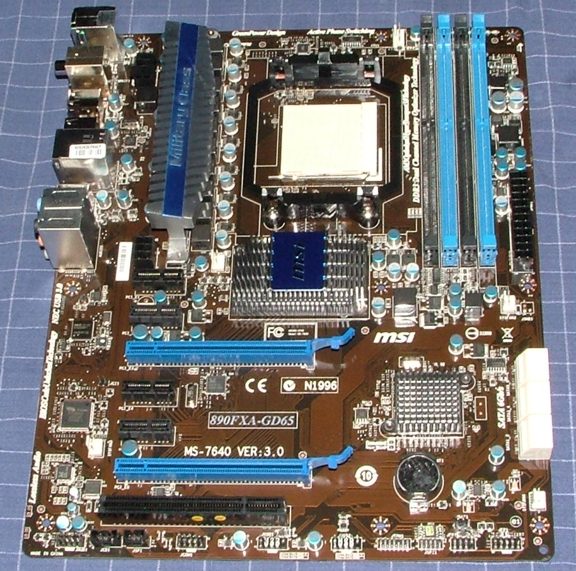 I may be slower, but at least you can see all my parts.  The overall layout is generally uncluttered and easy to identify.  Of interest is the PCI-E 6 pin power plug right above the first PCI-E 1x slot.  That is used to provide power to the PEG slot above and beyond the 24 pin ATX connection.


This board makes extensive use of MSI’s “Military Class II” components.  Super Ferrite Chokes are considered “super permeable” as compared to other ferrite chokes, and have superior electrical performance as well as better cooling than the standard choke.  Hi-C Caps with Tantalum cores are another component which promises better electrical and thermal performance than even other solid caps, plus should have a longer lifespan.  These caps are utilized in high current areas, in this case the CPU power arrays.  Throughout the rest of the board solid polymer caps are used.  Unlike in the early 2000s, MSI motherboards will not see the exploding cap issue ever again.  Hopefully.  These higher rated components should enable the board to have a longer lifespan in standard usage scenarios, as well as be a solid running platform in heavily overclocked situations.

I was not aware of this, but apparently the shipping BIOS of this board caused a few major problems.  The biggest problem was that of some configurations were unable to install an OS with the onboard USB controller enabled.  Even after disabling the USB controller and installing the OS, some users would experience blue screens when trying to re-enable USB functionality.  A fixed BIOS was released, and this is no longer an issue.  For myself I did not run into this problem, as the first thing I did when booting up the board was to go into the BIOS, make sure it was stable, then flashed it to the latest available BIOS on MSI’s site.  After that point, it was very smooth sailing for me.

The BIOS does include the M-Flash functionality.  This is a built-in BIOS flashing program which can backup and update a BIOS without having to use a separate boot disk.  This is oh-so-much nicer than having to find a working 3.5” floppy disk, and pray that the BIOS file does not sit on some bad sectors of that disk.  BIOS flashing used to be a hair raising (or in my case, a hair losing) experience.  More than once in my life has a supposedly simple flash created a large and unusable drink coaster out of a motherboard.  Now we have pretty seamless flashing utilities, and the ability to boot from a rescue BIOS on a flash stick if the onboard BIOS update has failed.

MSI has a good BIOS layout, and everything a tweaker could want to tweak is included.  The Cell Menu is an easy way to get to most of the major settings to overclock the motherboard, as well as some of the basic CPU configurations.  One of the settings that I really liked was that of adjusting the AMD Turbo ratio.  The default Turbo for the Phenom II X6 1090T is 3.6 GHz with up to three cores, but a user can easily set this to 3.7 GHz and above, depending on the tolerances of their specific chip.  When using a Black Edition processor of any stripe from AMD, it is possible to adjust any of the major CPU ratios for overclocking purposes. 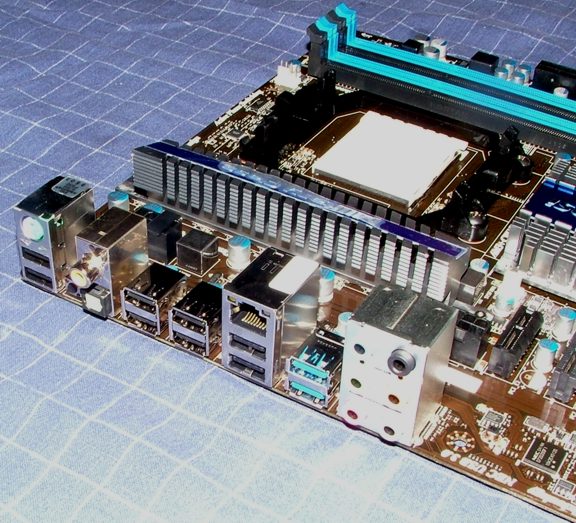 10.  Yes, 10 USB ports.  Two of which are USB 3.0.  Still… 10.  And some audio stuff and a shared PS/2 Keyboard and Mouse connection.  And a clear C-MOS button.  And my remote control.  And this chair.
The latest BIOS includes support for hard drives that are 2.2 TB and larger.  In the advanced configurations menu there are settings to enable “2.2TB Infinity”.  This is not a UEFI BIOS though, so the functionality is a bit limited.  Apparently to utilize a larger than 2.2 TB drive as the boot drive, Infinity must be enabled as well as setting “Raid Type” to IDE.  It will not be recognized in a RAID or AHCI situation as the primary drive.

MSI also includes the integrated Core Unlocker functionality, which can unlock disabled cores on certain processors.  This is by no means guaranteed to work with every dual or triple core processor, but it should give the user the tools to try to unlock their processors if they so desire.  The OC Genie II is a built in auto overclocking utility.  It basically will find the highest HTT bus speed that is stable, combined with what speed a given processor is stable at, and automatically overclock the board.  This works fairly well, and is an easy way for a beginner to dip their feet into the highly addictive overclocking world.

Finally the BIOS has the ability to save multiple overclocked settings, which can be retrieved and applied depending on the user’s mood at the time.  It also allows users to change the “fail safe” mechanism for a failed overclocked.  The standard setting is three tries with the overclocked settings, and if the board fails to boot it will revert back to safe settings.  I was able to test this out, and sure enough after three boot attempts it reset the BIOS and I was able to easily recover and change the settings.