Power readings were taken at the wall with the P3 Kill-a-Watt.  The machines were let sit for 15 minutes without going into power saving mode for idle results.  Load was taken during Game 2 Test of 3D Mark Vantage. 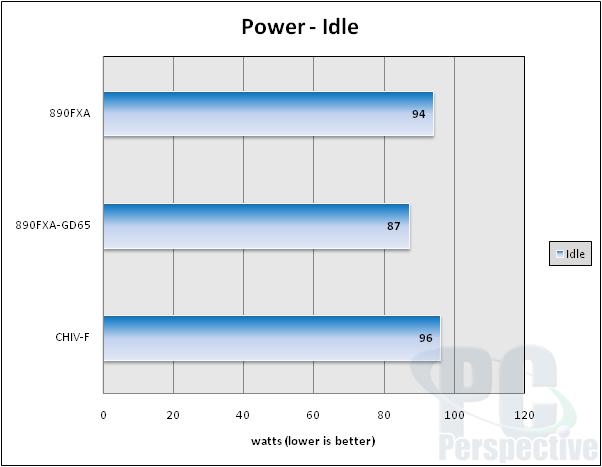 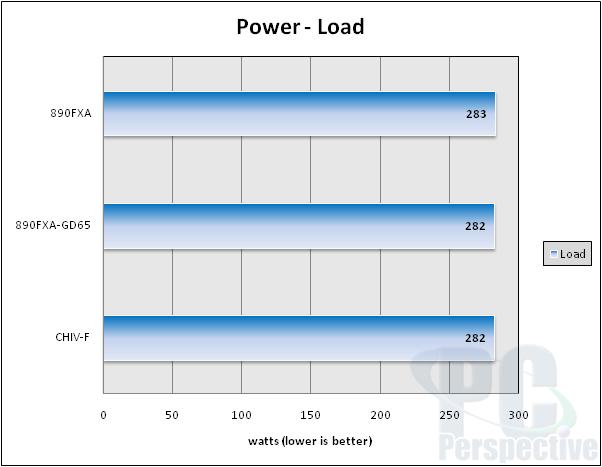 The idle power was significantly lower on the 890FXA-GD65, but we can attribute quite a bit of that to the cut down feature set of the board compared to the “kitchen sink” editions from MSI and Asus.

I used a laser thermometer on the three major heatsinks for this board.  Temps were taken at normal clocks with a highly threaded application running in the background. 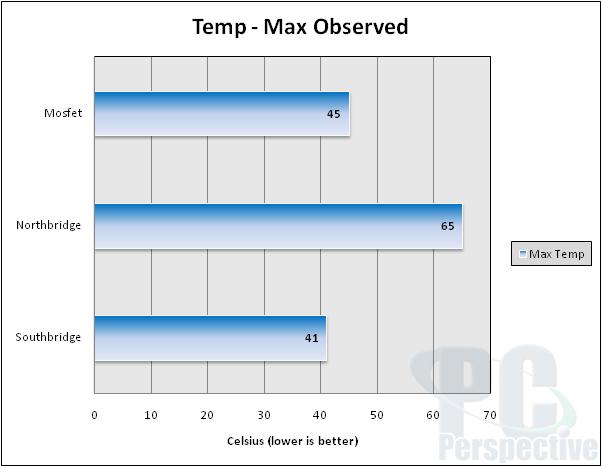 The mosfet cooler was warm to the touch, but did a very nice job in keeping that circuitry cool.  The southbridge cooler also worked very well, but then again southbridges rarely have the tendency to overheat.  The northbridge cooler did get pretty warm.  Not so warm as to desolder itself, or achieve 90C+ temperatures that GPUs often do, but it is still pretty warm.  A heatpipe connecting the three units would have helped even the temperatures out.

The OC Genie II was able to take the 1090T to 3.632 GHz @ 1.304 volts.  It set the HTT bus to 227 MHz, which resulted in a HTT link of 2270 GT/sec.  The northbridge on the CPU was clocked from 2 GHz to 2.27 GHz.  This resulted in slightly better memory and L3 cache performance.  Unfortunately this was offset by OC Genie II lowering the memory speed from 1333 to 904.  Happily, this setting can be changed by the user and we see a nice 2GB/sec performance gain over stock results by setting the memory at 1500 MHz+. 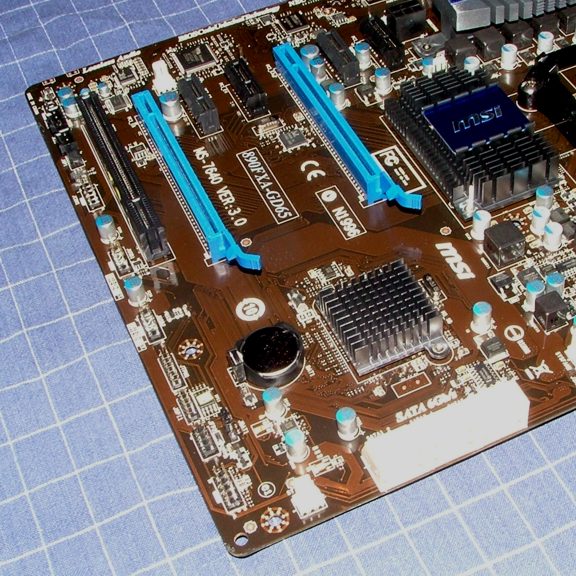 The southern portion of the board, not to be mistaken with the islands.  That is GPU land.  Instead we see the 6 SATA 6G ports as well as… gasp… more USB 2.0 headers.


Using only the multipliers I was able to achieve 3.95 GHz @ 1.45 volts on this particular CPU.  This is pretty average for this particular chip, and we achieve some nice performance gains.  The northbridge portion of the chip can hit 2.6 GHz with 1.2 volts, but it gets pretty toasty.  2.4 GHz with 1.1 volts for the northbridge portion makes a significant positive impact in temperature and power draw as compared to the higher setting.

Overall I was quite pleased with the stability of this board in overclocked situations.  The northbridge did get pretty toasty, but it did not seem to hold back the board.  More expensive boards like the 890FXA-GD70 and Asus Crosshair IV Formula can do 330 MHz+ with HTT, but for most overclocking purposes 325 MHz is more than adequate.