The Toshiba Satellite C655 review was our first look at AMD’s Fusion processors, but that laptop was powered by the E-240, a single-core variant with a clock speed of 1.5 GHz. The CPU performance was somewhat better than Intel’s Atom, which was disappointing. The integrated graphics were reasonably quick, but they can’t do everything on their own. This resulted in a generally sluggish feel and choppy playback of high-resolution Youtube videos.

While the E-350 in the Sony Vaio Y is an architecturally similar beast, it ups the ante by including two cores instead of one and cranking the clock speed up to 1.6 GHz. The integrated graphics are essentially identical to those found on the E-240, but that’s no complaint. I’m hoping that the combination of a dual-core processor with the already powerful graphics will provide a better-rounded package. Let’s find out. 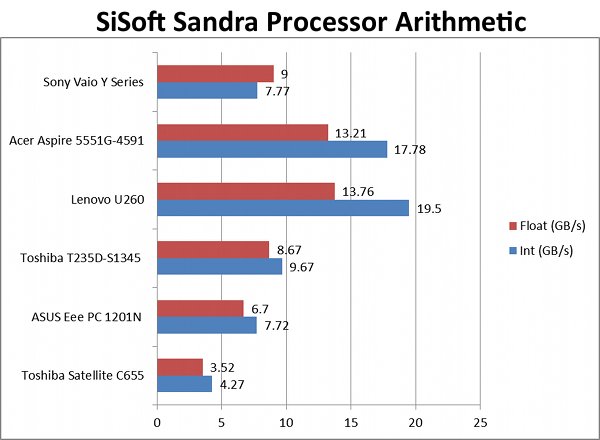 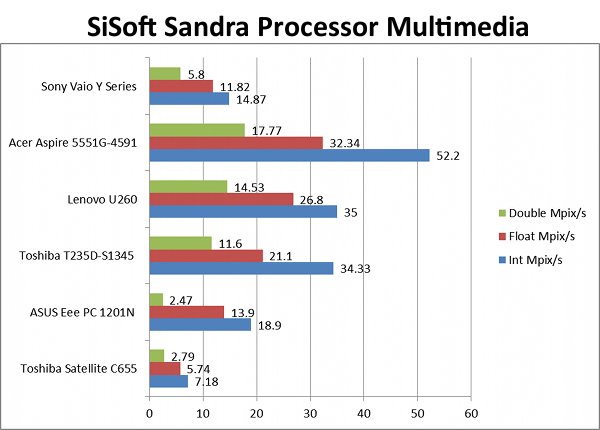 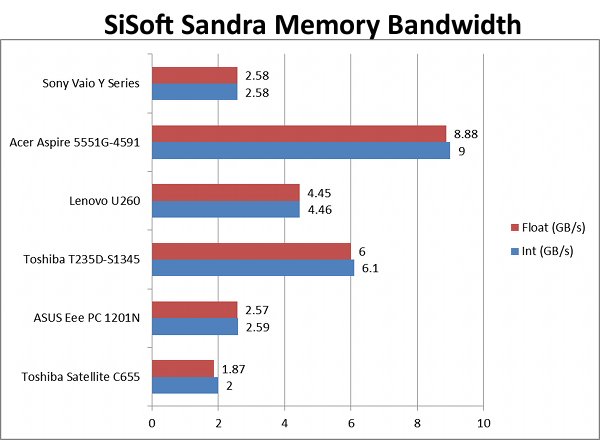 There aren’t any surprises to be found here. The performance of the dual-core E-350 is about twice that of the single-core E-240 in nearly every category on every benchmark with the exception of Memory Bandwidth, where we see just a slight improvement.

The real match-up to watch here isn’t the E-240 powered Toshiba Satellite C655, but rather the ASUS Eee PC 1201N. That netbook, reviewed by PC Perspective nearly a year ago, carried a dual-core Atom 330 processor clocked at 1.6 GHz. The Sony Vaio Y essentially tied the older ASUS across the board. That’s a bit disappointing. Remember, AMD was claiming that these APUs were going to provide “90 of mainstream performance” in a very tight power envelope. They’ve achieved the tight power envelop, but the processor performance seems little better than Atom, a processor introduced three years ago that has had only minor performance revisions since.

Perhaps the performance picture is better in our general synthetic and application benchmarks. 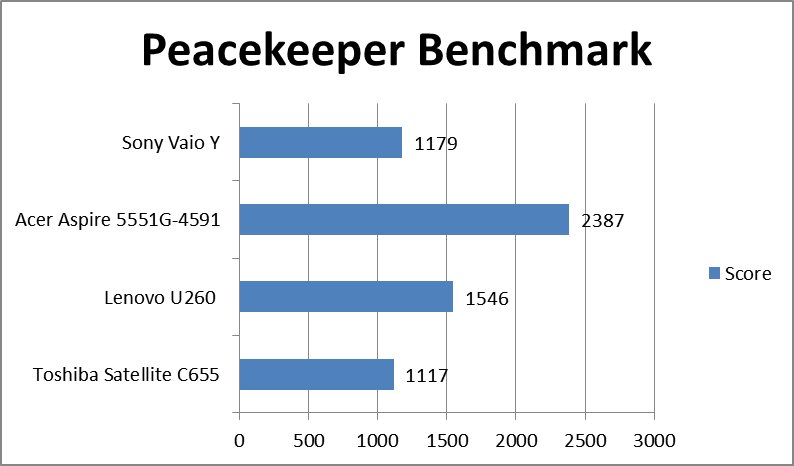 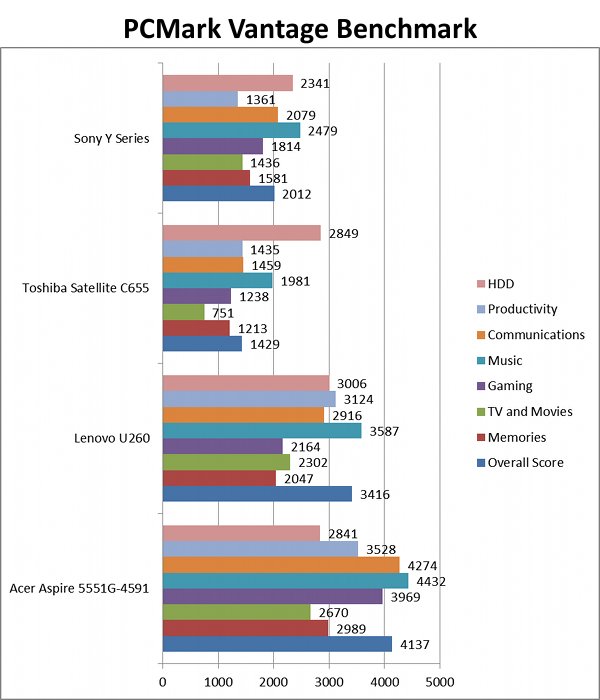 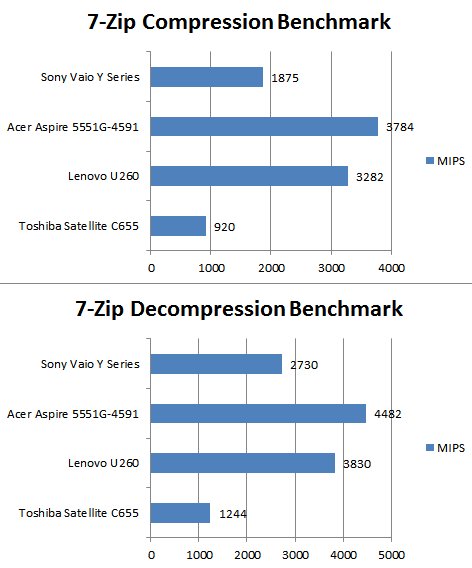 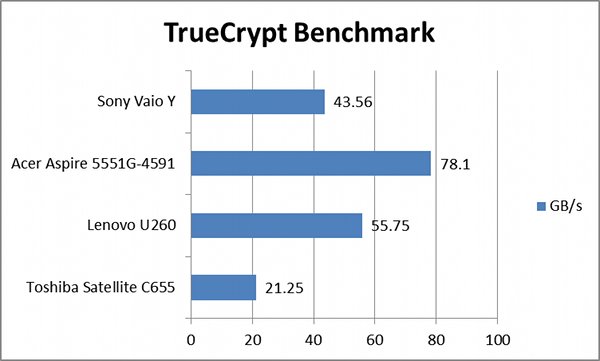 Unfortunately, we no longer have the Atom powered ASUS Eee PC 1201N as a point of comparison, as it pre-dates our usage of these benchmarks in laptop reviews. Our best point of comparison is the Lenovo U260, a recent ultraportable powered by a first-generation Intel Core i3 CULV processor – and the Toshiba Satellite C655, of course.

As you can see, the additional core and slight clock speed increase substantially improves performance across the board. The E-350 proved a great boon to the 7-Zip benchmark, in which the Sony Vaio Y doubled the score of the Toshiba. The E-350 also enjoyed smaller but still significant victories in Peacekeeper, PCMark Vantage and Truecrypt.

However, there is also a large gap between the performance of the Sony Vaio Y and the other laptops available for comparison. The Lenovo U260’s 1.33 GHz Core i3 processor trounces the Sony Vaio Y across the board. This simply reaffirms what the SiSoft Sandra benchmarks told us; this is not mainstream processor performance, even by ultraportable standards.

Now is the E-350’s time to shine, however; we’re moving on the gaming benchmarks. 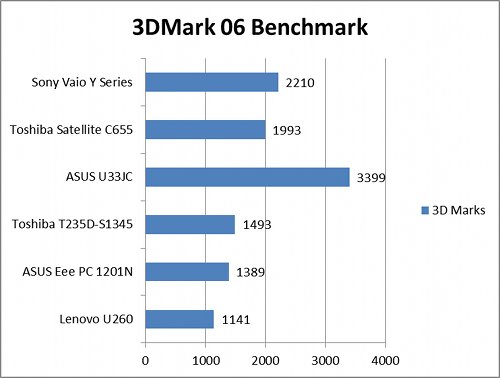 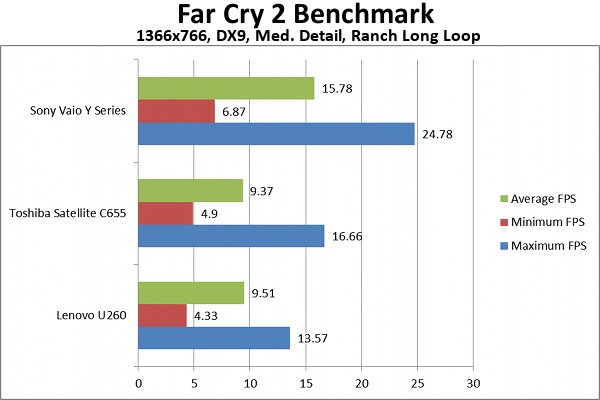 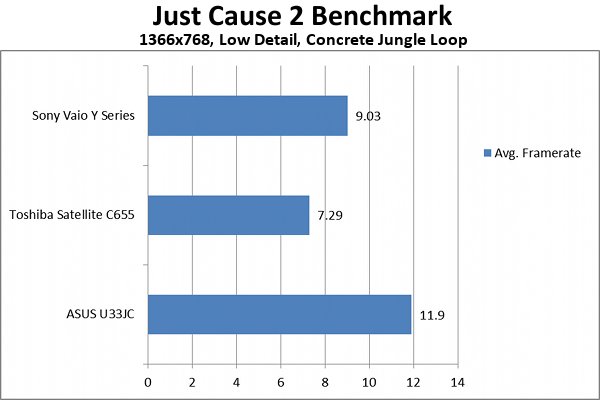 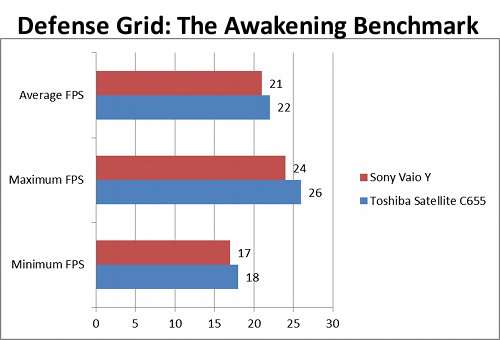 Normally I’d expect two laptops with identical graphics processors to offer very similar graphics performance. The only other component that might have a significant impact on performance is the processor. While the performance the Radeon graphics integrated into the Toshiba Satellite C655 was impressive, I suspected they were being held back by the single-core processor. As you can see from the benchmarks above, this was the case.

The extra processing core we good for an extra 300 points in 3DMark 06, and a few extra frames in both Just Cause 2 and Defense Grid: The Awakening. Far Cry 2 saw the biggest improvement, with the E-350 in the Sony Vaio Y nearly doubling the E-240. Of all the gaming benchmarks, Far Cry 2 is the most demanding on processor performance, so it’s little surprise that its performance would be much improved.

Still, these results are a bit short of what is required to play modern 3D games. The Sony Vaio Y is perfectly adequate for older titles like Defense Grid: The Awakening, but games like Far Cry 2 are only going to be playable if you knock the resolution far below the display’s native capability and set most of the details to low. Although the fact that this would even be playable represents as significant improvement over what netbook hardware used to be capable of, it’s hard to be excited.

In the Toshiba Satellite C655 review I took the unusual step of looking at the laptop’s high-definition Youtube video performance. While HD flash video playback isn’t much of a problem for most modern laptops, it’s still something netbooks struggle with, and that included the Toshiba. Does the additional core put the Sony Vaio Y over the top? 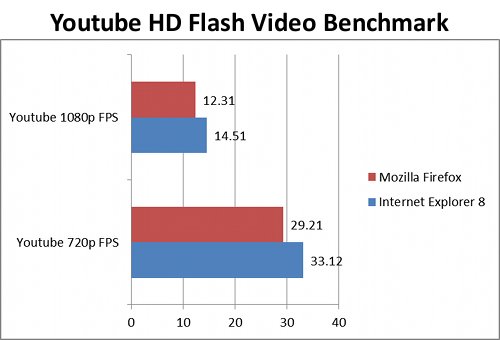 As you can see, these results are much better than what we received from the E-240. The extra core gets rid of the occasional frame stuttering that was evident when playing 720p video on the single-core Fusion variant. 1080p video is still unpleasant, but at least playable.

Let’s wrap things up by looking at boot and resume times. 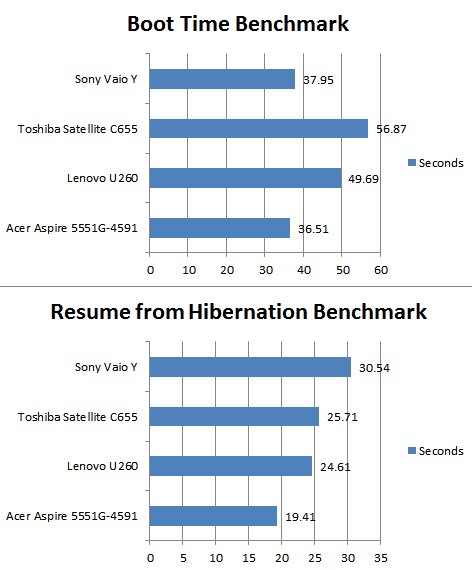 Sony stuffs several pieces of bloatware on the Sony Vaio Y, including an annoying dock that appears at the top of the display and a trial version of Norton antivirus that’s eager to remind you about the dangers of going without a security suite. Despite this, the laptop booted in 38 seconds – nearly 20 seconds quicker than the Toshiba Satellite C655. In fact, the Sony Vaio Y boots quicker than the Core i3 CULV powered Lenovo U260. Resume times weren’t as impressive, however; the Sony Vaio Y’s average resume time of 30 seconds is slower than any other laptop we’ve recently reviewed.