The Phenom II has had a long and active life for AMD.  It is hard to believe that it was over two years ago that the first Phenom II X4 940 came rolling off the lines.  Since then we have seen the clockspeed go from 3.0 GHz to 3.7 GHz.  In this day and age of multi-core CPUs, this is a hefty jump in speed.  We have also seen the max core count from AMD go from 4 to 6 cores on the desktop, and 12 cores at the server level.  45 nm has been a productive node for AMD, and they have milked it for all it is worth.

No matter what magic was done with 45 nm though, overcoming the architectural advantages of the Intel i7 architecture is just too much.  Not to mention Intel being able to transition to 32 nm more than a year before AMD was able to do so.  Even though we will soon see 32 nm parts from AMD, we are looking at Intel introducing 22 nm processors between 8 months to a year from now.  AMD will only be reaching their stride with 32 nm when Intel starts to introduce their next process node. 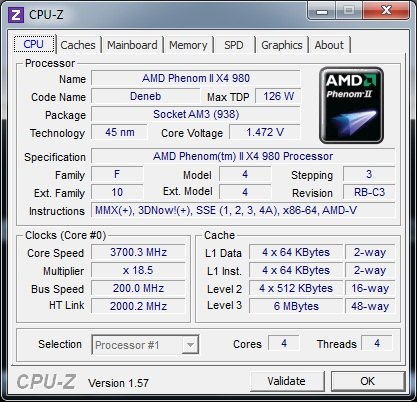 The Phenom II X4 980 is the final and fastest clocked example of this architecture on this process node.  3.7 GHz is still plenty fast, and it is unlikely to hold back most consumers and their workloads.  Add into the equation that it does not pull all that much extra power then previous versions, as well as the X6 products.  It also does not run like a blowtorch when it comes to heat.  The old Phenom 9900 at 140 watts TDP ran much hotter, and that was only at 2.6 GHz.  So there are few physical downsides to this particular processor when considering the clockspeed that it attains.

It is still quite fast in most applications, but it will often take a backseat to Intel processors that are in the same general pricerange.  The one advantage AMD has is again the overall cost of the platform when it comes to features and performance.  AMD essentially sells their chipsets at cost so the prices of the motherboards supporting these processors are often significantly cheaper than a comparable Intel based motherboard.  Intel, on the other hand, enjoys the profits it receives from both their CPUs and chipsets.  Considering their last quarter’s statement, even with the Sandy Bridge issue, the company enjoyed many happy returns.  For the Phenom II X4 980 though, going up against the latest Sandy Bridge parts (namely the i5 2400 and i5 2500/2500K) is a lesson in futility.  While the latest Phenom II comes close to matching the older i7-860, the Sandy Bridge parts just take performance another step forward.  Another contender for a user’s cash is the X6 products.  The X6 1075 is priced $20 less than the 980, and its Turbo Mode is not so far off from the X4.  The 1090T is very tempting at $199, and is quite honestly the better overall processor.

In the end, this is a simple 100 MHz increase in clockspeed for AMD for their high end quad core processor.  It is not all that much faster than the previous X4 975, but at least it does not consume all that much more power than the previous model.  It is a good all-around performer, and would make a solid foundation for a productivity and gaming machine for most users.  Invariably though, most eyes are drawn to the horizon and the promise of Llano and Bulldozer.  Hopefully for AMD these next generation processors will allow them to more adequately compete with Intel when it comes to raw performance.  Until these products are released, AMD will rely on the Phenom II X4 980 and Phenom II X6 1100T to be the standard bearer for their performance level processors.