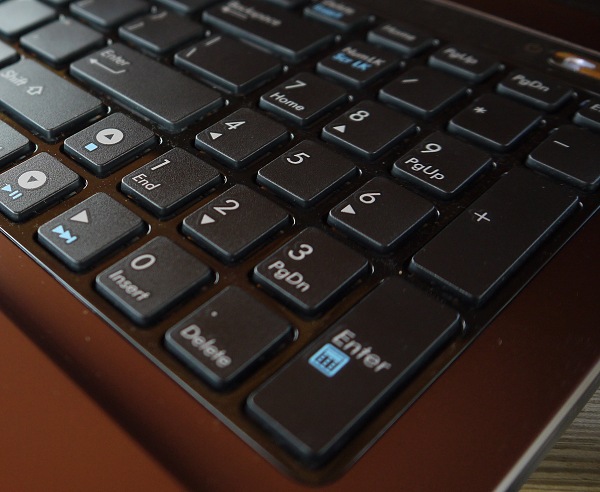 In my recent reviews of both the ASUS N53 and the ASUS Eee PC 1215N I noted that keyboard flex was an issue. Unfortunately, I now must label this a trend, as the ASUS K53E also shows this problem. Even a normal keypress results in significant deformation of the keyboard – nearly as bad what I experienced with the ASUS N53. Visually, the issue is more noticeable because of the glossy plastic surrounding the keys. In any bright room, each small movement of the keyboard is instantly visible.

This problem was excusable on the ASUS N53 and the ASUS Eee PC 1215N, however, because those keyboards otherwise offered decent key feel. That’s not the case with the ASUS K53E. The keys seem to have limited travel when pressed. The keyboard also has the typical 15.6" laptop layout, which squeezes a numpad into the right side. As a result, the keys are smaller than they could be, and the function keys are hardly larger than the keys you’d find on netbook. 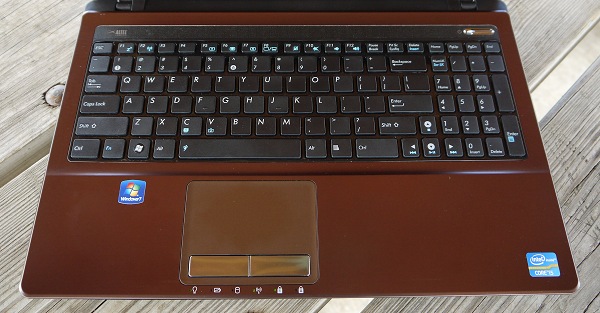 The large trackpad on the K53E is made of smooth plastic that offers little tactical feel, making navigation a chore. There is plenty of room for multi-touch gestures, however, and they work like a charm. Unlike many recent ASUS laptops, the K53E offers two individual touchpad buttons instead of a single button placed on a rocker. These buttons are quite large, and offer much better feel than the rocker-style buttons often used by ASUS.

The K53E is slightly redeemed by its large, comfortable palmrest area. The use of aluminum results in a more luxurious feel, and also wards off the clammy feeling that is produced by long typing sessions on some laptops with plastic interiors. Still the dull keyboard and average touchpad make it hard to forget that this laptop is an entry-level model. 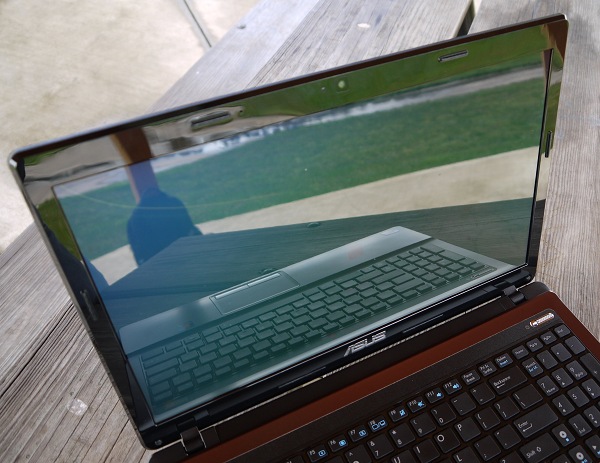 As an inexpensive but powerful laptop, the ASUS K53E needs to make sacrifices, and it’s no surprise that the display is one of the features thrown on the altar of performance. The K53E’s display has a difficult time displaying dark shades of gray, instead choosing to render them as black. This has some negative effects when using the K53E for gaming or movies. Dark scenes can become muddy, and at times almost impossible to view. Other areas of the display, such as viewing angles and white saturation, were on par with other inexpensive laptops.

Gloss coats the K53E’s display from top to bottom, and as usual it causes problems. The backlight on the K53E isn’t particularly bright, so bright environments can easily render the display unreadable. My desk sits next to a window, for example, and with the K53E tilted towards the window much of the display becomes useless. It no longer renders the web page I’m attempting to read and instead reflects the grass and sidewalk outside. 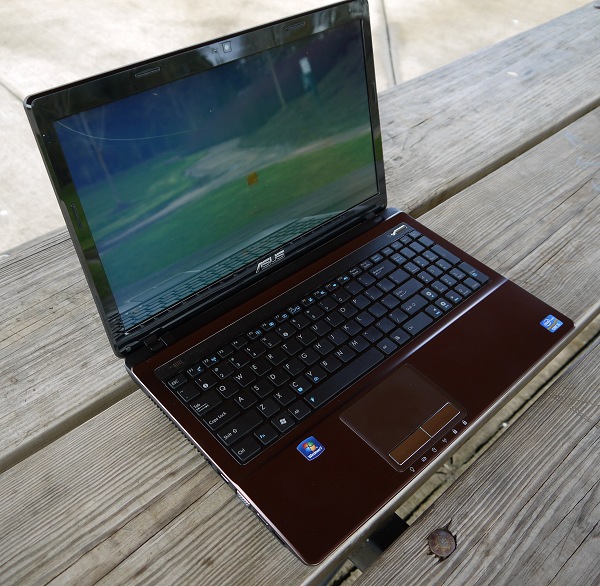 The K53E comes with a small black speaker bar alongside the top of the keyboard with Altec Lansing branding. The speakers offer reasonable sound and volume, and can even handle bass with little distortion. However, I found the sound from them to be distant and muffled, as if the band I was listening to was playing at someone’s house a block down the street. Podcasts and games did not suffer as greatly from this problem, although I imagine that any game with high music production values would also be deluded by the K53E’s unflattering reproduction.

Still, these problems aside, I must once again point out that an alarming number of laptops seem to have trouble playing music at reasonable volume without turning the tunes into a distorted mess. The K53E’s speakers are far from the worst I’ve heard.

Easily backup images with your iPod