There are aspects of the R6970 that mirror that of the previous R5870.  The PCB is much larger than a reference board, and it stands much taller from the PCI-E slot to the top of the card than what is usually allowed in the PCI-E specification.  The board is packed to the gills with high quality power components.  The twin fanned cooler is still present, but is now represented by the Twin Frozr III generation of units. 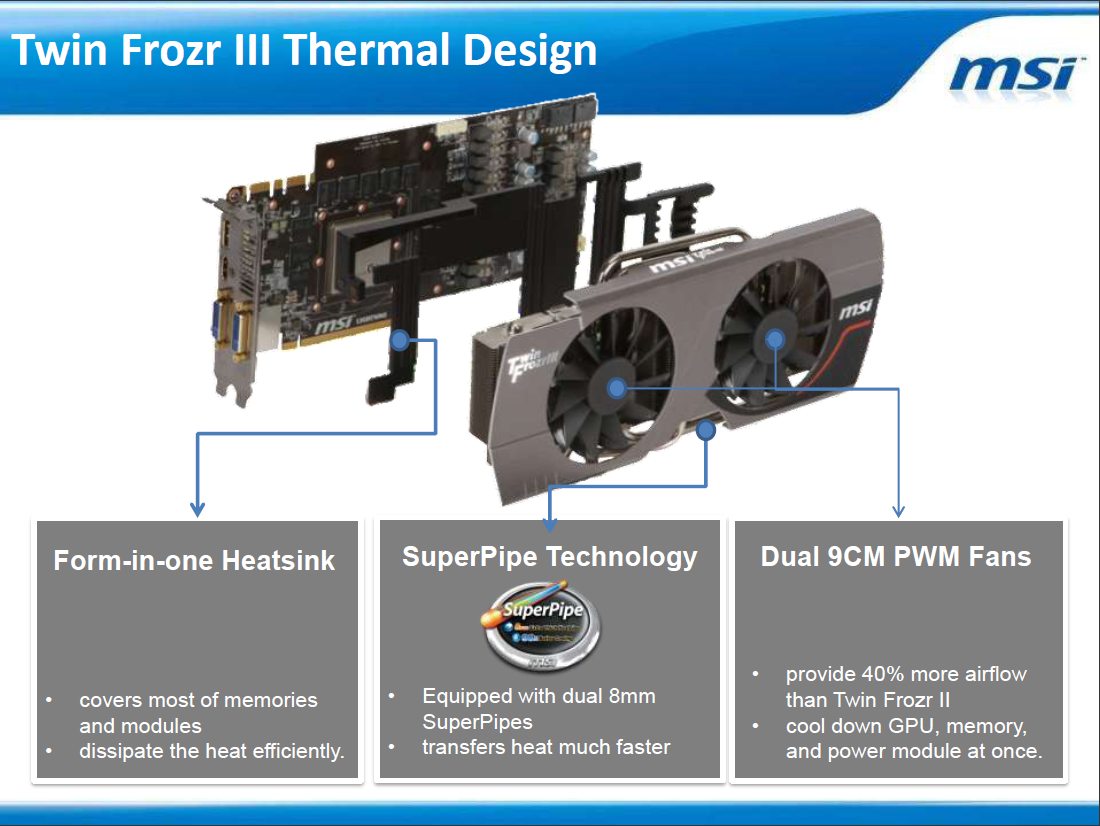 The biggest and perhaps most interesting features of this board are that of the sheer number of PWMs are on the board.  Eighteen to be exact.  Fourteen are for the GPU, three more for the memory, and one is dedicated to the VDDCI (PCI-E connection).  Compare this to the reference HD 6970 with a total of eight PWMs.  The theory behind this is that the GPU can draw more power from more phases, and be able to do it without spikes and dips, all the while keeping the power circuitry running cool.  Spreading the load across more phases should even out power delivery, and as mentioned above keep those components cooler than if there were half of them sharing that same load.  Two PCI-E 8 pin connectors supply power to the card, and instead of the memory sharing power with the PCI-Express connection (as the reference design does) it comes straight from that 2 x 8 pin array.  In theory, because that power is coming directly from the power supply and not through the motherboard, it should feature lower ripple and more stable current.

The actual chips used in this array are not cheap either.  The board features the same Military Class II branding as the top end motherboards in MSI’s arsenal.  Hi-C caps, Super Ferrite Chokes, and solid caps populate the board.  The MOSFETS are actually higher end CopperMOS units which feature a significant amount of copper on both sides of the chip.  The design supposedly allows it to run 20% cooler (per MSI’s technical brief), as well as handle double the amps (from 20 to 40) as a traditional MOSFET.  The second rather unique chip is the Proadlizer.  This chip features high capacitance and low ESR as compared to a traditional liquid or solid cap.  This again should allow for more stable power and better response to changes in electrical demand.

The next big advancement in this board is that of the propeller blade fan.  This really is a unique design, and could contribute more to cooling than most people think.  Airflow is a very complex thing, and the simplest of changes can have drastic effects when we are talking airfoils and fans.  The design has several new components, such as a slightly greater number of blades on the fan as compared to previous versions.  The pitch of the blades have been changes as well, and it is an increasing pitch when going from the tip of the fan to the root.  The leading edge and body of the blade are made of a rough plastic, which I assume generates more turbulence to improve cooling.  However, the tip of the fan is made of a smooth plastic, which cuts down on the turbulence at that area, which is the part which makes the most noise when a fan is in motion (think wingtip vortices).  The overall design *should* improve airflow all the while minimizing fan noise as compared to more traditional fan blades.

Our first good look at the R6970.  Note the massive fans on this number.

The heatsink is cooled by two 90 mm propeller blade fans that are temperature controlled.  The heatsink is a huge affair with three 6mm heatpipes and two of the 8mm “Superpipes”.  The heatsink is a good 10 inches in length and weighs not quite a metric ton.  Underneath this monster of a heatsink lies the “Form-in-one” unit which covers all of the power components and memory modules.  The thermal capacity of these two units should be more than enough for any air cooling application that this board will be used in.  The “Form” heatsink also acts as a stiffener for the board, so it does not bend under the considerable strain due to the weight of the heatsink and the sheer number of components on the PCB.

The board features three voltage check points.  These are used to monitor the GPU, memory, and VDDCI voltages in real time.  There are three sets of switches on the back of the card.  The first, and the most obvious, is the Silence/Performance toggle.  This changes between two different BIOS and not only increases fan speed, but also allows quick unlocking of the PowerTune range.  AMD has implemented PowerTune to insure that the GPU will not pull more power than the PWMs can provide, thereby causing instability and lockups.  This increases the range by 2.5X, and should allow the GPU to consume upwards of 350+ watts without melting itself or the PWM circuitry down (mainly due to there being double the PWMs and double the amperage available).  The other two switches should be used only in LN2 situations.  These increase the power to the memory and GPU far above that of the recommended values.  I would stay away from these if a user was only going for air cooling, or limited watercooling.