The PCB looks to be a 12 layer affair, with three distinct layers for GPU (2),memory and I/0 (1), and ground (1).  This should help to decrease overall resistance and improve cooling.  It also makes for a stiff PCB.

MSI has increased the core clock by a nice amount, but not over the top.  The core is clocked at 920 MHz (40 MHz faster than stock), but the memory is kept at the stock speed of 1375 MHz (5.5 GHz effective).  I was hoping for a faster memory clock than standard, but I guess we get what we can take. 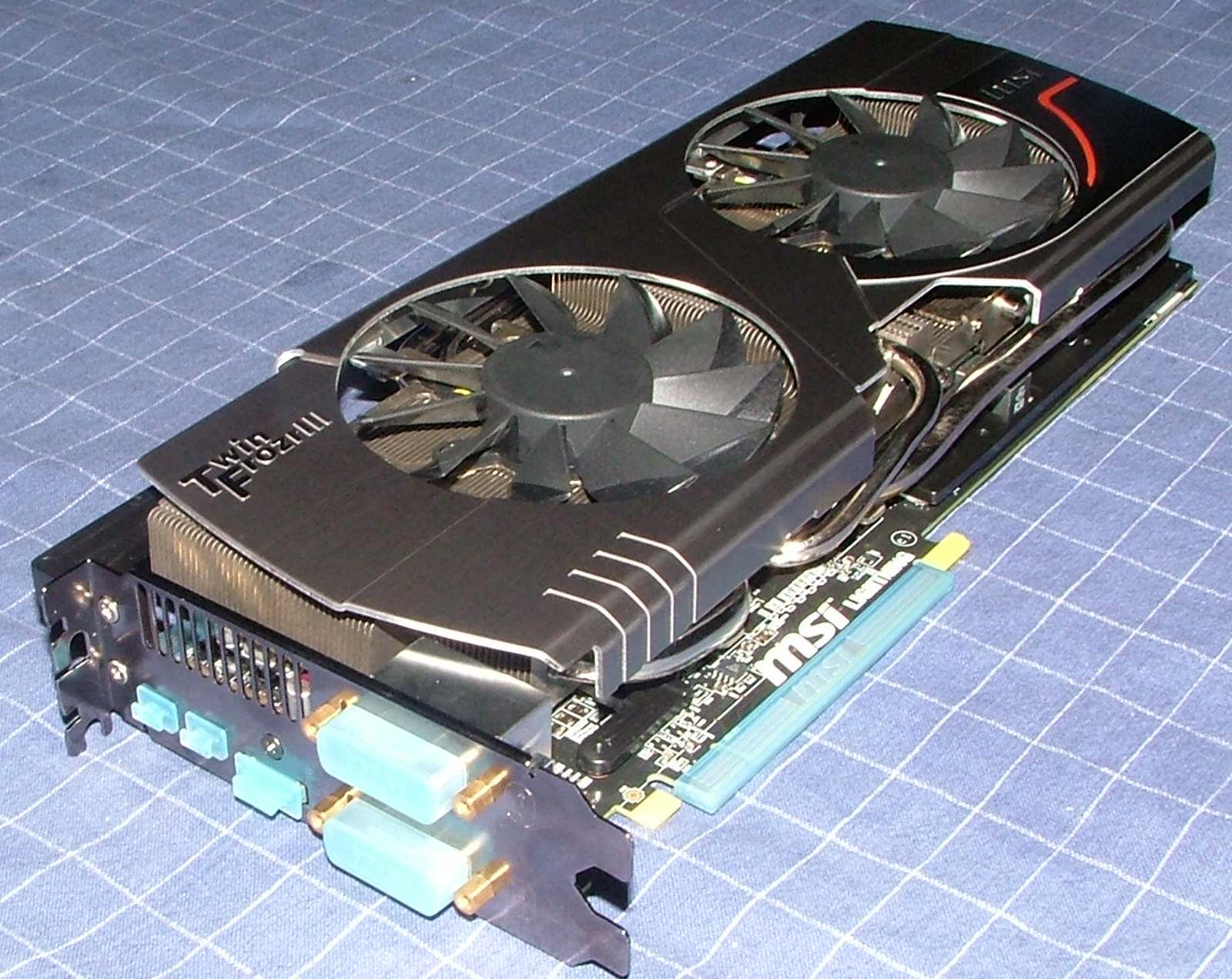 We start to get a better idea of how big this thing is.

The board also sports a grand total of five video outputs.  There are two DVI ports, one of which is dual link while the other is single link.  There is a single HDMI port, which is full sized.  This is then rounded out with two mini-DisplayPort connectors.  These are DP 1.2 connections, so each port, when connected to the appropriate hub can drive three monitors at once.  Or a single port can daisy chain multiple monitors.  For the time being, I would imagine the most common Eyefinity solution will be using the two DVI ports and then using an active mini-DP to DVI adapter to connect to a third monitor.  When using the DVI ports, the user is limited by the single link interface, so 1920×1200 or 1080P will be the max resolution for any single screen.  By paying more and using either the native DP support, or those much more expensive active DB to Dual Link DVI adapters, then three monitors of 2560×1600 can be used.

MSI recommends a 650 watt power supply at minimum, with 42 amps on the 12v rail.  Considering that the two 8 pin PCI-E connectors and the PCI-E slot together support upwards of 375 watts delivered to the card, it is a good bet to get the biggest and best power supply that a user can afford.  Especially if they plan on overclocking this board further (which is what it is designed for anyway).

The box that the R6970 comes in is rather large.  Not quite attaché case large, but certainly approaching those sizes.  One would expect a veritable cornucopia of extras in such a large case, but they would be sorely mistaken.

The box is full of packing, and that is to protect this large and heavy video card.  MSI does pack some decent extras into the box, but this is not the bundle of yore (which frankly, were somewhat over-the-top back in the late 90’s and early 2000’s).  The card is surrounded by thick foam, and then covered by a hard plastic shell.  The card sits very snugly in there, and shipping damage should not be an issue unless something quite extreme happens (let’s say… Paris Hilton driving over it in a Range Rover- sorta like Ryan’s foot when he visited Dubai).

Psst… your Superpipes are showing.

In the box are, in no  particular order: DVI to DB-15 adapter, mini-DP to DP adapter, Crossfire connector, 2 x 6 pin PCI-E to 8 pin adapters, and 3 x voltage monitoring cables.  Also included is a quick start guide, a full guide, and the driver CD.  This should be enough to get most people started, though I would again recommend having two native 8 pin PCI-E plugs coming directly from the power supply rather than using the 6 pin to 8 pin adapters.

Overall the package is sparse, but adequate.