During this morning’s keynote at the AMD Fusion Developer Summit, Microsoft’s Herb Sutter went on stage to discuss the problems and solutions involved around programming and developing for multi-processing systems and heterogeneous computing systems in particular.  While the problems are definitely something we have discussed before at PC Perspective, the new solution that was showcased was significant.

C++ AMP (accelerated massive parallelism) was announced as a new extension to Visual Studio and the C++ programming language to help developers take advantage of the highly parallel and heterogeneous computing environments of today and the future.  The new programming model uses C++ syntax and will be available in the next version of Visual Studio with "bits of it coming later this year."  Sorry, no hard release date was given when probed.

Perhaps just as significant is the fact that Microsoft announced the C++ AMP standard would be an open specification and they are going to allow other compilers to integrated support for it.  Unlike C# then, C++ AMP has a chance to be a new dominant standard in the programming world as the need for parallel computing expands.  While OpenCL was the only option for developers that promised to allow easy utilization of ALL computing power in a computing device, C++ AMP gives users another option with the full weight of Microsoft behind it. 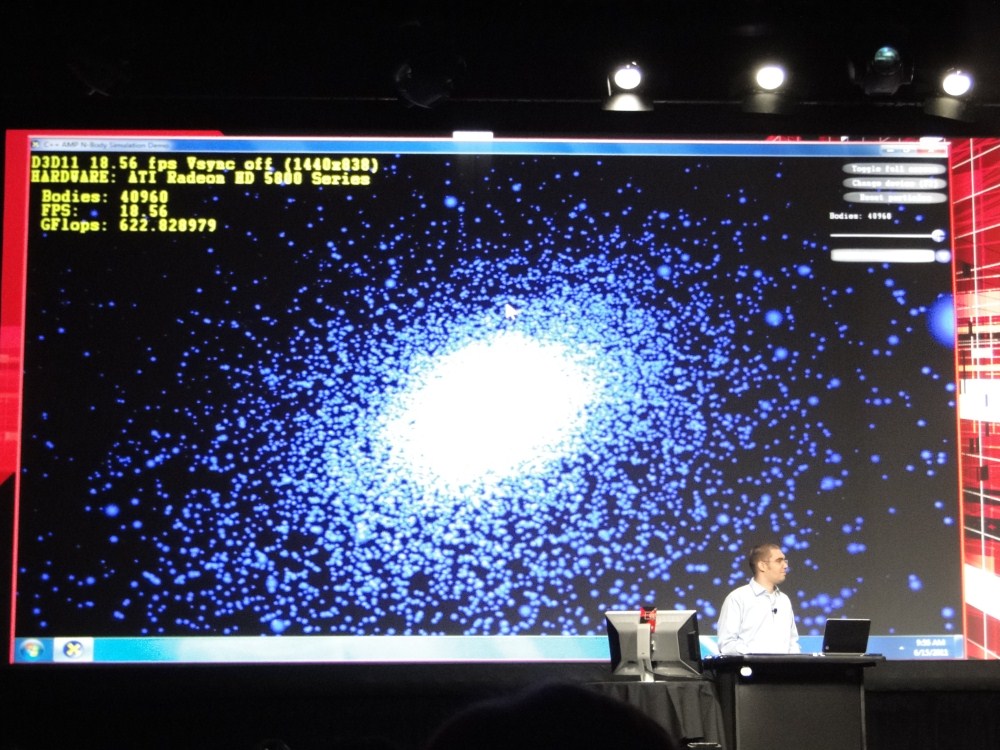 To demonstrate the capability of C++ AMP Microsoft showed a rigid body simulation program that ran on multiple computers and devices from a single executable file and was able to scale in performance from 3 GLOPS on the x86 cores of Llano to 650 GFLOPS on the combined APU power and to 830 GFLOPS with a pair of discrete Radeon HD 5800 GPUs.  The same executable file was run on an AMD E-series APU powered tablet and ran at 16 GFLOPS with 16,000 particles.  This is the promise of heterogeneous programming languages and is the gateway necessary for consumers and business to truly take advantage of the processors that AMD (and other companies) are building today.

If you want programs other than video transcoding apps to really push the promise of heterogeneous computing, then the announcement of C++ AMP is very, very big news.