Last year Asus introduced the TUF series of motherboards which eschewed a lot of the over-the-top features and instead embraced a simpler design, but with very high quality components and a penchant for high clock speeds.  The boards were characterized by earth tones throughout the design, as well as the use of high efficiency/high amperage electrical components. 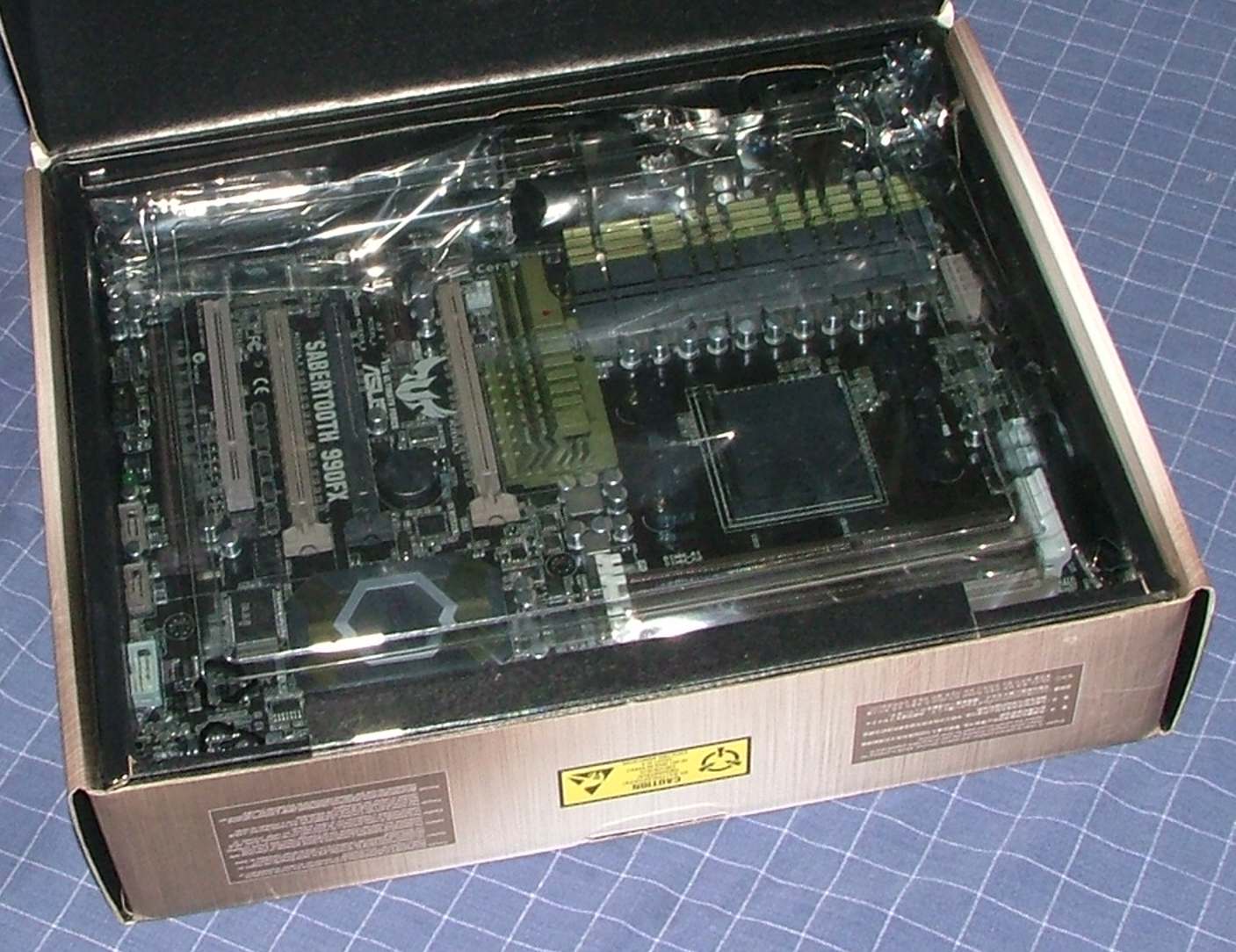 The SABERTOOTH (I so want to type SABERTOOF) is nicely packaged in mostly recyclable material.  I hear Ryan Shrout doesn’t believe in recycling OR the tooth fairy.  Fool.

The defining feature of the boards has to be the unique heatsinks used to cool the components.  Instead of a full metal/alloy unit, these are metal sinks with a ceramic covering.  Usually ceramics are used as insulators, so this is confusing to some.  But not all ceramics are insulators though.  In this case the ceramics used in these designs conduct heat fairly well, but the biggest advantage is the very uneven microscopic surface features which increase overall surface area as compared to standard metal/alloy heatsinks.

Asus goes for much of the same type of component choice as MSI does with its Military Class II, with the exception of not using the tantalum (Hi-C) caps that MSI chooses to.  This is not a ding against Asus, as I would expect their capacitor choice to be as long lasting as the MSI board, considering the age of the technology when those polymer caps fail in about 7 to 10 years time.  Asus is so confident in their design that they offer a full 5 year warranty on this motherboard, which is unmatched at the consumer level. 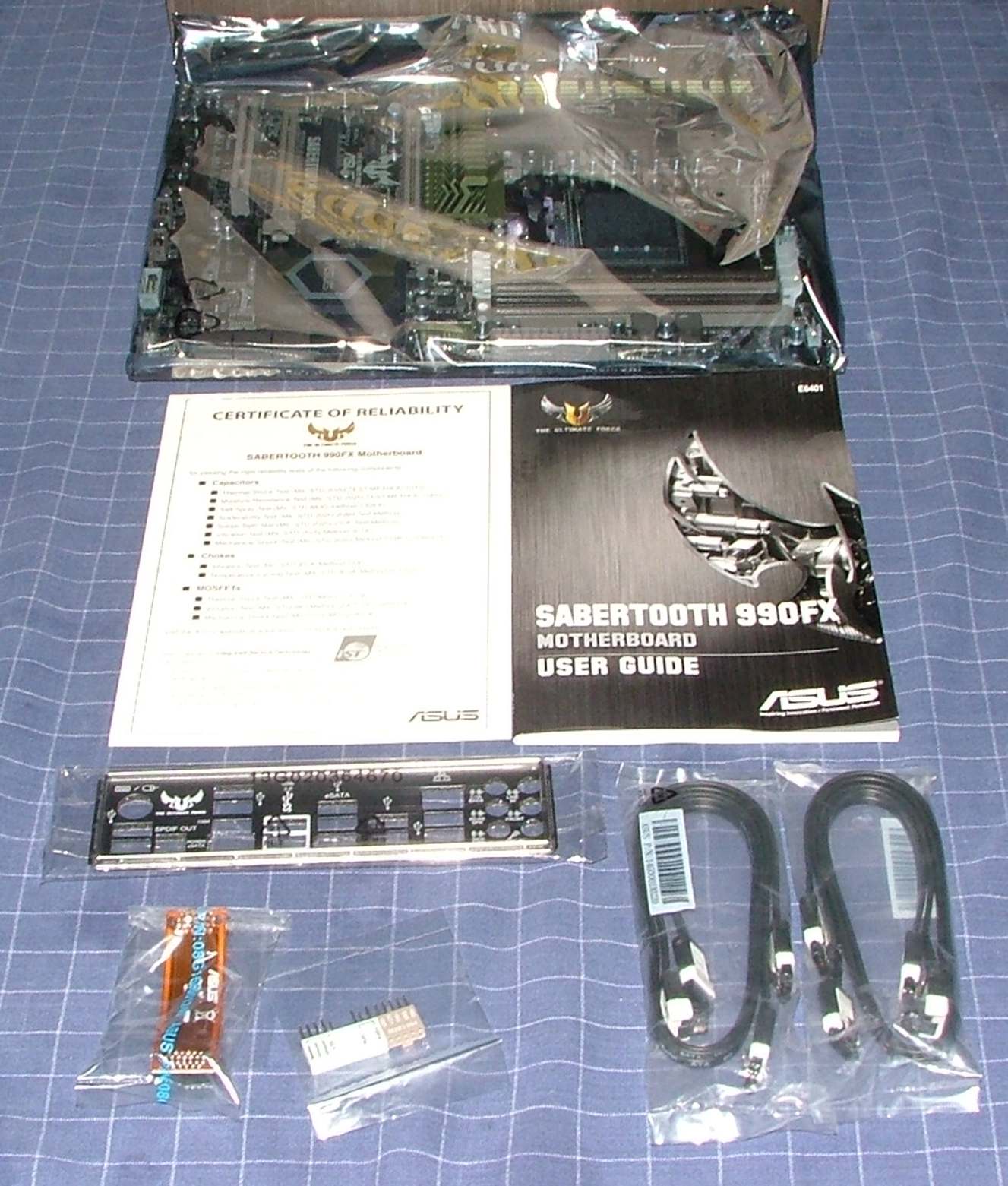 Sparse?  Spartan?  I would go with spartan, especially considering the color palette.

I mentioned before that motherboards are no longer simple products.  The complexity of these products at this point in time is intimidating to reviewers.  So many features are usually included it is hard to cover them all adequately.  So let us start from the bottom up.

Asus includes a very polished UEFI BIOS which allows for a simple EZ-Mode for basic power and overclocking features.  Then it offers an advanced mode that allows the user to adjust everything under the sun.  What is fantastic about the BIOS is the inclusion of pretty detailed descriptions of what each setting does.  Users can get a good idea of what they should and should not tweak, depending on the complexity of the description.  The BIOS is very responsive and the use of the mouse is nicely integrated.  I did find one issue.  For some reason when I first got into the BIOS, my mouse cursor would be drawn to the lower right corner of the screen.  With a lot of work I could get into the advanced section, but I thought the BIOS implementation was bugged.  Turns out I had a joystick plugged in and the UEFI BIOS was recognizing that as a mouse.  Just so happens that un-calibrated joystick is not perfectly centered, so the BIOS thought an input device was moving the mouse cursor down and to the right.  Once the joystick was unplugged, the wandering pointer issue was resolved. 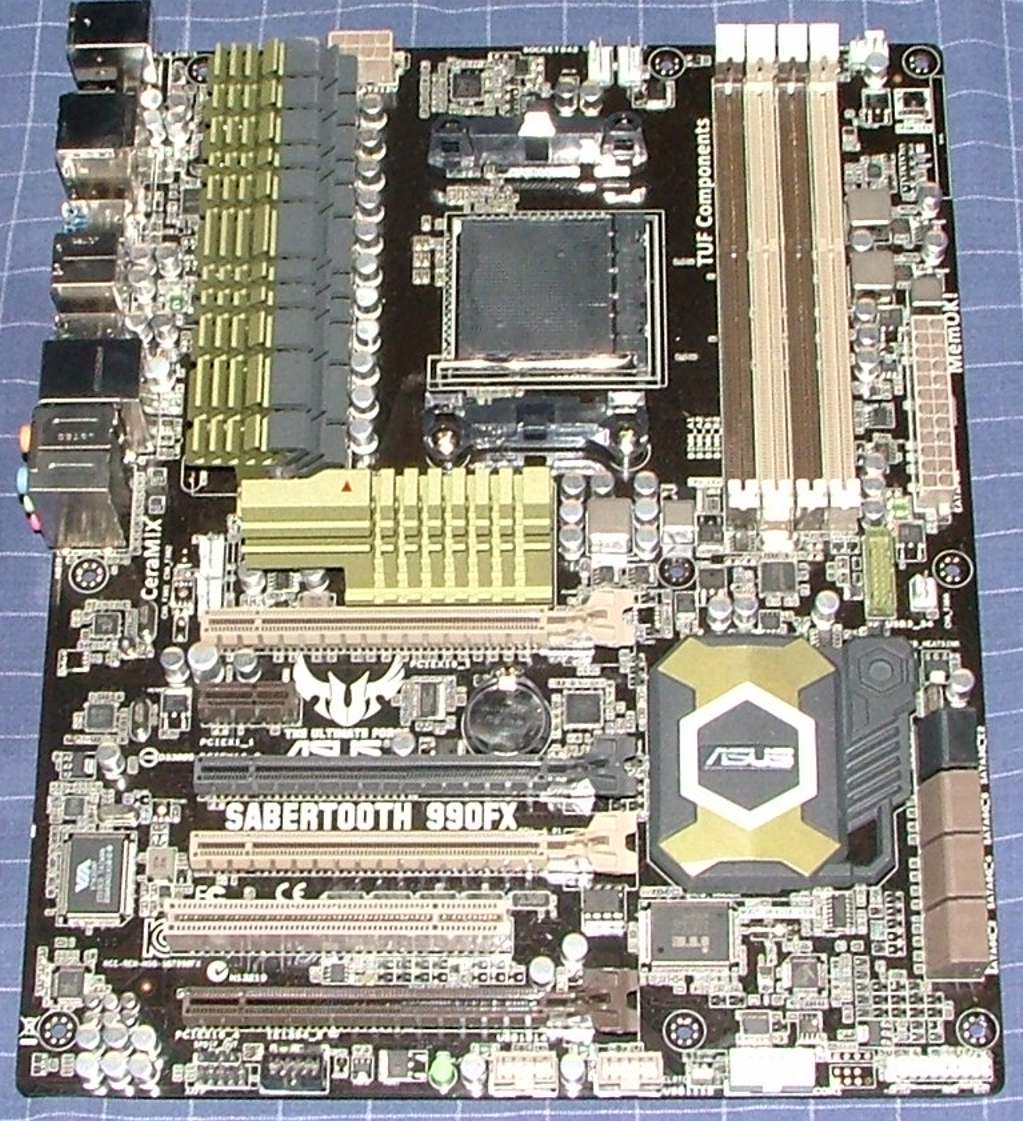 The colors really work for this board.  Not garish, but really unique and with a feeling of, "Let’s get down to business, shall we?"

The board features the Digi-VRM technology which dynamically adjusts the power characteristics being delivered to the CPU.  This supposedly improves overall efficiency by providing just the right amount of power to the CPU, thereby cutting down on heat and wasted power.  Plus it can ramp up power very quickly when the CPU state changes in just a few nano-seconds.

The board obviously features the 990FX northbridge and SB950 southbridge.  It also features two ASMedia USB 3.0 controllers, which power two USB 3.0 ports in the back of the motherboard, and two ports provided by an internal header.  It is unclear if this is a licensed NEC/Renesas design, or if it is designed in-house by the Asus subsidiary.  Regardless, Asus claims that it is a faster solution than the ETron or NEC products.  The board also has two JMicron SATA-3G controllers, which provide e-SATA support, as well as two extra SATA connections internally.  Audio is handled by the Realtek ALC-892 chip, while Gig-E is provided by the Realtek 8111 PCI-E controller.  While this is a nice collection of parts, it is not fantastic.  Asus does not provide the X-Fi Supreme software functionality for the SABERTOOTH as it does for the Crosshair series, nor does it use a higher end Ethernet controller.