Last year I was able to review the MSI 890FXA-GD70 and I came away pretty happy with the board.  It was not quite at the level of the Crosshair IV Formula, but it was well within spitting distance.  It had a lot of unique features for the time, and it was a favorite of many users due to its combination of price, performance, and outstanding bundle.  Expectations for the 990FXA-GD80 were high, to say the least. 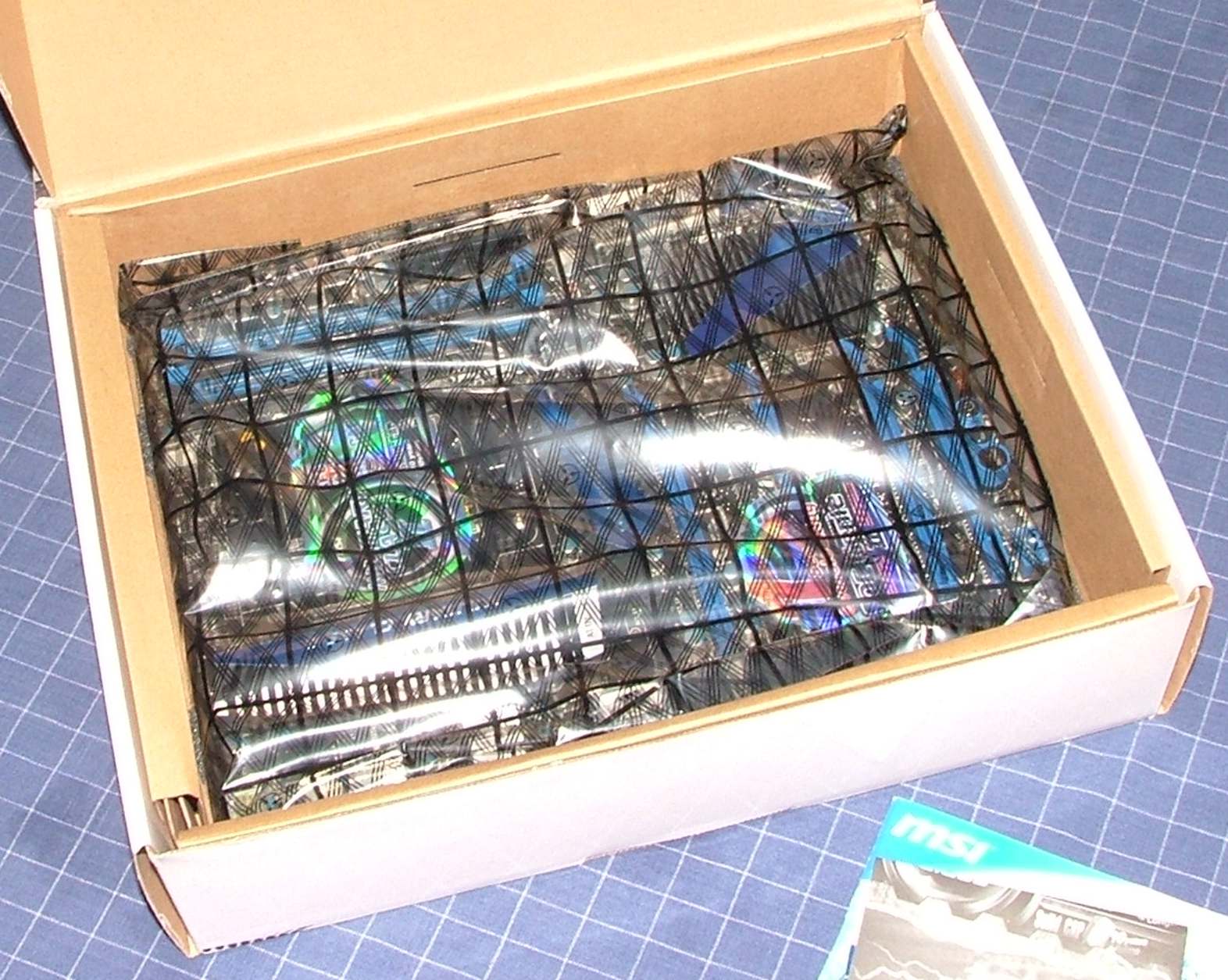 Fret not, a new camera is on the way.  Expect far better photography soon!

The board itself mimics the overall layout of the older GD70 board, but it has a few new twists.  MSI redesigned the VRMs supplying the CPU, and it is now a DrMOS 8+2 phase array instead of the older 4+1 setup of the GD70.  In the last generation of products having a 4+1 setup was not a bad thing, especially when using a DrMOS setup.  DrMOS is an integrated driver IC plus top and bottom mosfets in one chip package.  These are more expensive than a traditional, non-integrated setup, but has the advantages of being able to handle higher currents and being matched very well electrically.  This updated unit now matches, and perhaps exceeds, that of other offerings.

MSI populates the board with “Military Class II” components, which are essentially tested and rated for higher temperatures and power loads than standard units.  This includes the previously mentioned tantalum “Hi-C” caps powering the CPU.  These have a lifespan of around 10 years at 125C, so basically the rest of the board will fail before these caps do. 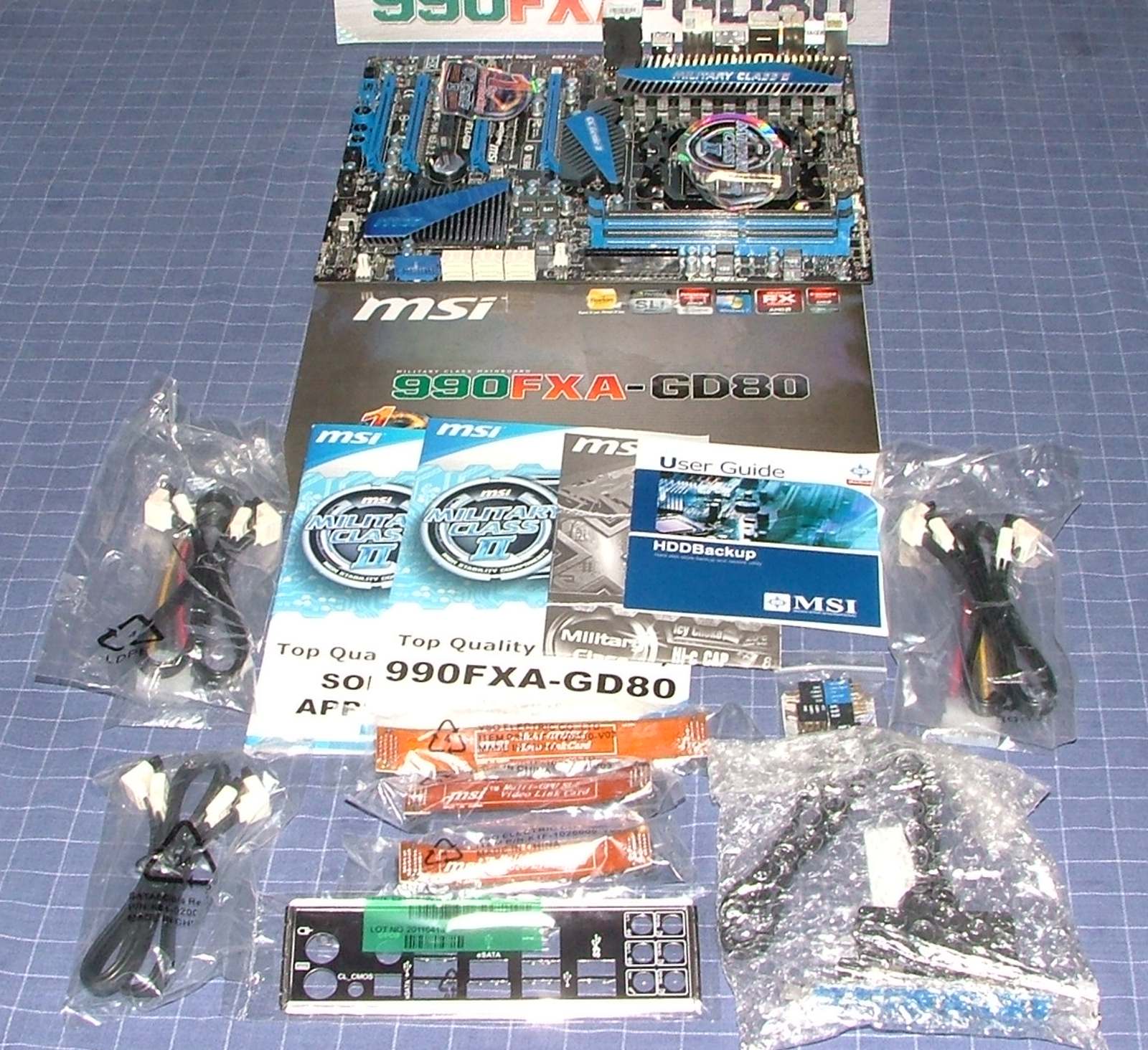 Now that’s what I call a spread.  Can I say that on the internet?

The coolers for the VRMs and northbridge are attached via a heatpipe.  There is some controversy that the VRMs will heat up the northbridge, but considering that the VRMs run pretty cool anyway this is essentially a non-issue.  These are not ceramic coated, and they do not feature any fans or other cooling mechanisms.  Temperatures never became all that great in the first place, and they remained warm to the touch even under load.

The board of course has the 990FX and SB950 chips.  These are then supplemented by a pair of NEC/Renesas USB 3.0 controllers.  One powers the back panel ports, while the other supports the rotated internal header.  Gig-E uses the Realtek 8111 controller, while the ALC-892 handles the sound.  Unlike Asus, MSI is bundling a “THX Studio” sound layer which improves the quality and functionality of the sound codec.  Opinions will vary on the usefulness of the software, but it is a nice extra to have.  Unlike the Asus board, MSI only has one secondary JMicron SATA-3G controller, and that handles the e-SATA connectivity.  It must be said, no matter which board has them, the JMicron controllers are pretty awful when it comes to performance. 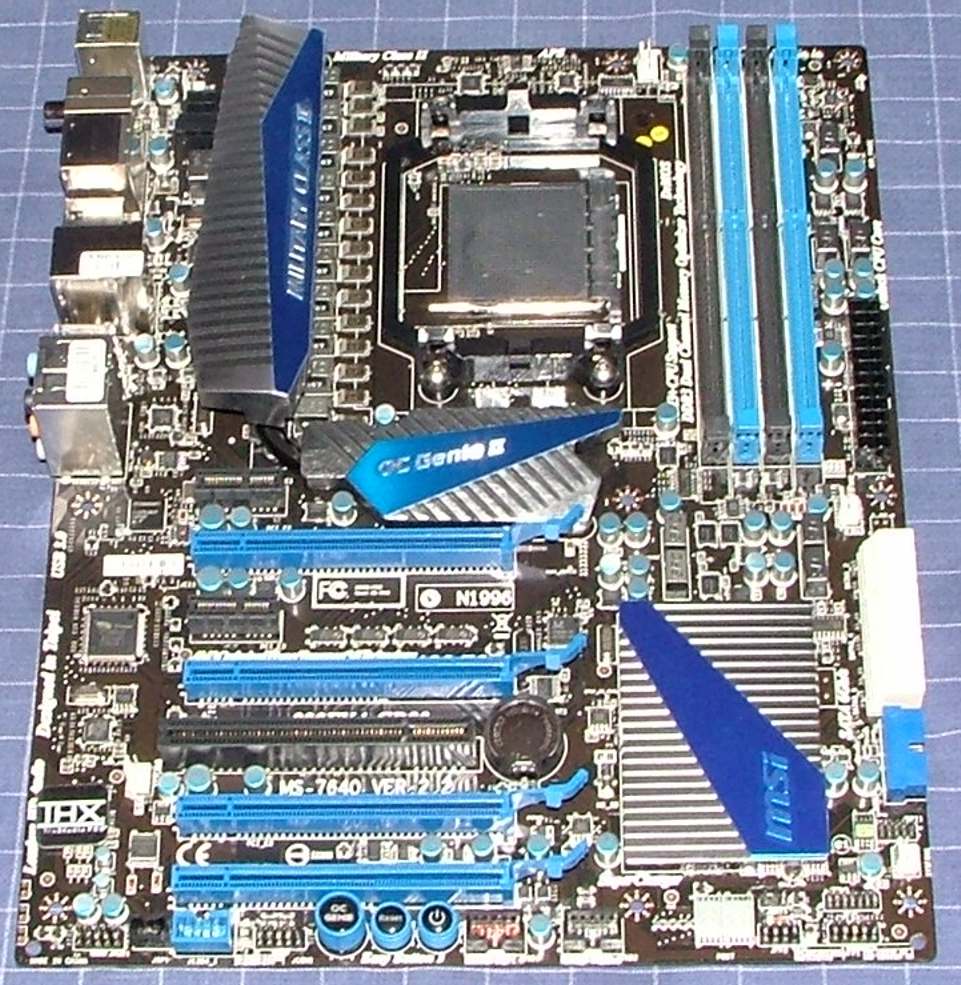 Note the judicious placement of the slots.  Even in SLI or Crossfire and dual slot cooling, both the PCI and PCI-E 1X slots are ready to be populated.  Unless you are using a quad slot cooler…

An LED numerical indicator is included so users can diagnose BIOS or startup issues.  Once the board is up and running, the LED shows the current temperature of the CPU.  This is a handy little thing, and one that is appreciated on a couple different levels.  MSI also has LED lights around the board which report on how many VRM phases are active.

At the bottom of the board are three buttons.  Unlike the GD70 with its touch sensitive pads, MSI is going back with the physical buttons.  There are only three, and MSI has gotten rid of the dial overclocking knob, which when activated increased the base clock speed of the board.  OC Genie has evolved to OC Genie II, and MSI claims that it will overclock the board in around one second.  Pushing the OC Genie button and then booting up the machine will theoretically find the maximum stable overclock of the processor and memory.  Unfortunately, it does not quite work that way.

Yet Another AN8 Review