Memory Speed and its Effect on Graphics Performance

If you were curious like I was, you probably noticed that AMD is claiming support for DDR3 memory speeds as high as 1866 MHz.  And while the 1866 MHz spec is only actually supported with one DIMM in each channel, that is significantly higher than the 1333 MHz speed that Intel’s Sandy Bridge processors (and AMD’s own previous processors) run at by default.  Considering the memory controller on Llano and Phenom II are at the least VERY similar to each other (with some modifications made for support of the SIMD array that is the GPU) it begs the question of why AMD would want to push the line that far.

As it turns out, there is a very good reason for it.  A much smarter man that I once said that GPU performance can and does scale nearly linearly with memory bandwidth, all else being equal.  You can always build a GPU with enough shaders to handle more available memory bandwidth.  Consider that the AMD Radeon HD 6970 2GB graphics card has an available bandwidth of 176 GB/s to its discrete GPU while, as you saw on the memory benchmark in our SiSoft Sandra results, the AMD A8-3850 was rating at about 14 GB/s with a theoretical peak of ~ 29 GB/s according to AMD’s own documentation.  That is much lower than even the slowest discrete graphics cards (64 GB/s on the HD 6670) and is why even seemingly benign increases in DDR3 memory speed on the AMD APU can result in some impressive and noticeable changes.

For this test we ran our Corsair Dominator DDR3 memory modules at three settings:

We ran the same graphics performance tests as we did on the previous page at the exact same settings to see if overclocking our memory would actually make a playable difference in the games.  Turns out it does.

Just to be fair, I also decided to take the Core i3-2100 processor with the HD Graphics 2000 and try it at both the 1333 MHz setting and the 1600 MHz overclocked option to see if the Intel platform might scale as well.  Details below! 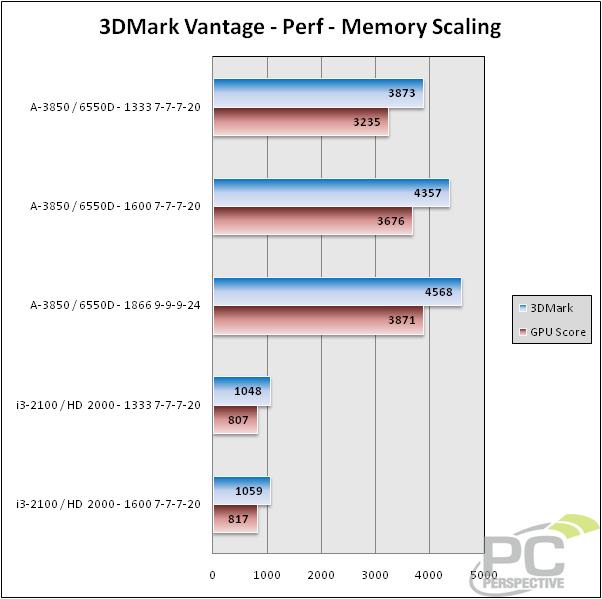 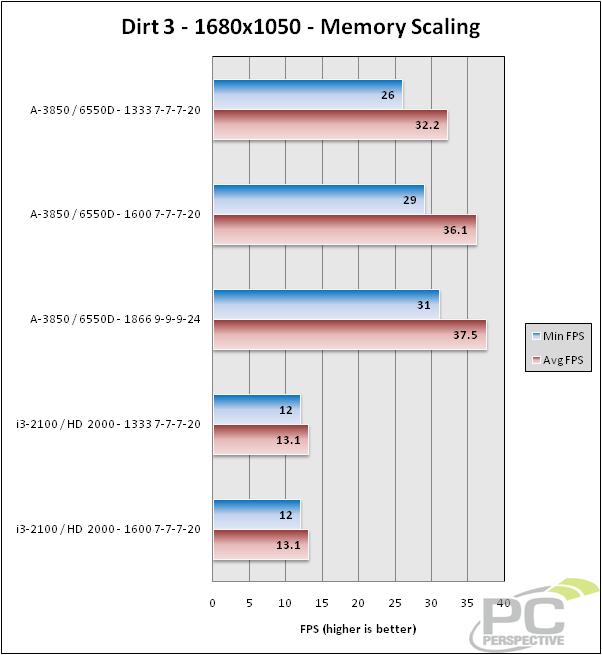 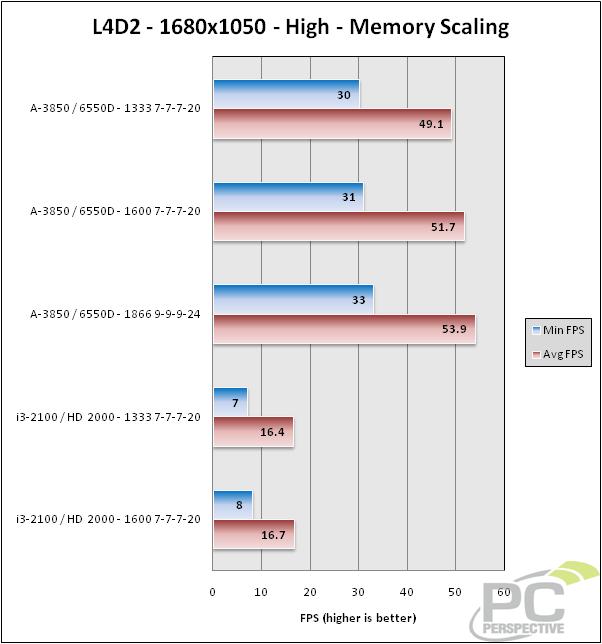 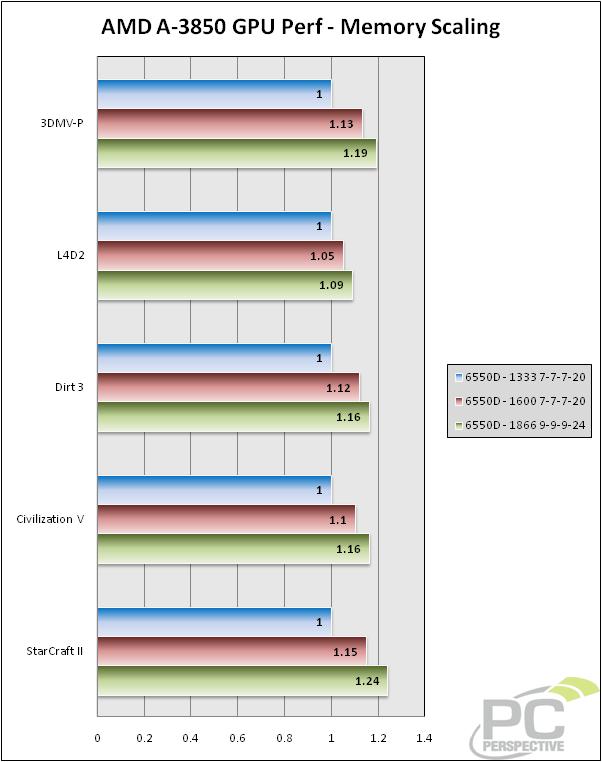 First thing to notice – the Intel Core i3 processor’s gaming performance did NOT scale as we increased the memory speed on the platform.  The fact that AMD’s did improve then indicates a much different memory system at work between the processors.  It was well known that Intel’s use of a shared cache between the CPU and GPU has helped it boost its performance over previous generations but it seems that AMD’s tactic of allowing the GPU direct access to memory might have its advantages as memory technologies improve as well.

Look at those AMD results, the differences are actually quite impressive.  The boost from 1333 to 1600 MHz produced the most dramatic results though the jump to 1866 MHz (but at slightly slower timings) still brought performance up.  The fact that we got a 25% boost in gaming performance in StarCraft II and 16% gains in both Dirt 3 and Civ V means that making a few basic changes to your Llano system can result in tangible and worthwhile gaming advantages.

This also means a return to the world of memory overclocking that many of you might have thought was gone for good.  The days of recommending "overclocking" types of memory for me were previously over as I found myself telling people that stock 1333 MHz memory was good enough and overclocking didn’t result in many performance gains.  Now, if you are buying an AMD A-series system and can get higher speed memory for the same or similar pricing, it seems like a no brainer to go that route and take advantage of these findings.