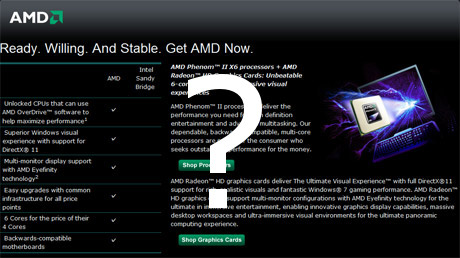 No matter that AMD claimed to be "Ready, Willing and Stable" when the Cougar Point SATA problem was discovered, the market share numbers show that they were not.  Intel’s market share grew in the first quarter by 1.6% from last quarter and a 25% increase in revenue when compared to the first quarter of 2010.  That is a bit of a surprise to many tech enthusiasts who expected a drop in market share for Intel or at the most a stable quarter.  It would seem likely that laptop sales, which for the most point avoided the bad SATA ports, helped as well as the various motherboard vendors quick assurance to customers that any and all bad boards would be replaced.  The Inquirer broke the news here.

You sure about that?

"CHIPMAKER Intel came out of its Sandy Bridge chipset recall smelling like a rose, managing to increase its share of the chip market in the first quarter of 2011.

Following the launch of Intel’s Sandy Bridge architecture at CES in January, the firm was left to announce the embarrassing recall of eight million or so Cougar Point chipsets after a bug was found in its SATA controller. At the time The INQUIRER said that Intel handled the recall well by taking a proactive approach, something that Isuppli’s figures confirm."

Hurrah for the CBC and the Plains of Abraham