Temperatures inside the Lenovo ThinkPad X1 hover around 45 degrees Celsius at idle, and stress testing was able to coax those figures as high as 71 degrees Celsius. That’s certainly warm, but also not surprising. Most thin laptops have to deal with heat generation, and a maximum of 71 during an intense workload is reasonable.

Also reasonable is the fan noise, which even during maximum load refused to utter more than a light, consistent sigh. While the X1 could have been made cooler with a quicker, noisier fan, I think the current balance is the right choice.

External temperatures remain cozy during light use, such as word processing. Both the laptop’s palmrest and underbelly feel a little warmer than ambient temperature, but not enough to induce sweaty palms. Kicking up the workload makes the bottom uncomfortably warm for lap use, and also results in a noticeable increase in warmth along the interior including the keyboard.

Connectivity on the X1 is a bit weird. On the left side you’ll find a headphone/mic combo jack and a USB 2.0 port, but they’re covered by a strange flap that swings out to provide access. This was obviously included to keep the X1’s design smooth, but this seems like a component that will break easily, and it’s not convenient. On the right side you’ll find a card reader along with a door for removing the hard drive which is secured by a single screw.

The rest of the ports are found around back. This includes a USB 3.0 port, a USB /eSATA combo port, HDMI, Displayport and Ethernet. There’s also another flap which hides a slot for a SIM card, making the X1 usable with mobile data plans from major carriers. 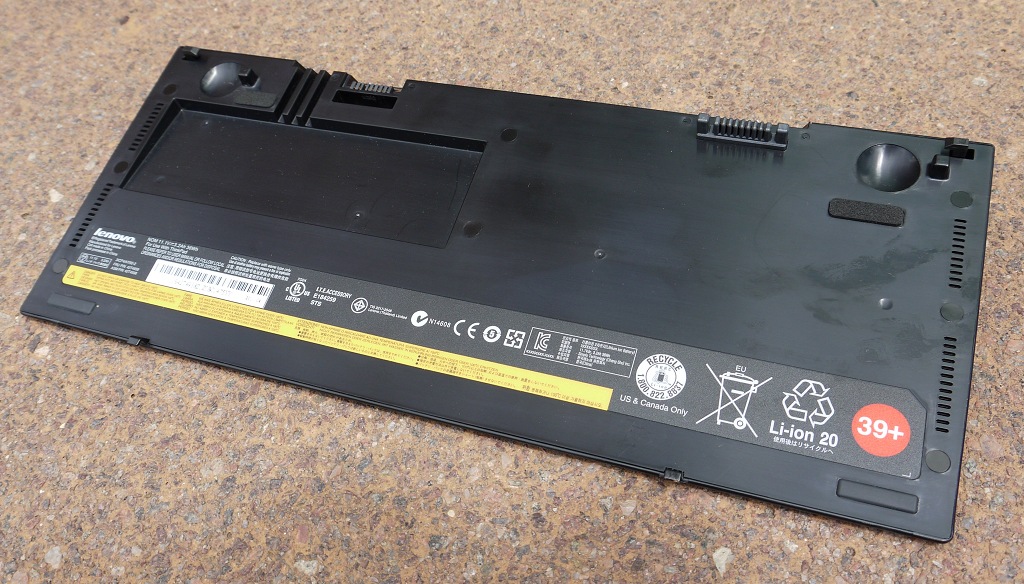 Given all I’ve said about the Lenovo ThinkPad X1’s thin profile, it should come as no surprise that it makes for a very portable laptop. The thin profile, moderate weight and modest display size make the X1 easy to carry. It easily passed the “where’s my laptop?” test – when placed inside my backpack, I couldn’t tell any difference in weight just by picking the bag up. 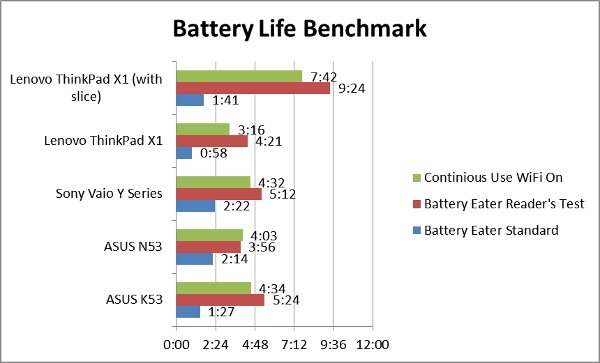 The battery life results weren’t particularly strong, an unfortunate but predictable result of the X1’s small 38 Wh battery. There just isn’t enough room for a beefier unit and the impressive hardware the laptop carries. As a result, the X1 lasted just under an hour in the Battery Eater Standard benchmark and was good for three hours and sixteen minutes of continuous use with WiFi on. This continues a trend of poor battery life from Lenovo laptops equipped with their standard battery.

Road warriors who want the X1 but also need more battery can try the extended battery, which offers an additional 36 Wh of capacity. This roughly doubles the battery life of the X1, and the slice also elevates the keyboard, which creates a typing angle that some will find more pleasurable. However, the slice’s latch mechanism feels flimsy and the materials are of much lower quality than the X1 itself.

While you may run out of battery life quickly, charging should be no problem thanks to Lenovo RapidCharge. The stock battery went from 5% to 100% in just 42 minutes. If you can find a power outlet you’ll have your X1 back up and running quickly.