Lenovo’s ThinkPad X1, despite its size, isn’t equipped with an ultramobile processor. Instead the review unit has the same Core i5-2520M processor that can be found in full-sized laptops. The fact that Lenovo is able to fit such powerful hardware into this chassis is evidence of the engineering thought that went into the product’s development.

The Apple MacBook Air, by comparison, still gets by with an ancient Core 2 Duo. Even the Samsung Series 9 has to make do with Intel Core ultramobile processors. Although we haven’t had chance to test either of those products, it’s not unreasonable to say that the Lenovo ThinkPad X1 is in different league of performance given the significant hardware gap.

Let’s dive right in to the SiSoft Sandra processor benchmarks and see what the X1 can do. 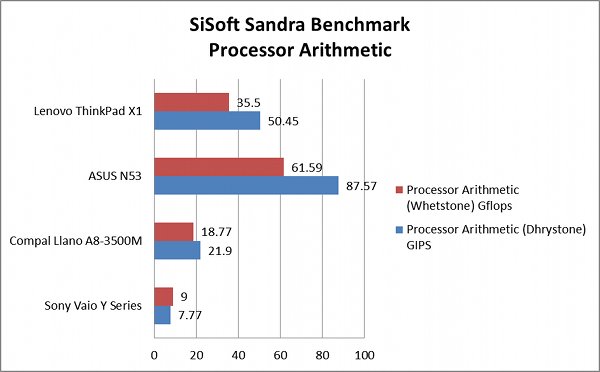 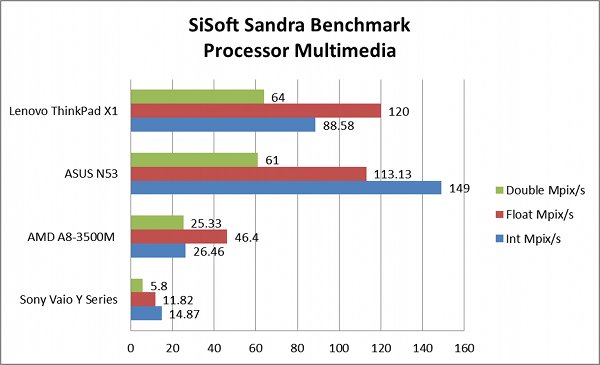 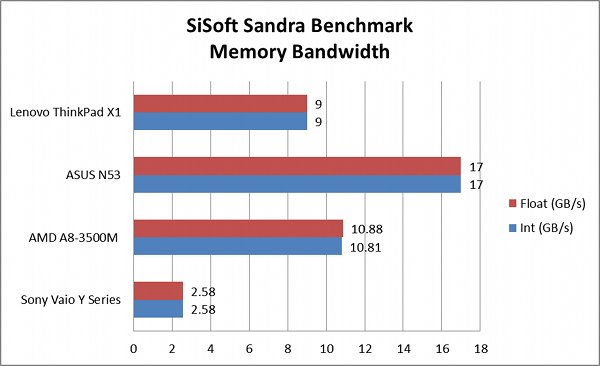 The raw processing power of the X1 is hard to ignore. Intel’s Core i5 remains significantly faster than the new A8-3500M quad-core from AMD despite being down on two cores and crammed into a chassis with little thermal overhead. Although the X1 obviously can’t catch the faster quad-core Sandy Bridge in the N53, the gap between them is sometimes smaller than one might expect, such as in the Processor Multimedia benchmarks.

Judging the processor in isolation provides only limited information, however. Let’s take a gander at the general application benchmarks. 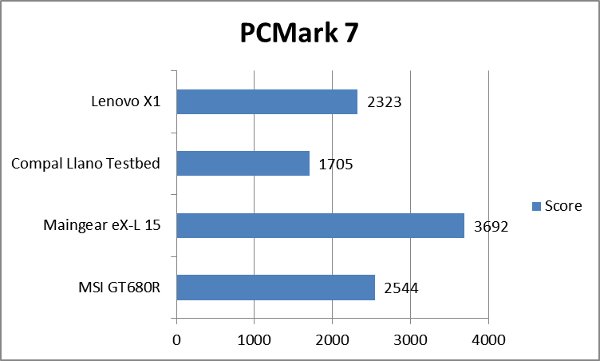 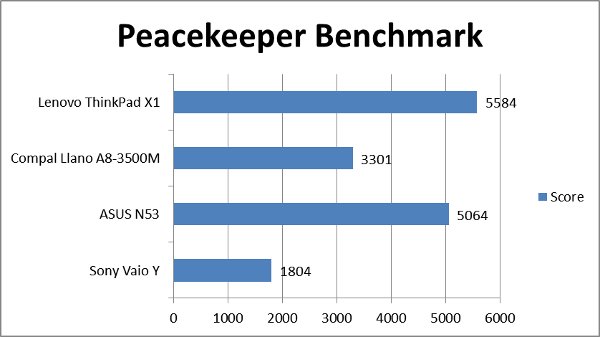 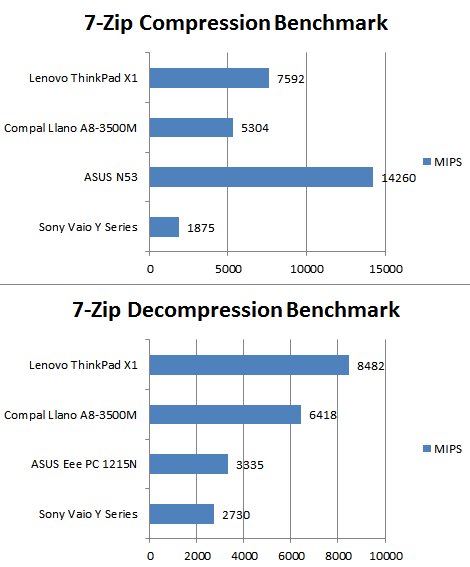 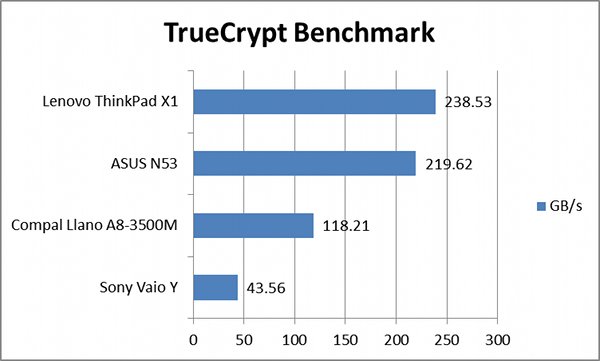 Again, the processor strength is readily apparent. The X1 scored extremely well in 7-Zip as well as the Truecrypt and Peacekeeper benchmarks. The high PCMark 7 score, however, is also telling of the laptop’s general strength. Although the processor is the highlight, the X1 tested did come equipped with a speedy 7200 RPM drive as well as 4GB of RAM, which round out the product nicely.

Of course, the X1’s Core i5 also comes with Intel HD 3000 graphics. Let’s see how it holds up in our 3D gaming benchmarks. 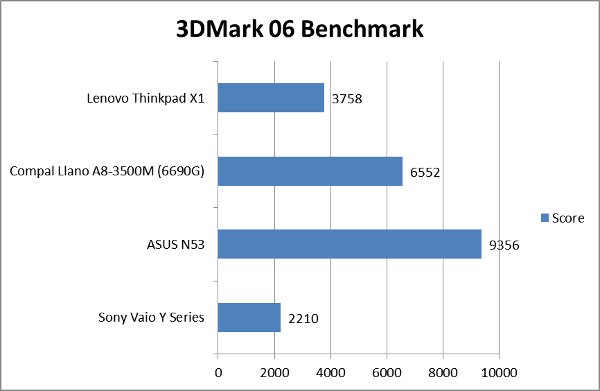 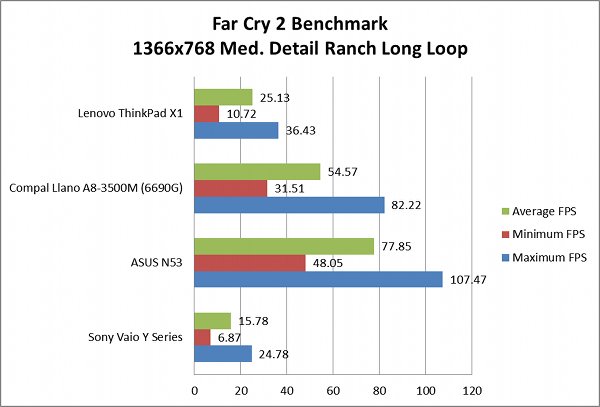 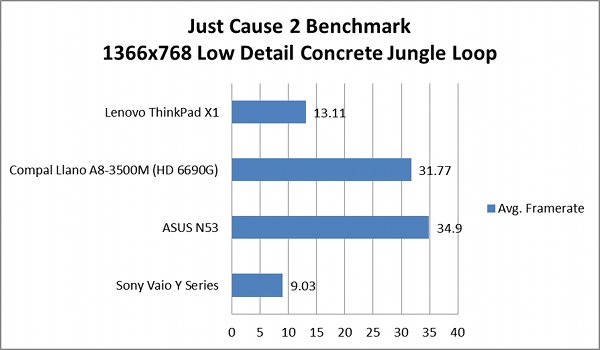 While the X1 is no slouch compared to Intel IGP equipped laptops of old, it’s clearly at a disadvantage in this comparison. The performance is only somewhat better than that provided by the AMD Fusion E-350 powered Sony Vaio Y, and clearly can’t match what’s provided by AMD’s new A-series Fusion APUs or a laptop equipped with Nvidia discrete graphics.

With that said, however, Far Cry 2 actually was playable with the settings at low (we test at medium) and I had no trouble playing a handful of less demanding games including Defense Grid: The Awakening at low or medium detail. HD video playback was also fluid, so while the X1 may not be a 3D powerhouse, it should be adequate for many users.

Finally, let’s take a look at boot and resume times. 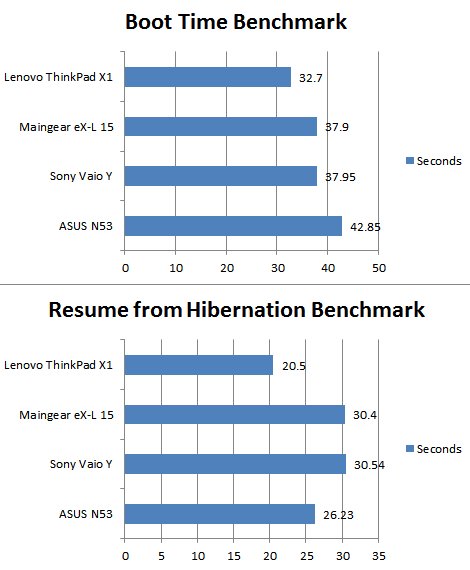 Lenovo has stated in the past that it believes fast boot times to be an important goal, and it’s one they seem to be making progress towards. Although the X1 is not the most powerful laptop we’ve ever tested by a long shot, it’s one of the quickest where boot and resume times are concerned. This is no doubt due to the combination of a fast processor, fast hard drive and minimal bloatware.