HAWK Through the Ages

MSI is offering the latest NVIDIA 560 Ti in HAWK form

Have I mentioned that MSI is putting out some pretty nice video cards as of late?  Last year I was able to take a look at their R5770 HAWK, and this year so far I have taken a look at their HD 6950 OC Twin Frozr II and the superb R6970 Lightning.  All of these cards have impressed me to a great degree.  MSI has really excelled in their pursuit of designing unique cards which often stand out from the crowd, without breaking the budget.  Or even being all that more expensive than their reference design brothers.

MSI now has two ranges of enthusiast cards that are not based on reference designs.  At the high end we have the Lightning products which cater to the high performance/LN2 crowd.  These currently include the R6970 Lightning, the N580 GTX Lightning, and the newly introduced N580 GTX Lightning Extreme (3 GB of frame buffer!).  The second tier of custom designed enthusiast parts is the HAWK series.  These are often much more affordable than the Lightning, but they carry over a lot of the design philosophies of the higher end parts.  These are aimed at the sweet spot, but will carry a slightly higher price tag than the reference products.  This is not necessarily a bad thing, as for the extra money a user will get extra features and performance.

As mentioned before, the HAWK series of cards originated with the AMD HD 5770 chip.  This was a great card at the time, and it allowed people to dive into DX11 functionality at a price well below $200.  It offered performance akin to the earlier HD 4870 series, but with the addition of aggressive overclocking hardware and the above mentioned DX11 functionality.  These cards could routinely go above 1 GHz, and even when overclocked the cards were very quiet.  Twin Frozr technology, voltage measuring points, and robust overclocking abilities made this card a bargain when it was only around $15 to $20 more expensive than the reference HD 5770s out at the time. 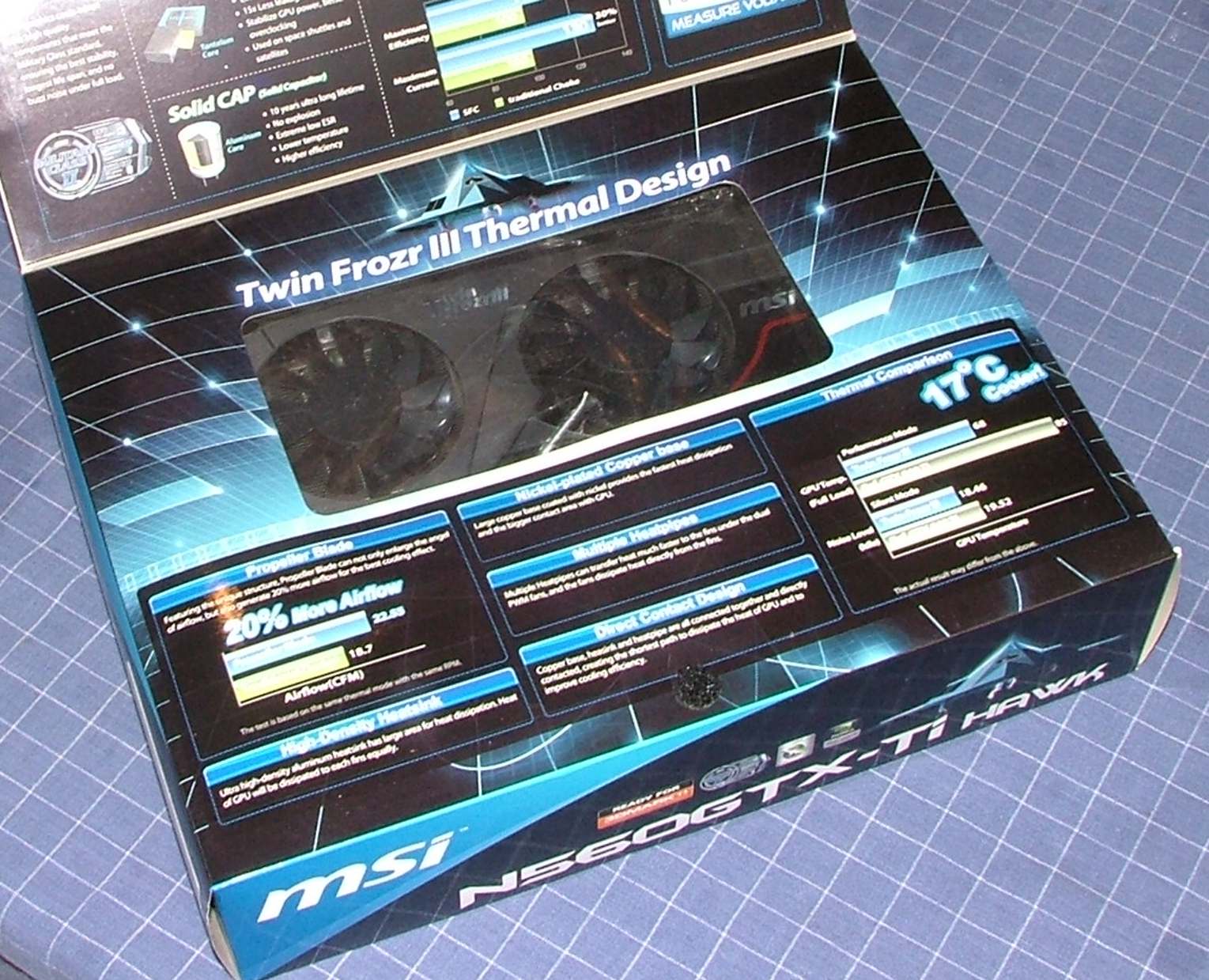 Flipping up the cover of the box reveals all the pertinent information on the N560GTX-Ti HAWK.

Now it is over a year later, and we have seen two more HAWK branded boards come to market.  The GTX 460 based N460GTX HAWK gathered quite a few awards and brought the brand above the $200 price point.  This was again a highly touted product that brought all of the HAWK features to a more performance oriented offering.  Earlier this year we saw the R6870 HAWK which introduced us to the Twin Frozr III series.  Today we will be looking at the third HAWK iteration, based on the highly competitive GTX 560 Ti GPU from NVIDIA.

Last year NVIDIA released the GTX 460 series of parts, and they became an instant success.  While NVIDIA had struggled with the Fermi architecture and the GF100 chip powering the GTX 480 series of cards, they continued to revise the overall architecture to better adapt it to TSMC’s 40 nm process.  The first overwhelmingly successful product based on the revised design rules was the GTX 460.  This chip took the industry by storm, and quickly became the go-to card for new DX11 builds.  The chip gave performance above that of the HD 5770, and even exceeded that of the older and more expensive GTX 285 from the previous generation.

The chip was somewhat crippled though.  NVIDIA was still working out the kinks in the 40 nm process, and a portion of each GTX 460 chip was disabled.  Even though the GTX 460 die had eight Streaming Multiprocessor (SM) blocks, each composed of 48 CUDA cores, one of those was always disabled.  The reasons behind this had mainly to do with TDP as well as recovering a decent amount of potentially flawed cores.  By reducing stream count by one SM block, NVIDIA was able to improve yields and bins.  This allowed the GTX 460 to be the success that it was.  Even a year after its release, the GTX 460 is a top selling product and still being offered by every major manufacturer who supports NVIDIA cards. 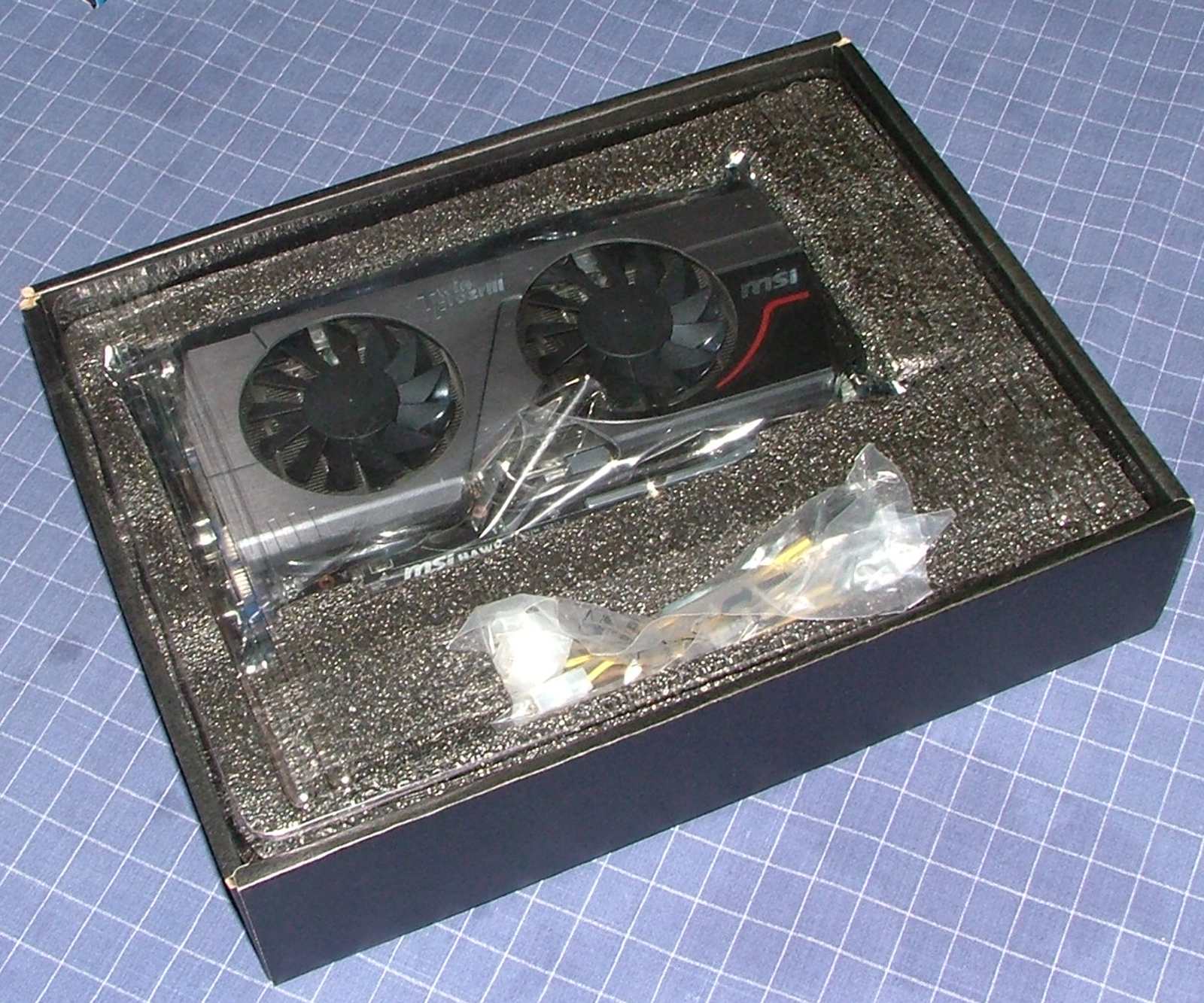 The card is nicely packed and protected by copious amounts of foam.

The release of the GTX 560 changed things up a bit.  This new card is based on a redesigned GTX 460 core, which is internally badged as the GF114.  These new chips did not have a processing block disabled, so overall stream count rose from 336 CUDA cores to 384.  This redesign also improved the thermals and power draw of the chip, so they can be offered at higher speeds without significant detriments to the TDP of the card.  Due to the extra processor block, texture counts rise from 56 to 64.  ROPS and memory controllers remain the same.  The only real downside to this particular architecture was the decision to make the memory controller as simple as possible, yet still support GDDR-5 memory.  Apparently it takes a lot of work and an inflated transistor count to run GDDR-5 memory at 5 GTPS and above.  While AMD has invested the work and budget to run their top end controllers at 5.2 GTPS, NVIDIA thought that their time would be better spent addressing other parts of the GPU.  As such NVIDIA sits around 4.0 to 4.2 GTPS with their controller, even when paired with the highest rated GDDR-5 memory.  This is an improvement from the GTX 460’s 3.6 GTPS specification.

The redesigned chip now performs as well as the older GTX 470, and is being offered at a price point that is significantly higher than what the average GTX 460 has fallen to.  Boards are going anywhere from $230 to $290, depending on instant and mail in rebates.  At the low end it competes with the AMD HD 6870 products, but at the high end it goes against the pretty formidable HD 6950 1GB and 2GB cards.  The base specification has clock speeds at a brisk 822 MHz, but very few manufacturers toe that particular line anymore.  The GF114 has a much higher clock limit without breaking the TDP bank.  As we will see, overclocked editions of those cards really push the spec to the limit.