The HAWK series are not designed to be “over-the-top” as the higher end Lightning cards are, but they are designed to definitely one-up the reference boards.  MSI redesigns the PCB to improve signaling, power distribution, and component placement.  The next steps are to address power delivery and thermal control.

The Twin Frozr III cooling system is used, which features a whole load of aluminum fins attached to a nickel plated, copper base.  There are four heatpipes radiating from the base, two of which are the infamous “Superpipes” that are 8 mm wide.  Twin 80 mm “propeller blade” fans are specially designed to increase overall airflow while maintaining the same acoustic signature of the previous generation of fans used on Frozr cards.  Part of the airflow is exhausted out of the back of the card, but the majority of it escapes into the case.  This so far has not been a huge issue for MSI, as these cards are typically so efficient at cooling the card that they actually seem to lower CPU and case temperatures.  The final piece is the “form-in-one” heatsink which covers the memory and VRM components to help keep them cool.  The downward draft of the fans also helps to cool both heatsinks, as well as the other exposed components throughout the board. 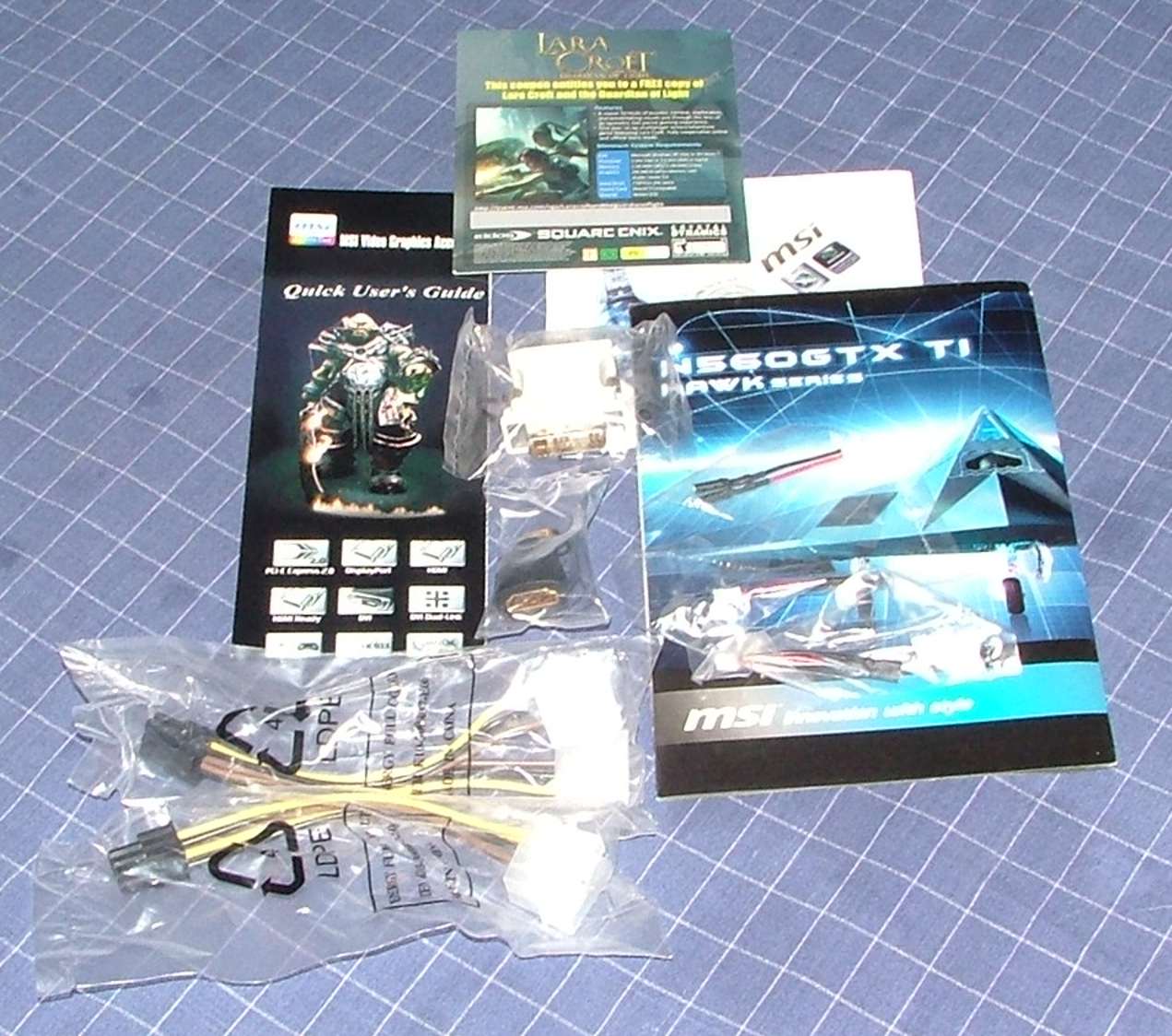 The bundle is right about what you would expect for a product at this price range.

The board features twin DVI-I outputs, as well as a mini-HDMI.  Triple screens are supported, but two cards must be used to get this functionality to work.  The GTX 560 does not support triple SLI, as it only has the one connector at the top of the board.  There is a BIOS switch which toggles silent operation, while the other further unlocks the card and spins up the fans.  Another switch on the back unlocks the upper limit of voltages of the card, so that LN2 folks can lay hands on it for some records (if so desired).  This is certainly not something to mess with unless the user knows exactly what they are doing.

The anti-warping bar across the top, as well as the form-in-one heatsink, keep the board from deforming when mounted in a case.  This is something I can appreciate.  I have had a few cards through the years that have warped badly enough to actually break the solder on some components, and the board stopped working.  The board is powered by 2 x PCI-E six pin plugs, which should combine with the PCI-E connector to give a total of 225 watts of peak power.  The board itself is rated for around 180 watts, so there is some leeway here.

There are three voltage monitoring points on the board, and the bundle includes three voltage probe plugs to fit in said monitoring points.  The board also maintains the Military Class style of component choice.  Solid caps populate the board, as well as the higher quality chokes, and the copper-base FETs.  The board itself features an 8+1 PWM array for supplying the GPU and memory with power.  The base reference 560 Ti has a 4+1 setup.  A few of the other higher end boards from Asus and Gigabyte feature 6+1 phases.  In theory this should make for a cooler running card with greater overall stability when the GPU is pulling more current.  The board also has the ability to turn on and off the different power phases, so when the GPU is in a low power state, not all phases are being utilized.  During light load, the board activates as many phases as it thinks it needs.  The card is also fairly unique in that it allows the user to adjust the voltage on the GPU, memory, and PCI-E connection.  MSI Afterburner is needed to complete this, as well as some ini file changes to uncover that functionality. 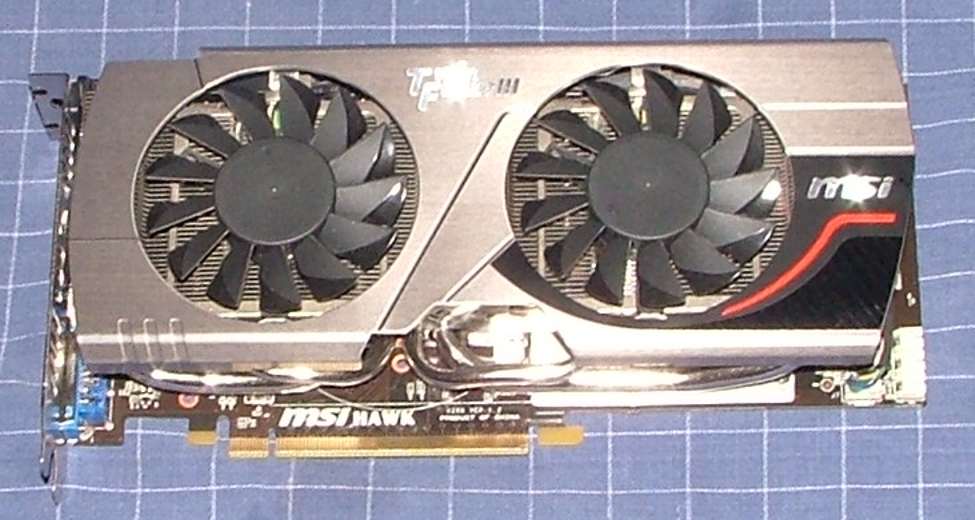 The board does feature a classy look and thankfully the cooler works as advertised.

The video card is overclocked out of the box by a hefty amount.  The stock speed is 822 MHz, but the 560-Ti HAWK comes screaming out of the box at 950 MHz.  The memory did not a get a bump from the reference speeds though.  It is sitting at 4.2 GTPS, but of course the user can overclock the memory once they get grubby mitts on it.  The framebuffer is still at 1GB.

Bundles are not what we used to see, but MSI still packs in some good extras.  Currently the HAWK comes with a free game, and in my case it is “Lara Croft and the Guardian of Light”.  Not exactly flying off the shelves, but it is better than a swift kick to the posterior.  The box itself is nice and sturdy.  The inner box is double walled, and the video card is protected by a good amount of foam and a plastic cover on the top. 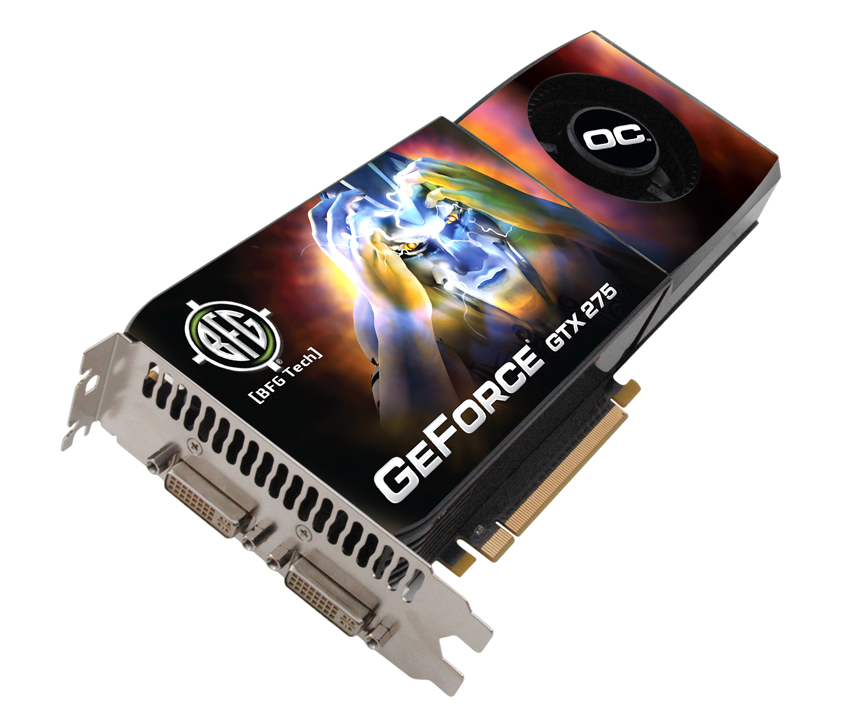