BlackBerry is proof of the tech industry’s merciless pace of innovation. Five years ago, Research in Motion (the company responsible for BlackBerry) seemed to be on the top of the mobile world. Its phones offered unique functionality that, although sometimes replicated by competitors, was generally considered world-class. If you were interested in doing more with your phone than making calls, a BlackBerry handset was a solid choice.

Today, however, the brand is considered to be on its last legs. This perception is an exaggeration – BlackBerry devices are still popular the world over – but the company’s position has certainly been compromised by iOS and Android phones. Attempts to counter these competitors with devices like the touchscreen BlackBerry Storm haven’t gained much traction.

BlackBerry is quite late to that party, however – it took years to finally develop an iPhone/Android fighter, and even now the company seems somehow skeptical that touchscreen phones are all-that, so it’s little surprise that it’s behind the competition. Tablets, however, are a different story. Today we’re going to be looking at the BlackBerry PlayBook, which has actually joined the tablet crowd quite early. In my opinion, it’s the fourth credible tablet to hit the market, the other three being the iPad/2, the Xoom and the Galaxy Tab. Does it present something new to this small group, or does it falter like BlackBerry’s touchscreen phones?

Continue reading to get our full review of the new Blackberry Playbook tablet! 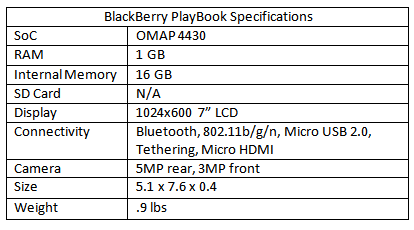 Unlike the Xoom and the Galaxy Tab – as well as every other Honeycomb based tablet promised to arrive by the end of the year – the Playbook doesn’t rely on Nvidia’s Tegra 2. Instead, it uses a 1 GHz dual-core A9 processor, which carries with it PowerVR SGX540 graphics. On paper, these are impressive specifications, as they roughly match those of the iPad 2, which is currently the quickest tablet on the market.

The PlayBook also distinguishes itself from most Android competitors, and also Apple’s champion, with its size. This BlackBerry gets by with a 7” display, which results in a correspondingly small chassis. But does this feel right in-hand? 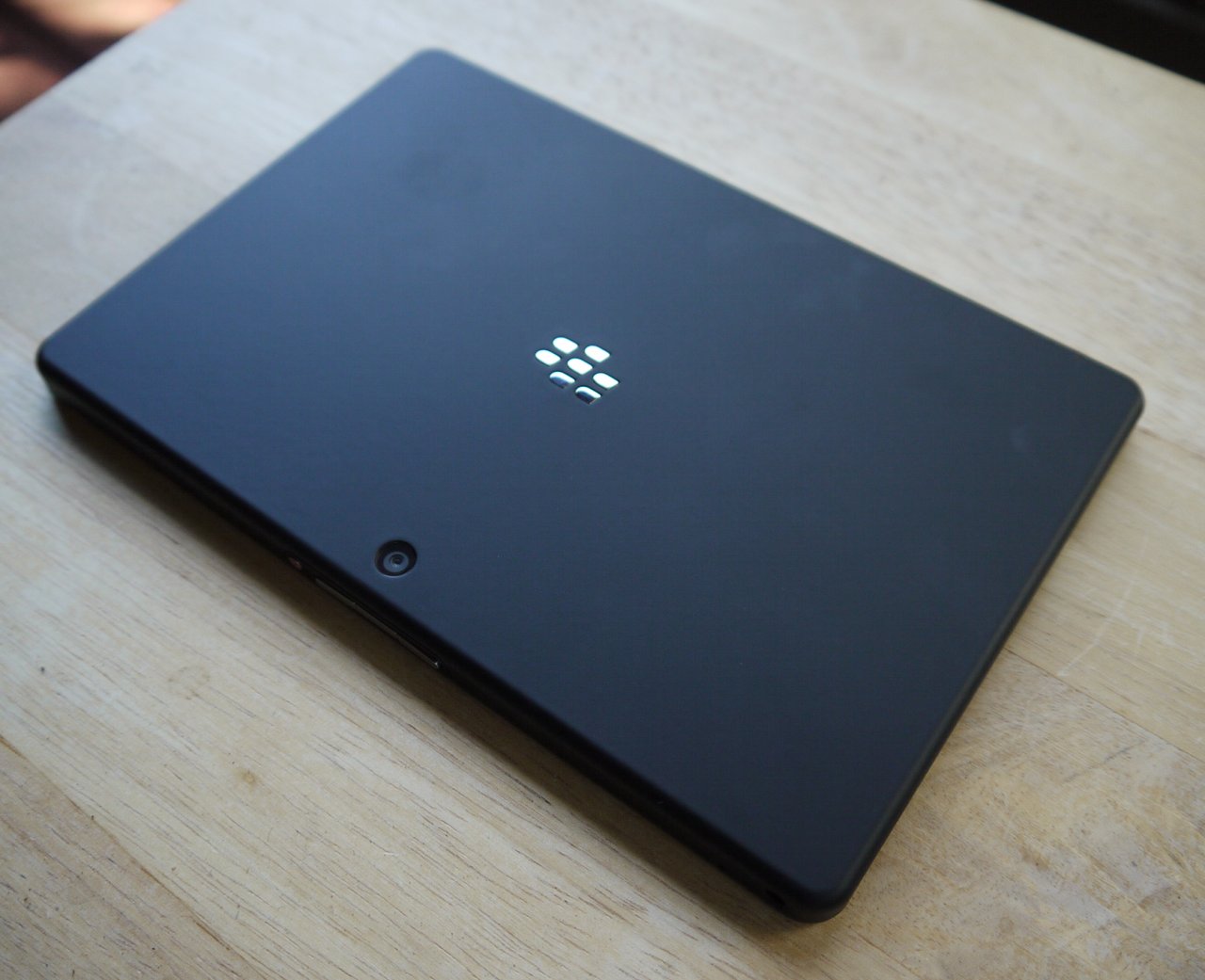 Sleek, rounded corners and attractive rear covers are par for the course in this segment, yet this entry makes no such accommodations for aesthetics. The rear is made entirely of matte black plastic, and the edges of the device are only slightly rounded. Placed on a table with its display down, this tablet looks like nothing more than a BlackBerry branded slab of plastic. That’s not entirely an insult, however, as the matte surfaces are easy to keep clean and the texture of the plastic provides a firm grip on the device.

This grip is enhanced by the size of this tablet. At about seven and a half inches wide and five inches tall, this is not a large tablet by any measure, and it’s easy to handle as a result. The tablet can be palmed by stretching a hand across its narrowest dimension and picking it up, something I can’t easily accomplish with an iPad or Xoom. Holding the tablet with a single hand is comfortable, and not just because of the light weight. The small size increases the control your hand has over the device, and makes it less likely that you’ll find yourself struggling to keep the tablet upright because of a moment of poor hand balance. 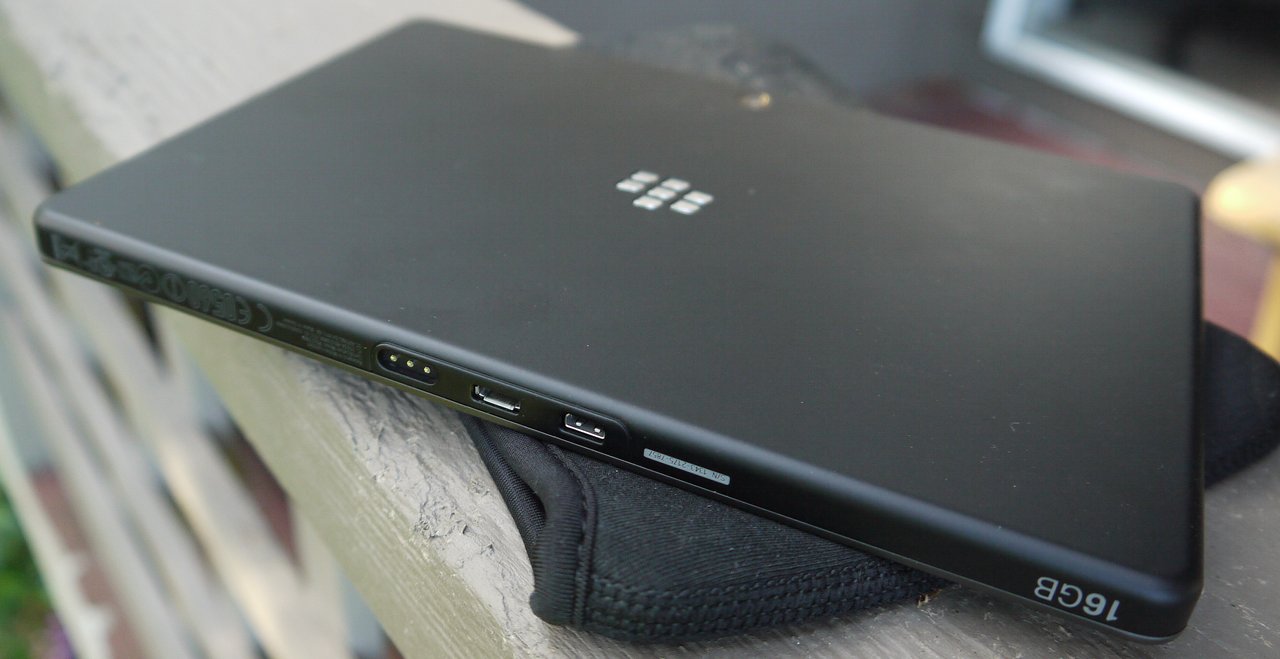 Speaking of control, there’s plenty of it in the form of buttons and ports. Along the top of the tablet you’ll find a power button along with volume buttons and a play/pause button, which can be used as a hardware control for audio or video content playing on the device. There’s a headphone jack along the top of the device, while on the bottom there is a row of ports including microHDMI, microUSB and a set of charging contacts.

From an ergonomic perspective, there’s little to complain about. The light weight and small size makes this device easy to handle. The buttons have good feel and the ports are well placed, although I’d prefer if the headphone jack was on the top right side of the tablet instead of its current location.