In a feat of overclocking prowess, the crew over at Akiba have managed to push the AMD Llano A8-3850 to its limits to achieve a Super PI 32M score of 14 minutes and 17.5 seconds at an impressive 4.75GHz. Using a retail A8-3850 APU, a Gigabyte GA-A75-UD4H motherboard, and a spine chilling amount of Liquid Nitrogen, the Japanese overclocking team came very close to breaking the 5GHz barrier.

Just how close did they come? 4.906.1GHz with a base clock of 169.2MHz to be exact, which is mighty impressive. Unfortunately, the APU had to undergo some sever electroshock therapy at 1.792 Volts! Further, the 4.9GHz clock speed was not stable enough for a valid Super PI 32M result; therefore, the necessity to run the benchmark at 4.75GHz.

The extreme cooling ended up causing issues with the motherboard once the team tried to switch out the A8-3850 for the A6-3650; therefore, they swapped in an Asus F1A75-V PRO motherboard. With the A6-3650, they achieved an overclock of 4.186GHz with a base clock of 161MHz and a voltage of 1.428V. The overclockers stated that they regretted having to swap out the Asus board as they believed the Gigabyte board would have allowed them to overclock the A6-3650 APU higher due to that particular motherboard’s ability to adjust voltage higher. 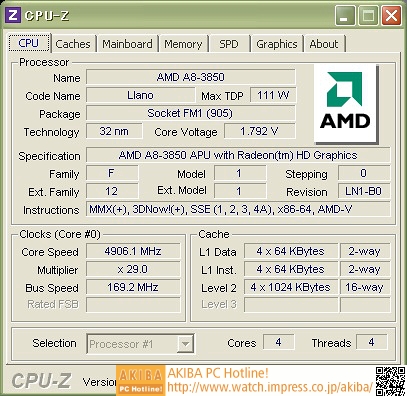 Although they did not break the 5GHz barrier, they were still able to achieve an impressive 69% overclock on the A8-3850 and a 61% overclock on the A6-3650 APU. For comparison, here are PC Perspective’s not-APU-frying overclocking results. At a default clock speed of 2.9 and 2.6 respectively, the A8-3850 and A6-3650 seem to have a good deal of headroom when it comes to bumping up the CPU performance. If you have a good aftermarket cooler, Llano starts to make a bit more sense as 3.2GHz on air and 3.6GHz on water are within reach.  How do you feel about Llano?