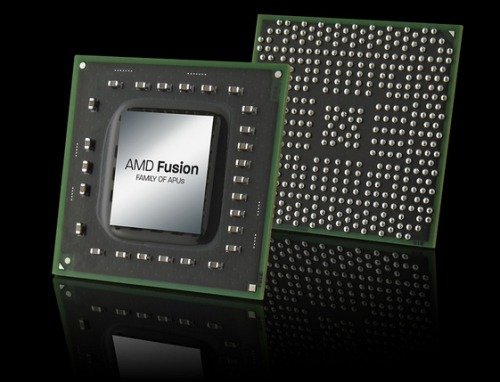 According to MaximumPC, the new E-450 APU takes the top slot, bringing two CPU cores clocked at 1.65GHz, a Radeon HD 6320 GPU clocked at a base of 508MHz and maximum of 600MHz, and a power sipping TDP of 18 watts. The second new E-Series APU carries the same 18 watt TDP and dual CPU cores as the E-450; however, it is clocked at a lower 1.3GHz. Further, the chip’s Radeon HD 6310 GPU is clocked at 488MHz.  The new E-Series APUs feature battery life increases to the tune of up to 10.5 hours of Windows idle time.

The new C-Series APU is the C-60, and is a 1GHz dual core chip with a Radeon HD 6290 GPU. The APU is able to turbo its CPU cores to a maximum of 1.33GHz, while the GPU has a base clock of 276MHz and a maximum clock speed of 400MHz. Further, the chip has a 9 watt TDP, and boasts 12.25 hours of “resting battery life,” which AMD benchmarked using Windows Idle on a C-60 based netbook.

Currently, AMD has shipped more than 12 million APUs, and more than five million of the C-Series and E-Series processors in Q2 2011. More information on the specific benchmarking metrics AMD used can be found here.