ASUS comes at us with a Republic of Gamers Matrix-branded GTX 580 that offers a big jump in hardware for a modest increase over reference prices.

I have got to be honest with you – most of the time getting me excited for graphics cards any more is a chore.  Unless we are talking about a new architecture from NVIDIA or AMD, card vendors are hard pressed to the same attention from me they used to a couple of years ago when every card release was something to pay attention to.  Over the next week or so though it turns out that ASUS and Gigabyte have a few noteworthy items definitely worth some grade-A analysis and reviewing starting with today’s: the ASUS ROG Matrix GTX 580 beast. 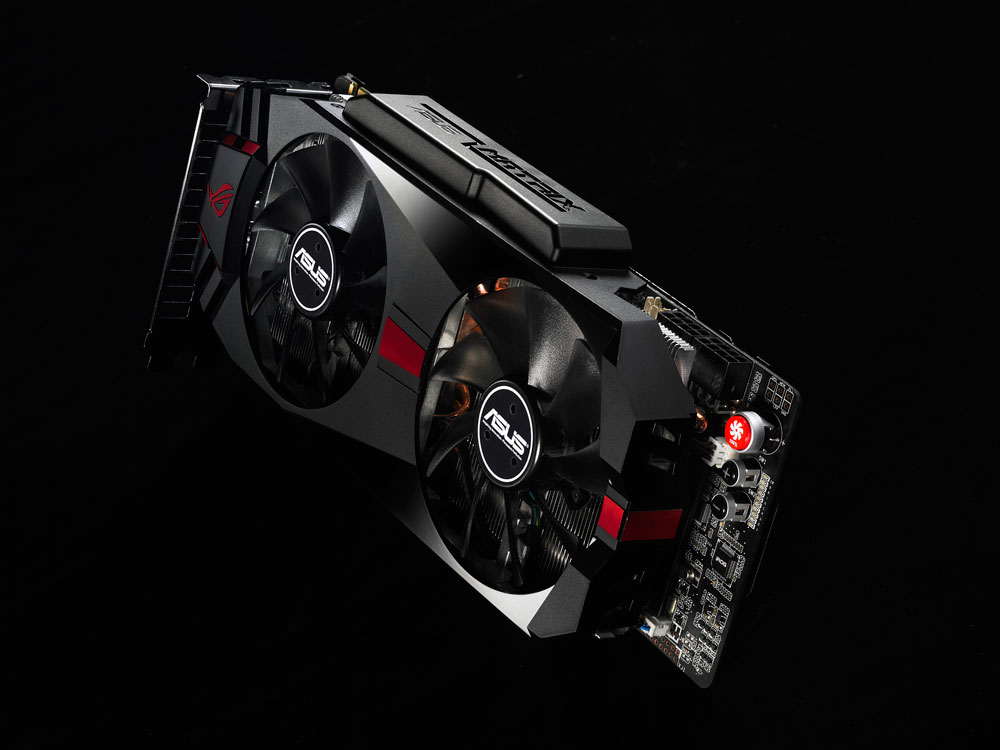 The Republic of Gamers brand is reserved for the highest-end parts from the company that are obviously targeted at three main segments.  First, the serious gamers and enthusiasts that demand the top level performance either because they can’t stand to lose at gaming or just want nothing but the best for their own experiences.  Secondly are the professional overclockers that live on features and capabilities that most of us could only dream of pushing and that need LN2 to get the job done.  Finally, the case modding groups that demand not only great performance, but sexy designs that add to the aesthetics of the design as whole and aren’t boring.  The ROG brand does a very commendable job of hitting all three of these groups in general and specifically with the new Matrix-series GTX 580.

In the following pages we will document what makes this card different, how it performs, how it overclocks and why it might be the best GTX 580 card on the market today.

The Matrix GTX 580 is able to address the three above listed markets with a combination of hardware technology, new software and unique tweaking features that aren’t found in many other products. 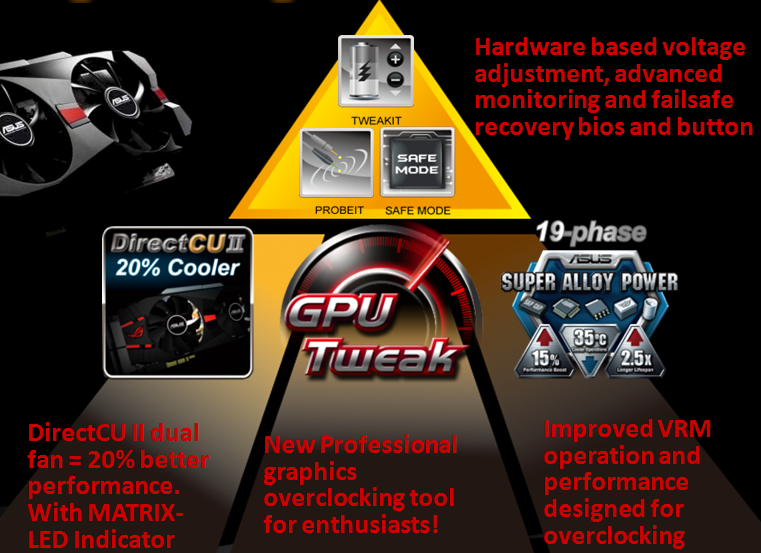 The four pillars of the Matrix GTX 580 start at the top with things like the hardware based voltage adjustment, monitoring and the safety of the "Safe Mode" button but continues with a much better (and larger) cooler than the reference design, new overclocking and management software and finally is all built on a 19-phase power design for improved overall performance. 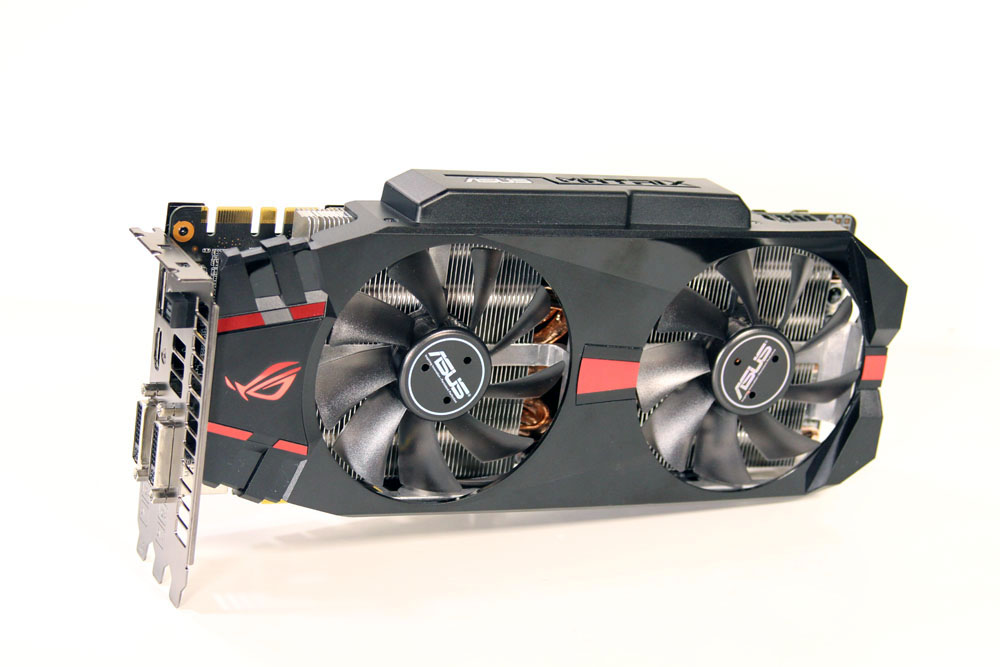 At a first glance the Matrix 580 definitely stands out with dual fans and a shard black and red color configuration.  And while the above photo doesn’t really put things into perspective, it also stands out because it is BIG. 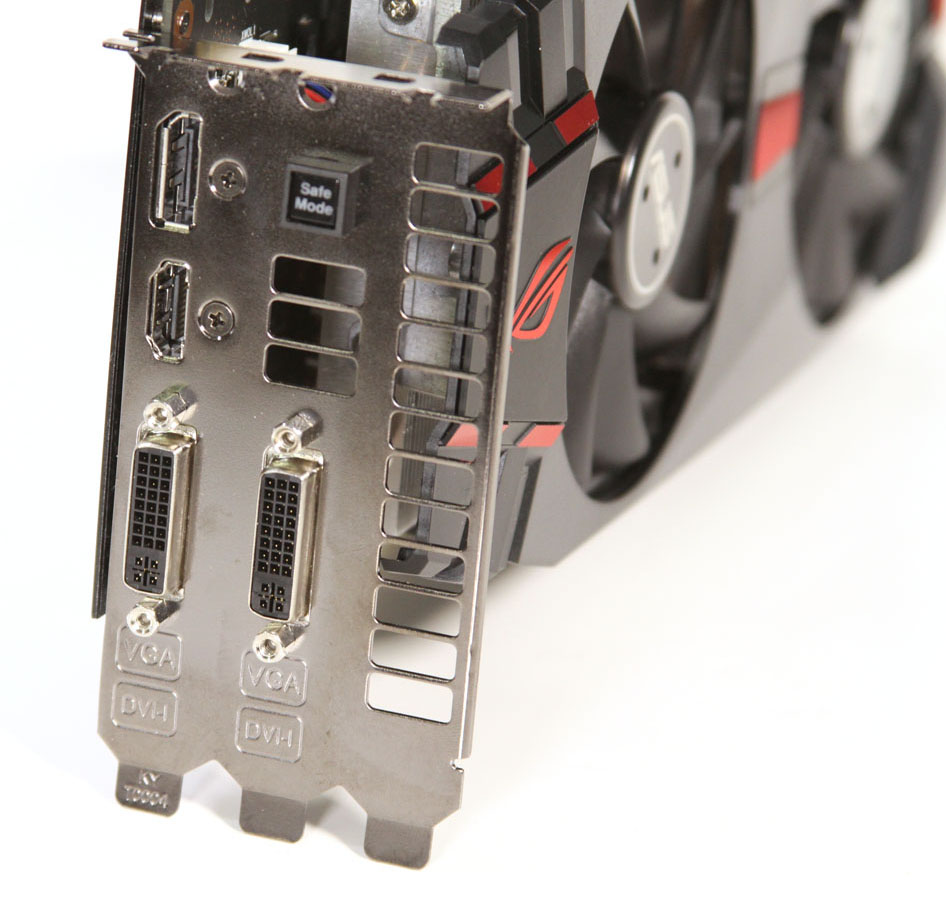 This card takes up three slots on your case and thus will take up three slots on your motherboard as well.  This could be an issue for a user that was planning on using not only the port directly below the Matrix GTX 580 but even the one AFTER THAT!   If you are planning a new system build you should keep this mind during product selection and make sure you have the appropriate motherboard to get the job done as you need it.

ASUS includes a pair of dual-link DVI outputs, a full size HDMI output and even a full size DisplayPort connection for display connections.  Keep in mind you can still only use TWO of them at one time.  The "Safe Mode" button is a great feature for users that want to overclock their graphics card with the included GPUTweak software – if you overclocking the card too high and are having issues booting back into an OS you can hit this button to revert back to the original out-of-box speeds.  This can really be a life saver for enthusiast users!

Along the top of the card (and properly facing the window on your case if you have one) is an ASUS Matrix logo that lights up according to the load of your system.  This is a hardware feature and not related to software at all so you don’t have to have ASUS’ software installed if you don’t want to. 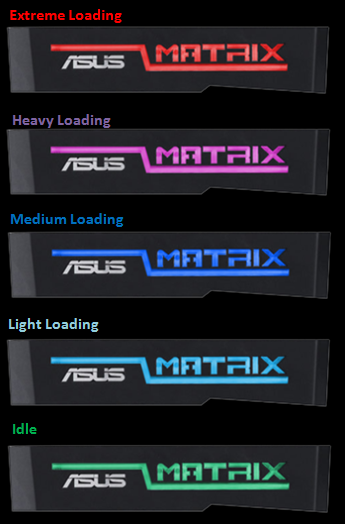 At idle the color of the logo is green, goes up to blue as the gaming load increases and hits full on bright red when it is really being pushed.  Only in a few of our gaming tests did we actually see the red color really come out – Metro 2033 for example.  This is good for an at-a-glance look at if your GPU is being utilized completely and just helps give the Matrix GTX 580 an edge in aesthetics. 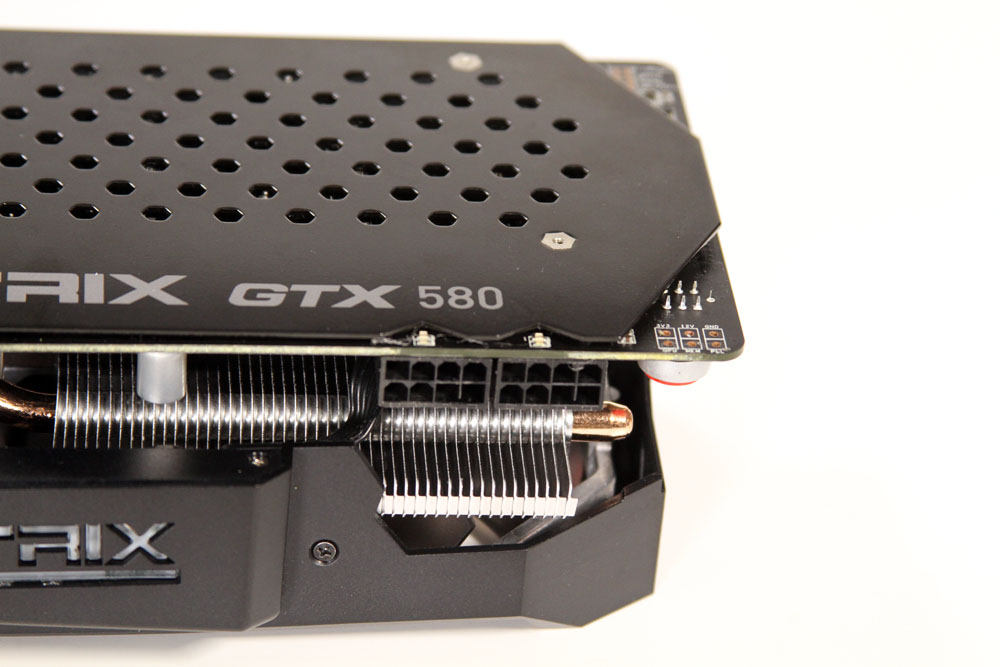 With the added power capability of the card it does require a bit more juice than the reference GTX 580 and requires dual 8-pin power connectors.  There are two LEDs directly over the plugs as well that will light green when they are being fed with enough power, red if you accidently connected a 6-pin or forgot all together. 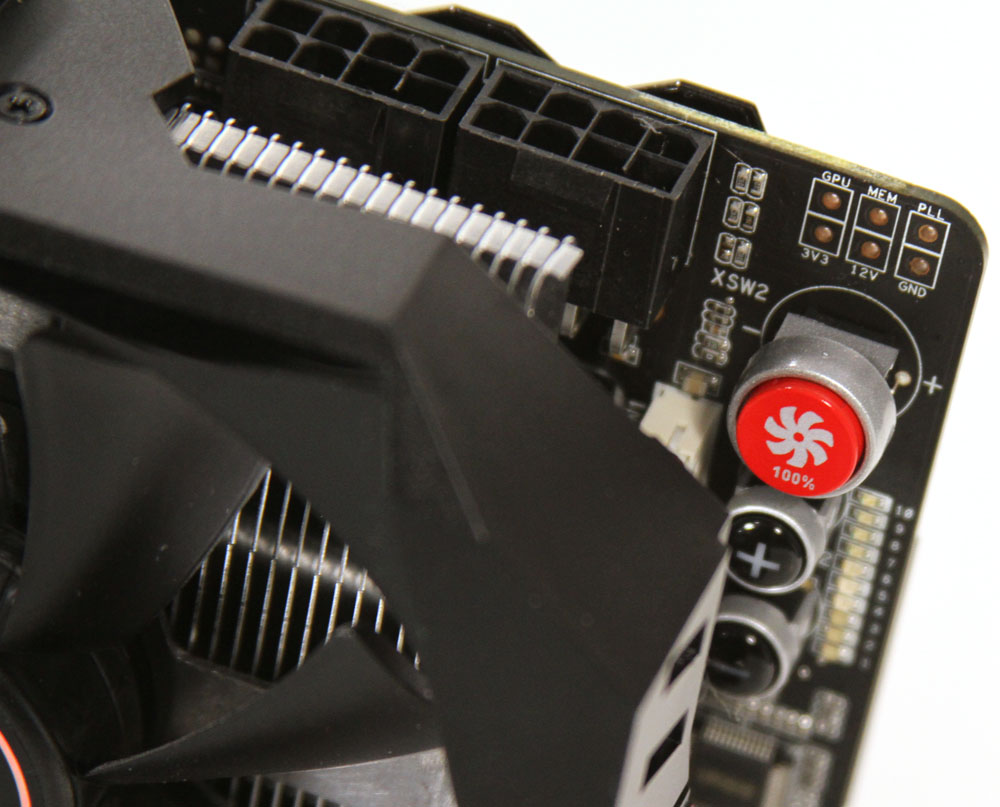 One of the more unique features is the TweakIt section here at the back of the Matrix GTX 580 that can adjust hardware voltage in real-time.  The + and – buttons actually move the voltage on the GPU up or down by 0.125v increments – and LED strip to the right will go from green to yellow to red to indicate your "danger" level there in case you aren’t comfortable with just flying by the seat of your pants.

The red button here pushes the fan all the way up to 100% instantly for added cooling and it does get LOUD at that speed.  Obviously, all three of these buttons are only useful for users with an open test bed so we are likely talking about the professional overclockers only.

Above the 100% fan button is the ProbeIt portion of the PCB that will allow users to monitor hardware voltages in real time with a multimeter rather than depending on software.  There are connections for the GPU, memory and PCIe bus voltages. 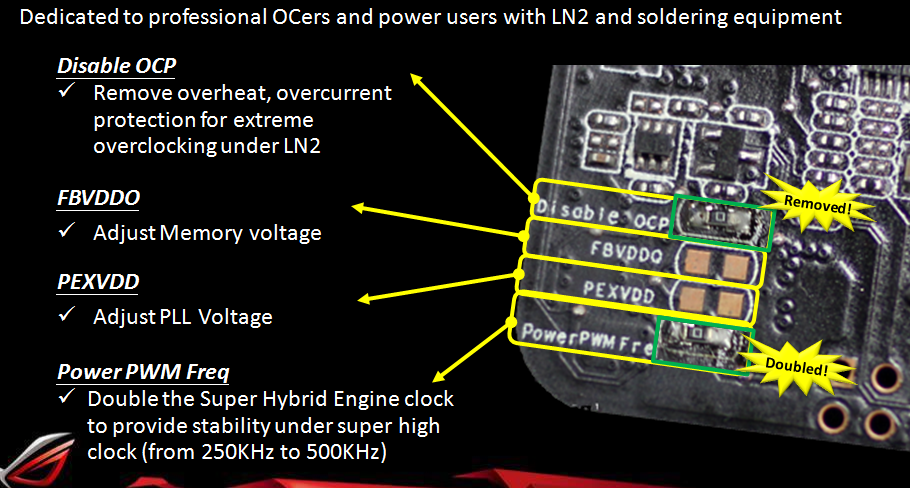 Another interesting spot for the extremely hardcore overclocker is found on the back of the card – the ModZone as ASUS calls it.  This offers quite a few options including disabling the OCP (over current protection) completely, adjusting the memory and PLL voltages and even doubling the clock rate of the Super Hybrid engine for increased power use by more stability.  These settings are small and kept that way on purpose as they tend to be very hardcore focused. 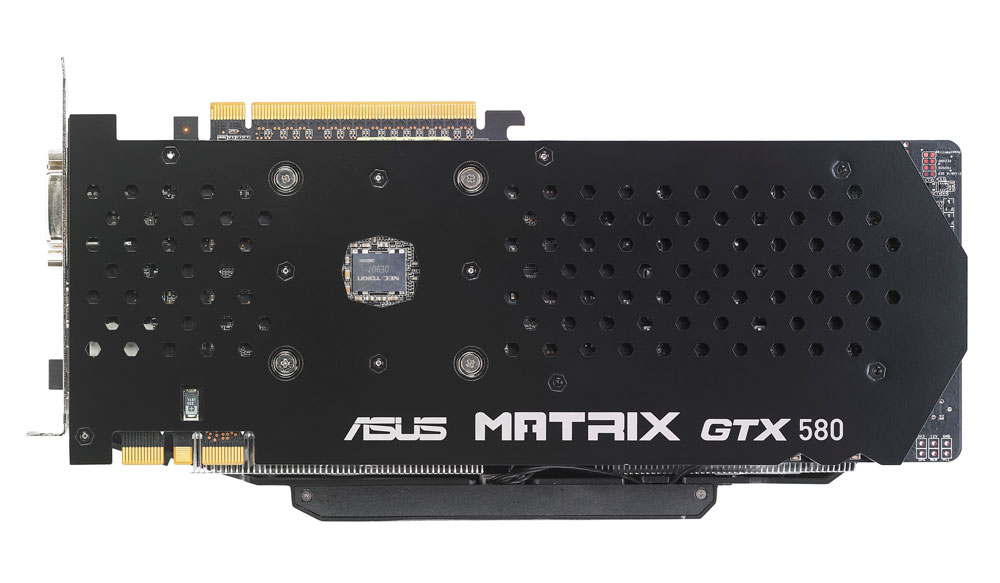 The back of the card is covered by a shield that protects the PCB and acts as a simple heatsink as well.  If your card is installed in an upside down configuration you get the label of the card facing you – never one to miss a branding opportunity!  Notice that small chip-looking thing in the middle though…? 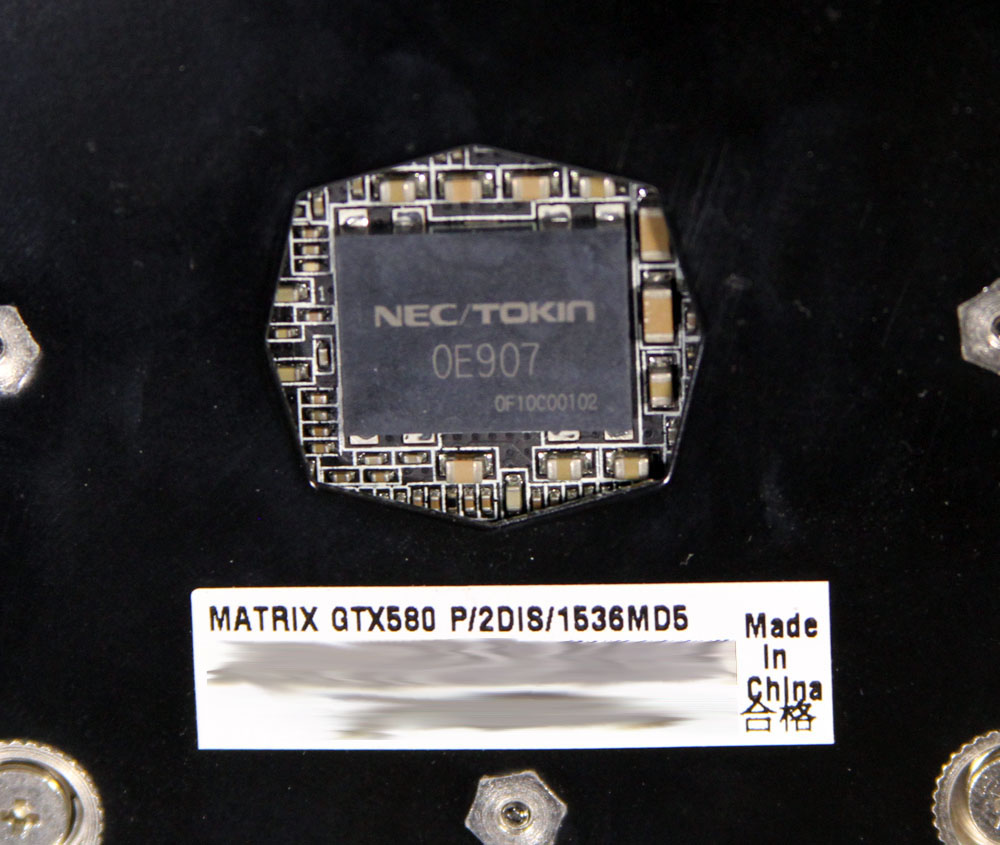 Located directly behind the NVIDIA GeForce GTX 580 GPU, this is actually a SAP CAP: Super Alloy Power Capacitor that ASUS claims offers superior overclocking potential due to its higher capacitance and lower noise ratios compared to other high end models.  The location of the CAP directly behind the GPU also means less interference from other noisy signals. 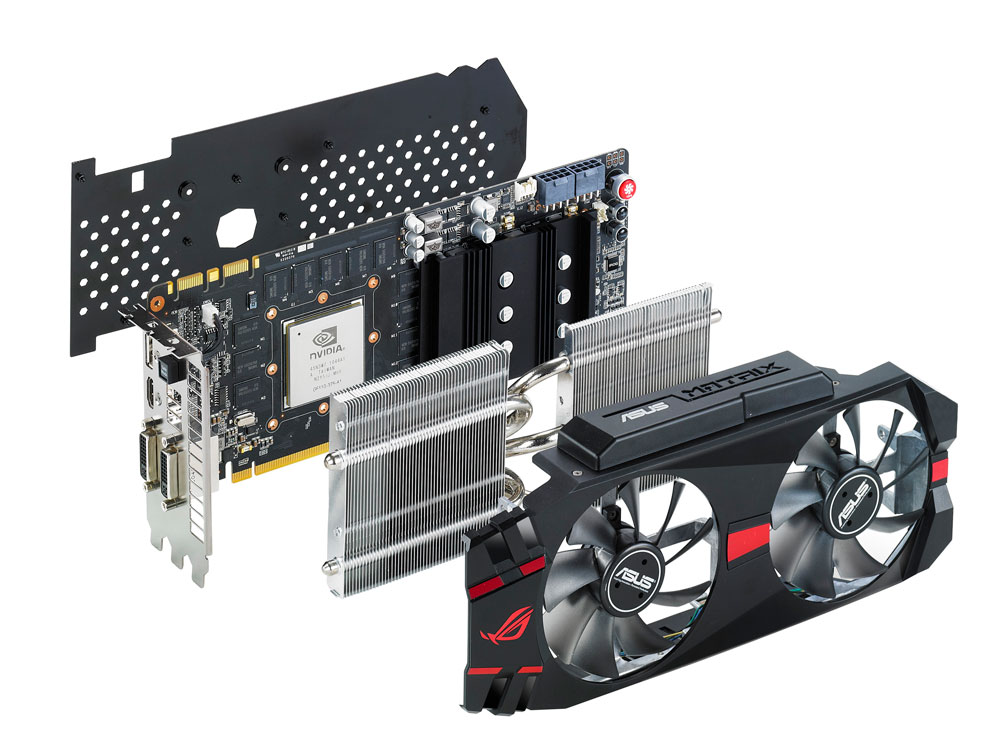 This exploded view of the Matrix GTX 580 shows off the cooling capability of this single-GPU graphics card.  The DirectCU II cooler offers 20% cooler temperatures than the reference design with five copper heatpipes to move heat to the large fins and finally to be cooled by the dual fans.  ASUS claims that they can move 600% more air than the reference designed cooler and as our temperatures indicate, this is true. 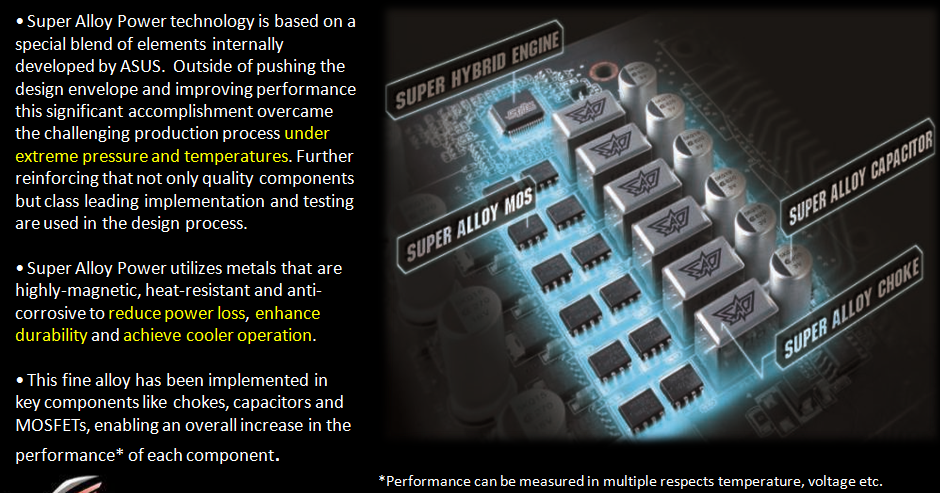 Part of the Super Alloy Power design, ASUS is using materials that are heat resistant and anti-corrosive which in turn reduces power loss, increases durability and just in general makes the card run cooler.  They are putting information like this out there to directly compete with what MSI has done with the "Military Class Components" campaign and we are glad to see both companies willing to step up and provide improved stability and lifetime. 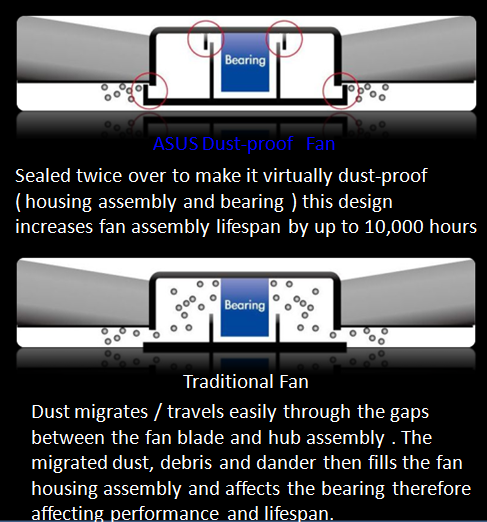 Finally, as part of the DirectCU II cooler, the ASUS "Dust-proof" fan attempts to keep particles out of the fan blade assembly with a set of narrow and double-blocked openings.  This should keep the bearing much cleaner in the long run and hopefully extend the life of this card well into the future.

Now that we have seen what the hardware of the ASUS ROG Matrix GTX 580 looks like, what does the GPUTweak software have to offer?