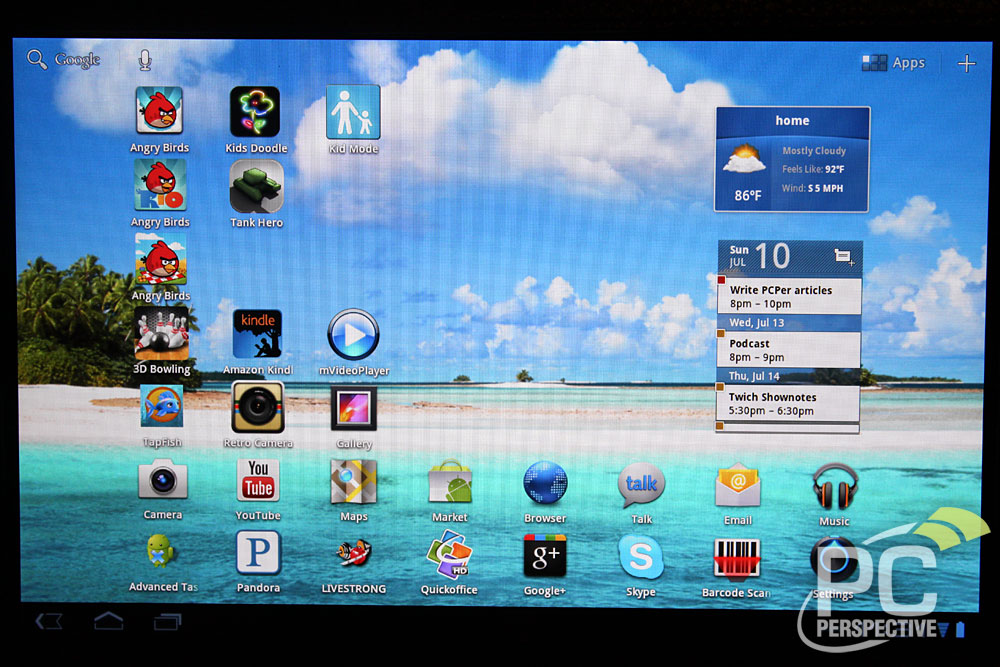 The Samsung Tab 10.1 comes preloaded with Android’s 3.0 "Honeycomb" operating system. Honeycomb is the new platform Android uses for mobile devices with larger displays and features an elegant, content-focused UI design. Samsung is pretty much using it out of the box on the Tab 10.1 until they can push a software update with their own TouchWiz UI in August. 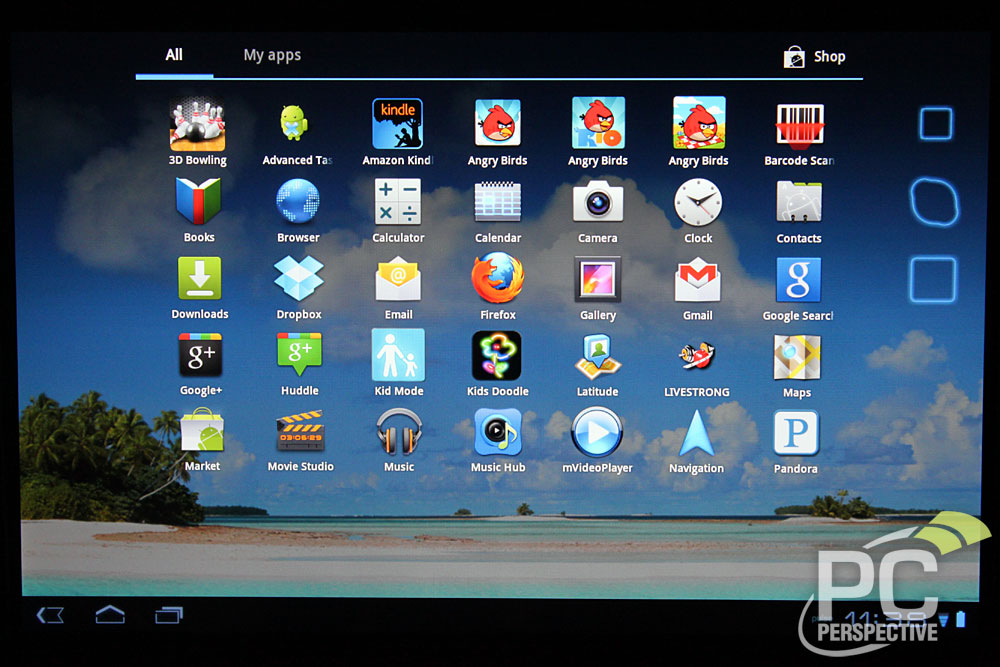 When you click on the apps icon on the top-right portion of the screen you are able to see all the apps installed on the Tab 10.1. We installed quite a few more than what come preloaded, but all the icons are organized alphabetically and are easy to navigate through and use. This UI design for the apps page is similar to how Apple uses icons for their apps, but Android allows developers to make app icons that are more interactive and are not confined to the button model that most people will see with apps installed on the iPhone, iPad2, or iPod Touch. 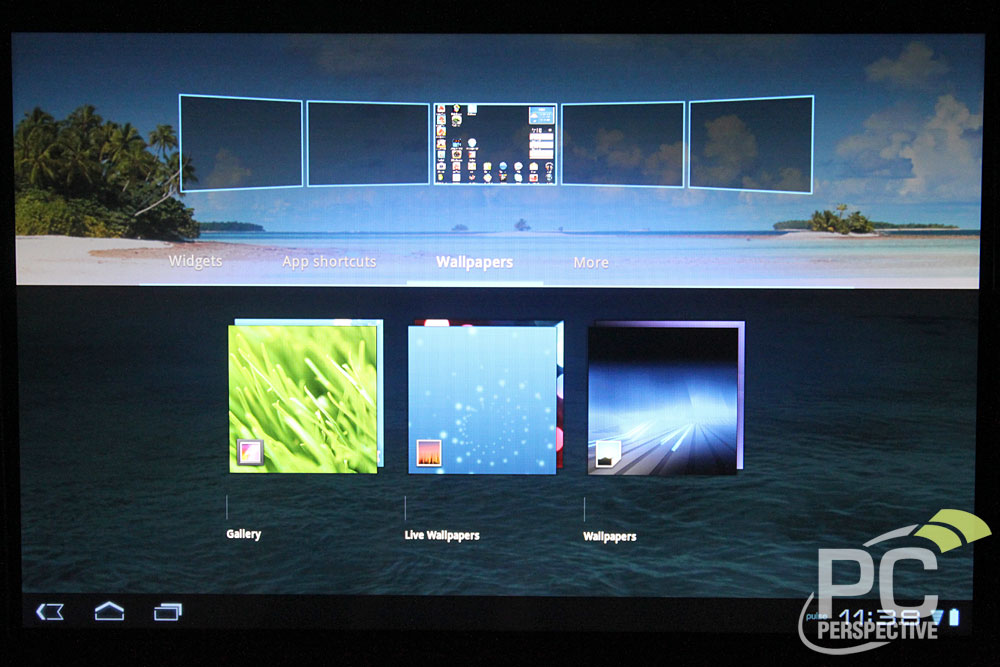 From the home screen, users can touch and hold to bring up a larger menu for seeing all the available real estate on the Tab 10.1. There are five separate screens that users can add more app and widget shortcuts depending upon their individual needs. Users can also change the background wallpaper and use a static image or "live wallpaper" that includes motion.

Under the settings icon, users can configure a variety of options on the Tab 10.1 including wireless, sound, display, GPS location, security, application management, Gmail account, privacy, storage, and a host of other advanced options. The layout of the settings menu is pretty standard and does a good job of explaining each option for novice users. 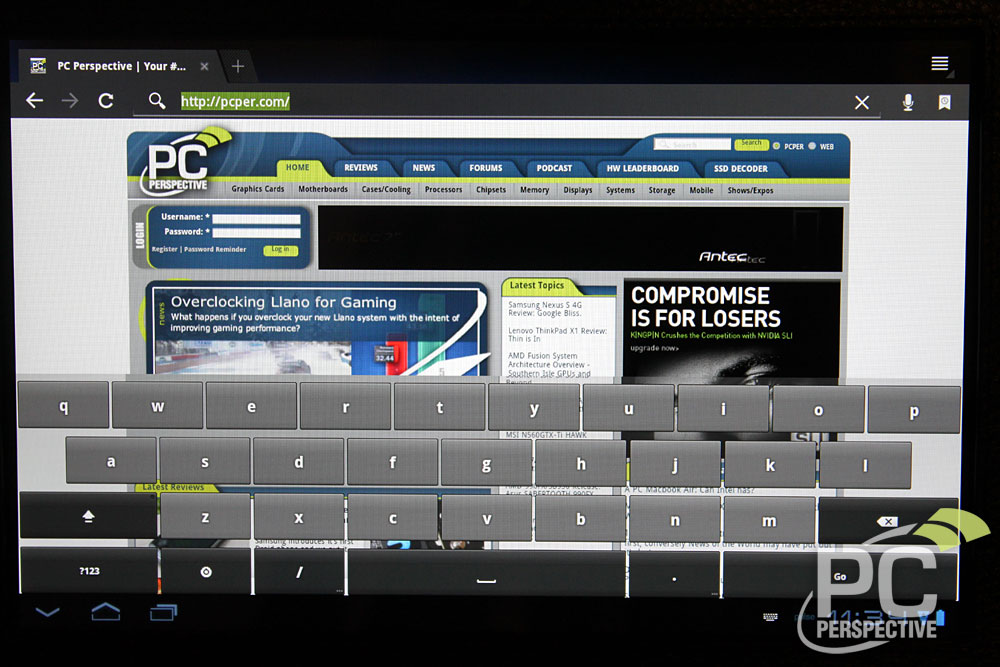 The preloaded browser that comes standard with Honeycomb is pretty intuitive and looks great on the Tab 10.1’s 1280×800 display. I browsed PCPer’s website and was able to navigate through the site quite easily. I was even able to zoom, pan, and rotate the screen to portrait mode very well with little effort. The keyboard configuration can be adjusted based off user preference, but I found the standard keyboard to be quite responsive. I wasn’t able to type as fast as I do on a normal keyboard, but the experience wasn’t off-putting for short messages on Facebook and the PCPer forums. 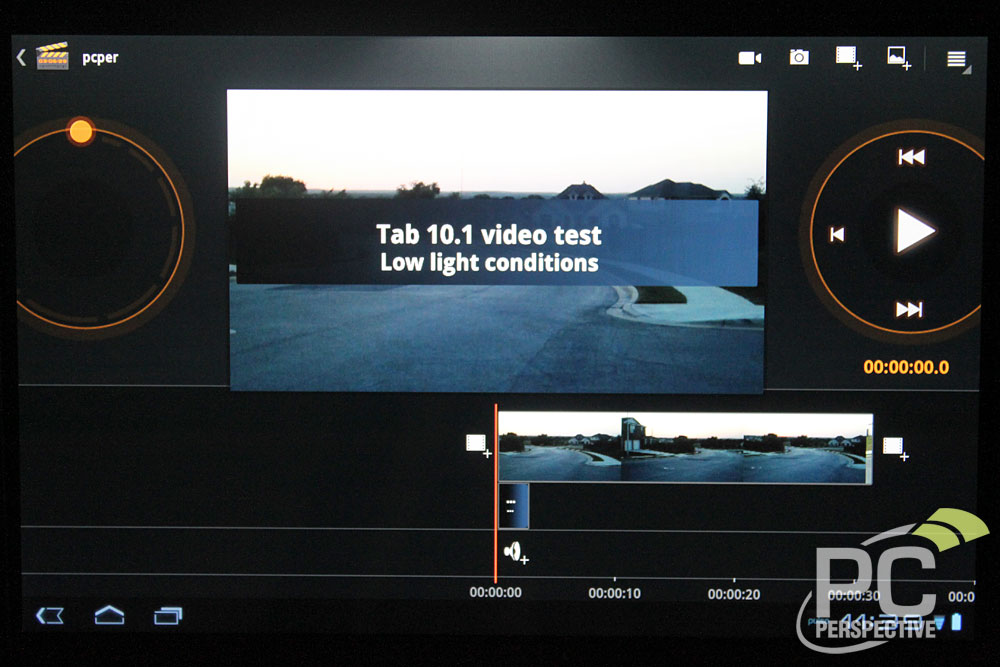 One of the more interesting apps I wanted to play with was the Movie Studio app. I took a couple short video clips outdoors with the Tab 10.1 and began to edit it using this preloaded app. I added a basic title, captions, credits, and even included a few transitions and music. Overall, the application is easy to navigate, but the left scroll wheel is a bit confusing because all it does it left you expand or contract the timeline at the bottom of the screen. I wanted to use it to fast forward the movie clip to different parts I wanted to edit. If they could make that slight change it would be a great movie editor when you need to post a movie to YouTube or Facebook quickly. 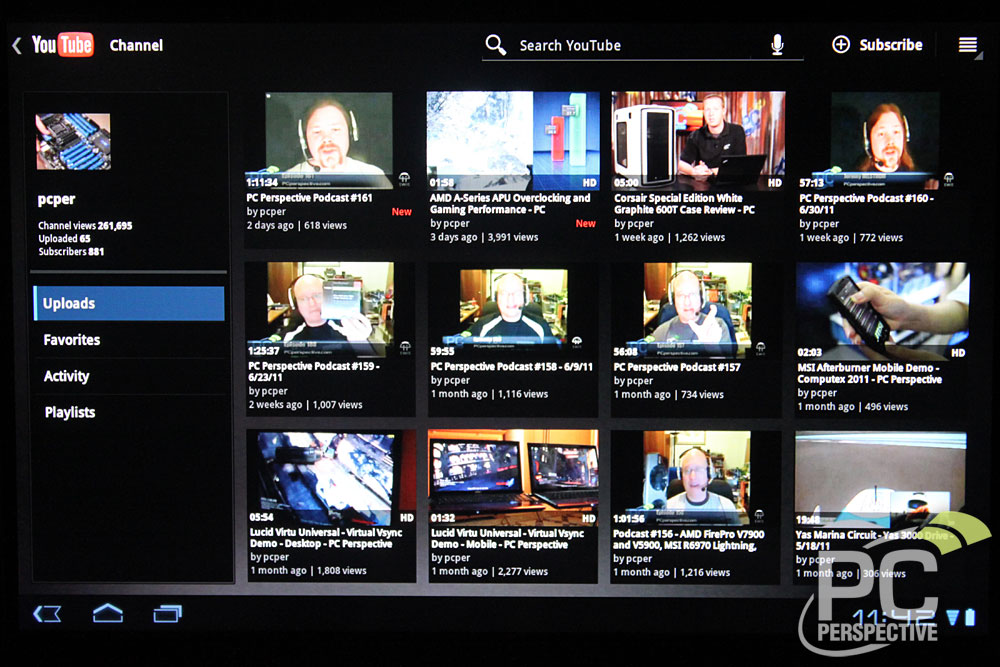 There are a variety of preloaded apps that come with the Tab 10.1, but one of my favorites was the YouTube app. I was able to go to PC Perspective’s channel and scroll through all our weekly podcasts and other videos our team has uploaded really fast and the navigation was clean and intuitive. Overall, the included Honeycomb OS is pretty refined and has had time to mature a bit from previous versions of Android. I was throughly disappointed with Samsung for not including their own TouchWiz UI when they shipped the first Tab 10.1s on June 8, especially since they are already advertising this UI on several vendors’ website that sell this product. It’s false advertising when you list a feature that isn’t available with the products when it is shipped to consumers. Other than that oversight, the Honeycomb OS is extremely snappy when tandemed with the Tegra 2 chip and all the preloaded software added new dimensions to the capabilities of the Tab 10.1.

To evaluate the Tab 10.1’s overall performance capabilities we ran several mobile benchmarks to see how it faired against ones of its competitors in the tablet market today – the Blackberry Playbook. To be consistent during testing, we ran both tablet displays at 50 percent brightness Wifi was enabled. We also wanted to test the tablet’s battery life so we performed several hours of web browsing, Word processing, basic photo editing, music listening, and video playback to determine how well the tablet, and the battery, would perform during these tasks. 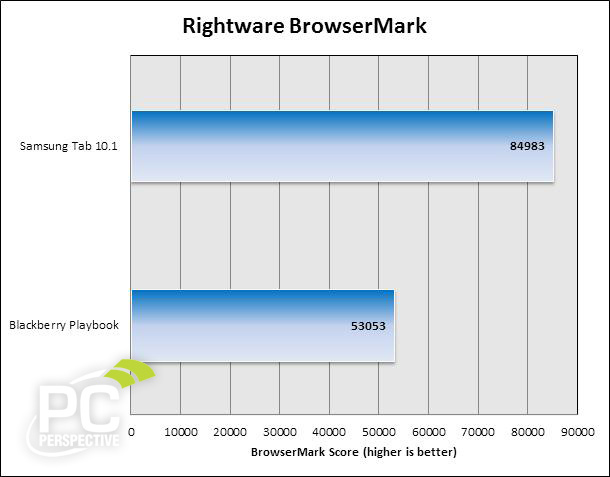 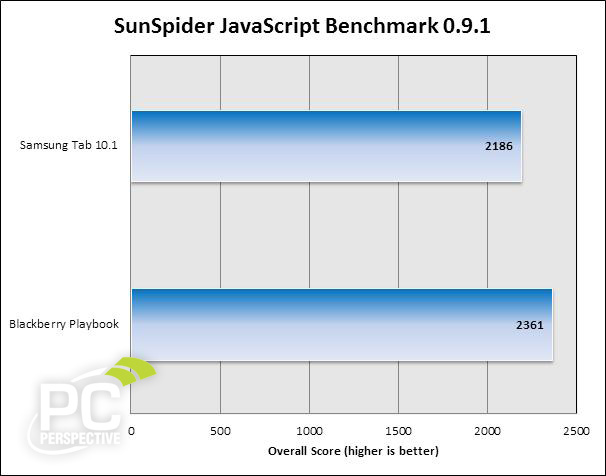 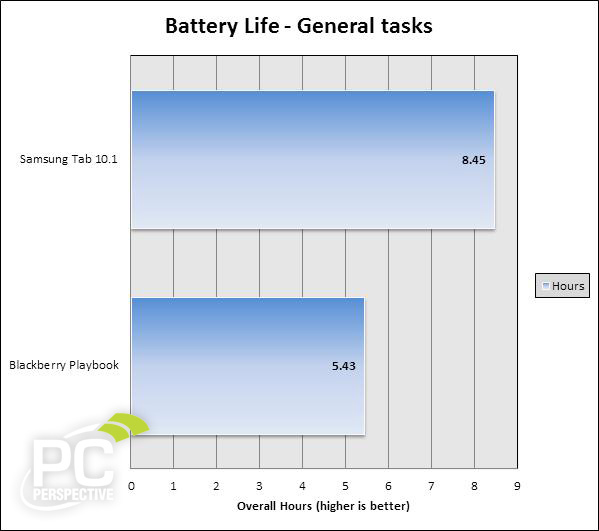 The results of our testing were a bit interesting as the Tab 10.1 seemed to excel during the battery life tests, but lost some ground in the SunSpider Javascript test, and then rebounded during the BrowserMark test. We averaged between 6 and 9 hours of battery life for the Tab 10.1 depending upon what general tasks were were doing. Under heavy loads that required lots of power (like video playback and encoding), but basic web browsing and word processing obviously took less power usage. On average, we estimated the Tab 10.1’s battery life to hover around 8.5 hours, which is more than adequate for consumers looking for a tablet that could function on its own throughout a normal work day or during a long flight or road trip. 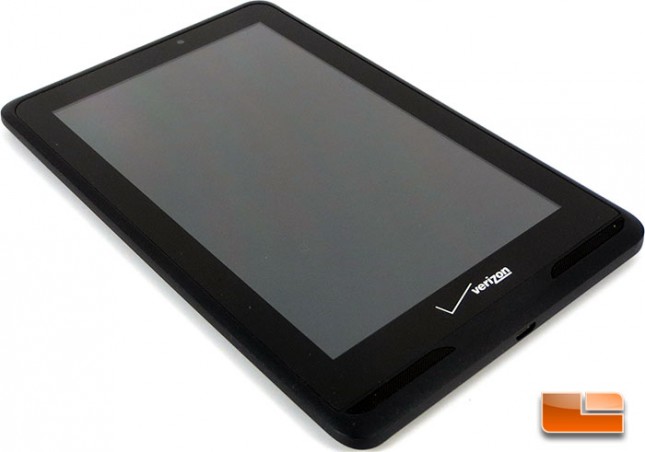 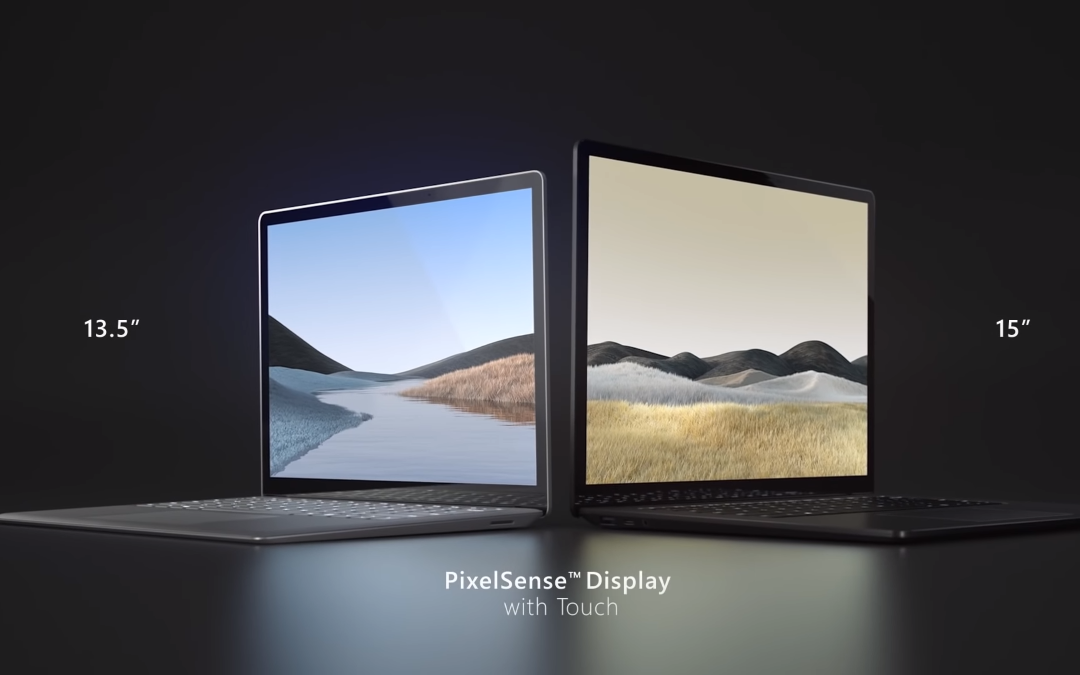 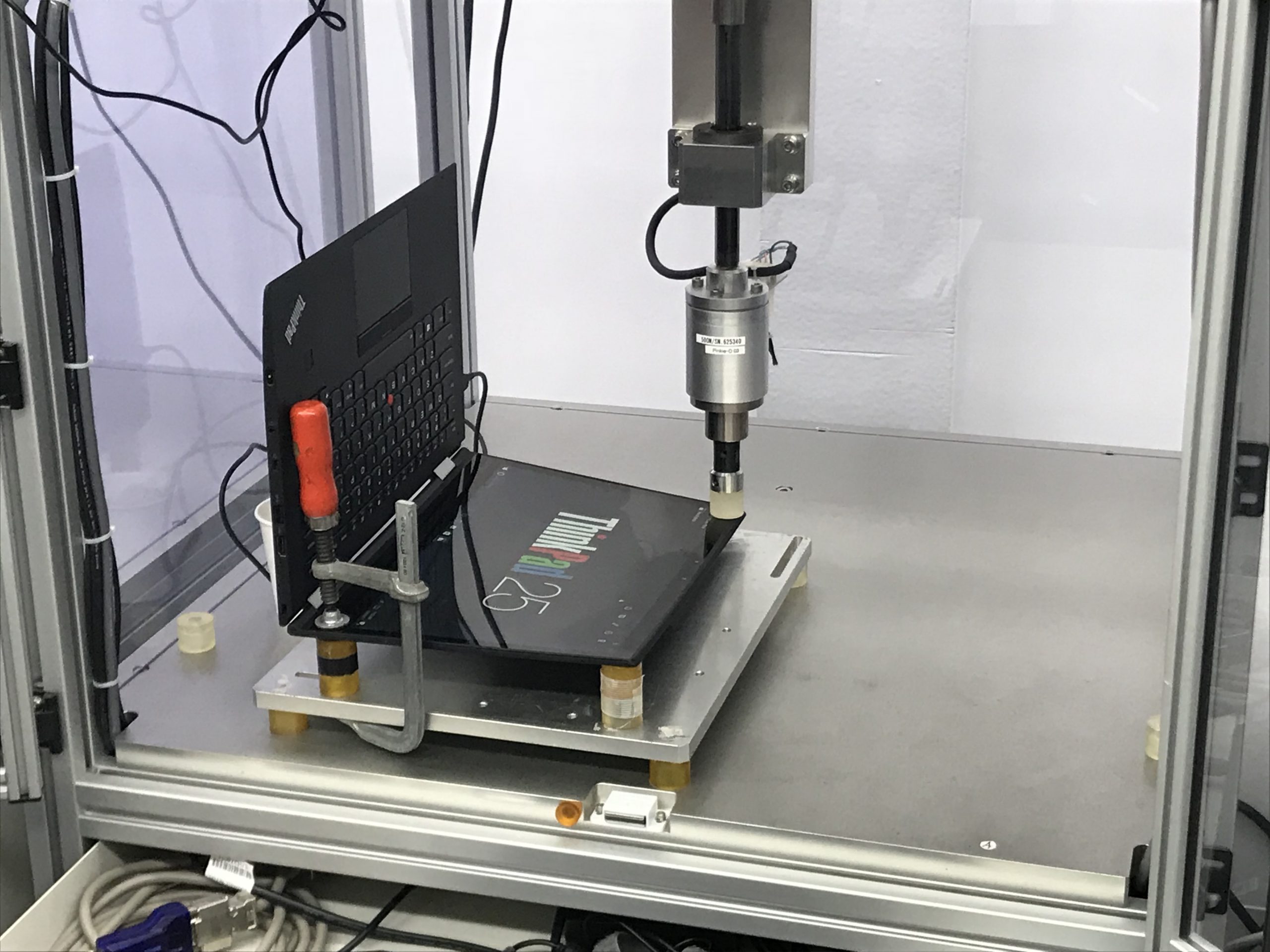