While on stage during today’s opening keynote at the Intel Developer Forum, Intel CEO Paul Otellini showed of a prototype processor running completely on a very small solar cell.

Paul on the left, Windows 7 in the center, prototype ultra-low power CPU on the right

Running Windows 7 and a small animated GIF of a cat wearing headphones, the unannounced CPU was being powered only by a small solar panel with a UV light pointed at it.  Though Intel didn’t give us specific voltages or power consumption numbers they did say that it was running at "close to the threshold of the transistors".  Assuming we are talking about the same or similar 22nm tri-gate transistors used in Haswell, we found this: 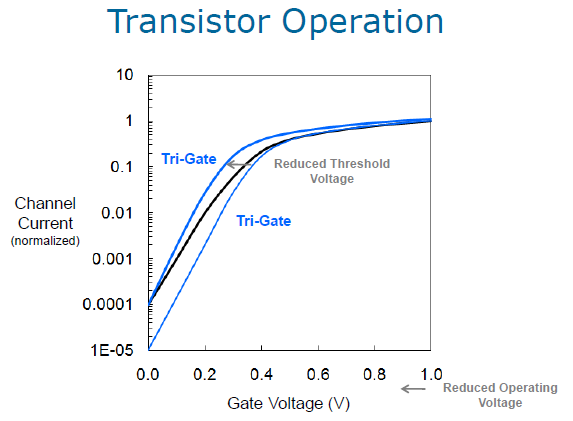 My mostly uneducated guess then was that they were able to run Windows 7 and this animation on a processor running somewhere around 0.1-0.2v; an impressive feat that would mean wonders for standby time and the all-day computing models.  This is exactly what Intel’s engineers have been targeting with their transistor and CPU designs in the last couple of years as it will allow Haswell to scale from desktop performance levels all the way to the smart phone markets on a single architecture. 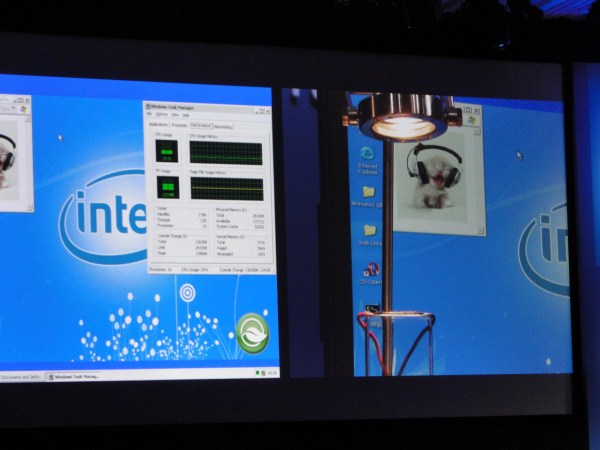 You can see the solar panel and UV light on the right hand side of this photo.  Interestingly, when the presenter moved his hand between the light source and the panel, the system locked up, proving that it was indeed being powered by it.