The overall efficiency of a power supply is very important, especially when the power supply is designed for passive cooling. The less waste heat generated the better! Efficiency is defined by the power output divided by the power input and is usually expressed as a percentage. If a PSU were a 100% efficient (which none are) 500 watts of AC power going in would result in 500 watts of DC power coming out (with no waste heat to dissipate). In the real world there are always inefficiencies and power is lost in the form of heat during the conversion process.

I measured the AC power input to the Kingwin Stryker 500W Fanless with the Extech power analyzer while the total DC load was found by adding all the individual +3.3V, +5V, +12V, -12V and +5VSB loads together. 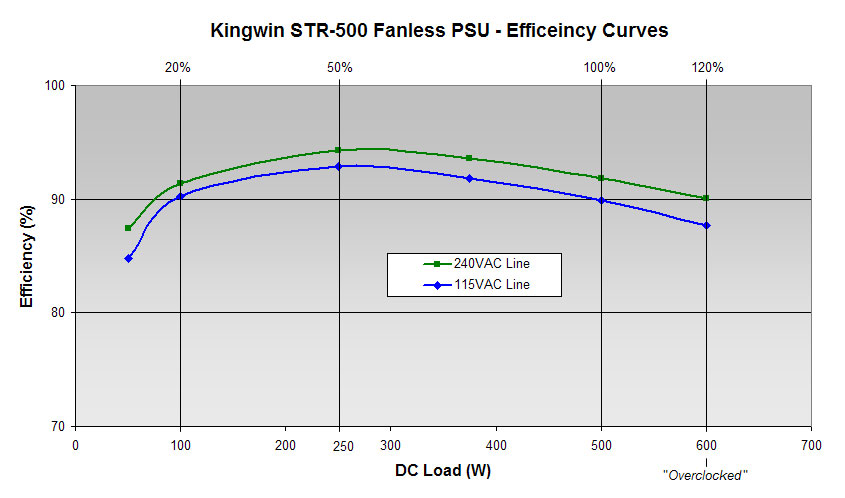 The overall efficiency of the Kingwin STR-500 fanless power supply is excellent and does in fact meet the new 80 PLUS Platinum certification criteria (see table below). As Kingwin clearly states, if you overclock the STR-500 to 600W, the efficiency falls off slightly but still easily meets the 80 Plus Gold criteria.

To simulate real world operation the Kingwin Stryker 500W Fanless power supply was mounted in a modified mid tower case (Lian Li PC60) during testing. Since this test environment does not include any case fans I simply removed the top of the case, which allows hot air to vent out thru the sides of the PSU, flow over the large external heatsink and rise unobstructed via natural convection.

Thermocouples were placed above and below the PSU with a third probe attached to the center of the large external heatsink. The ambient room air temperature was 23ºC (74ºF) +/- 0.5ºC during testing.

As expected, the Kingwin Stryker 500W Fanless PSU was dead silent, even when generating 500W of DC output. The high efficiency really helps reduce the amount of waste heat that needs to be dissipated but even so as power levels climb so did the temperature of the external heatsink. Under a 250W load the heat being given off by the PSU was approximately 15W and under a full 500W load the waste heat increased to about ~50W, which is still a significant load for passive cooling.

CAUTION!
And remember, just because the STR-500 PSU doesn’t have a fan does not mean that it doesn’t need adequate airflow to dissipate heat. Ideally, existing case fans should generate a flow of air around and/or through the PSU for cooling. If you plan to install the Kingwin fanless PSU in a case that doesn’t have any case fans then it will need to have plenty of open area around the PSU with an opening above to let the hot air out. Convection cooling relies on being able to draw cool air in through all four sides of the PSU and over the large external heatsink with an unrestricted path for hot air to flow out the top of the case. 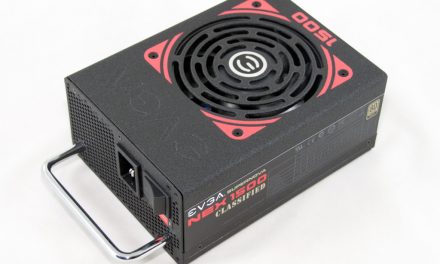 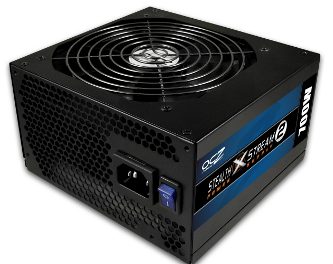