Our custom PCPer-FC test does some fairly simple file creation and copy routines in order to test the storage system for speed.  The script creates a set of files of varying sizes, times the creation process, then copies the same files to another partition on the same hard drive and times the copy process as well.  There are four file patterns that we used to try and find any strong or weak points in the hardware: 10 files @ 1000 MB each, 100 files @ 100 MB each, 500 files @ 10 MB each and 1000 files at 1 MB each. 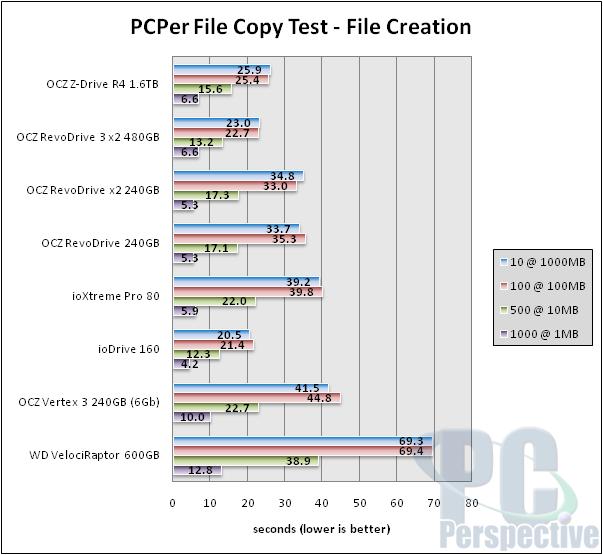 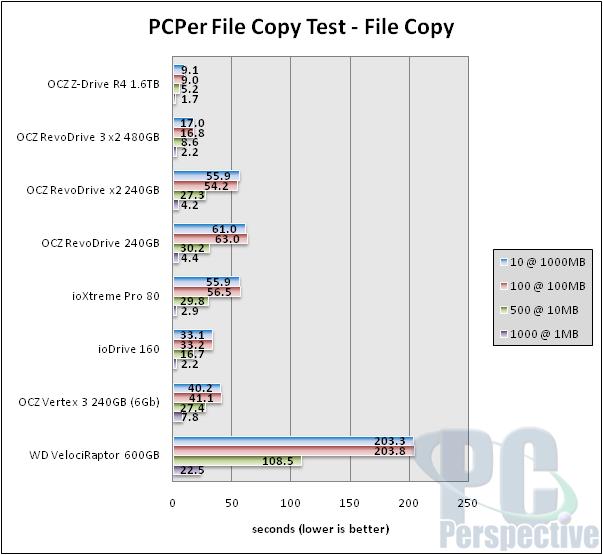 We knew it was going to happen eventually, and the R4 did it. It broke our File Creation test. It appears the method we were using to create the files makes them in a very single-threaded manner, and does so using smallish block writes. This type of write pattern can not be effectively scaled up without some sort of caching method at play. ioDrive’s are able to complete this particular test faster as there are less ‘links in the chain’, resulting in lower latencies for each single threaded small write.

Now, the File Copy test is an entirely different story. We use a simple CMD prompt batch copy of the files generated in the File Creation test. This lets Windows have its way with the Z-Drive. From what we see in the results, it appears to enjoy it immensely. 10x 1GB files, copied from *and back to* the same Z-Drive, took only 9 seconds! That requires a read/write throughput of over 2GB/sec (yes, GigaBYTES per second).

Also of note, the File Copy was over 3x faster than an ioDrive with 160GB of *SLC* flash, and 22x faster than the 600GB VelociRaptor!