Previous AMD processors have had a version of technology called Turbo Core, though in reality it was well behind the functionality found in Intel’s Turbo Boost technology.  Both of them attempt to achieve the same goal: take advantage the available TDP of a processor to better utilize cores when heavily or lightly threaded.  Essentially, when a CPU is only running one or two threads, it can bump up the frequencies of those two "cores" to a point higher than it would otherwise be able to do with more cores active.

When the FX processor detects that it has available TDP headroom, it can temporarily increase the clock speed (and thus the power draw) of the CPU in order to improve performance.  The frequency can go up a modest amount when even all 8 cores of the FX CPU are in use (a change from the previous iteration of Turbo Core) and go even higher higher when 4 or fewer cores are in use. 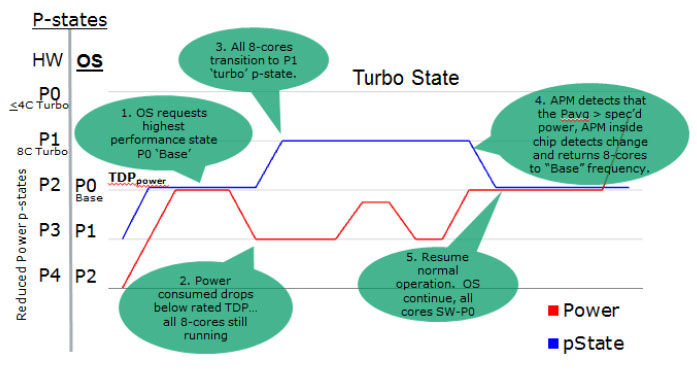 The "Max Core" mode as it is called allows our FX-8150 to jump from the 3.6 GHz base frequency to a speed of 3.9 GHz for a short period of time even when all 8 cores are in use.  In the diagram above the blue bar’s highest position is that 3.9 GHz setting and it is important to note that the time period that the CPU can run at that speed will vary based on the individual CPU, the cooling solution at work and some other indicators.

Bulldozer includes an integrated "AMD Power Manager" that monitors these conditions and tells the CPU when it should return back to the standard P0 base setting and clock speed. 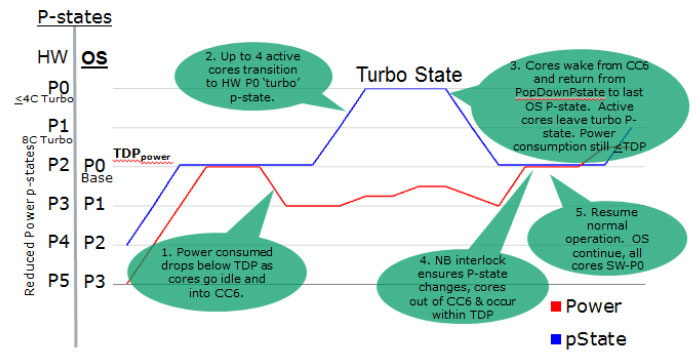 For lightly threaded apps, specifically those times when 4 or fewer cores are in use, the AMD FX processors can jump to a higher frequency of Turbo but will still eventually drop to the base state after some period of time.

Obviously the advantages of this technology from AMD are the same as they are from Intel: higher performance on single and dual-threaded applications than you would otherwise be able to achieve by taking advantages of the TDP headroom of a large die when only a portion of it is being utilized.

The various product SKUs from AMD on the FX lineup will specify both of these Turbo Core speeds: they all jump 300 MHz over the base clock to the "Max Core" stepping and then 300 MHz additional to the "Max Turbo" modes.

Obviously this capability not only helps the AMD FX processor keep up with the competition, but you will find later that it is absolutely necessary.

VIA Launches the C7 Processor