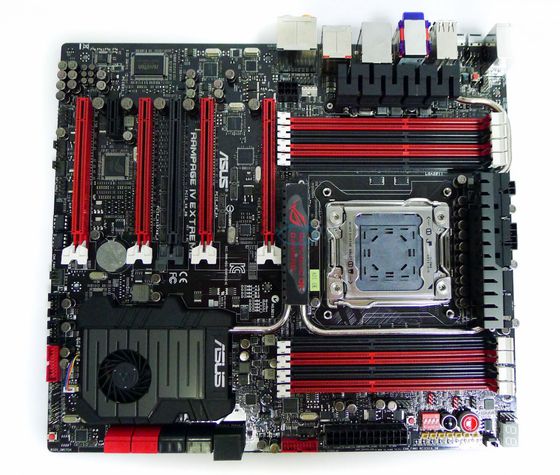 Asus recently unveiled a new X79 socket 2011 motherboard specifically for Sandy Bridge-E, and it looks rather impressive. The new motherboard is a red and black affair that hold several overclocking friendly features and plenty of expansion options. Dubbed the Rampage IV Extreme, the X79 motherboard is part of Asus’ Republic of Gamers lineup.

While the basic specifications of the motherboard are really nice, the most important aspects of the republic of gamers Rampage IV Extreme board are the overclocking features and diagnostics, and there are quite a few. Around the processor socket, there are chokes rated up to 50 amps and have VRMs cooled by a large black heatspreader. The RAM power circuitry, CPU VRMs, and chipsets are all cooled by heatspreaders and connected by aluminum heatpipes. The only issue that some people might run into is with CPU coolers that have wide bases as the heatpipe connecting the VRMs and chipset heatspreader is close to the processor socket, though most coolers will likely work fine.

Moving to the right of the Sandy Bridge-E socket, Asus has provided several handy overclocking tools including the "MEMOK!" RAM diagnostic button that will either reset the settings to get the board to boot or switch to overclocked profiles if activated after the motherboard has gotten past POST. Above that is a set of 4 dip switches to enable or disable the various PCI-E slots. A power and reset button are above those switches and will come in handy for overclocking the board outside of a typical case. Further, there is a diagnostic LED display in the upper right as well as a switch to enable a slow boot mode when using LN2 (liquid nitrogen) cooling. On the voltage front, there are numerous measurement points for CPU, RAM, and chipset voltages. Finally, next to the SATA ports is a odd looking four slot block that allows enthusiasts to measure temperatures of the various physical temperature diodes on the motherboard using "K-type thermocouple" device.

Needless to say, this new X79 based motherboard looks to be living up to its Republic of Gamers heritage thanks to its slew of overclocking and expansion features. If you’re interested in seeing more pictures of this shiny bit of hardware, check out this VR-Zone story.