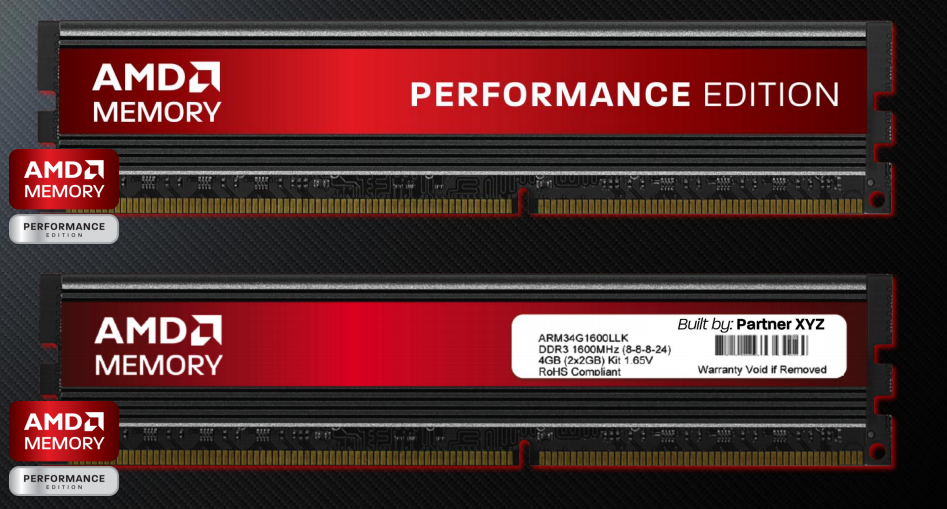 AMD has slowly but surely been taking over the desktop computer. The AMD brand is slowly encompassing all of the components inside AMD powered computers. For the past few years, the company has been heavily investing in and marketing the idea of an all AMD powered computer filled with parts certified to work with each other and deliver a consistent platform (ie Spider, Fusion, and AMD Vision) experience by using an AMD CPU, motherboard, and graphics card together.

It seems as if AMD was not happy with the amount of case badge stickers from other companies for the remaining parts; however, as the company officially announced today that AMD is bringing to market is own AMD branded DDR3 memory modules with the assistance of experienced memory manufacturers Patriot and VisionTek. VisionTek will be making the modules available in the US through their distributor D&H, while the Patriot modules are generally available in the US already.

A close up shot of the Performance Edition provided by AMD.

The new AMD RAM will be controlled end-to-end on the design, oversight, and certification side by AMD while the physical processes of constructing and mass producing the modules will be in the hands of partners (currently Patriot and VisionTek). AMD will offer three speed tiers with capacities including 2 GB, 4 GB, and 8 GB (matched 4GB kits). Specifically, the three speed tiers will be labeled Entertainment Edition, Performance Edition, and Radeon Edition memory in order of slowest/cheapest to fastest (and most expensive). The Entertainment Edition should be shipping soon in the last quarter of 2011 and has at least a planned soft launch of November 2011. Entertainment Edition memory will be the slowest tier, weighing in at 1333 MHz or 1600 MHz and will be best suited for low power systems and HTPC applications. Performance Edition on the other hand will come only in 1600 MHz, low latency, and matched pair modules. This middle tier of AMD RAM is planned to launch in January of 2012. Last up is the Radeon Edition DDR3 which will come in 1866 MHz RAM that has been tuned, tested, and certified for certain system configurations.

To make things a bit more interesting, AMD will be allowing software overclocking of the DDR3 RAM via its AMD OverDrive application, along with planned support for Intel XMP memory overclocking profiles.

The company is claiming up to a 20 % platform performance increase in gaming, and in our own tests we did find a noticeable increase in performance with AMD’s Llano APUs when using higher clocked memory modules. For example, in Dirt 3 the system was able to hit a minimum of 31 FPS (frames per second) when using the A-3850 APU and 1866 MHz whereas with slower clocked modules, the system dipped under the ideal 30 FPS minimum that gamers like to see. Further, by using higher clocked RAM, we managed to get a 25 % increase in performance out of StarCraft II, so AMD’s claims aren’t too far off the mark. 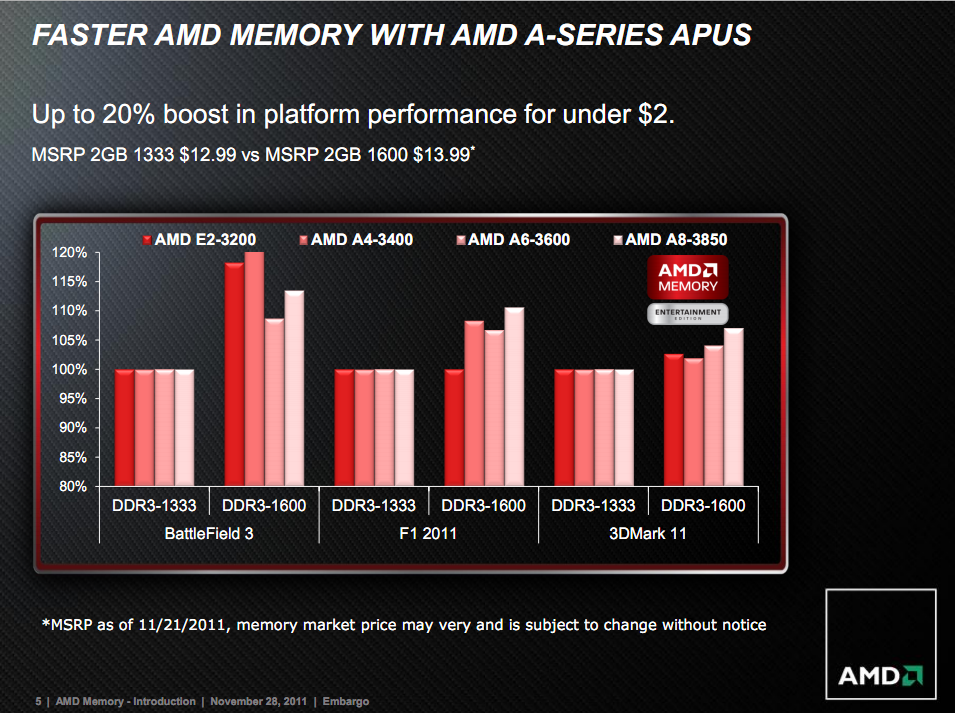 I’ll admit that when rumors surfaced a few months ago that AMD might be entering the DRAM market, I was a bit worried. The company has only recently stopped seeing red on their profitability statements, and the DRAM market has notoriously thin margins. Especially after the lackluster Bulldozer launch and bout of layoffs, I really did not want to see AMD try to spread itself too thin. On the other hand, they are not doing the manufacturing themselves, opting to leave the physical processes up to other companies who are already in the business and know how to stay afloat in the crowded waters. The branding and ability for AMD to offer a platform consisting of an AMD CPU, graphics card, motherboard, and RAM is an advantage that their competition simply can’t match, and its good to see the company taking advantage of that. I don’t expect AMD to start making power supplies, hard drives (though I wouldn’t say no to a nice Radeon RAM Drive 😉 ), and cases, but the core components are now all united under the AMD banner and the barrier to entry for new DIYers (do it yourself/self built computers) is now lower. As long as the company can make it work, I’m all for it. What do you guys think of the new AMD branded RAM, is it something you’d use?