Can Your Laptop Handle BF3?

As you might have noticed, we’re a bit excited about Battlefield 3 here at PC Perspective. It promised to pay attention to what PC gamers want, and shockingly, it has come through. Dedicated servers and huge multi-player matches are supported, and the browser based interface is excellent.

If we’re honest, a lot of our hearts have been stirred simply by the way the game looks. There aren’t many titles that really let a modern mid-range graphics card stretch its legs, even at 1080p resolution. Battlefield 3, however, can be demanding – and it looks beautiful. Even with the presets at medium, it’s one of the most attractive games ever.

But what does this mean for laptops? Has the resident laptop reviewer at PC Perspective, I know that gaming remains a challenge. The advancements over the last few years have been spectacular, but even so, most of the laptops we test can’t run Just Cause 2 at a playable framerate even with all detail set to low and a resolution of just 1366×768.

To find out if mobile gamers were given consideration by the developers of Battlefield 3, I installed the game on three different laptops. The results only go to show how far mobile gaming has come, and has far it has to go.

Dell Inspiron 14z: No Such Luck 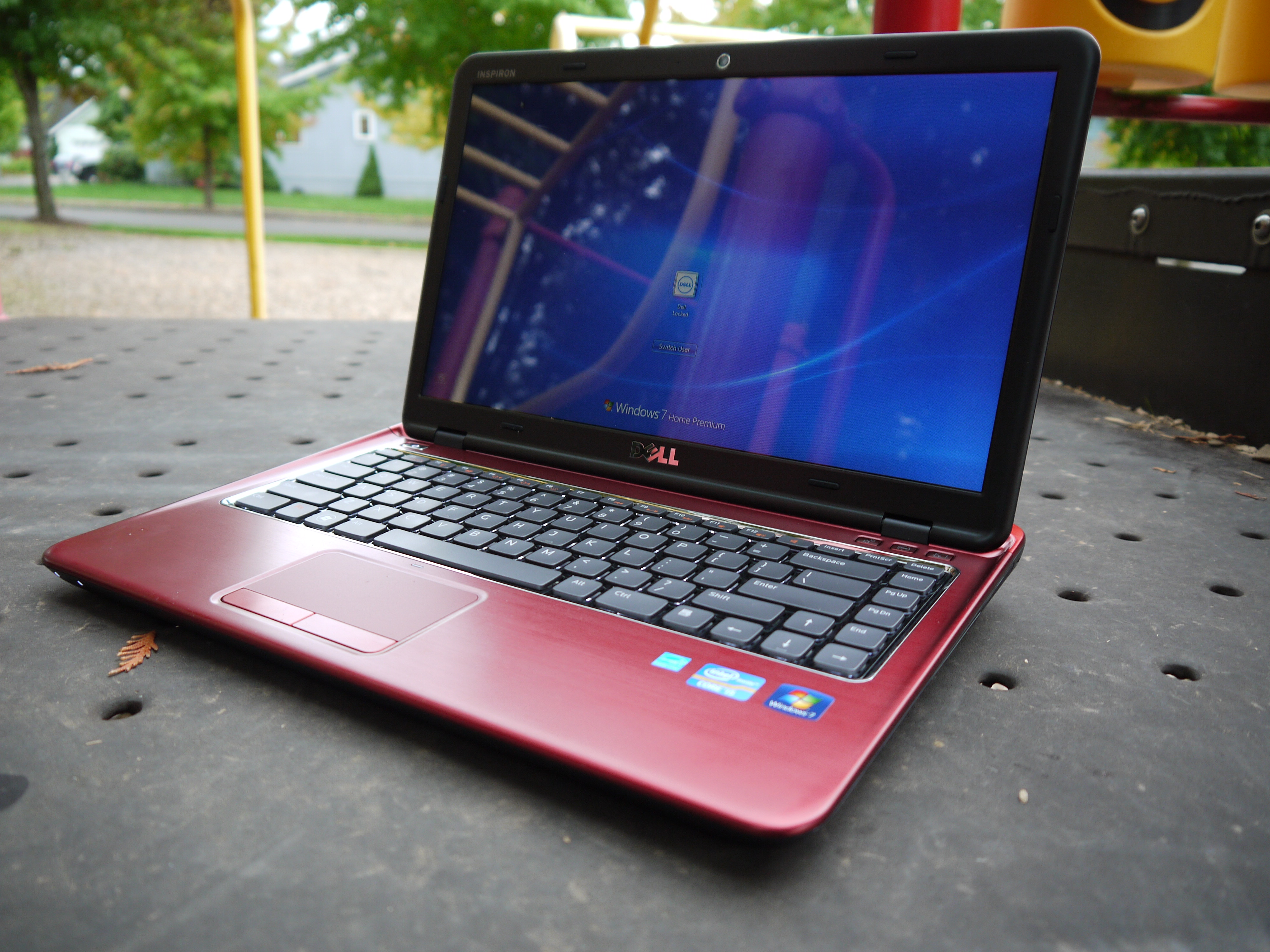 First up for testing was the Dell Inspiron 14z, a recently reviewed system. You can read the full details in your review, but the basics are this. It’s a somewhat slim system with a 14.1” display and Intel Core i5 processor. Graphical power is provided by the Intel HD 3000 IGP.

I installed Battlefield 3, loaded it, and…nothing. Literally nothing. No flicker, no error message, no stubbornly minimized window. Battlefield 3 simply refused to launch. Since I’d previously played the game on my desktop, I wondered if the settings had carried over and perhaps tripped up the Dell. I changed then, but still…nothing.

To Google I went, and soon found user complaints and/or warnings that the Intel HD 3000 IGP was not supported. My test had come to a premature end.

Some people responding to the users complaining about this were a bit mean about it (of course) stating that no one should be able to expect games on Intel HD graphics. That’s just a load of hooey. As has been shown time and time again in our test, Intel HD graphics is capable of reasonably competent performance. It’s generally on par with entry-level discrete mobile graphics from a generation ago.

With the Dell Inspiron 14z out of commission, it was time to bring out the big guns – Alienware’s m17x. Equipped with Core i7-2630QM processor, Radeon HD6990M graphics and a whopping 16GB of RAM, it’s no slouch. And, more importantly, it will start the game.

To begin, let’s do an analysis of performance at each of the presets available in the game; low, medium, high, and ultra. 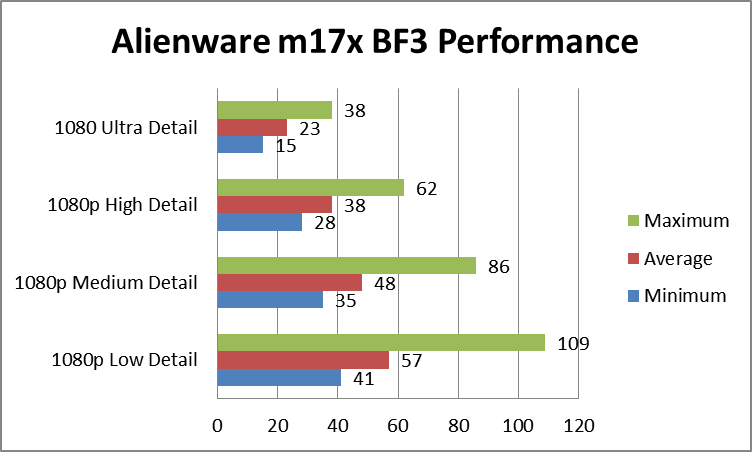 Remember, this is a high-end laptop with a quad-core processor and outstanding graphics, yet even this m17x does not provide playable framerates at Ultra in the single-player campaign at 1080p resolution (shew! that’s a lot of qualifiers). High is perfectly tolerable, although there are rare moments where it feels a little hesitant. Gamers who are twitch-obsessed will probably want to play on medium.

Of course, any player’s decision about the settings they’d like to use is going to be somewhat dependent on the visual payoff. Does ultra really look much better than high, for example? To find out, I took a couple screenshots at each preset. 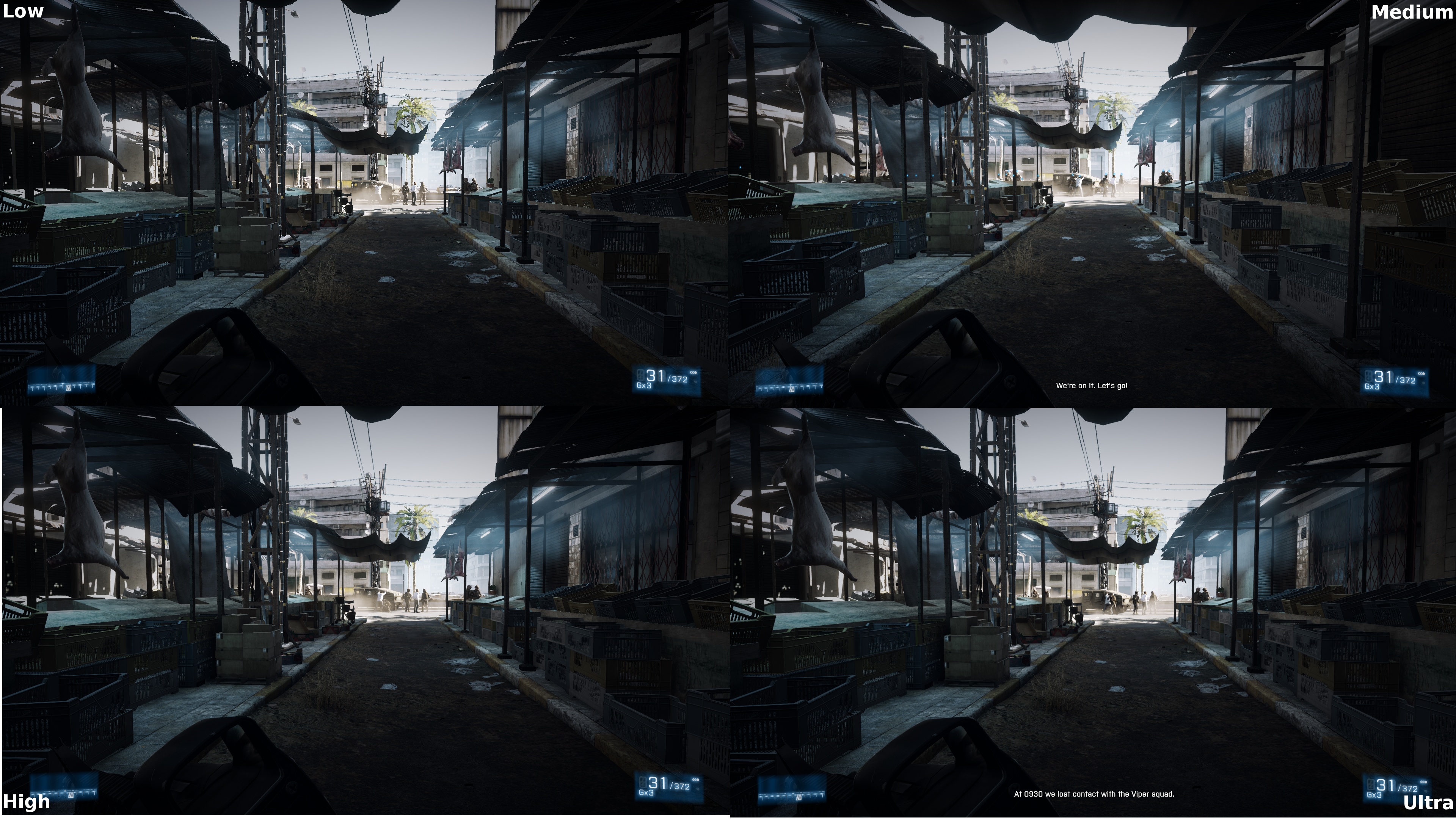 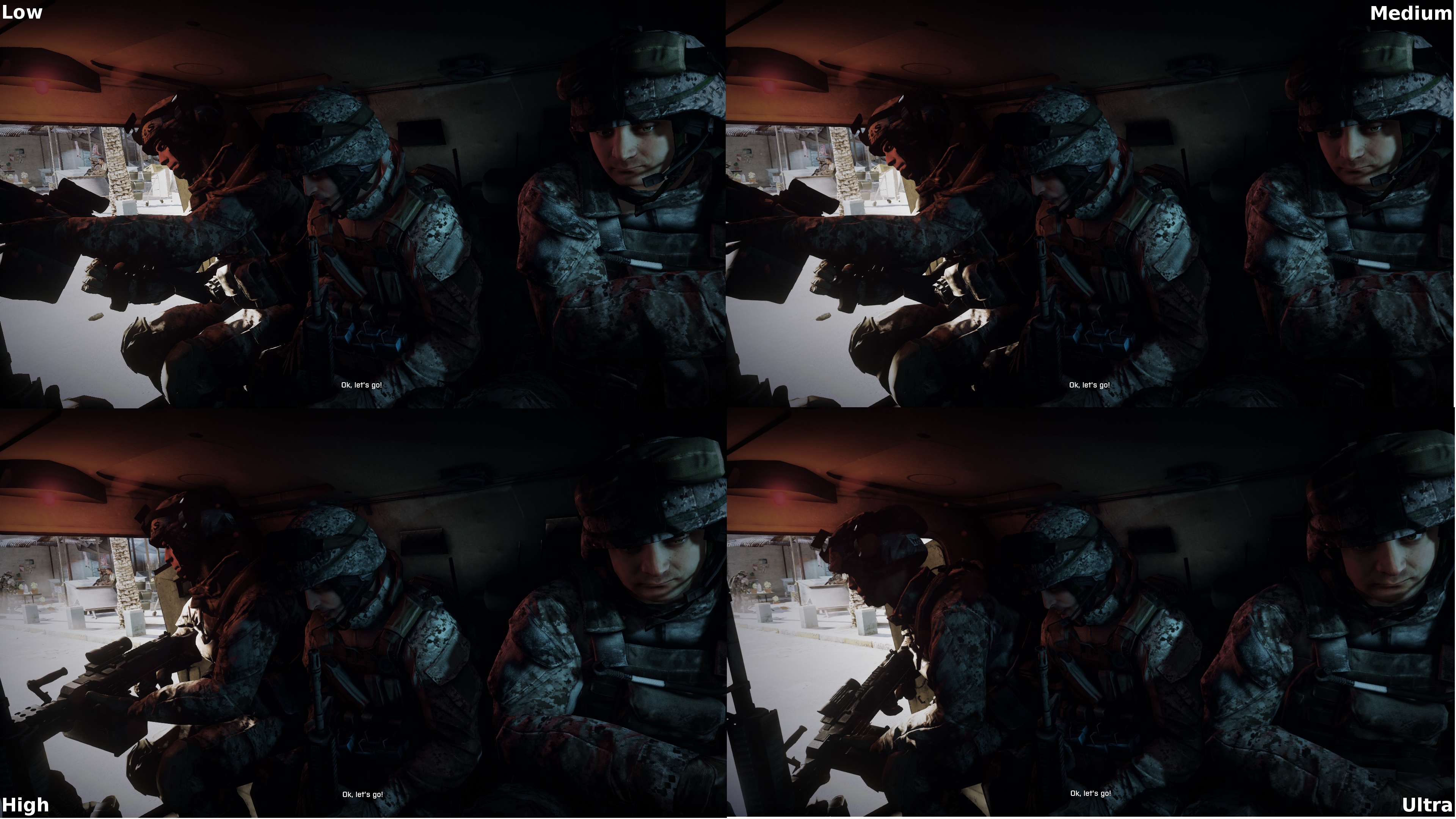 In screenshots, the difference between medium/high and high/ultra can be difficult to notice, although it is there. Low, on the other hand, is very obviously worse than all of the others thanks to a lack of anti-aliasing and jagged shadows.

I found image quality differences to be more noticeable in real-world gameplay. A lot of the improvement comes from lighting effects, which are excellent on high and sometimes jaw-dropping on ultra. One room early in the game contains a beam of light that comes in through high windows. On low, it’s kind of neat. On ultra, it’s absolutely beautiful.

SSD vs Rotating Media in a laptop