EVGA impressed us earlier in the year with the GTX 460 2WIN and the GTX 560 Ti 2WIN promises the same with a custom dual-GPU design.

Dual-GPU graphics cards are becoming an interesting story.  While both NVIDIA and AMD have introduced their own reference dual-GPU designs for quite some time, it is the custom build models from board vendors like ASUS and EVGA that really peak our interest because of their unique nature.  Earlier this year EVGA released the GTX 460 2Win card that brought the worlds first (and only) graphics card with a pair of the GTX 460 GPUs on-board.

ASUS has released dual-GPU options as well including the ARES dual Radeon HD 5870 last year and the MARS II dual GTX 580 just this past August but they were both prohibitively rare and expensive.  The EVGA "2Win" series, which we can call it now that there are two of them, is still expensive but much more in line with the performance per dollar of the rest of the graphics card market.  When the company approached us last week about the new GTX 560 Ti 2Win, we jumped at the chance to review it.

The new GTX 560 Ti 2Win from EVGA follows directly in the footsteps of the GTX 460 model – we are essentially looking at a pair of GTX 560 Ti GPUs on a single PCB running in SLI multi-GPU mode.  Clock speeds, memory capacity, performance – it should all be pretty much the same as if you were running a pair of GTX 560 Ti cards independently.

Just as with the GTX 460 2Win, EVGA is the very first company to offer such a product.  NVIDIA didn’t design a reference platform and pass it along to everyone like they did with the GTX 590 – this is all EVGA.

The card length is pretty big coming in at 11.5-in and matches the size of the Radeon HD 6990.  The three fan cooling design is both quiet and efficient and I didn’t notice any significant noise during the testing process. 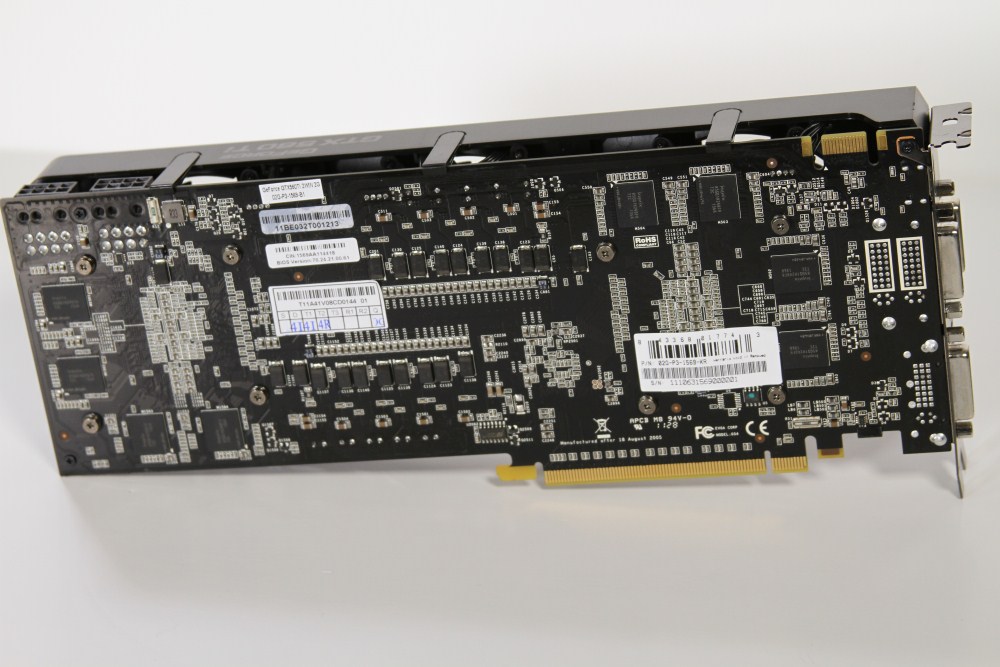 The back of the card shows us the placement of the two GTX 560 Ti GPUs, each housing 384 CUDA cores and able to access 1GB of memory.  The core clock speeds are set at 850 MHz, just a bit higher than the 822 MHz reference clock and the memory speeds are still set at 1002 MHz / 4008 MHz effective.  Keep in mind that even though the card does have 2GB of memory, each GPU only gets to access half of that.

You might also notice there is an SLI connection on the card – according to EVGA the GTX 560 Ti 2Win still does not support adding in any other GPUs for additional SLI action.  Why they continue to leave the connection on the PCB is beyond me – they did the same thing on the GTX 460 2Win.

The display outputs include three dual-link DVI connections and a single mini-HDMI port, all of which can be run at the same time.  This card can even run NVIDIA Surround and 3D Vision Surround modes with three displays where most single graphics cards (other than the GTX 590 for example) are limited to two monitors. 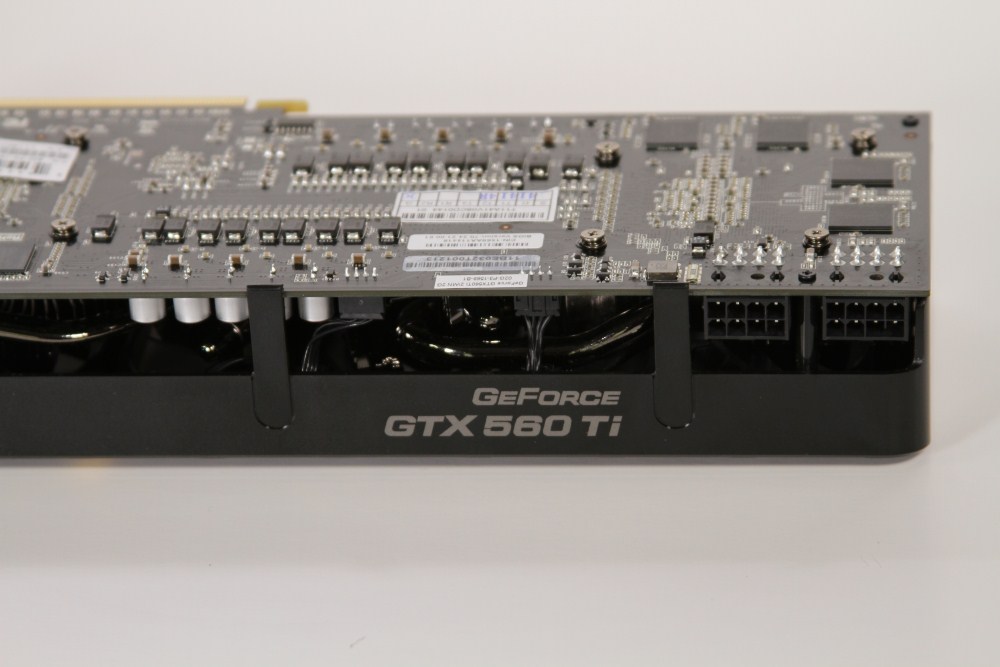 The power connections on the card do require a bit more juice than even the GTX 580 – dual 8-pin ATX power is needed.  As we’ll see in our power testing, the EVGA GTX 560 Ti 2Win actually is a bit more efficient than a pair of the cards thanks to less redundant hardware to push. 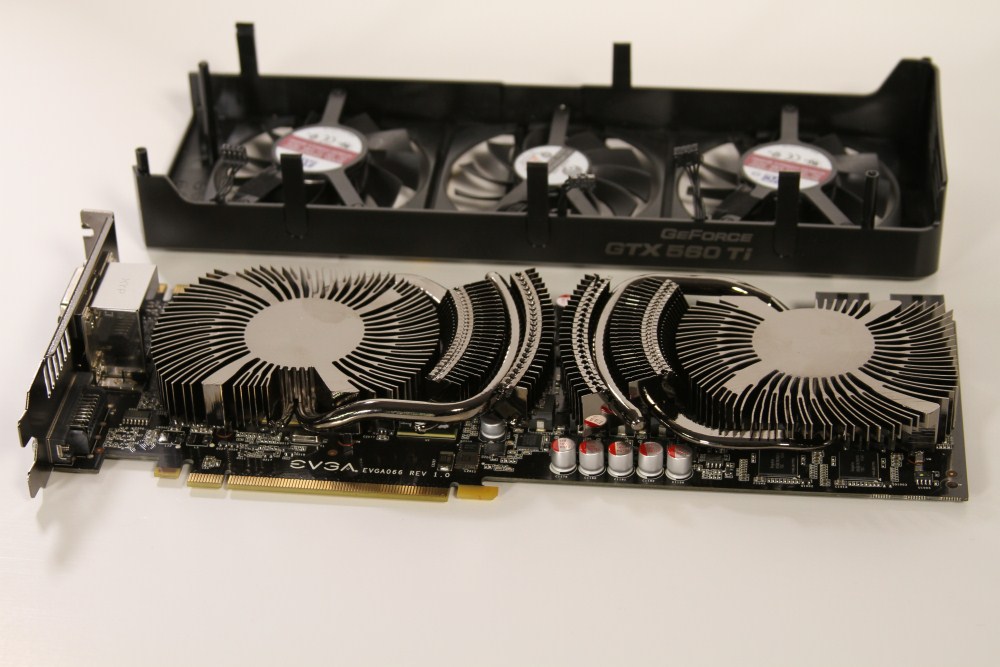 Taking apart the card we find each GPU with its own separate cooler, both of which are modest in weight but still seem to do a great job keeping the GPUs cool with a load temperature of 71C according to GPU-Z. 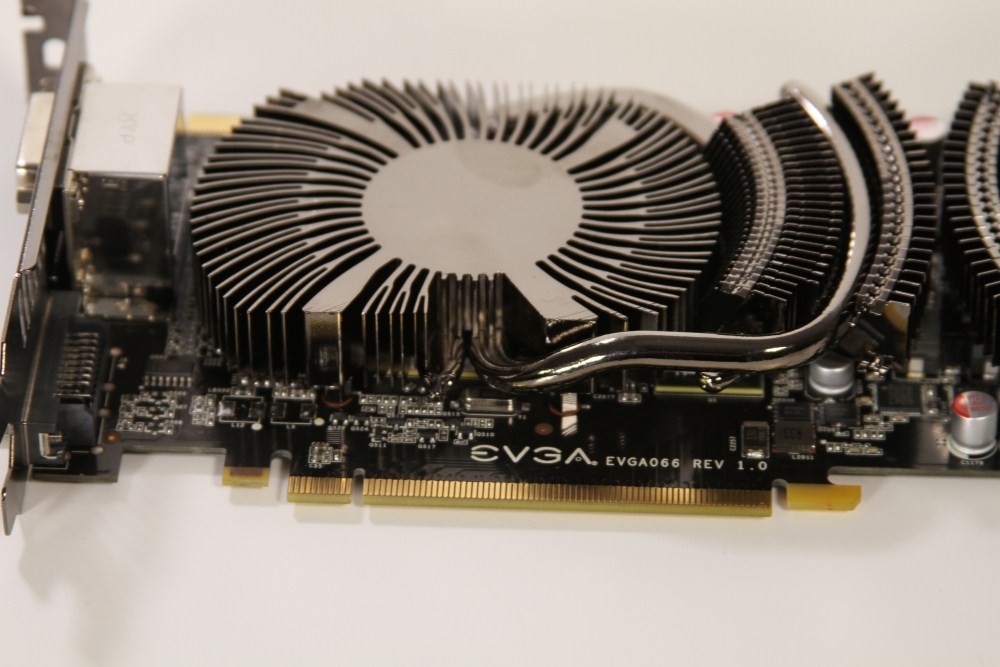 Hidden under the left most cooler is the same PCI Express 2.0 bridge chip used to split the connection from the motherboard to each GPU on the PCB. 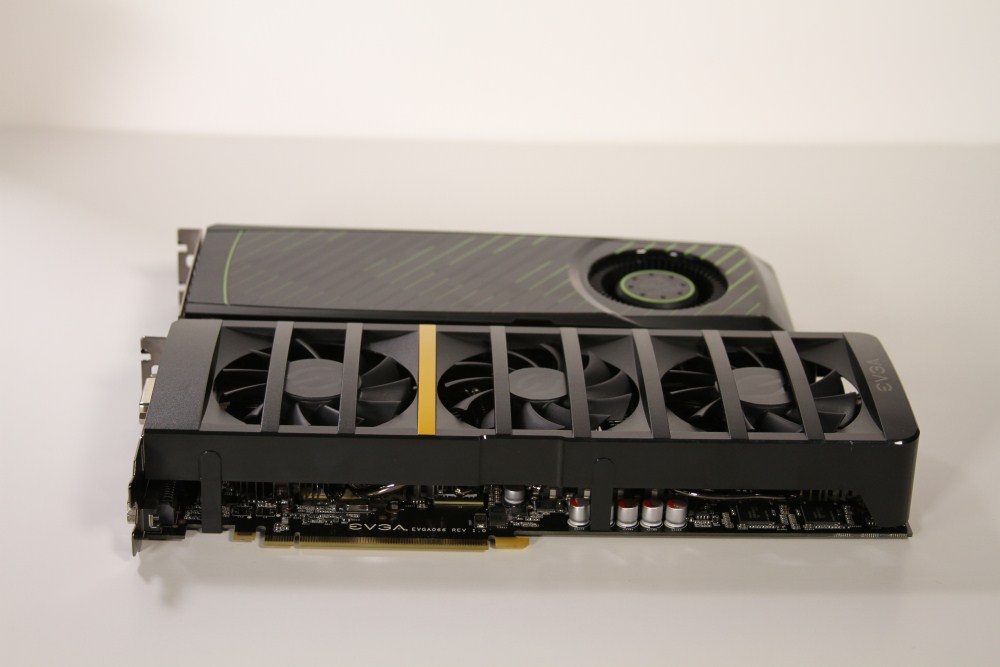 For a quick size comparison we set the new EVGA GTX 560 Ti 2Win next to the GTX 580 reference card.  You can clearly see you are going to need a bit more space in your case to fit all 11.5-in.