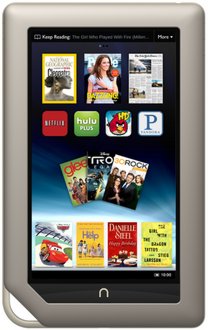 Hot on the heels of the Kindle Fire announcement, Barnes & Noble is readying it’s own touchscreen tablet and ebook reader. Set to officially launch November 17th, the new Nook tablet is very similar to the Kindle Fire in physical dimensions; however, the hardware and software are a bit different. The new Nook Tablet measures 8.1” x 5” x .48” thick and will retail for $249 USD. It is currently available for pre-order now.

Weighing in at 14.1 ounces, the new tablet runs a customized version of Google’s Android operating system using some decent hardware. On the outside the gray colored chassis sports a 7” VividView IPS touchscreen display with a resolution of 1024 x 600 pixels (169 PPI). A 3.5 mm headphone jack, mono speaker, charging port, and microSD card slot are located along the edges of the tablet along with a microphone.

Powering the Nook Tablet is a Texas Instruments OMAP4 dual core processor running at 1 GHz and 1 GB of system RAM. Along with 16 GB of built in memory (expandable with up to a 32 GB microSD card.), the new Nook is trying to double up on the specifications of the Kindle Fire which has a single core TI OMAP 4 and 512 MB system RAM. In fact, the marketing documentation that was leaked last week clearly shows the company heavily pushing the increased hardware. The Nook Tablet also features Wi-Fi (no 3G connection), and a claimed battery life of up to 4 hours playing video with the Wi-Fi on or 11.5 hours of reading with Wi-Fi off. A slew of applications are included on the device for email, web browsing, Hulu plus, Netflix, and several other content providers.

The tablet supports the following formats:

The marketing materials heavily pit the Nook Tablet against the Kindle Fire, even going so far as to dig at the Amazon Silk browser for privacy concerns that B&N’s tablet doesn’t have. What’s interesting is that the Nook isn’t being compared to other Android tablets. On the other hand, the Kindle Fire is the first Android tablet to be a successful launch even before the device has launched so it is only natural for Barnes & Noble to try to emulate that success and to heavily compare their product to the Kindle Fire. The customized nature of both the Kindle Fire and Nook Tablet really help to differentiate themselves from all the other vanilla Android tablets and are likely a cornerstone to the success.

On a personal level, my friends had never heard of the Transformer, Xoom, or Dell Streak but they knew just as much as I did about the Kindle Fire and jumped at the chance to pre-order it. Both the Nook Tablet and Kindle Fire are set to officially launch this month, so it will be interesting to see how it shakes out as far as market share and whether or not the extra $50 for better hardware of the Nook will outweigh the Amazon juggernaut’s ecosystem (the app store, marketplace, kindle library, etc).

What do you think is more important in this customized 7” tablet/ereader market?

UPDATE: Amazon is now stating that the Kindle Fire is running a dual core processor, not the single core I mentioned above.

The rumours of VIA’s desktop demise …