It is going to be an exciting 2012. Both AMD and NVIDIA are going to be bringing gamers entirely new GPU architectures, Intel has Ivy Bridge up its sleeve and the CPU side of AMD is looking forward to the introduction of the Piledriver lineup. Today though we end 2011 with the official introduction of the AMD Southern Islands GPU design, a completely new architecture from the ground up that engineers have been working on for more than three years.

This GPU will be the first on several fronts: the first 28nm part, the first cards with support for PCI Express 3.0 and the first to officially support DirectX 11.1 coming with Windows 8. Southern Islands is broken up into three different families starting with Tahiti at the high-end, Pitcairn for sweet spot gaming and Cape Verde for budget discrete options. The Radeon HD 7970 card that is launching today with availability in early January is going to be the top-end single GPU option, based on Tahiti.

Let’s see what 4.31 billion transistors buys you in today’s market.  I have embedded a very short video review here as well for your perusal but of course, you should continue down a bit further for the entire, in-depth review of the Radeon HD 7970 GPU.

Before we get into benchmark results we need to get a better understanding of this completely new GPU design that was first divulged in June at the AMD Fusion Developer Summit. At that time, our own lovely and talented Josh Walrath wrote up a great preview of the architecture that remains accurate and pertinent for today’s release. We will include some of Josh’s analysis here and interject with anything new that we have learned from AMD about the Southern Islands architecture.

When NVIDIA introduced the G80, they took a pretty radical approach to GPU design. Instead of going with previous VLIW architectures which would support operations such as Vec4+Scalar, they went with a completely scalar architecture. This allowed a combination of flexibility of operation types, ease of scheduling, and a high utilization of compute units. AMD has taken a somewhat similar, but still unique approach to their new architecture.

Instead of going with a purely scalar setup like NVIDIA, they opted for a vector + scalar solution. The new architecture revolves around the Compute Unit, which contains all of the functional units. The CU can almost be viewed as a fully independent processor. The unit features its own L1 cache, branch and MSG unit, control and decode unit, instruction fetch arbitration functionality, and the scalar and vector units.

The vector units are the primary workers in the CU when it comes to crunching numbers. Each unit contains four cores, and allows for four “wavefronts” to be processed at any one time. Because AMD stepped away from the VLIW5/4 architectures, and have gone with a vector+scalar setup, we expect to see a high utilization of each unit as compared to the old. We also expect scheduling to be much easier and efficient, which will again improve performance and efficiency. The scalar unit will actually be responsible for all of the pointer ops as well as branching code. This particular setup harkens back to the Cray supercomputers of the 1980s. The combination of scalar and vector processors was very intuitive for the workloads back then, and that follows onto the workloads of today that AMD looks to address.

The combination of these processors and the overall design of each CU gives it the properties of different types of units. It is a MIMD (multiple instructions multiple data) in that it can address four threads per cycle per vector, from different apps. It acts as a SIMD (single instruction multiple data) much like the previous generation of GPUs. Finally it has SMT (symmetric multi-threading) in that all four vector cores can be working on different instructions, and there are 40 waves active in each CU at any one time. Furthermore, as mentioned in the slide, it supports multiple asynchronous and independent command streams. Essentially the unit is able to work on all kinds of workloads at once, no matter what the source of the data or instructions are. 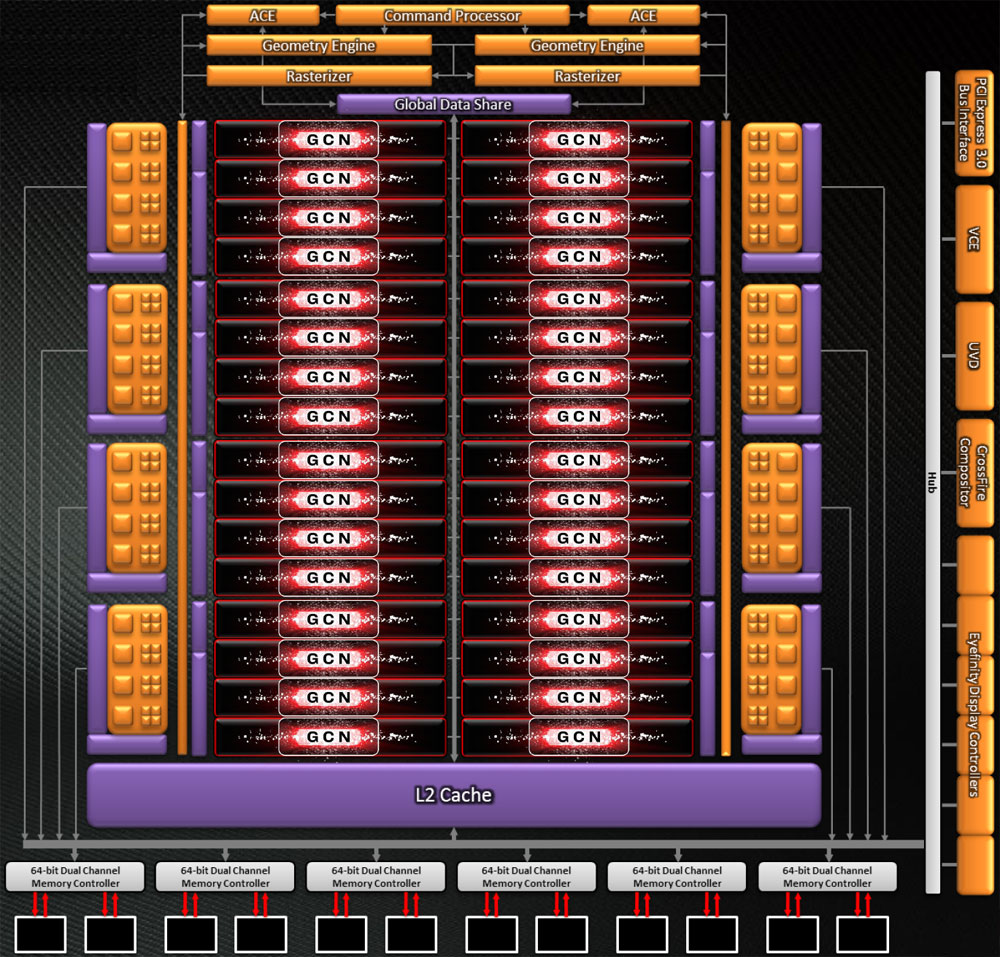 A full Tahiti GPU will feature 32 of the Compute Units, each made up of 64 stream processors. That brings the entire GPU to a total of 2048 SPs, a 33% jump over the Cayman architecture that was built around 1536 processors.

One area that AMD did detail extensively was the changes in the internal cache, as well as their push for fully virtualized memory. Each CU has its own L1 cache divided into data, instruction, and load/store. The GPU then has shared L2 cache which is fully coherent. Each L1 cache has a 64 bit interface with the L2, and once this scales in terms of both CU count and GPU clockspeed, we can expect to see multiple terabytes per second of bandwidth between the caches. The L1 caches and texture caches are now read/write, as compared to the read only units in previous architectures. This is a big nod not only to efficiency and performance, but also the type of caches needed for some serious compute type workloads. 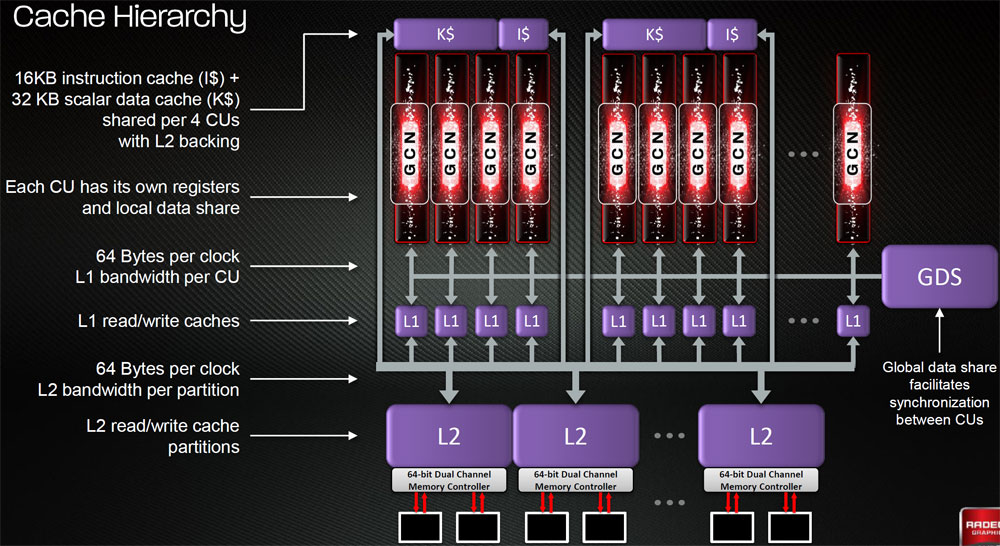 The next level of memory support is that of full virtualization of memory with the CPU. Previous generations of products were limited to what memory and cache were onboard each video card. This posed some limitations on not just content in graphics, but were also problematic in compute type scenarios. Large data sets proved to be troublesome, and required a memory virtualization system which was separate from the CPUs virtual memory. By adopting x86-64 virtual memory support on the GPU, this gets rid of a lot of the problems in previous cards. The GPU shares the virtual memory space, which improves data handling and locality, as well as gracefully surviving unhappy things like page faults and oversubscriptions. This again is aimed at helping to improve the programming model. With virtual memory, the GPU’s state is not hidden, and it should also allow for fast context switches as well as context switch pre-emption. State changes and context switches can be quite costly, so when working in an environment that features both graphics based and compute workloads, the added features described above should make things go a whole lot smoother, as well as be significantly faster, thereby limiting the amount of downtime per CU. 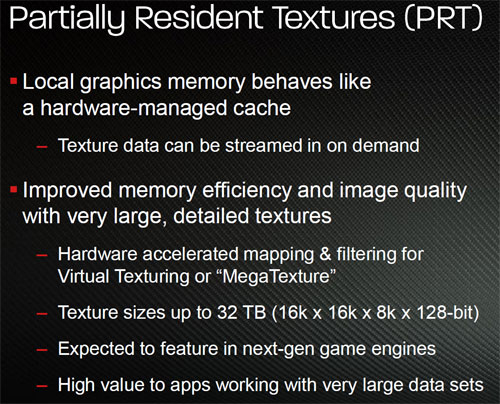 It also opens up some new advantages to traditional graphics. “Megatextures” which will not fit on a card’s frame buffer can be stored in virtual memory. While not as fast as onboard, it is still far faster than loading up the texture from the hard drive. This should allow for more seamless worlds. I’m sure John Carmack is quite excited about this technology.

Obviously the 32 CU on Tahiti make up the majority of the architecture but there are several other keys to look at.  Just as we saw with Cayman, Southern Islands will offer dual geometry engines for improved scalability as well as eight render back-ends with 32 ROP engines. 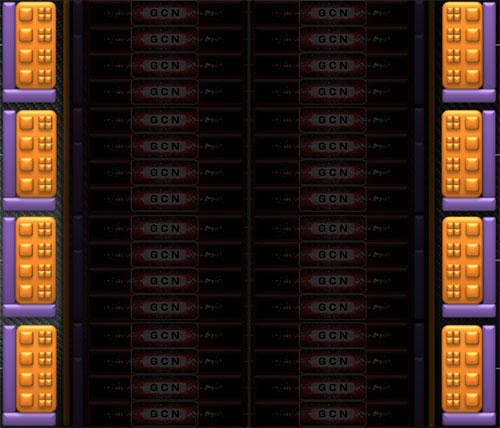 The memory interface gets a nice boost moving from the 256-bit GDDR5 interface on Cayman to a 384-bit interface capable of 264 GB/sec of bandwidth.  There are six individual 64-bit dual-channel memory controllers that create an unbalanced render back-end ratio of 4:6.

And of course, the architecture rounds out with the controllers for the PCI Express 3.0 interface capable of 8 GigaTransfers / second (essentially double that of PCIe 2.0), Eyefinity display controllers, UVD engine, CrossFire compositor, etc.  All of this adds up to an amazing 4.31 billion transistors on a 28nm process technology inside a 365mm2 die.

You might be wondering why we don’t have the typical die shot of the lovely new 28nm Tahiti GPU.  In truth, I have no answer for you, other than we asked several times and were told in each instance that they didn’t have one.  While this did arouse some suspicion from us as the the design of Tahiti, AMD assured us there were no tricks up its sleeve, the die was built with 36 CUs with 4 disabled, for example.