PowerTune technology was introduced by AMD with the 6000 series of cards in order to address the issue of "problem applications" that cause the usage and thermals of a graphics card to get out skew with reality.  Programs like Furmark and OCCT SC8 that were built basically as stress tests for graphics cards and GPUs had a bad habit of frying components when pushed to their limits.  AMD and NVIDIA both saw this as a negative for the industry – it caused them to be more tentative with their clock speeds on GPUs in order to save thermal headroom for those rogue programs.

PowerTune is a solution that monitors and calculates the power signature of a piece of software to keep it from exceeding the maximum threshold set by the GPU vendor. 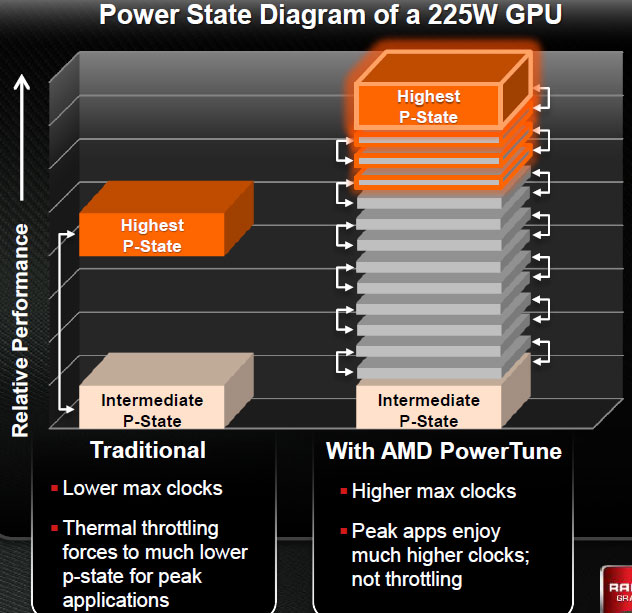 In a sense, this allowed both GPU companies to set higher default clock speeds for running games at on current generation GPUs without the worry of a user running Furmark, frying their card, and asking for a refund.  AMD’s PowerTune is a hardware-based solution that keeps things in check and adjusts the clock speeds as necessary to keep things in bounds.

The initial worry from users and the media was that this would mean variable performance on a card to card basis – but this fear never came to be.

A new technology AMD is introducing with the Radeon HD 7970 is ZeroCore Power that puts the GPU in a nearly completely powered off state when your display goes to sleep. 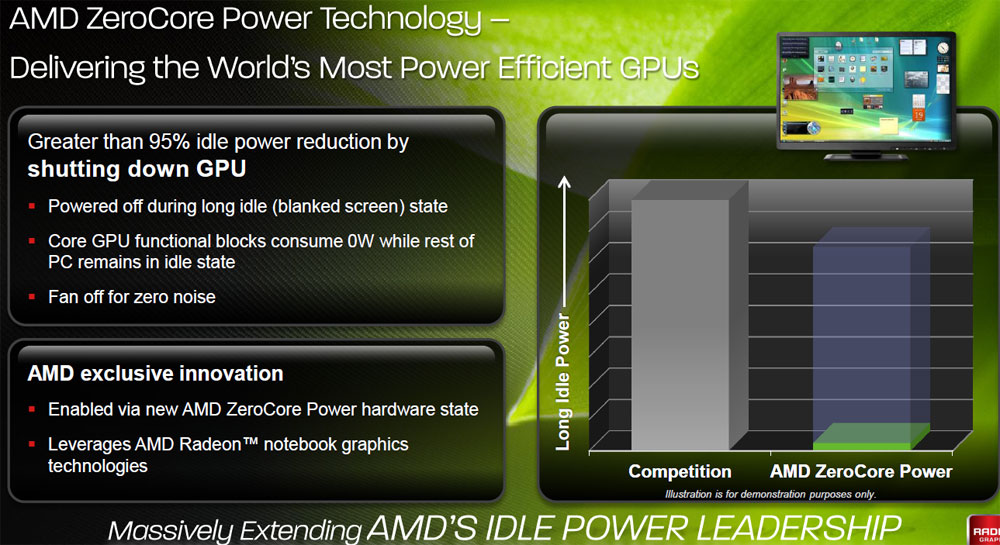 During a long idle state, which is defined as when your screen is put to sleep in the Windows power settings, the GPU will enter a new power state that borrows technology from AMD’s mobility line of graphics chips.  When in this mode the GPU actually consumes less than a watt of power while the entire 7970 card uses less than 3 watts!  The fan turns off (it doesn’t just slow down) and you have basically a silent running, yet powered on and ready for you to just move the mouse, PC.

Maybe even more interestingly, this technology allows the non-primary GPUs running in a CrossFireX configuration to completely power down when you are in Windows mode.  If you are running a set of three HD 7970s then while doing basic web browsing the second and third GPUs will be running at a sub-watt level and won’t be contributing to the noise levels of your system either.  This will even apply to multi-GPU cards when they are released later in the year.

This is the kind of innovation we want to see to push the further adoption of multi-GPU gaming rigs!

AMD’s Eyefinity was the first to bring multi-display gaming to the masses and it continues to be the leading detriment to gamer’s wallets everywhere.  With the Southern Islands architecture the team at AMD is bringing a few new changes to the ecosystem.

Even though we saw it released with the 11.12 and 12.1 driver this month, the added ability to run both Eyefinity and AMD HD3D gaming at the same time is welcome addition to the Radeon HD 7970.  Yes NVIDIA has had this option for a while with 3D Vision Surround but only the AMD offerings will be able to do it from a single graphics cards – NVIDIA still requires an SLI setup.

And, as we’ll see later in the benchmark portion of our review, with the performance the HD 7970 provides, running Eyefinity and even HD3D is a viable option for those of you with the funds.

Another really awesome update is the inclusion of discrete digital multi-point audio.  DDM Audio allows for a lot of cool functionality, one of which is the ability to output independent audio streams to each display that is connected via HDMI or DisplayPort.  As indicated in the above slide, this allows for conferencing where the audio actually comes from the display associated with that sound.  Of course, the complication here is that video conference software like ooVoo will be required to specifically target this functionality.

Side note – AMD and ooVoo tried to demonstrate this at the technology day in Austin, TX and while it was functional, it obviously needed some more tweaking.  Be sure you try a demo of any software out before shelling out the money for it. 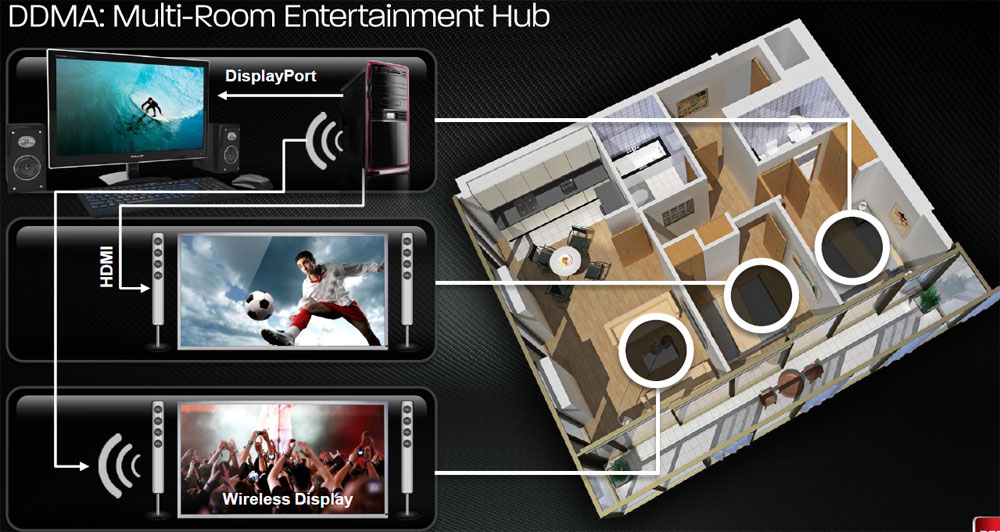 My absolute favorite capability of DDMA is that you can now have a central computer act as your entertainment hub while getting different audio streams to different parts of your house.  If you have ever wanted to share a computer with another user (one watching Netflix while you surf the web) then you already know how important this could be.

With the Radeon HD 7970 it is now possible to both play a game and (either you or another person) to watch video with support for audio, at the same time!  Who says ADHD is an outdated trait?

Another much-requested feature is the ability to set custom resolutions in the control panel as well as moving the taskbar and default desktop locations to the center monitor.  AMD is going to be addressing both of these Eyefinity quirks with the 12.2 driver release due in February!

The oft-discussed, never-released MST Hub, that allows for splitting of a DisplayPort 1.2 connection into three DP ports, will finally be available in the Summer of 2012 according to AMD.  These devices won’t be cheap though – expect to pay ~$150 each for the ability to run 6 monitors off of your standard 6000 or 7000-series graphics cards.

Finally, AMD’s HD 7970 graphics card will be the first to support the new HDMI 3 GHz standard that allows for higher resolutions across the connection that has become the video standard.  3 GHz HDMI will allow for true 60 Hz per eye on a 1080p resolution 3D configuration as well as running 4K displays off of a single input (as opposed to the two they require today).  While this is a great feature, no displays that I know of in the consumer market yet support the 3 GHz standard, but at least you will have the option with a Radeon HD 7000-series card for the future.

Another new addition to the Southern Islands GPU is support for the AMD Video Codec Engine that changes the way video encoding is done on the GPU.  At its core the VCE offers an H.264 fixed function encoder that is both power efficient and faster than real-time working on 1080p 60 Hz content.  This technology can be seen as an answer to Intel’s QuickSync technology.

There are two modes this technology can run in – full and hybrid.  The "full mode" runs completely on the fixed hardware and is the most power efficient HD encoding process on the AMD platform.

In the "hybrid mode" the VCE takes advantage of the compute power of the GPU and improves performance with the scalable pipeline that SI provides.

We didn’t have any applications that implemented this technology available quite yet but we are curious to see how the image quality of each implementation compares and how it stacks up to the QuickSync technology offered on Sandy Bridge.