From simply a GPU perspective, the GTX 570 is something we are pretty familiar with here at PC Perspective.  The move from 732 MHz to 800 MHz with the out-of-the-box overclock that comes with the GTX 570 MDT X4 from Galaxy is definitely a help for gaming performance and as we know for multi-display gaming, we can use all the horsepower we can get.  In our single display testing we saw the Galaxy card come out ahead of the reference GTX 570 by a few percentage points and ahead of the new GeForce GTX 560 Ti 448 as well.  It should go without saying but if you are looking to power a single display, this is not the card for you – you would be tossing away money that could be used for a faster card suited for a single monitor configuration.

Does this card offer enough performance to reliably push three monitors at the resolution of 5760×1080?  In my opinion it does, but you are still going to have to realize that you can’t run the same settings that you would with a 1920×1080 screen on most games.  Sure, if you want to run Civilization V you won’t have a real problem and if you can get games like Left 4 Dead 2 to recognize the hardware properly, then max it out to your heart’s content.  But games like Metro 2033, Battlefield 3 and even Dirt 3 are going to ask you to turn things down a bit if you want to see around 60 frames per second at screen resolutions like that. 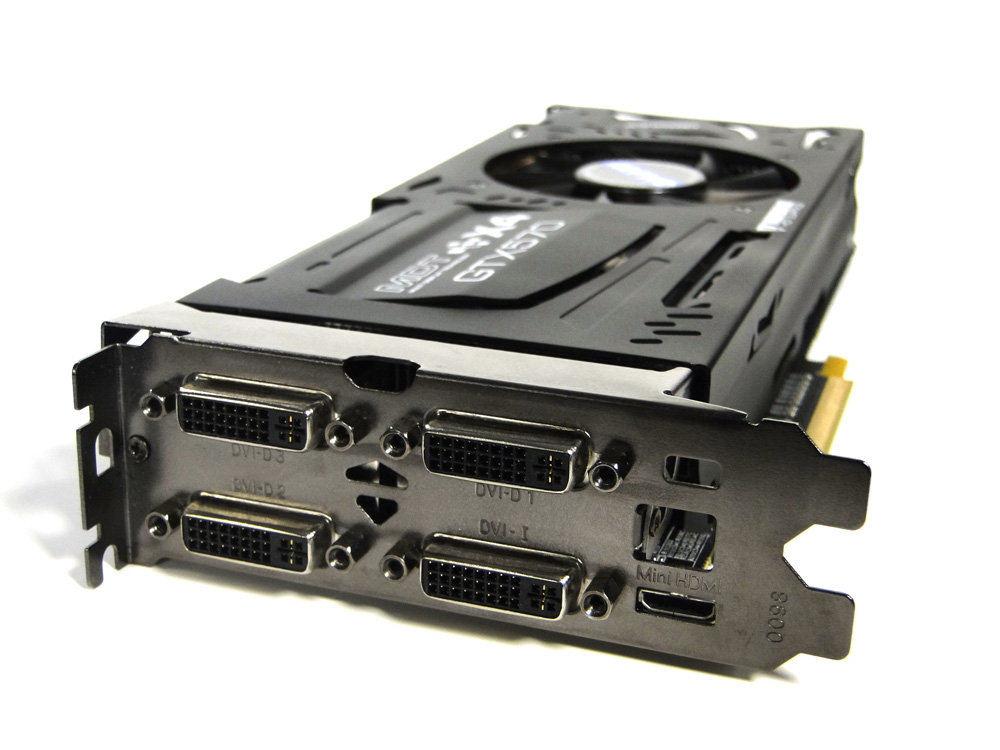 Just a thought – you could in fact add in another GTX 570 for SLI purposes if you wanted to improve your performance at 5760×1080.  With a price tag of about $339 today it might not be a bad solution for a couple months down the road…but then you could do that with a pair of ANY GTX 570 cards…

Obviously the main feature of the Galaxy GTX 570 MDT X4 is the ability to run 4 monitors off of a single NVIDIA GPU – something that can’t otherwise be done.  You can use these four displays in a productivity environment for work purposes and then turn on your favorite PC game and run at up to 5760×1080 on three of those four screens.  Prior to the MDT series, only AMD’s Radeon GPUs could properly run more than two monitors on a single-GPU card and it has been (and really continues to be) one of the key benefits that AMD enjoys on its architecture.

Galaxy and its partnership with IDT have devised a solution by basically taking the secondary display output on the GTX 570 GPU and splitting it across 3 screens.  From a technical point of view it is simply a repurposing of bandwidth and in my experience with the technology on the GTX 570 MDT X4 it worked flawlessly and was easy enough to setup and run. 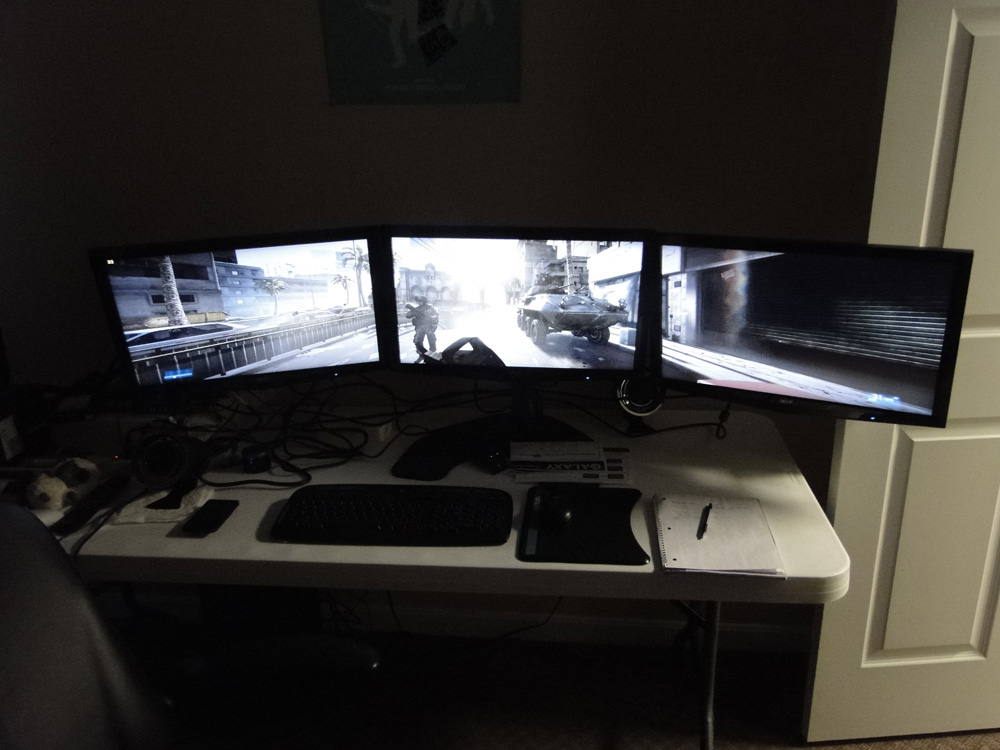 There are problems though – the most notable of which is the 50 Hz limitation on the 5760×1080 resolution that will likely be most common for gamers that want to move into the world of multi-display gaming.  For many games this will just work out of the box – Battlefield 3, Civilization V and Deus Ex are a couple examples of the best case.  In other instances you will have to jump over to sites like Widescreengamingforum.com to see what hacks you can make to the resolution in INI/XML files to get a game up and running.  For me, I had to do that on Dirt 3 but once the change was made the game worked great.  Finally, there are some games that just will not work with a 50 Hz implementation without serious modification – take Valve Source titles and Batman: Arkham City in that category.

I don’t know if there is a software fix for this that is even possible other than a patch from the game developer and even if NVIDIA could fix it themselves, would they bother with that at all with the GTX 600 series looming?

The Galaxy GeForce GTX 570 MDT X4 card is already on the market and is currently available for the price of $379.  Compared to Galaxy’s own GTX 570 model that doesn’t integrate the MDT technology, which you can grab for $339, that is a $40 premium.  For the added functionality of the MDT X4 model that price hike seems fairly reasonable and if you want to try out some multi-display action without having to upgrade to an SLI configuration, give it a look.

The hiccups of the 50 Hz limitation are definitely an issue though and warrant some concern.  If this card could do 60 Hz and run with all the same games that NVIDIA Surround and AMD Eyefinity could, the MDT would be a slam dunk.  With those concerns however I find it difficult to recommend to anyone that isn’t a knowledgeable user comfortable with editing INI files and modifying games when necessary.  The Galaxy GTX 570 MDT X4 is a competent solution for NVIDIA multi-display gaming but it can’t quite match the elegance of the Surround or Eyefinity implementations which holds it back from its full potential. 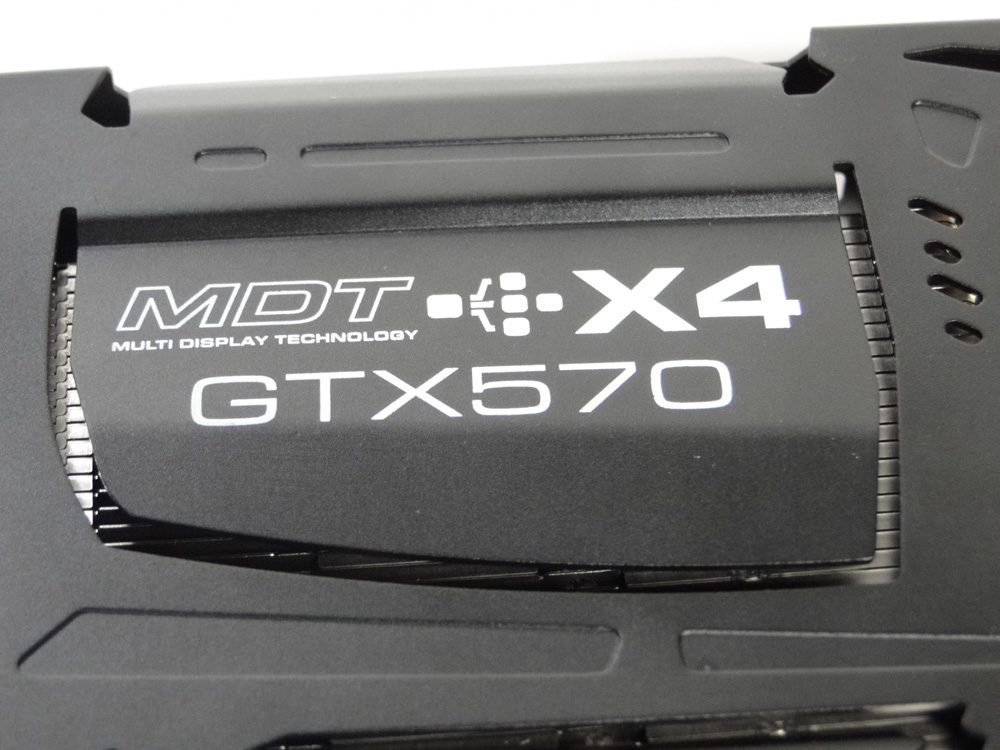 We have to commend Galaxy and its engineers for taking the initiative and addressing a problem that NVIDIA has not done – getting more than two displays working on a single GPU graphics card.  The MDT series of solutions shows that the company is not only taking gaming seriously but that they are addressing the high-end of the market with a nod towards enthusiasts.  That is something we will always support here at PC Perspective.  Specifically, the GTX 570 MDT X4 card offers up a solid amount of performance for 5760×1080 or similar resolutions all while staying under the $400 budget – no other NVIDIA graphics cards can offer that.  The NVIDIA GTX 590 (if you can find it) will cost nearly twice that and even EVGA’s GTX 560 Ti 2Win is more than $500 and offers less usable frame buffer for high resolutions.