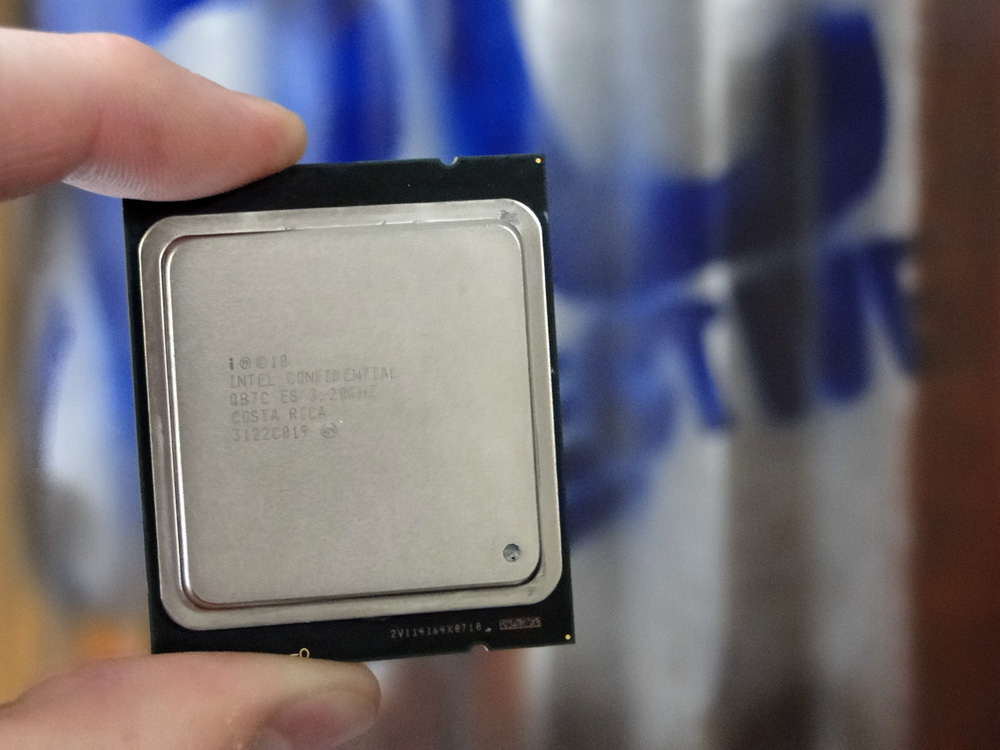 The Core i7-3960X is the fastest CPU available but does the much less expensive Core i7-3930K offer the same performance and platform benefits?

In the conclusion to my original story looking at the performance characteristics of the Sandy Bridge-E platform, I wrote this:

I am most interested in the Core i7-3930K (as I think most of you will be), but we are going to have to wait a bit to see if we can get performance and power results for that part.

Well good readers, I am here with that information!  After getting my hands on the Core i7-3930K processor that makes up the other 50% of the available options for the X79 chipset motherboards, I can definitively say that THIS is the processor you want.  Unless you are crazy-go-nuts rich.

With a clock speed only about 2.5% lower than its bigger brother yet a price that is 44% lower, the LGA2011 socket definitely has its enthusiast favorite.

I am not going to bother reprinting everything that we discussed about the new Sandy Bridge-E processor architecture, the X79 chipset and platform changes here though if you haven’t read about them before today, you should definitely take a look at my earlier article.

Here is a quicker summary:

The answer might surprise you, but truthfully not a whole lot has changed.  In fact, from a purely architectural stand point (when looking at the x86 processor cores), Sandy Bridge-E looks essentially identical to the cores found in currently available Sandy Bridge CPUs.  You will see the same benefits of the additional AVX instruction set in applications that take advantage of it, a shared L3 cache that exists between all of the cores for data coherency and the ring bus introduced with Sandy Bridge is still there to move data between the cores, cache and uncore sections of the die. 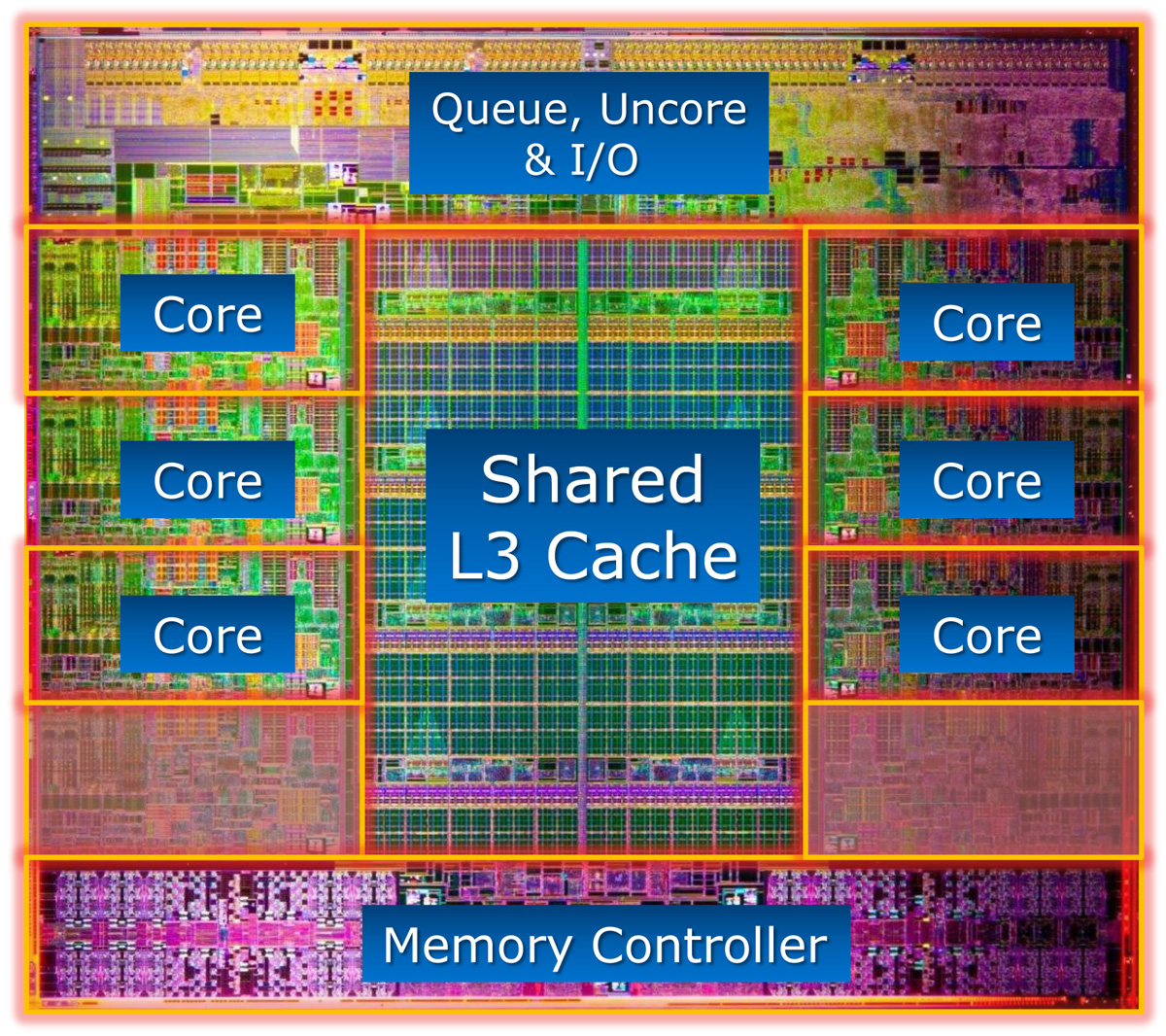 Turbo Boost technology makes a return here as well with the updated 2.0 version in full effect – there are more steppings in scalability on this part than on the Nehalem or Westmere CPUs.

With that said, there are some important changes to take note of, starting with the absence of any and all Sandy Bridge aspects related to graphics and multimedia processing.  The Sandy Bridge-E Core i7-39xx and i7-38xx parts will not have processor graphics of any kind on them, and while this isn’t a big deal for the targeted users of high-end hardware like this, there is one drawback.  Along with the GPU portion, the QuickSync technology is also absent from the design as it was dependent on the Intel HD Graphics technology for some of its processing.  If you were a fan, as we were, of the QuickSync media transcoding applications that worked impressively fast, then you should be prepared to live without it again if you buy a SNB-E processor.  Still, with 6-cores and 12-threads of processing, the Core i7-3960X should be able to handle media transcoding fairly well as we demonstrate in our benchmark testing.

A significant portion of the processor die is relegated to communication with the 40 lanes of PCI Express supported by Sandy Bridge-E.  This is a VAST improvement over the current Sandy Bridge parts that only support 16 lanes.  While PCI Express 3.0 support is not yet official on the SNB-E CPUs, all of the motherboard vendors we have talked to are comfortable with saying the combination of the new CPUs and X79 motherboards will run that communication protocol properly when supported cards are released in 2012.  For whatever reason, Intel has decided to not validate the PCIe 3.0 capability of the processor directly and instead claims that it "believes that some PCIe devices may be able to achieve the 8GT/s PCIe transfer rate on X79".  So…uh, there.

The new Sandy Bridge-E processors are larger than previous Nehalem or Sandy Bridge CPUs as inferred from the requirement of the new LGA2011 socket.  The CPU die itself is built on the same 32nm process technology as the current generation Sandy Bridge and consists of 2.27 billion transistors in the form of a nearly square 434.72 mm2 die.

Originally we only had the highest end unit available for our testing but thanks to some friends we were able to get a Core i7-3930K sent over for some testing.  This does indeed lower the price pretty dramatically without lowering the performance specifications of the processor much at all. 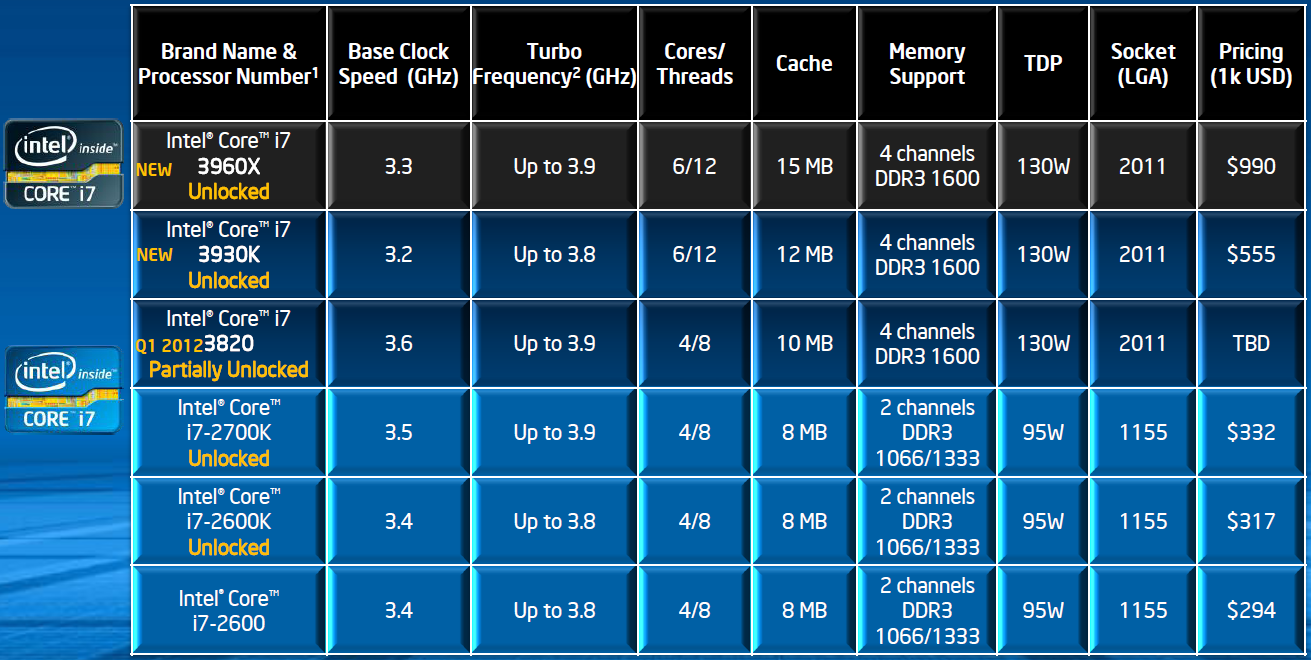 The Core i7-3960X that we reviewed initially is set at a substantial price tag of $990 though it includes the highest base clock speed, the highest Turbo frequency and even the most L3 cache.  As the next step down, the Core i7-3930K comes in with an estimated price of $555 and clock speeds only 100 MHz lower than the Extreme Edition CPU while continuing to offer a fully unlocked chip for overclocking goodness.  There are still six processing cores, twelve available threads and 12MB of L3 cache to satisfy pretty much any computing need.

Let’s take a quick look at our system specs and which comparisons we need to watch for in our testing!