Source: Bright Side Of News 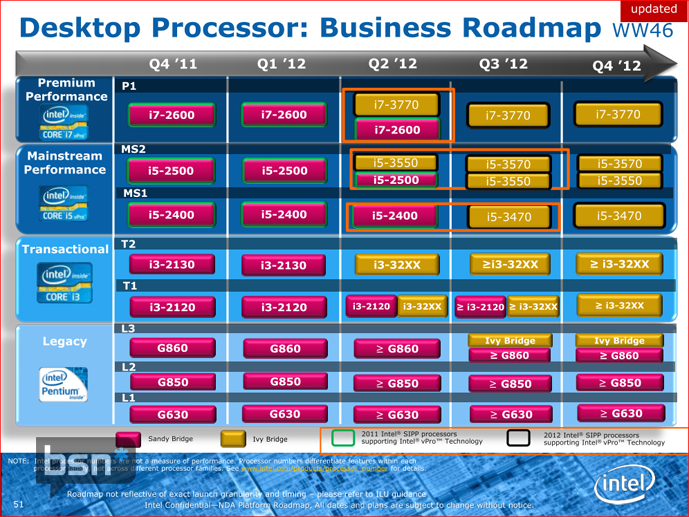 Although Intel’s latest Sandy Bridge successor, Ivy Bridge, was slated for a January 2012 launch, the situation is now looking more bleak. According to these slides over at BSN, Intel is delaying Ivy Bridge until at least April. While the top end Core i7 3770 Ivy Bridge processor might be available as soon as Q2 2012, it is also the most expensive part, and usually not the one that the majority of enthusiasts are waiting for. Rather, the important processors to watch for are the mid range and overclocker-friendly Core i5 series which will be available in Q3 2012 at the earliest if the current road-map holds true. The i5 3550 part may come out in Q2 2012 along with the top end i7 CPU; however, the majority of i5 processors will be released as soon as Q3 2012.

Further, the budget Core i3 Ivy Bridge parts are in the same boat as the i5 processors, with at least one (possibly) becoming available along with the top end Core i7 part in Q2 2012 and the rest slowly trickling out over the remainder of the year. While it is generally the case that the top end processor(s) are released first, followed by the lower end and less expensive parts, the delay has pushed back a April release for some of the budget parts to a Summer release. Needless to say, it is less than ideal for those consumers eagerly waiting for certain chips to go on sale. Not to mention that for those adventurous few that were willing to pay top dollar for the top end i7 chip this January now have to wait even longer.

The delay is likely due to Intel wanting to get as much money as possible out of the Sandy Bridge platform, and the lackluster launch of AMD’s Bulldozer products. Intel is likely taking the extra time to refine the new chipsets and the PCIe 3.0 support (that is also not technically rated for PCIe 3.0 speeds, sort of (heh)). On the other hand, Bright Side Of News speculates that the delay may be in part due to various retirements throughout the company requiring more development time in addition to needing more time to flesh out the graphics drivers for the GPU portion of Ivy Bridge processors.

Were you hoping for an Ivy Bridge upgrade early next year? Because of the further delays, will you spring for a top end Sandy Bridge system or wait it out for Ivy Bridge despite the money burning a hole in your pocket? As someone that is still rocking a 1156 system, I was hoping to skip Sandy Bridge and go for Ivy Bridge (I seem to love near-end-to-life sockets); however, with the delays I’m not sure what I’ll be doing now.