After the successful launch of the Radeon HD 7970, AMD is back with a new, slightly cheaper card that still can best NVIDIA GeForce GTX 580.

It has been just over a month since we first got our hands on the AMD Southern Islands architecture in the form of the Radeon HD 7970 3GB graphics card.  It was then a couple of long weeks as we waited for the consumer to get the chance to buy that same hardware though we had to admit that the $550+ price tags were scaring many away. Originally we were going to have both the Radeon HD 7970 and the Radeon HD 7950 in our hands before January 9th, but that didn’t pan out and instead the little brother was held in waiting a bit longer.

Today we are reviewing that sibling, the Radeon HD 7950 3GB GPU that offers basically the same technology and feature set with a slightly diminished core and a matching, slightly diminished price.  In truth I don’t think that the estimated MSRP of $449 is going to really capture that many more hearts than the $549 price of the HD 7970 did, but AMD is hoping that they can ride their performance advantage to as many profits as they can while they wait for NVIDIA to properly react.

Check out our video review right here and then continue on to our complete benchmarking analysis!!

Southern Islands Gets Scaled Back a Bit

As I said above, the Radeon HD 7950 3GB is pretty similar to the HD 7970.  It is based on the same 28nm, DirectX 11.1, PCI Express 3.0, 4.31 billion transistor GPU and includes the same massive 3GB frame buffer as its older brother.  The Tahiti GPU is the first of its kind of all of those facets but it has a few of the computational portions disabled.

If you haven’t read up on the Southern Islands architecture, or Tahiti GPU based around it, you are missing quite a bit of important information on the current lineup of parts from AMD.  I would very much encourage you to head over to our Radeon HD 7970 3GB Tahiti review and look over the first three pages as it provides a detailed breakdown of the new features and the pretty dramatic shift in design that Southern Islands introduced to the AMD GPU team. 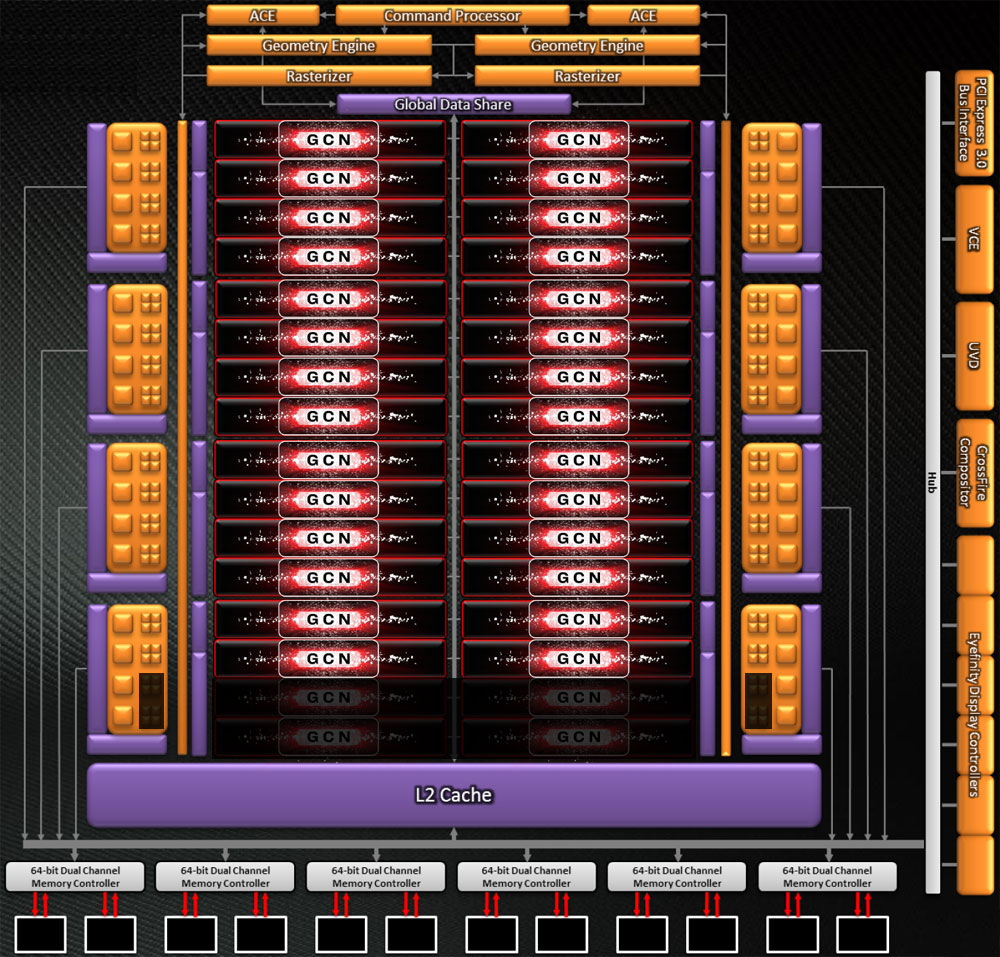 The block diagram here gives you an idea of how little actually changes on the HD 7950 – there are four fewer CUs (compute units) bringing the total stream processor count from 2,048 to 1,792.  This does lower the theoretical maximum compute performance from 3.79 TFLOPS down to 2.87 TFLOPS but that is still a very impressive number for a discrete GPU.  The only other hardware change that I can see is the drop from 128 to 112 texture units that puts the HD 7950 to a texture fill rate of just under 90 GT/s. 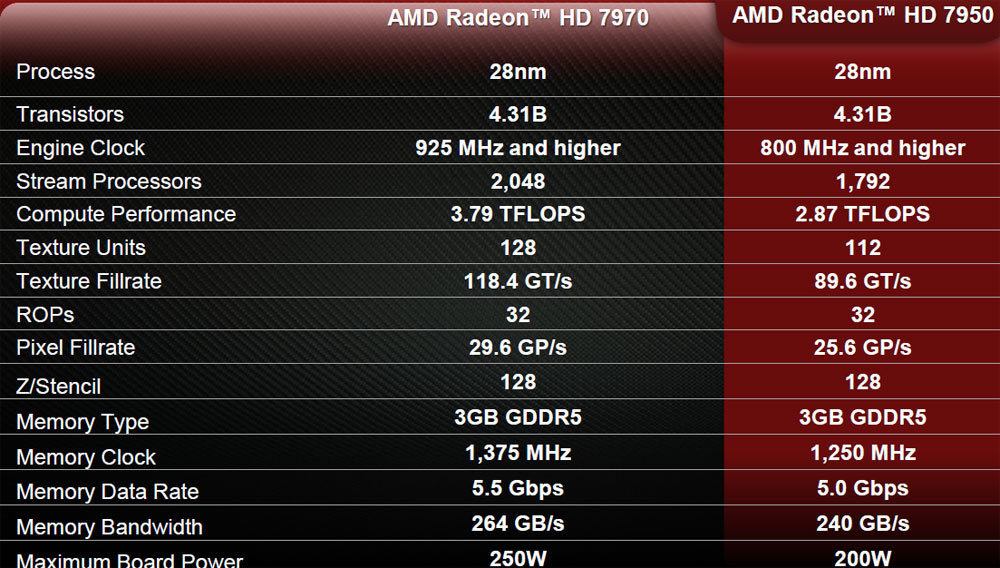 AMD provided a table that shows the direct head to head comparison between the HD 7950 and the HD 7970 including clock speeds.  With a drop from 925 MHz to 800 MHz along with the 256 fewer stream processors there is definitely going to be a performance hit for the reference designs.  AMD did keep the 3GB frame buffer, 384-bit memory bus and 32 ROP units of the HD 7970 on this new card and this should make sure that the HD 7950 isn’t taking a noticeable perf hit when it comes to Eyefinity.

One of the interesting parts about the Radeon HD 7950 is that it will not be released in a pure reference form as we are used to seeing from initial high-end GPU releases.  Instead, AMD gave its partners the directive to build their own PCBs, design and purchase their own coolers and sell more unique SKUs on day of release.  After talking with quite a few of these partners we found that while they all were setup for 800 MHz models, almost everyone was going to release a part running at 900 MHz or above.  The graph here shows what AMD thinks AICs will do with its Tahiti GPU, scaling to as high as 1000 MHz, a 25% increase of the reference speed, out the gate.

In my own overclocking testing we actually were able to run the HD 7950 at 1050 MHz without any voltage changes or even adjusting the PowerTune settings.