Can a great tablet be made better?

The original ASUS Eee Pad Transformer was a bit of an upset in the tablet market. Before its launch, there was no particular reason to believe that ASUS would be able to provide a better product than any of the many other PC manufacturers entering the Android tablet fray. Sure, I like most of the ASUS products that I’ve been able to review, and I believe they have some good engineers. But they also had no experience beyond a few Windows tablets and convertible tablets.

Yet they were successful. At the time I called the Transformer "the best Android tablet on the market today” and gave it with a Gold Award. Consumers apparently agreed, as it flew off shelves with such speed that ASUS has decided to debut a follow-up only half a year after the original hit the market.

There’s a lot going on with this new product. Outside, it’s entirely re-designed to provide a more luxurious, thinner, lighter experience – and there’s even a new display. Inside, a new Nvidia Tegra 3 processor lurks, ready to pounce on apps with four (er…five) cores. Almost everything has changed. Such quick action by ASUS is bold, but also brings risk. Is the Prime as good now as the original was a few months ago? Let’s start by looking at the specifications. 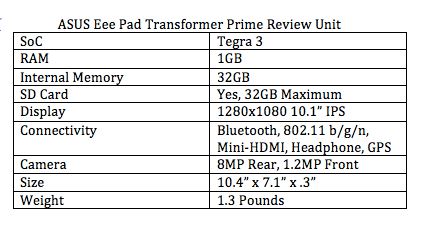 If you check out our original Transformer review and compare its specifications to this new device, you’ll see that nearly every point has been improved or enhanced. More cores are included as part of the processor, the battery is bigger, and the display is (supposedly) better.

Let’s start by looking at what isn’t covered in the specifications, however – the cool new exterior design. Unfortunately we weren’t provided with the dock for review, so we’ll simply have to focus on the tablet. 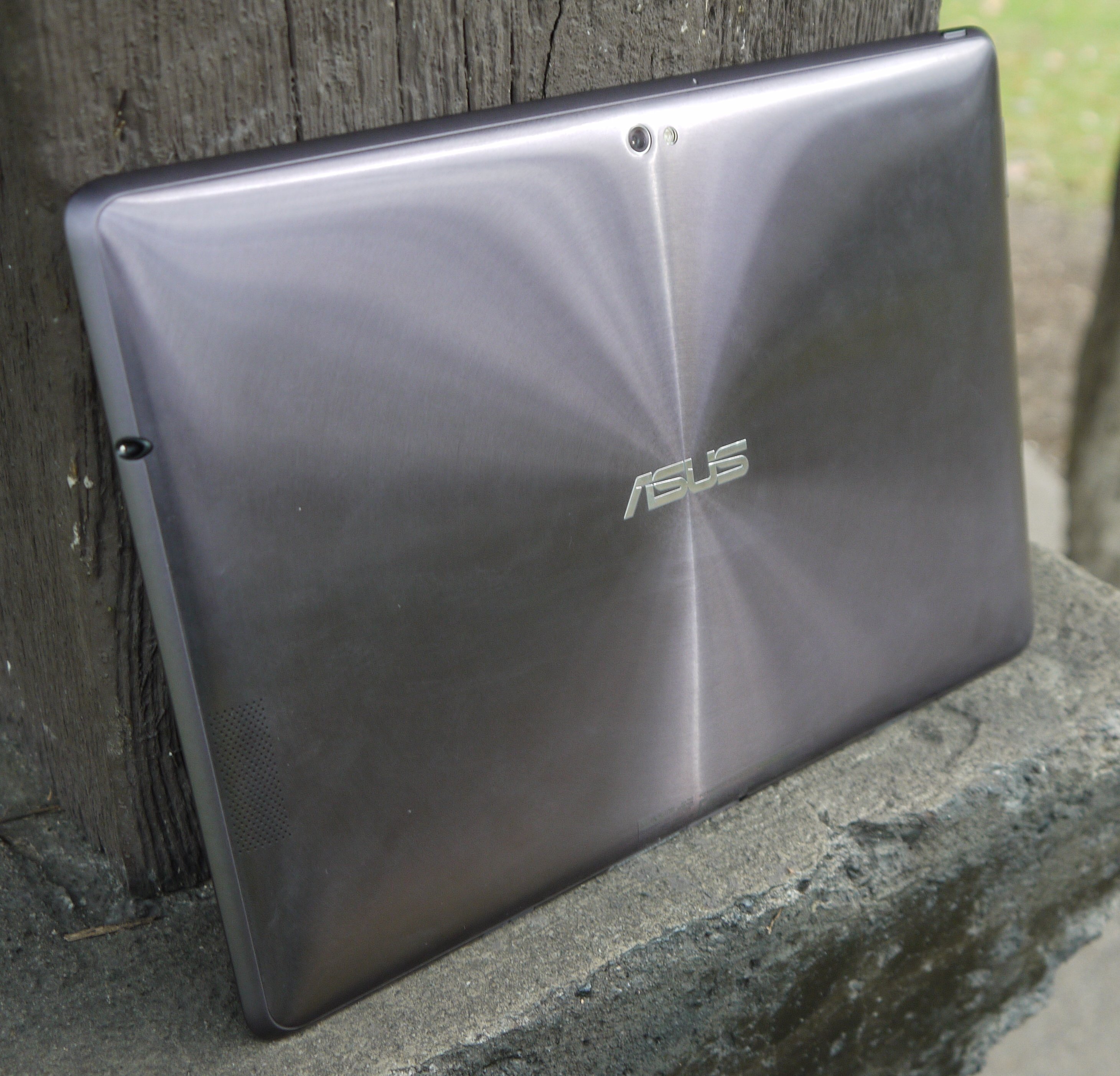 The original Transformer was a handsome tablet, and arguably the best looking Android product besides the Samsung Galaxy Tab 10.1. Yet it was also a bit chunky, at least compared to the iPad 2 and just-mentioned Galaxy Tab. With the Prime, ASUS wants to be in competition with the very best the tablet world has to offer. To do that, they’ve reduced thickness to just .3 inches, putting it on par with the high-end tablet competition.

Such a dramatic change in size is noticeable the instant you picked up the device. It feels sleeker and more refined than both the original and most other tablets on the market. This is helped along by a new “metallic swirl design” on the rear panel, available in either Amethyst Gray or Champagne Gold. By making the rear panel from metal instead of plastic, the luxury of the entire experience is enhanced. After all, your fingers will be touching the rear panel 99% of the time you use this device.

Despite its thin profile, the Prime is able to offer a nice selection of buttons and ports in convenient locations. Both the volume rocker and the power button are located on opposite sides of one corner, which ensures they’re out of the way of your hands when holding the tablet in either portrait or landscape orientation. A micro SDcard slot is included for expandable memory and both mini-HDMI and headphone jacks enhance entertainment. USB is not included without the optional dock, but most competitors don’t offer it, either. 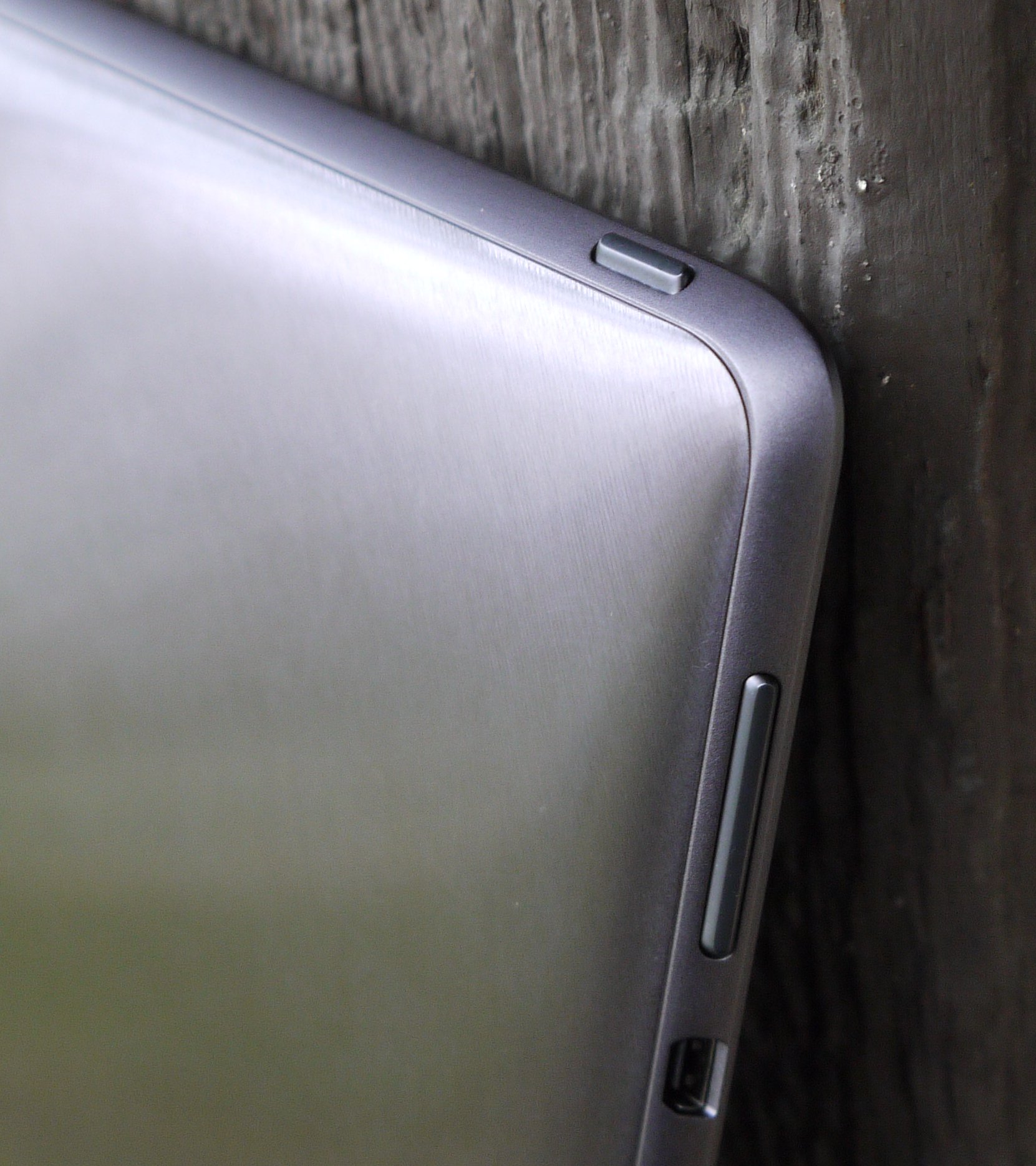 Besides dropping in size, the Prime has also dropped in weight. It’s now just 1.3 pounds, down from the 1.5 pounds of the original. That may not sound like much, but tablets are often held during use, so every ounce counts.

Using the Prime for over a half-hour wasn’t difficult, though longer periods of time could be tiring if you have nothing to rest the Prime on. Smaller tablets like the Kindle Fire have a definite advantage in this area, and there’s not much ASUS can do to erase it. Bigger tablets are simply heavier.