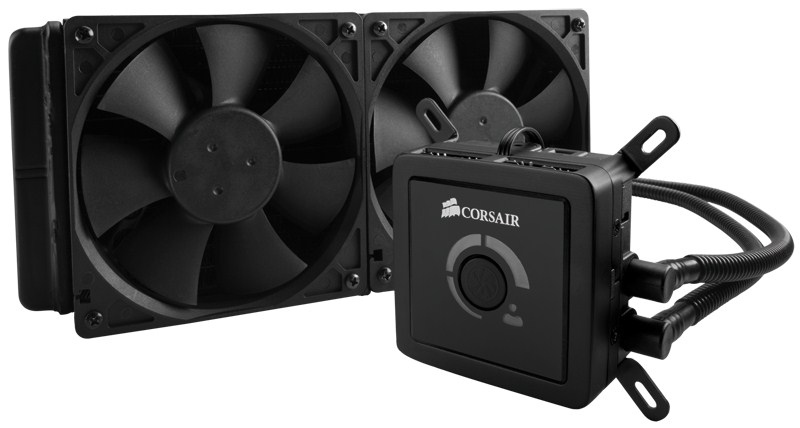 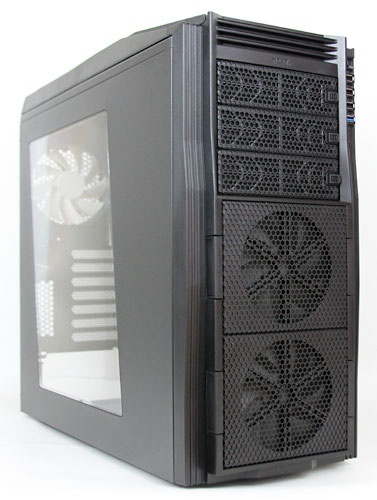 Installing the Corsair H100 is pretty straight forward, but I am going to show some of our novice PC builders how it’s done on one of my mid-range LGA 1156 gaming systems I built in 2011. One of the most important questions to ask yourself when you are deciding to upgrade to the H100 is if your current PC case can support a dual radiator configuration. My current rig wasn’t up to the challenge, so I swapped it out for an NZXT Tempest 410 Elite that I reviewed in August 2011. This case can support a dual radiator on the top panel of the case, which should compliement the H100 perfectly. 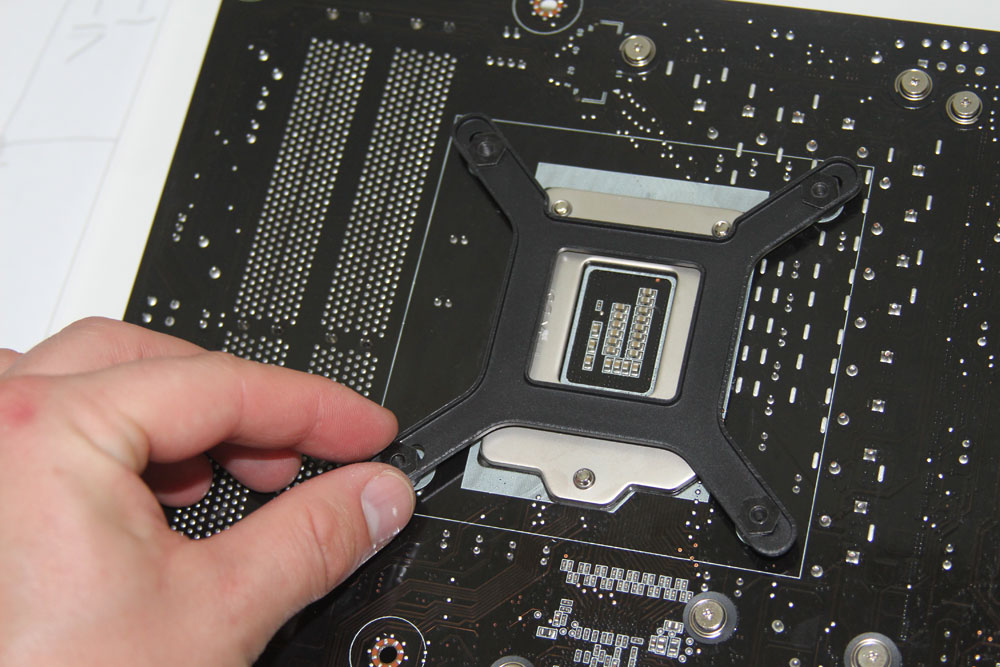 We are installing the H100 on an Intel i7 860 processor and ECS P55H-AK motherboard. The first step to install this CPU cooler is attaching the bracket to the back of the motherboard. The bracket has adjustable mounting holes that users will need to align with their board’s socket type. 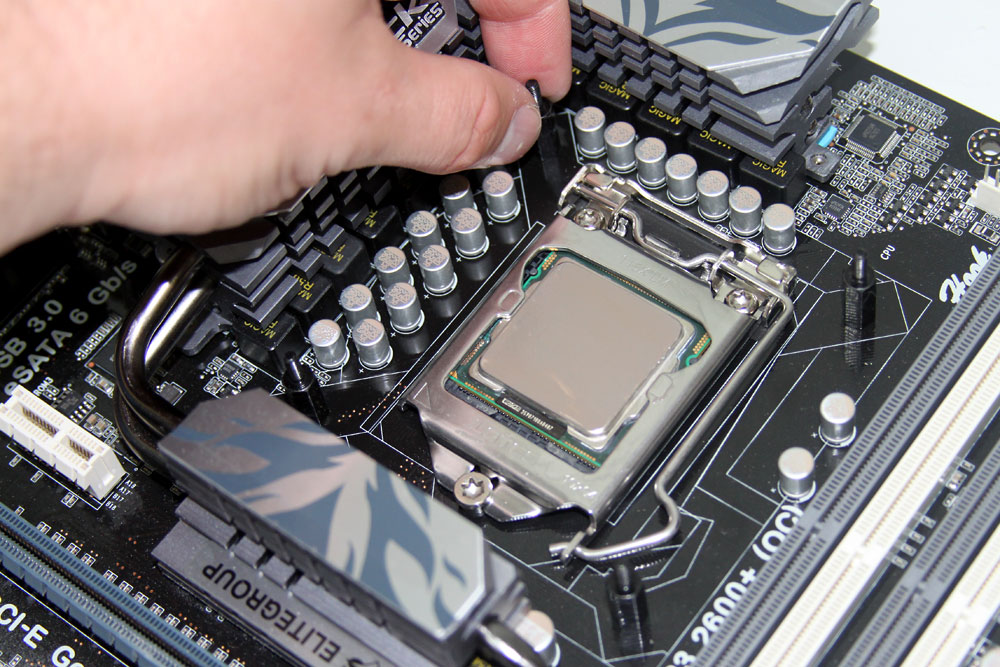 The next step is to apply a thin layer of thermal paste on the CPU and screw in four mounting screws to attach the H100’s integrated waterblock/pump over the CPU. 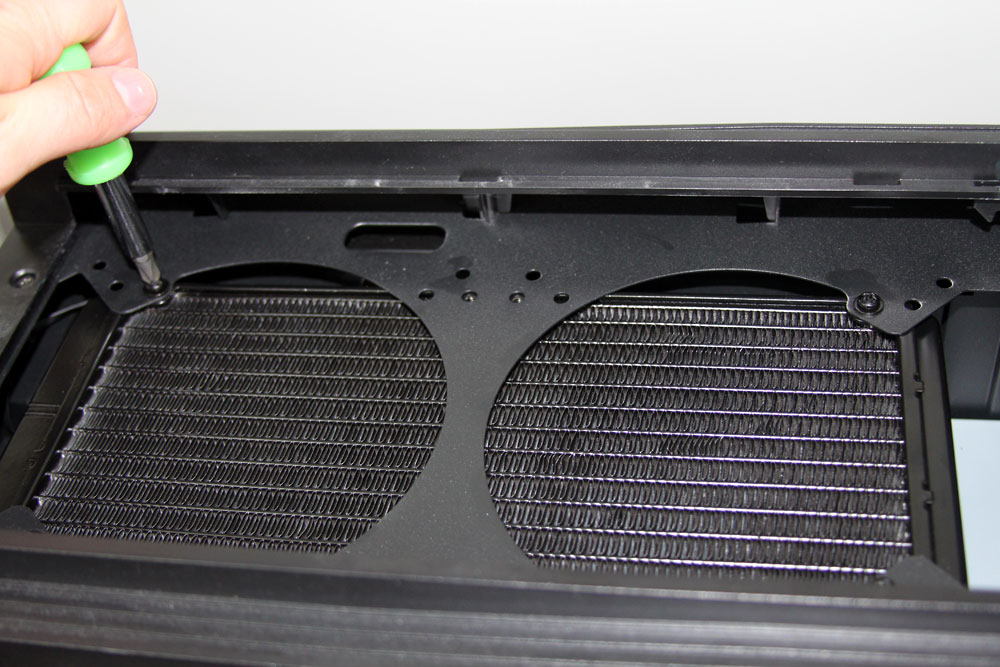 Next, secure the H100’s dual radiator to the top panel of the case using eight screws. You’ll notice there are additional mounting holes for attaching two more fans to create a push-pull fan configuration, which has been shown to be an effective way to increase performance on these self-contained watercooling systems. 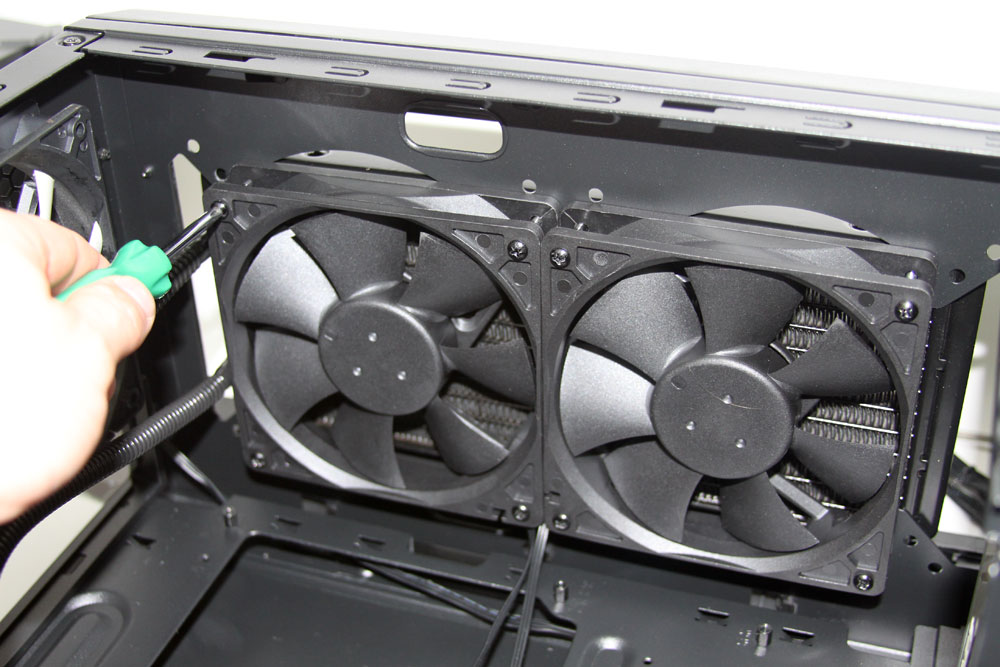 I screwed in two 120mm fans to the bottom of the radiator to help cool it down during operation. 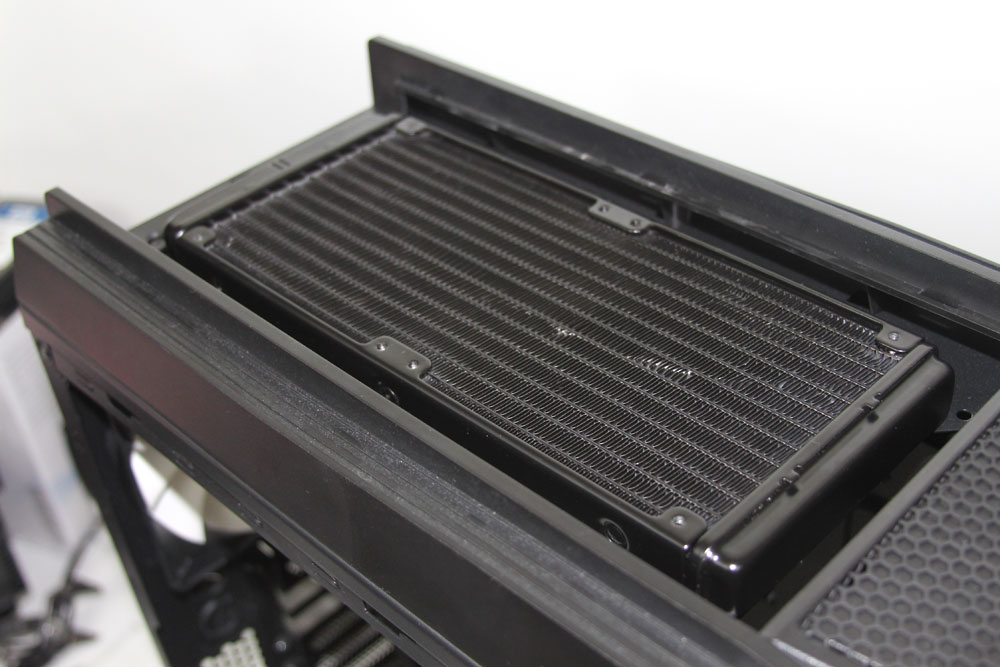 Here is a quick shot of the top of the radiator before I attached the top panel to the Tempest 410 Elite case. 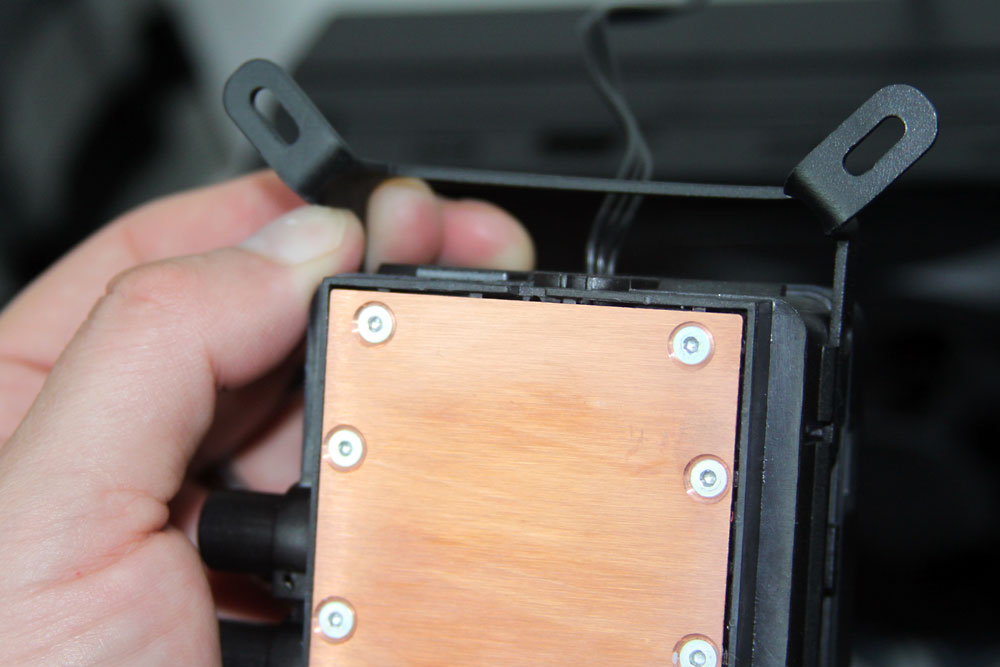 I grabbed the multi-platform mounting kit and attached the brackets to the integrated waterblock/pump using four screws. 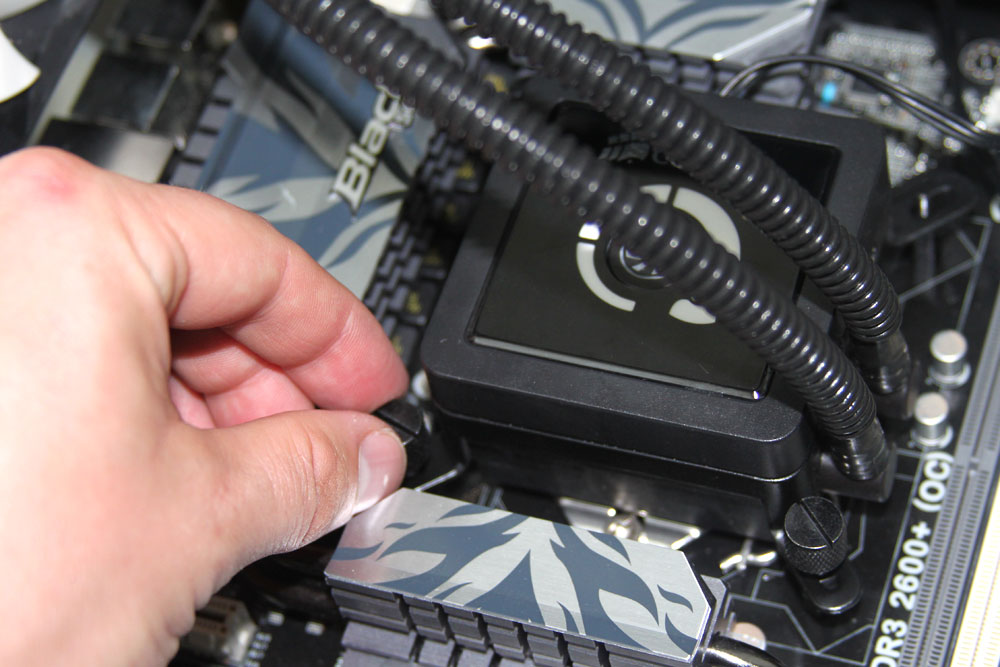 After I secured the brackets, I placed the waterblock/pump over the CPU and began tightening down four studs in a criss-cross pattern to get consistent contact with the top of the processor. This part is very important to ensure max performance from any air-cooled heatsink or liquid CPU cooler. 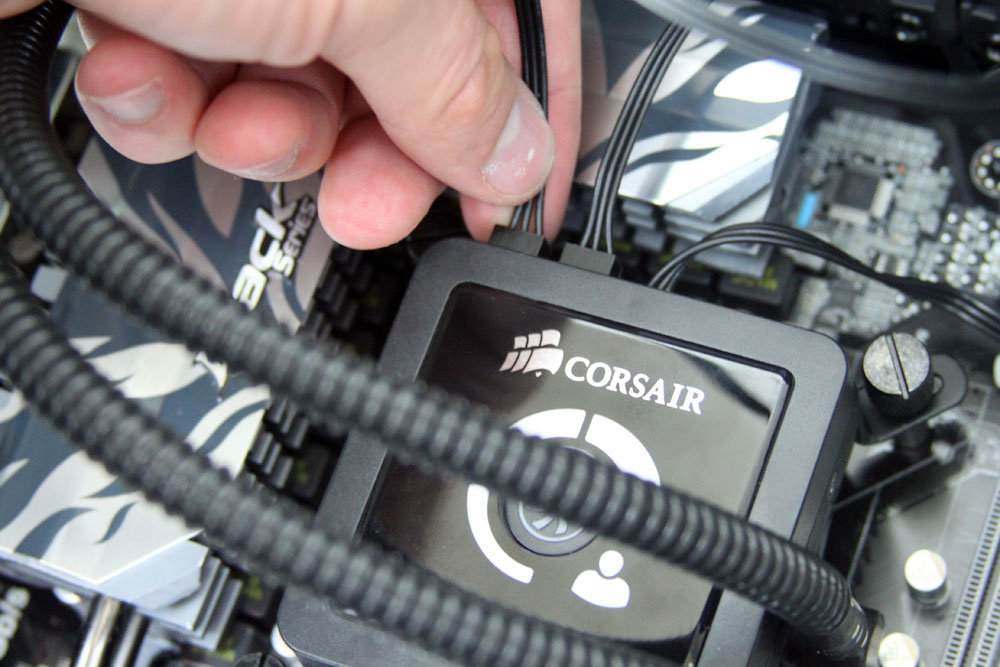 The last thing to do is attach the two 120mm fans to the fan controller located on the integrated waterblock/pump. Don’t forget to attached the three-pin fan connector to the motherboard and you’ll be all set. 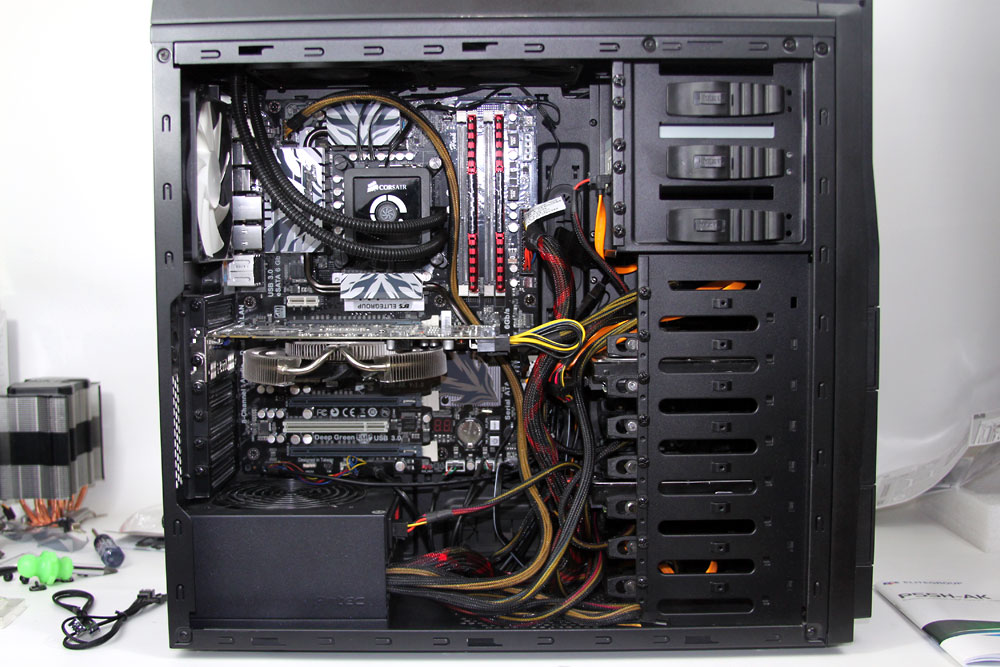 After about 25 minutes, we were able to install the H100 in our LGA 1156 gaming system. As you can see, the Tempest 410 Elite was a fantastic choice for this build because of the ability to mount the radiator to the top panel of the case. We didn’t run into any significant issues installing the H100 so let’s take a look at the performance results we received during H100 testing.

To evaluate the H100, I measured the CPU temperatures for each core under idle and load conditions using Core Temp. For idle testing, I booted into Windows and let the system "idle" for about 15 minutes and then recorded the CPU temperatures. For load testing, I ran Cinebench 11.5’s multi-threaded test that uses 100 percent of the CPU’s resources and all eight core threads. After recording both idle and load testing results, I ran identical tests with the Corsair’s H50 and H70 as well as Coolit System’s Vantage A.L.C. and ECO A.L.C. self-contained watercooling units. I didn’t have another dual radiator watercooler to test "apples to apples" against the H100, but this should give our readers a good overview at how the H100 stacks up against other consumer-level and performance CPU coolers from Corsair and Coolit Systems. 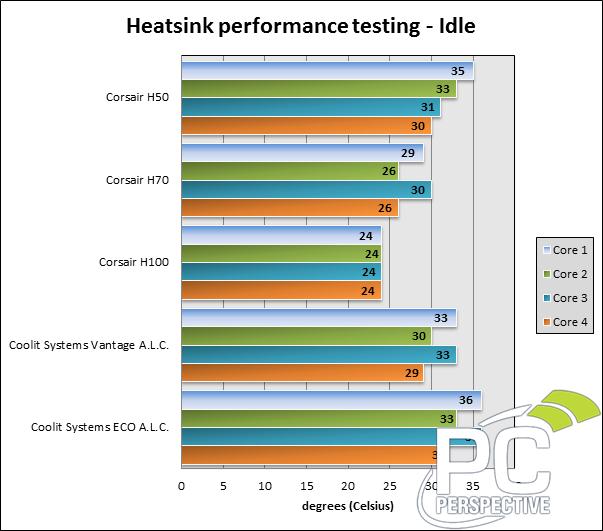 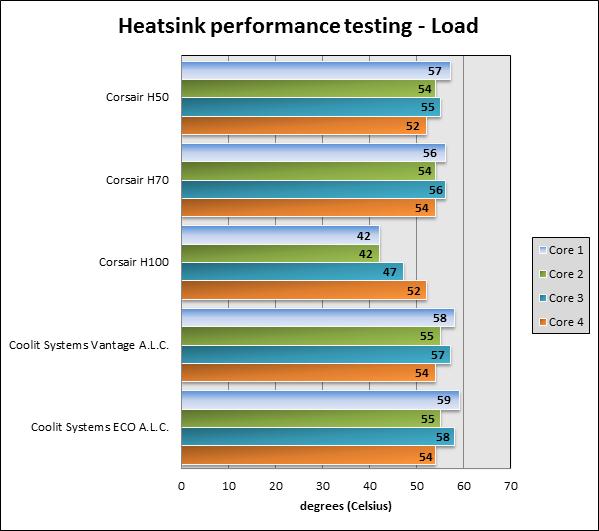 To say the H100 was impressive during performance testing would be a gross understatement. As you can see from the charts above, the H100 was 2-3 degrees cooler than the H70 during idle testing and about 7-9 degrees lower in load testing. The H70 was configured with a push-pull fan configuration, but even that setup couldn’t top the H100 that was using only two fans to cool the coolant running through the dual radiator. 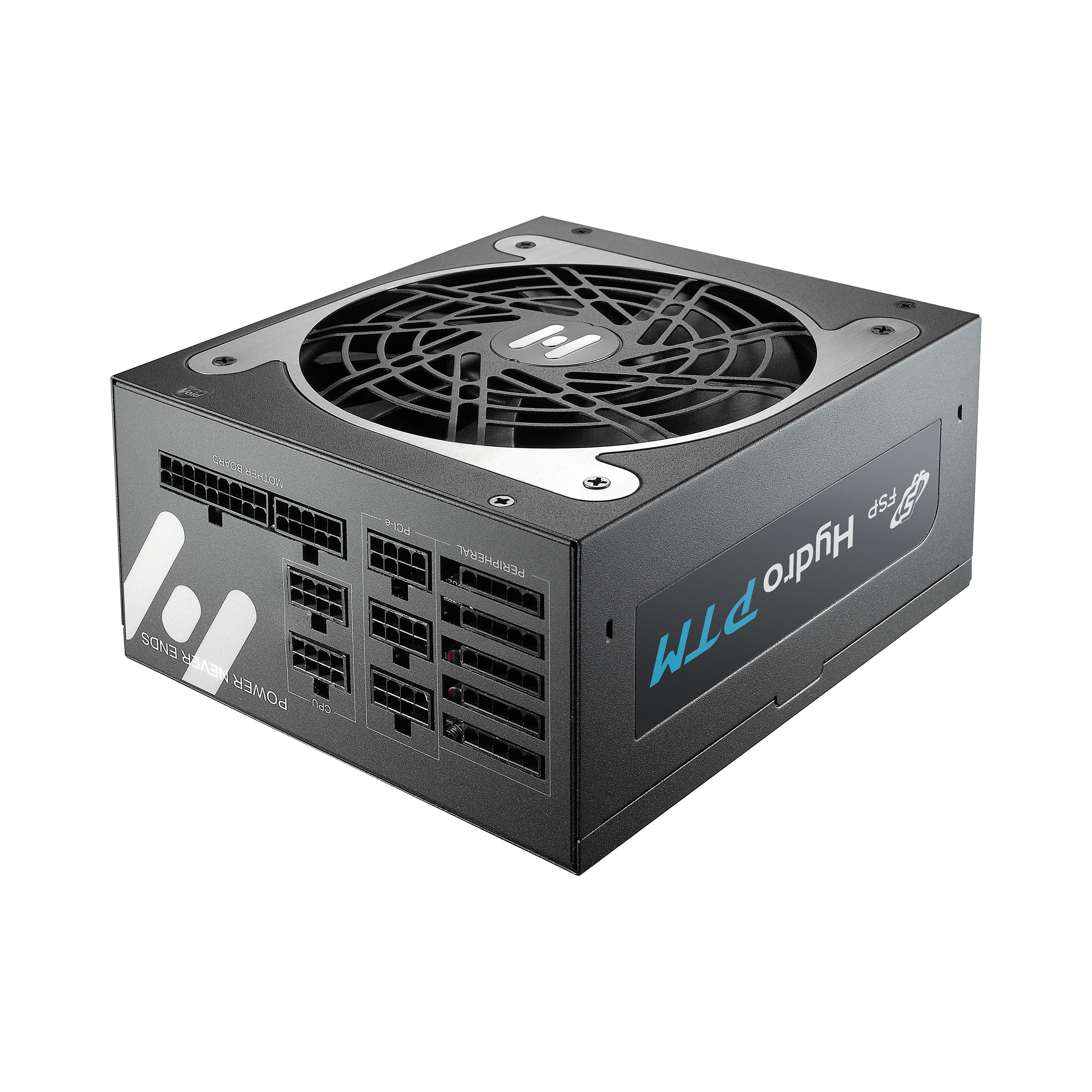 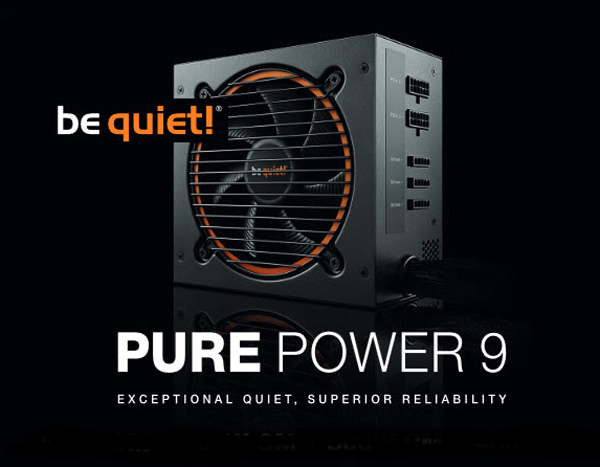