We now have our complete lineup of Sandy Bridge-E processors reviewed starting with the Core i7-3960X Extreme Edition, followed by the Core i7-3930K and now the Core i3-3820 part that will sell for about a quarter of the price of the top SKU.  I think that this new 3820 will be by far the most popular part but let’s see if that is the correct course for the market to take.

When you look at CPU performance, you still have to divide things up into "lightly threaded" and "heavily threaded" applications.  You can think of the "light" class of applications to be things like LAME MP3 encoder or even iTunes while the "heavy" class consists of applications like Handbrake and rendering tools such as POV-Ray or CineBench.  For lightly thread programs, the Core i7-3820 is going to be just as fast as the much more expensive Core i7-3960X and Core i7-3930K thanks to the generous base clock and Turbo Boost speeds that the CPU offers right out of the box.  Take a look at our LAME MP3 test or our somewhat older Windows Media Encoder test; in both cases the Core i7-3820 was right there it the most expensive processors on the planet.

There are still cases, mostly centered on content creation and transcoding, where more cores are really taken advantage of, and in those areas the Core i7-3820 falls behind as expected since it has 50% fewer cores than the 3960X and 3930K parts.  Still, this $285 CPU is able to put up quite a fight and beats out the performance offered by Intel’s other line of CPUs, the LGA1155 Sandy Bridge parts like the Core i7-2600K.  What was previously the fastest current-generation CPU from Intel still sells for over $300 online making it more expensive individually but still potentially cheaper when paired with the appropriate motherboard.

For those of you worried about overclocking, I think our testing shows that the i7-3820 can hold its own and hitting 4.63 GHz is more than enough for the majority of consumers.  Also, that speed comes pretty easily thanks to the changes that Intel made with Sandy Bridge-E so the "partially locked" status of the CPU should only be a factor for those that are REALLY serious about the art of the overclock.

Taking cost out of the equation, there area couple things to consider when looking at buying the Core i7-3820 versus something like the Core i7-2600K.  First, the SNB-E parts do NOT include support for QuickSync technology so software that can utilize it on LGA1155 parts are simply going to be using the CPU cores rather than the fixed function, and faster, implementation.  Also, there is no integrated graphics on SNB-E, though this isn’t likely to be an issue for consumers that looking to spend $300 on a CPU for their own build.  Chances are good you will be much more interested in a discrete graphics cards from AMD or NVIDIA.

Users that want more features in their system though will likely find the SNB-E more rewarding with support for 40 lanes of PCI Express as opposed to the 16 lanes found on the standard SNB processors.  Also, with four memory channels, and many motherboards sporting 8 total DIMM slots, the X79-based motherboards will able to support as much as 32GB or 64GB very easily.  Also keep in mind that the PCIe slots on the SNB-E motherboards are almost all going to support PCIe 3.0 speeds, so if that is a concern for you, take note. 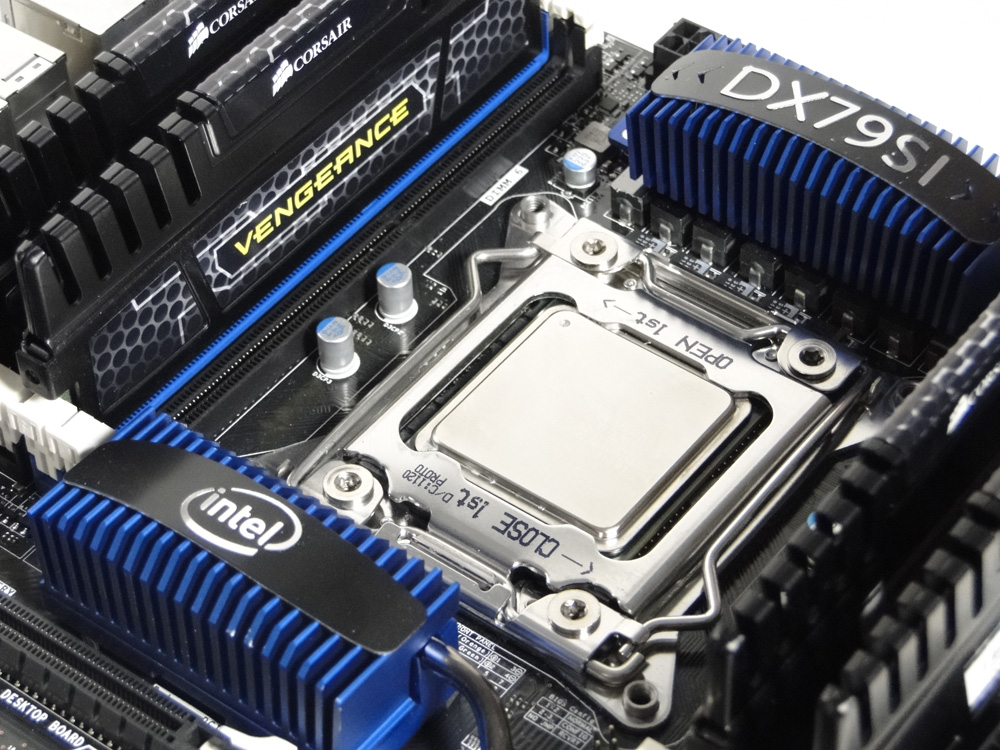 The X79 chipset didn’t integrate USB 3.0 and doesn’t change the storage configuration directly though most board vendors are adding plenty more features to these boards as a way to add value (and price realistically) to the SNB-E.

We have already shown this once before, but it bears repeating:

With the cost of the Core i7-3820 actually coming UNDER the price of the Core i7-2600K and the Core i7-2700K, you might be thinking it’s the best deal in processing today.  And while that may be the case, it doesn’t tell the entire story.  Let’s look at this way:

Now this is rather simplistic, but I just wanted to give you an overall view of what it would take to get started with a system of each platform.  The LOWEST priced X79 motherboard available today is about $225 and you will need two more DIMMs to get the most performance out of the system.  Also, because SNB-E CPUs don’t come with any cooler at all, the LGA1155 parts get another advantage there. 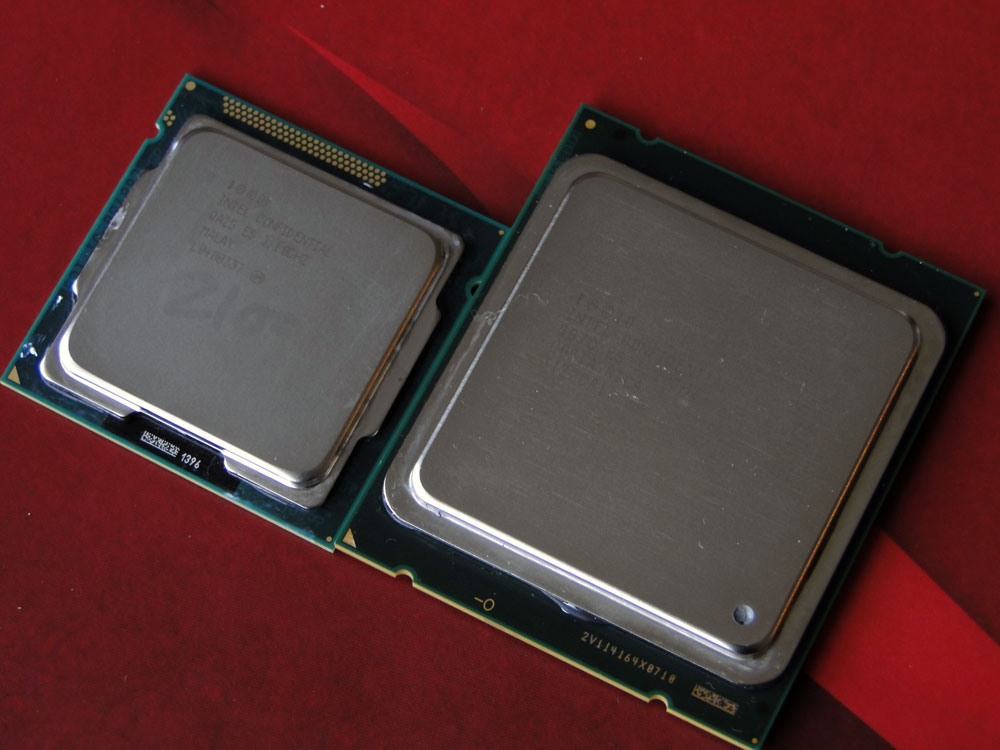 The total price difference then comes to about $100, in favor of the Sandy Bridge processors, if you are willing to use the stock cooler in the retail packaging.  We could have made this more had we gone with one of the under $100 Z68 motherboard but those available at the $140 price range were closer in feature parity.

Also, the Core i7-3820 isn’t available as of this review and Intel would only give us the time frame of "1-2 months".  You should be able to find it for sale online sometime in February.

Those debating between the Core i7-3820 and the Core i7-2700K then have to decide if the added memory support and additional PCIe bandwidth are worth the added cost.  If you are a heavy multi-GPU user then that might be the case, otherwise we are kind of at a standstill.  Motherboards based on the Z68 platform available now should be able to support Ivy Bridge in the coming months but in truth we don’t expect the processor portion of that upgrade to be particularly noteworthy – only the GPU side of the processor will see significant jumps.  On the other hand, Ivy Bridge-E may or may not even actually use the LGA2011 socket, as Intel hasn’t confirmed, though all indicators show that it will.

So with similar remaining life spans for the sockets, deciding which one is right for you is rather difficult.  Do you want more than the 16 lanes of PCIe that SNB offers?  Do you want to make sure you’re ready for PCIe 3.0 speeds?  Do you want larger memory capacities or have particular application scenarios that will utilize it?  If so, the Core i7-3820 is going to be a great value for your next system build.  If you answered no to those questions, or have a particular interest in processor graphics and QuickSync, then going with a lower cost Z68 platform looks like the way to go.

Either way, it is nice to have some competition in the processor field again, even if it comes only from Intel. 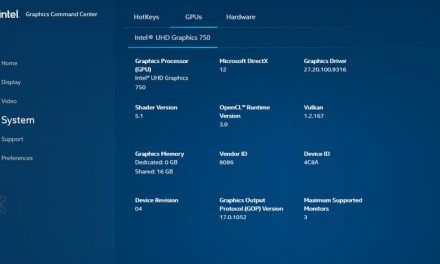