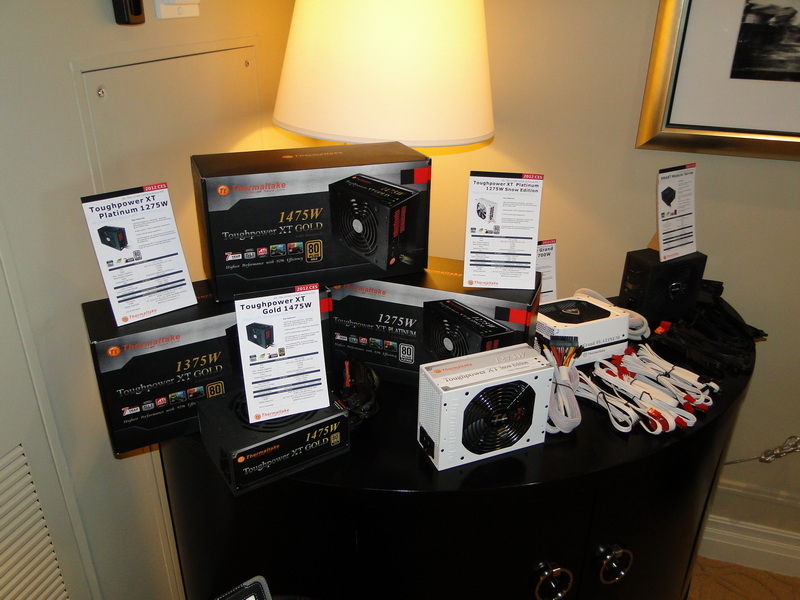 Last year at CES, ThermalTake had a rather sparse room of equipment to show off.  This year, the room was much fuller in terms of new and interesting products.   ThermalTake is a company that is not afraid to jump into new categories, and in this case we are seeing two areas that are a bit foreign to most PC enthusiasts.

ThermalTake was one of the first companies that did not have a background in power supplies to actually move into that industry.  The first series of power supplies were actually quite impressive for the time, and they helped to set a new standard that would eventually be followed by the likes of Coolermaster and Corsair.  This year they are introducing some improvements in their design and component choices that should allow them to approach the quality and features of industry leaders like Silverstone and Corsair.  ThermalTake has the Platinum series which promises up to 93% efficiency and the platinum rating.  They are also offering slightly lower gold rated supplies that are now available in white.  ThermalTake is a rather fluid company when it comes to products though, and it will be interesting to see what actually gets delivered to market vs. what all was shown.  We will see the Platinum series and the white products, but some details may change as well as differences in cable choices.  They did show off the massive 1475 watt unit which is also able to power your arc welder…

Read more about this visit here. 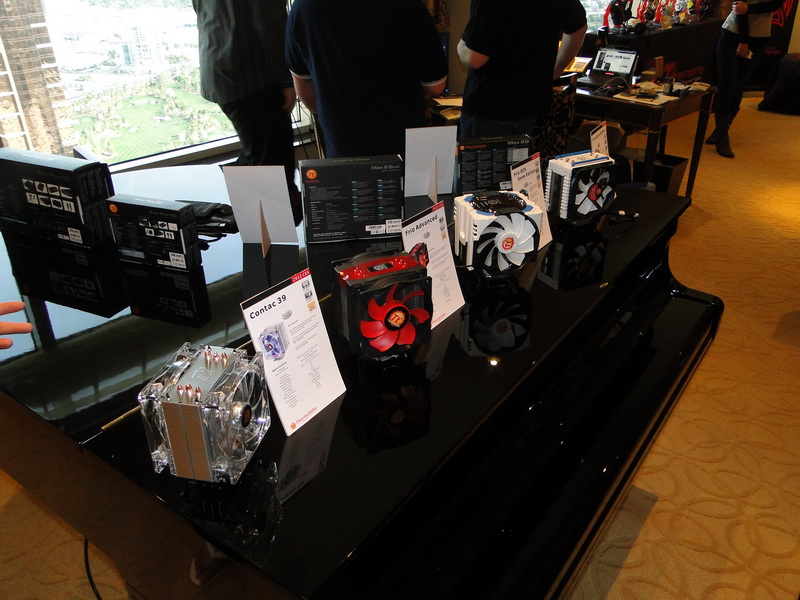 The company originally made its name in the cooling market, and they are still pushing those products.  The Frio line is getting revamped, and we may see some interesting variations.  Some of the lower end Frios were updated and are aimed at the OEM market.  The higher level products will be shopped around to the different vendors, but again we might not see all of the products shown above in a retail environment.  If there is enough interest, we could see the different colored versions out on the market, but it again depends on what retailers are interested in. 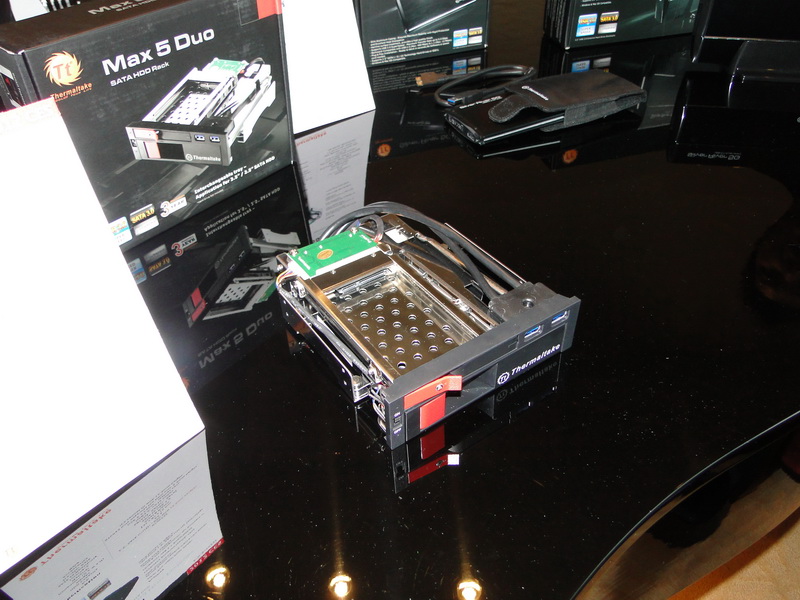 TT has done well with USB 3.0 docking stations, and here we are seeing some new products that look to further their offerings in this growing market.  With the lower prices on SSDs, there is a need for simple connecting docks that can either handle being a full time device that houses a drive or an easily accessible unit that can quickly eject the drive.  The most interesting device is the 5.25" Max 5 Duo that supports not just a 2.5" SSD docking port, but also a standard 3.5" drive, with the addition of USB 3.0 header support.  Not everyone will have a use for it; however, it is going to find some big supporters from people who like the dock functionality without having to use USB 3.0 (the drives are connected to the SATA headers on the motherboard) or those standalone docks. 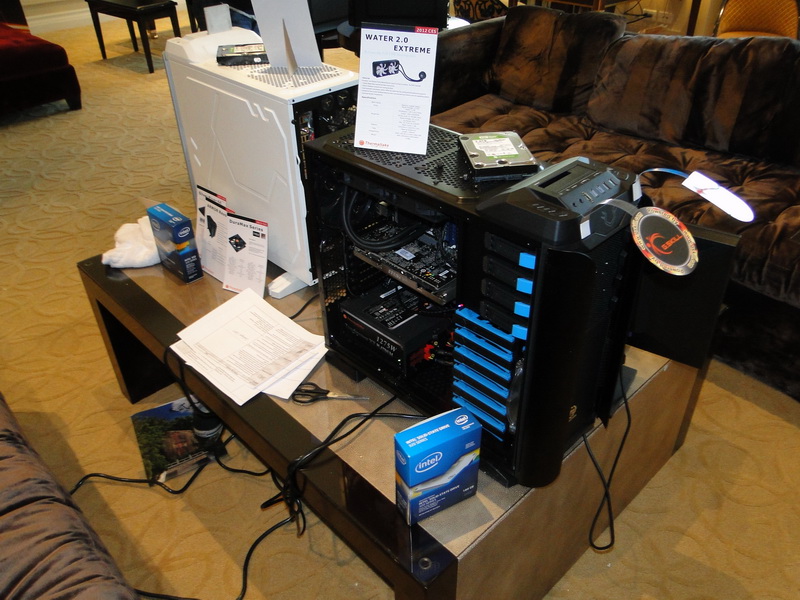 The success of the Level 10 GT has spawned a much lower cost product, the Level 10 GTS.  This is a smaller case with less features, but it has most of the functionality of the earlier Level 10 products. 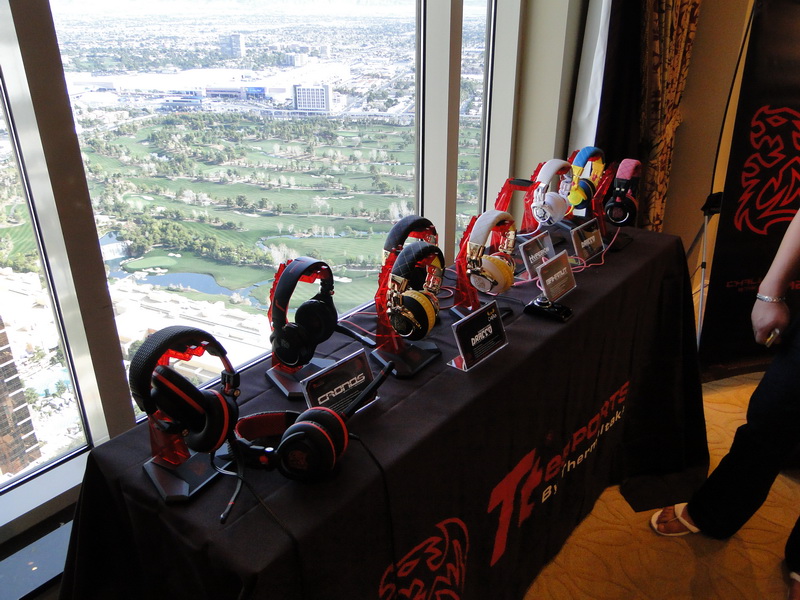 Headphones are quite the rage now, just ask Monster and Dr. Dre.  TT is hoping to land some of those potential customers with a whole series of designer style headphones.  Some are even coated with 24 kt. gold…  Prices should be decent, and for the more music oriented models we can expect sound quality that is consistent with most $100 US pairs of cans. 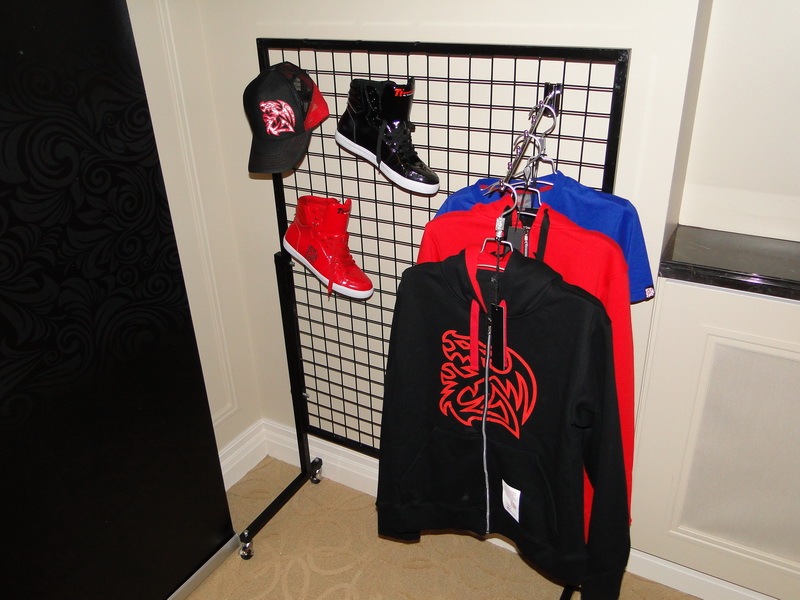 Finally we were shown TT’s latest foray.  Clothing.  Yes, it is TT branded clothing and shoes/apparel.  This apparently is quite the rage in the far east, so we can expect to NOT see these products coming to the US.  Sick shoes though…