Gaming. Laptop. Portable. These may well be the three most contradictory words in the PC industry. It’s been possible to game on laptops for years, but making a high-quality gaming experience portable is a goal rarely achieved.

Alienware made a stab at resolving the contradiction in 2010 when it released the M11x, but the result was questionable. No one can argue that the M11x isn’t portable, but its gaming performance is no better than a 15.6” laptop with mid-range discrete graphics. There simply isn’t enough room in the chassis to cool a larger, more powerful GPU. Worse, the M11x is simply too small for most people to use every day.

Enter the Alienware M14x. The larger display size of this laptop makes it possible to equip a more powerful GPU as well as a full-power Core i5 processor rather than a low-voltage model. Let’s look at the full specifications. 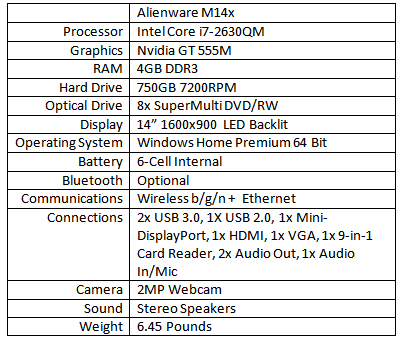 We can already see that the M14x will easily outperform its smaller cousin. The better hardware increases price as well as size, however – the base is $1099 and our review unit, featuring upgrades like a quad-core processor and 1600×900 resolution, rings in at $1274.

It’s also possible that the beefier hardware and higher display resolution will significantly decrease the decent battery life that makes the M11x portable. Let’s see if the M14x turns out to be a great compromise or an incomplete package.

The Alienware M14x looks like…an Alienware. The company goes to great lengths to provide all of its laptops with a unique look that ties all of its products together. Though obviously one of the smaller laptops offered, the M14x has the same beefy, muscle-car-like lid found on other Alienware. It also includes the same faux-vents at the front. They’re non-functional, but do provide an outlet for the custom LED lighting which can be configured using pre-installed software tools.

All of these flourishes translate to a laptop that absolutely drips masculinity despite its decidedly geeky intent. This is what happens when you kidnap a normal laptop, put it through a top-secret government combat training program, and then release it back into the real world.

The LEDs and muscular surfaces could trick you into thinking this laptop puts form over function. In truth, it’s plenty practical. All surfaces (besides the display) are as matte as you’ll find on any ThinkPad, though the luxurious soft-touch coat used is easier to scratch than the hard plastic used on business laptops. 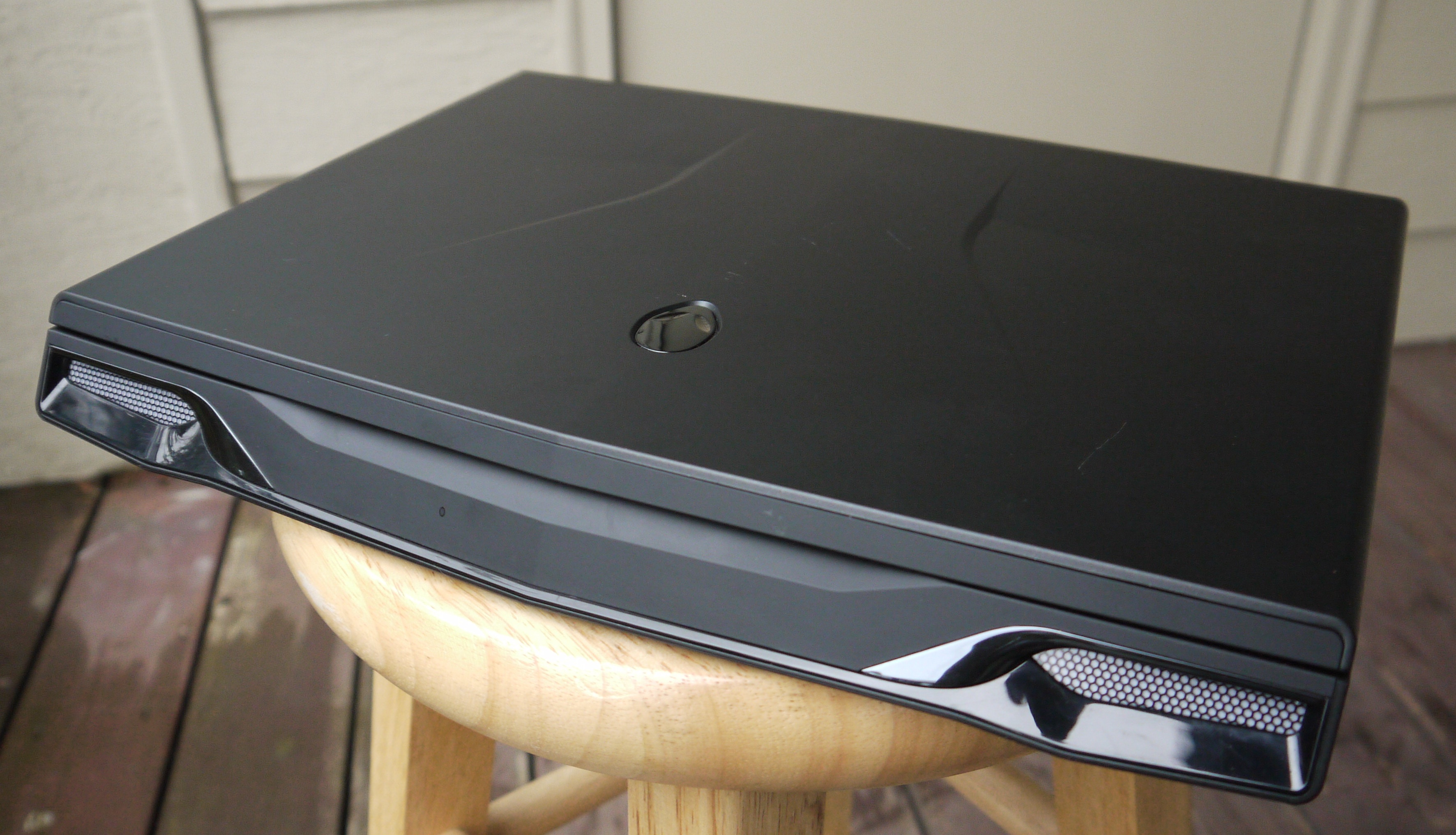 Build quality is a mixed bag. Chassis flex is minimal even when the laptop is handled by its edges, but certain surfaces feel flimsy when pressured. Twisting the display lid by its edges seemed to cause the display panel to move slightly inside its frame, and there’s a fair amount of keyboard flex as well.

Having a big frame gives the M14x plenty of room for connectivity. Two USB 3.0 ports are included, as well as an additional USB 2.0 port. Display connections include Mini-DisplayPort, HDMI and VGA while audio is handled by two audio-out ports and an audio-in/microphone port. Ethernet and a 9-in-1 card reader are made available as well. The power connection is notable because it connects in the rear of the laptop, which is preferable. 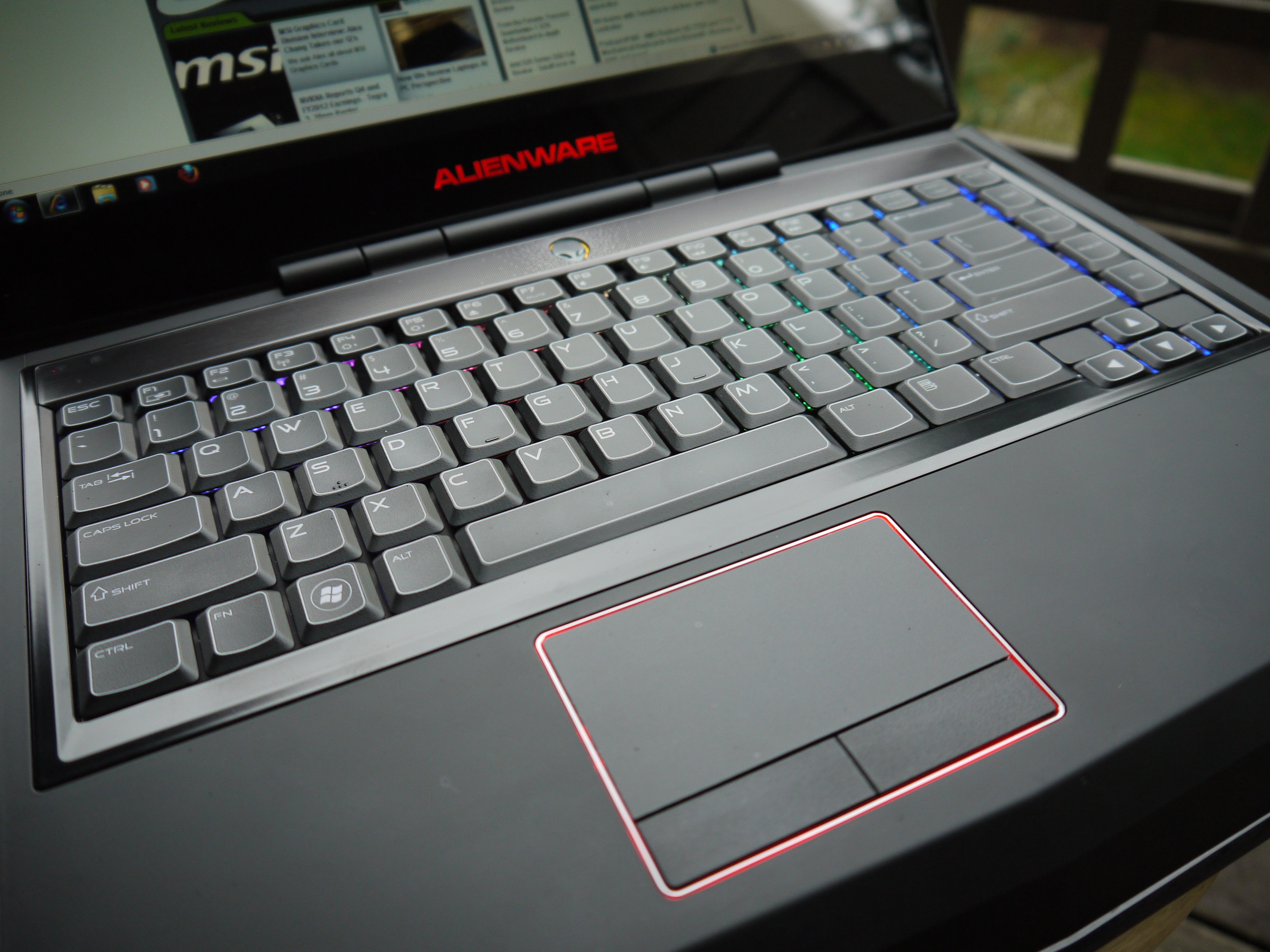 The Alienware M14x’s keyboard looks like…an Alienware. As with the aesthetic design, the keyboard is simply a version of the same keyboard used by every other laptop from the company.

That means you’re getting a beveled keyboard, which is rare these days. Key travel is also much better than average. Don’t mistake this for a typist’s keyboard, however. Key feel is soft and key flex is slightly noticeable even in normal typing. I would not be surprised if this was an intentional design decision, as long gaming sessions tend to be more tolerable on keyboards with low resistance, but it feels sloppy if you’re trying to do anything besides pwn noobs.

Backlighting is provided by the same AlienFX system that controls other lighting elements in the laptop. Lighting can be turned on or of using a function key, but you’ll need to open the pre-bundled AlienFX software to control color and brightness. Normally I would complain about this, but I don’t see any way to implement manual controls for the huge number of backlighting options available on this laptop.

Below the keyboard is a small touchpad. Alienware laptops always seem to tack these on as an afterthought, and the story is no different here. The surface isn’t large, the individual left/right buttons aren’t great and multi-touch is turned off by default. 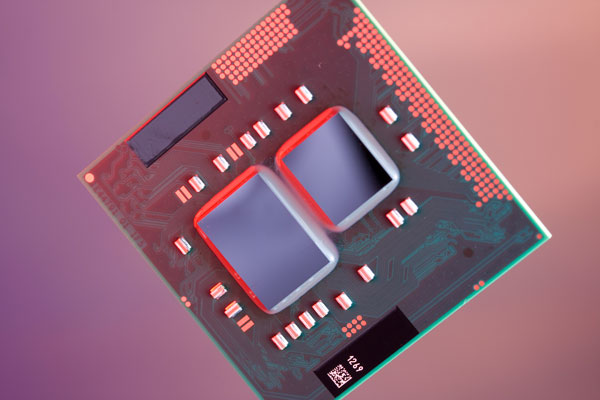 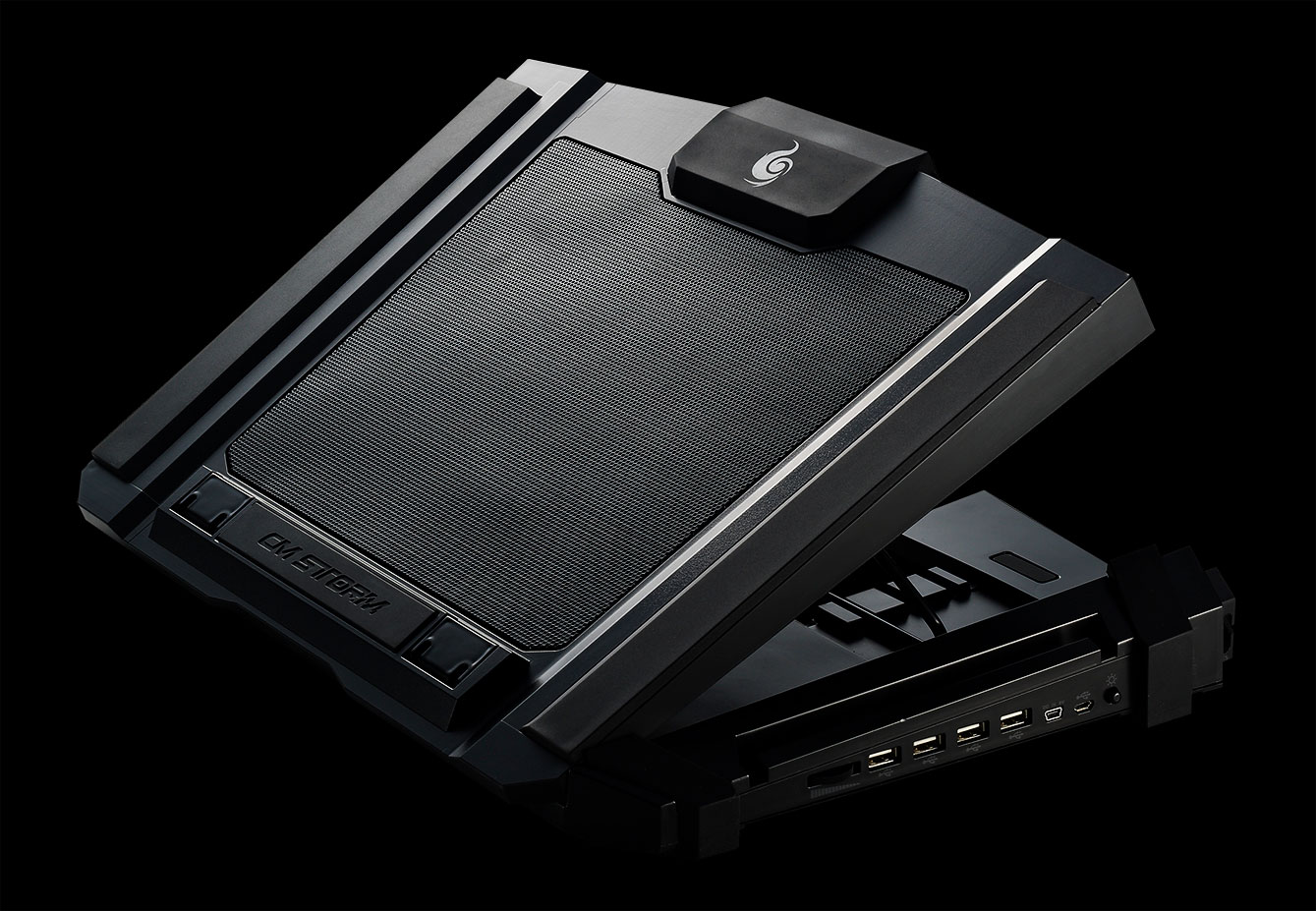