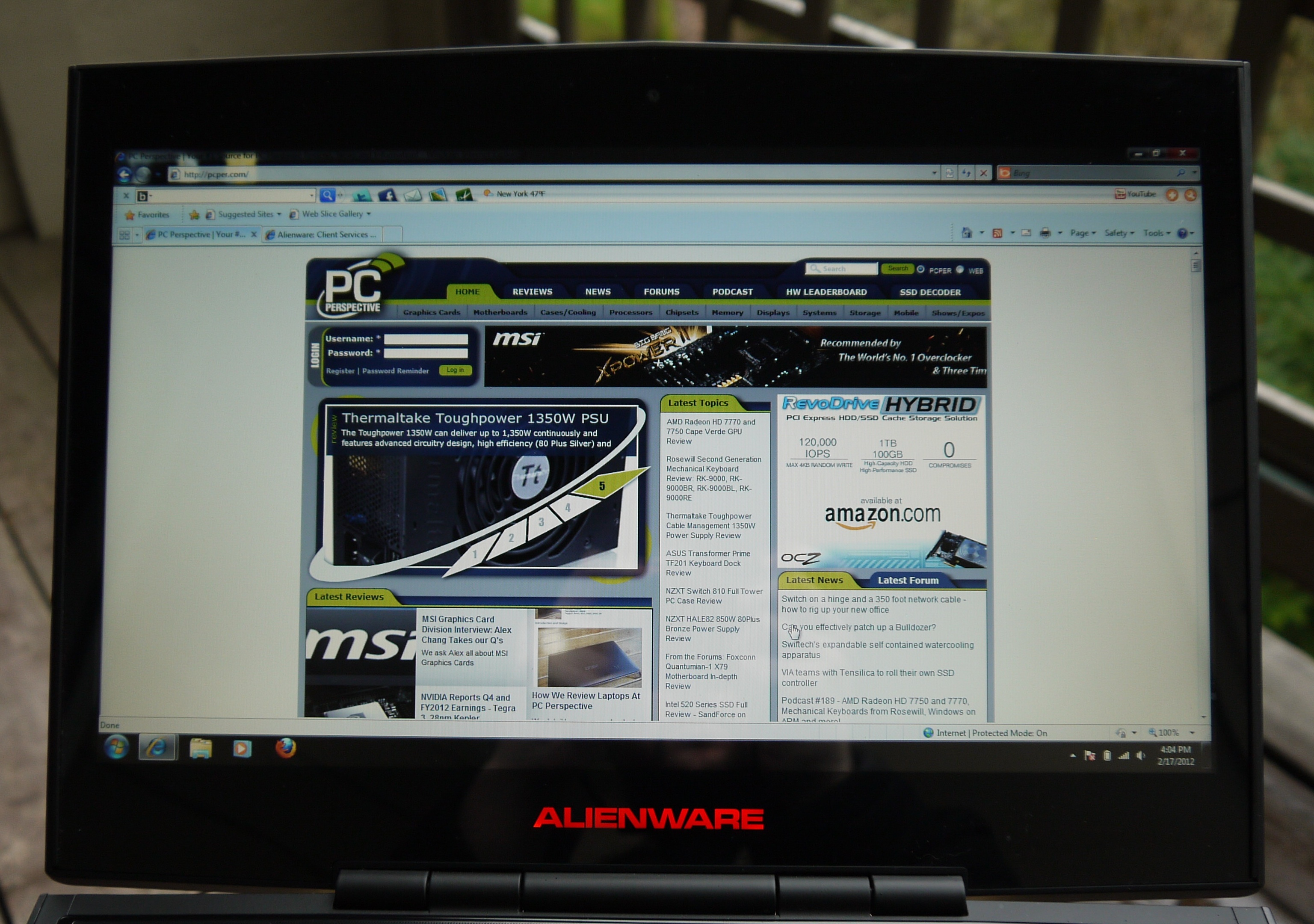 The base Alienware M14x comes with a 1366×768 display, but our review unit has the 1600×900 upgrade. Combining this resolution with a small display size results in sharp text and enhances the appearance of high-resolution photos and video.

Image quality is better than average, though short of excellent. Black levels are decent, but there’s a lot of banding in the darker portions of the gradient banding test. Overall contrast is fair, aided by a high-gloss display. Reflections are significant and the backlight isn’t strong enough to overcome them. Using this laptop in a bright room can be difficult –or at least annoying. 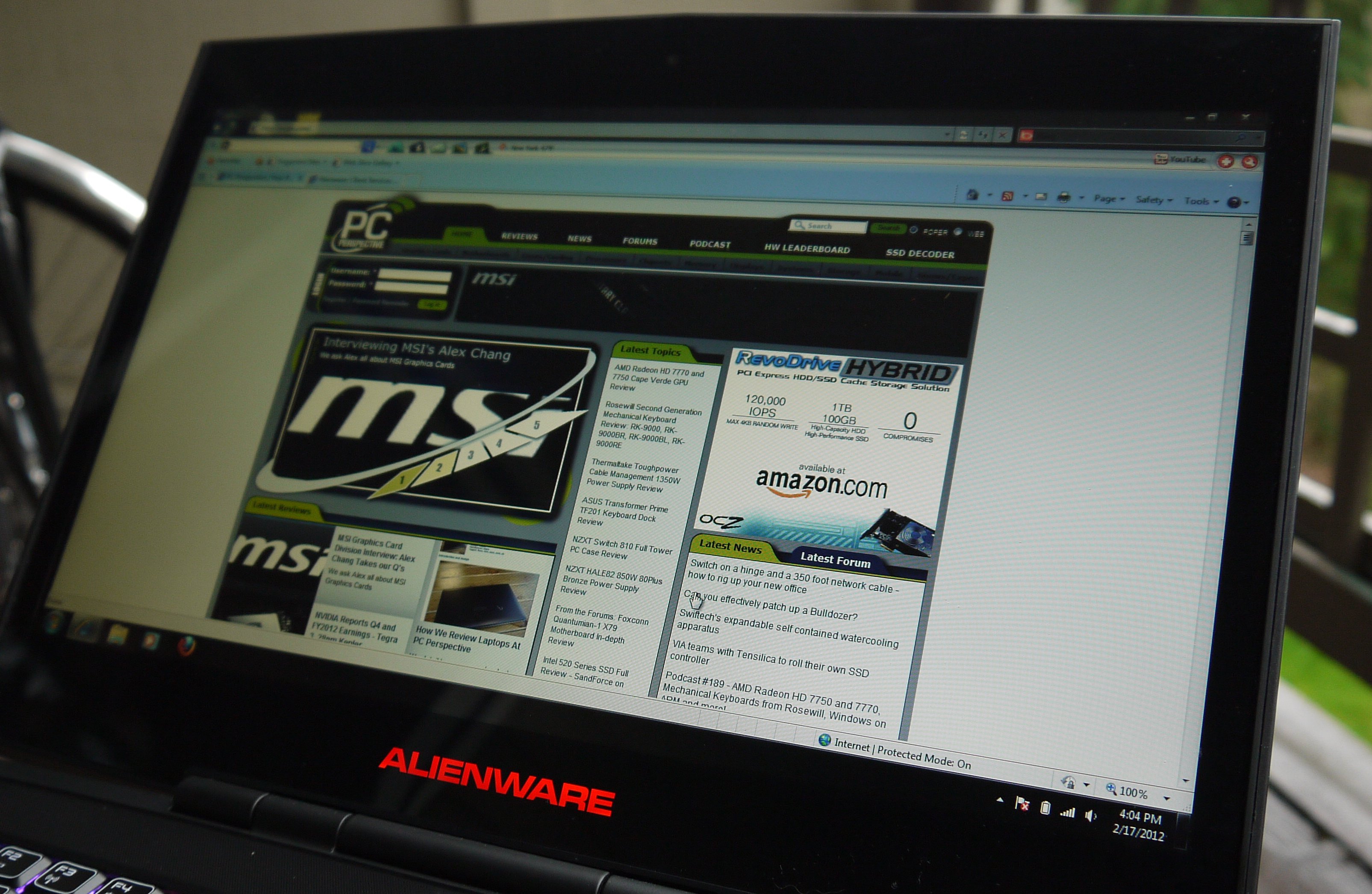 Though equipped with a small display, this is still a large laptop, and that leaves room for decent audio. Alienware has taken advantage of this to deliver quality that is robust and well balanced. It’s not the loudest, but it can reproduce limited amounts of bass without distorting everything else. This means that both games and music sound excellent. 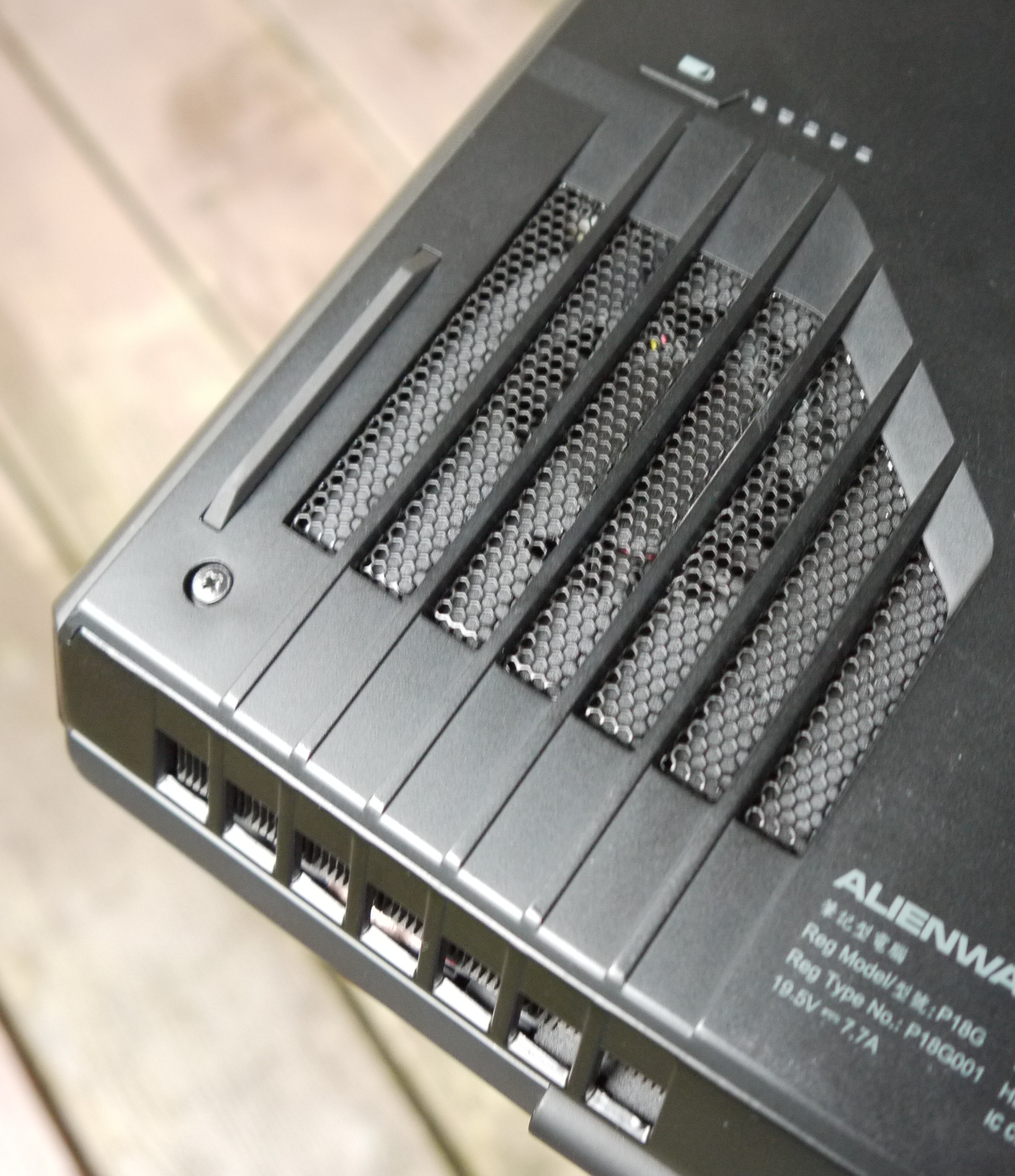 Alienware’s fake vents at the front obscure the real cooling system, which is tucked away at the bottom and rear of the laptop.  At idle the fans make virtually no noise, but you don’t have to do much to start a low whirr emanating from the laptop. Even flash games or productivity software can kick the fans in to low gear.

There seems to be a number of different pre-determined fan speeds, which are probably engaged based on internal temperatures. Furmark didn’t have much trouble forcing the fans to spin as quickly as possible, and in this scenario they were quite loud. In normal gaming, however, the fans don’t need to constantly spin at that speed – usually they’re a notch or two down from max.

You’d expect a high-end GPU and quad-core processor in a small package to generate a lot of heat. You’d be right, but perhaps not as right as you’d expect. External temperatures during our stress testing reached as high as 98 degrees near the rear of the laptop. That’s fairly hot, but there are plenty of other laptops that run warmer, such as ultrabooks.

Though the display may be only 14 inches, the rest of the laptop surrounding it is large. The M14x measures 1.49 inches thick and isn’t tapered in the least. Weight comes in at just over six pounds, which is far more than average for laptops of this size.

The fact that a high-end gaming laptop is thick and heavy shouldn’t come as a surprise. Portability is relative. A consumer ultraportable is far easier to tote around than this behemoth, but compared with other gaming laptops, the M14x is svelte and reasonably slim. It won’t fit into a standard laptop bag easily, but it will (probably) fit – something you can’t say about most 15.6” gaming laptops and all 17.3” laptops. 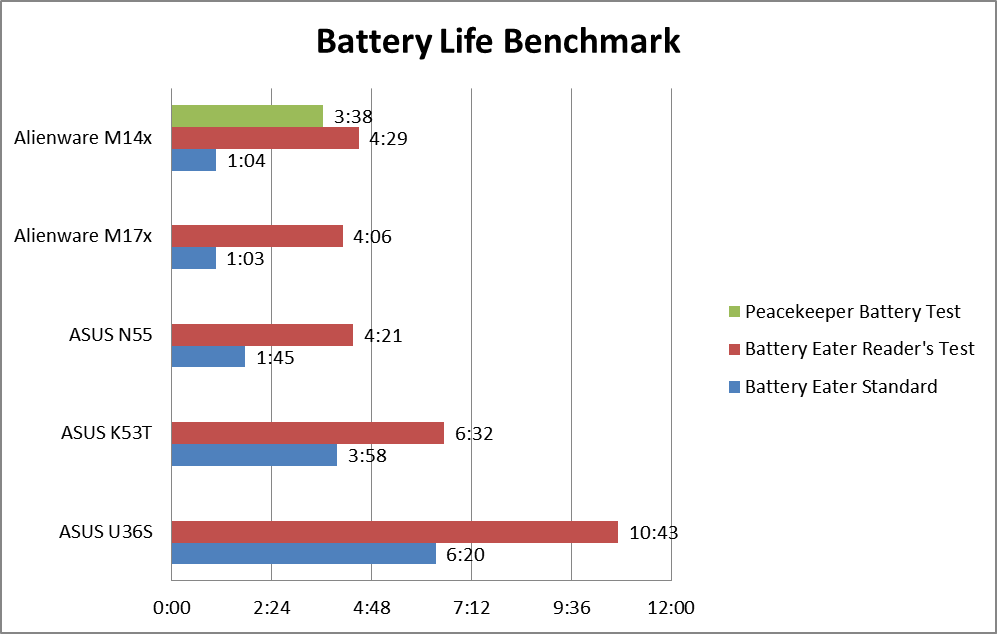 What about battery life? Battery Eater Standard chewed through the battery in just one hour and four minutes, but the lighter load of Battery Eater Reader’s Test extended life to four hours and twenty nine minutes. Part of the reason for this is Nvidia’s Optimus switchable graphics – the other part is the low idle power draw of Intel’s quad-core mobile processors.

This is below average for a modern laptop, but at least usable. The M11x we reviewed in 2010 actually did not last much longer, as it managed four hours and thirty eight minutes in the Reader’s Test – just nine more than the M14x.

All of this works – but not well. Responsiveness is part of the problem. Clicking on AlienFX means waiting about ten seconds for the software to load, and clicking on any option usually means waiting another five seconds for your selection to be registered. If you need to change your laptop’s lighting in a hurry, you simply won’t.

Worse, the software looks like it was written in Flash by a college intern. It’s not as if this software is new, either – both the M11x and M17x were equipped with the same when we reviewed them. As time goes on I’m becoming only more annoyed with it. Surely, Alienware could spend a little more time and money to come up with a better solution.