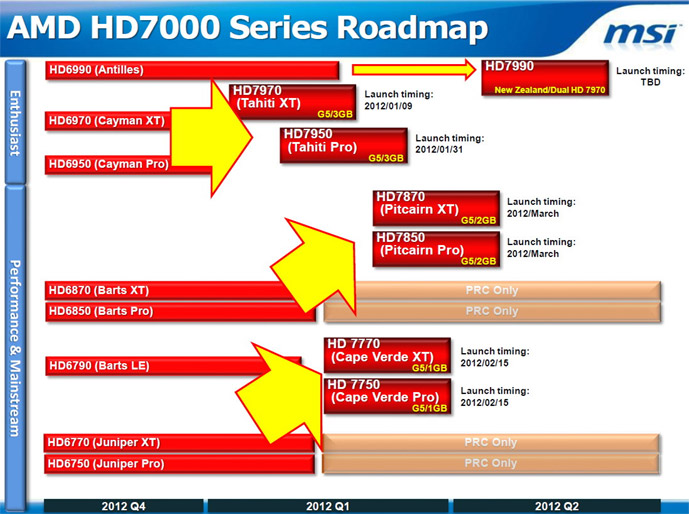 It is now February, and despite the weather outside (which feels like late spring/early summer) not following the middle of winter approach, the year has only just begun. AMD has really been on the ball with new releases; however, and has managed to launch two of the three planned enthusiast level graphics cards with the AMD Radeon HD 7970 and the Radeon HD 7950 on January 9th and 31st respectively. What this means is that the company has the rest of the year to dole out the cheaper and lower performance cards. Even so, if this leaked slide is to be believed, it looks like AMD will not be wasting any time and is planning to roll out a slew of 7700 and 7800 series card launches before the second quarter of this year is over!

As one step down from the 7900 series, Pitcairn represents AMD’s new "mid-range" parts.  As of now, the Pitcairn series includes Pitcairn XT and Pitcairn Pro which will be labeled the Radeon 7870 and 7850 respectively.  This recent leak does not stray too far from previous rumors, and both Pitcairn 7800 series AMD cards should see a March 2012 launch.  The article further specifies a March 6th, 2012 release as the first day of the German CeBit 2012 trade show.  In name, Pitcairn is the successor to the current Barts XT and Barts Pro based Radeon HD 6870 and HD 6850 cards, but is rumored to offer a similar level of performance to the 6950 and 6970 graphics cards. Allegedly, the cards will utilize 2GB GDDR5 memory on a 256-bit memory interface. Further, the Pitcairn XT that will be the HD 7870 will have 1536 ALUs (arithmetic logic unit) at 950 MHz, 96 texture units, 32 ROPs (Raster Operations Pipeline), 24 SIMDs (single instruction, multiple data), and a 120 watt TDP (thermal design power). The HD 7850 on the other hand will be slightly scaled back with only 1408 ALUs at 850 MHz, 88 texture units, and 22 SIMDs. Also, the memory clock will be scaled back. The reductions in hardware will give the card a supposed lower 90 watt TDP.

Moving down the performance ladder, AMD will launch the Cape Verde XT and Cape Verde Pro based Radeon Hd 7770 and HD 7750 cards later this month on February 15th, 2012. BSN claims that the Cape Verde cards will use either 1 GB of GDDR 3 or GDDR5 memory and will be in the $100 and $160 price range (with the 7770 on the high end of the scale and 7750 on low end). According to this article over at Tom’s Hardware, the 7700 series cards will be much smaller than their bigger brothers at a bit over 8 inches in length. They will feature a 128-bit memory interface, 6 pin PCI-E connector, approximate 100 watt power consumption, and a Graphics Core Next GPU architecture. 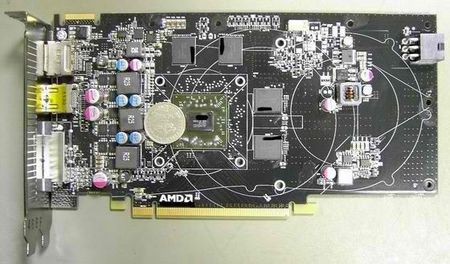 The remaining card that is likely to be of interest to our readers is the dual GPU monster that is the 7990.  This card will be based off of two 7970 GPUs.  Unfortunately; however, further details and pricing are not known.  There is speculation that the 7990 card will have 6 GB of GDDR5 graphics memory, 256 texture units, 64 ROPs, 62 compute units (CUs), and a massive number of stream processors at 4,096 based on the card being comprised of two 7970 cards.  Also, the launch date is still listed as "To Be Determined."

Lots of information is still speculation, but if it holds true, AMD is looking to get as much of a lead on Nvidia as possible by getting as many of their 7000 series out of the gate as possible.  Which 7000 series cards are you most interested in?