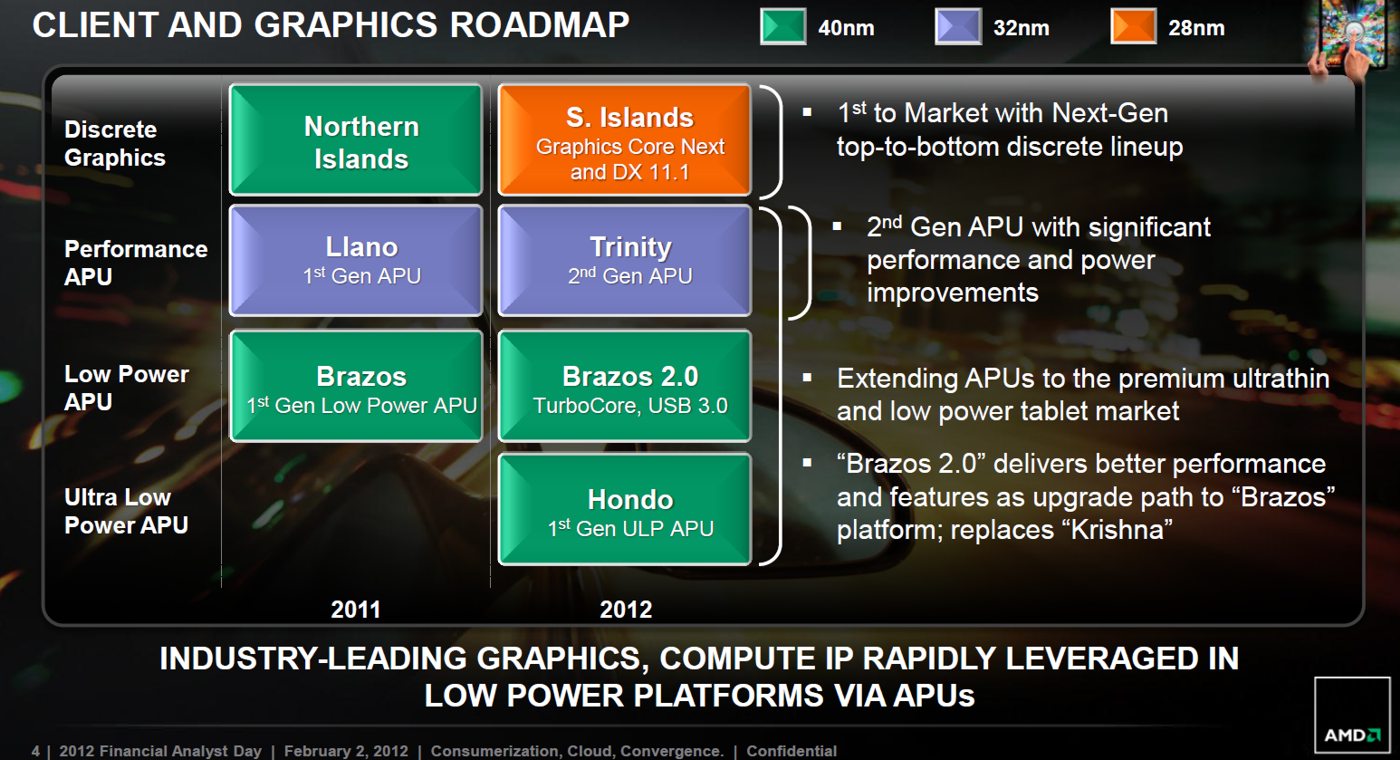 AMD Gives a Glimpse of the Near Future

AMD has shown us the future, and it is HSA

AMD has released an updated roadmap for these next two years, and the information contained within is quite revealing of where AMD is going and how they are shifting their lineup to be less dependent on a single manufacturer.  The Financial Analyst Day has brought a few surprises of where AMD is headed, and how they will get there.  Rory Read and Mark Papermaster have brought a new level of energy to the company that seemingly has been either absent or muted.  Sometimes a new set of eyes on a problem, or in this case the attitudes and culture of a company, can bring about significant changes for the positive.  From what we have seen so far from Rory and company is a new energy and direction for AMD.  While AMD is still sticking to their roots, they are looking to further expand upon their expertise in some areas, all the while being flexible enough to license products from other companies that are far enough away from AMD’s core competence that it pays to license rather than force engineers to re-invent the wheel.

The roadmaps cover graphics, desktop, mobile, and server products through 2013.

This first slide is a snapshot of the current and upcoming APU lineup.  Southern Islands is the codename for the recently released HD 7000 series of desktop parts.  This will cover products from the 7700 level on up to the top end 7990.  Of great interest are the Brazos 2.0 and Hondo chips.  AMD had cancelled the "Krishna" series of chips which would have been based on Bobcat cores up to 4 on 28 nm.  Details are still pending, but it seems Brazos 2.0 will still be 40 nm parts but much more refined so they can be clocked higher and still pull less power.  Hondo looks to be the basic Brazos core, but for Ultra Low Power (lower clocks, possibly disabled units, etc.) which would presumably scale to 5 watts and possibly lower. 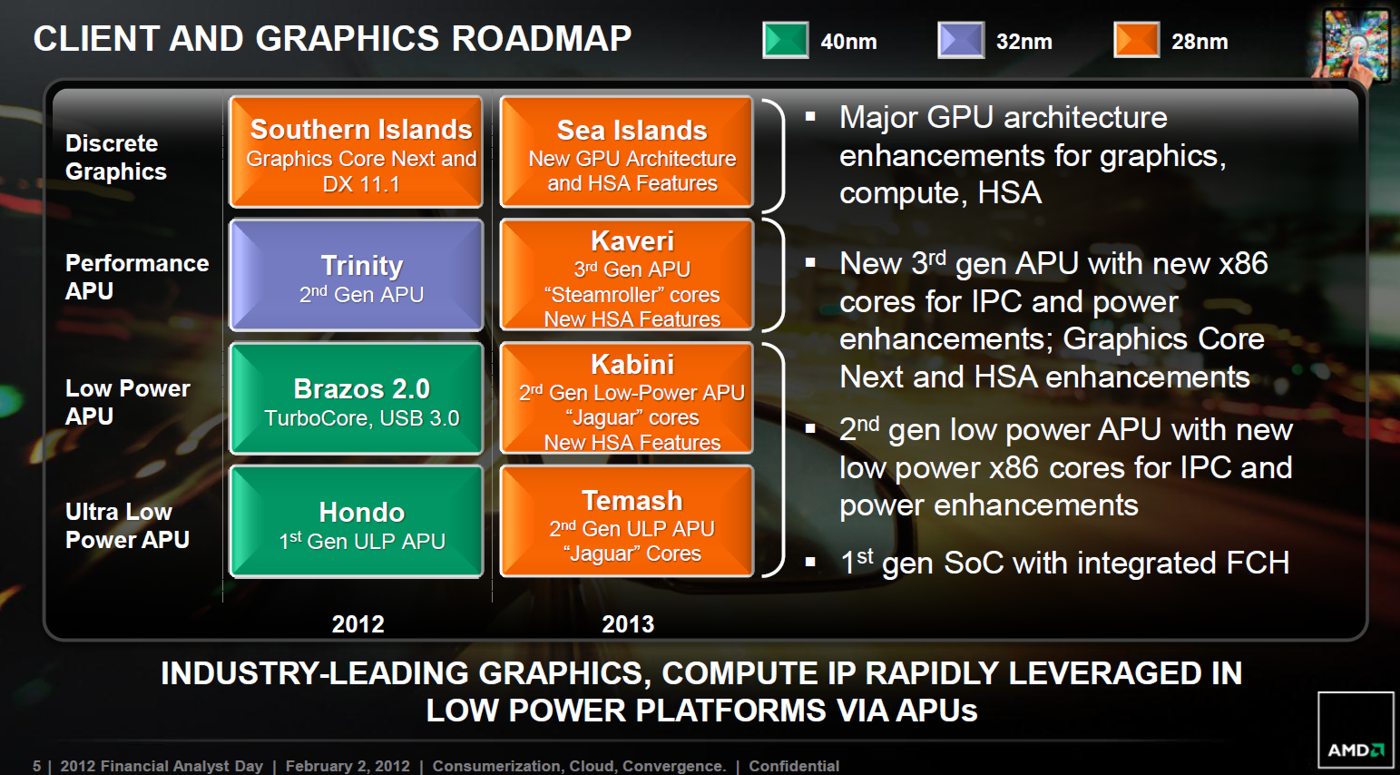 The next slide shows the upcoming new products in 2013.  Sea Islands will be the codename for the next generation graphics products from AMD.  It looks as if it could be a significant change from the current Southern Islands.  AMD appears to be doing this to more adequately integrate graphics into the computing fabric provided by modern CPUs.  HSA replaces Fusion, and the intent is to have GPU and CPU work far more closely than what we see today.

New CPU cores include "Steamroller" which will make its way into desktop and mobile products.  2013 will feature the 3rd generation APUs, and these products will utilize the GCN graphics architecture that AMD is introducing to us this year.  These APUs will be far more integrated than what we currently have.  This means different potential interconnects and most importantly the shared x86 memory space that we were introduced to in last years Fusion developers event.

Bobcat cores will be replaced by the new Jaguar cores in the low power and ultra low power markets.  These most likely will be based on 28 nm processes, and no other 3rd party Fab will have a working 22 nm product.  Temash and Kabini will also be true SOCs.  These chips will integrate the current FCH technology, so there will be no need for a dedicated southbridge with these parts.  This will cut down on system complexity and cost, as well as help to control power consumption of the system overall. 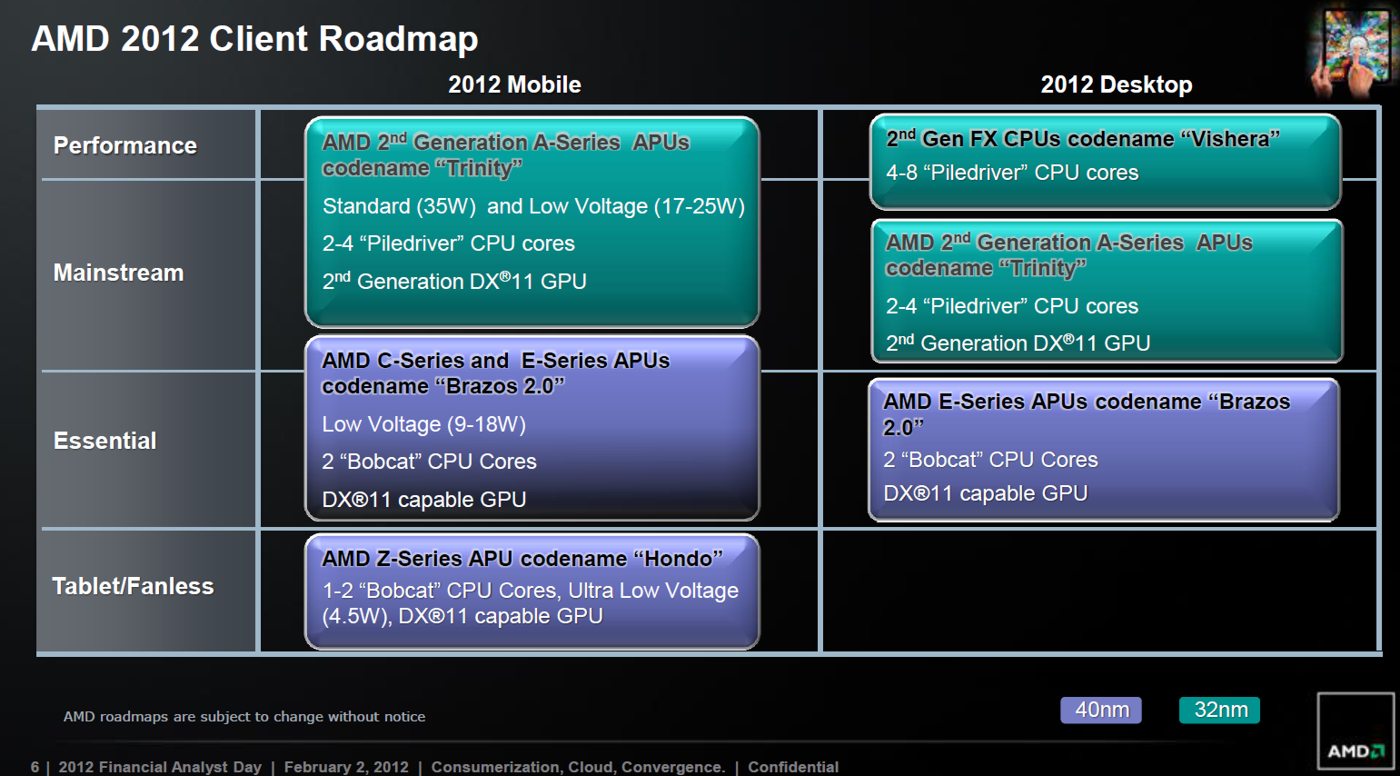 2012’s mobile and desktop roadmap are presented here.  Trinity looks to be prime mover for AMD in the desktop and mobile arenas.  This is a product that AMD is extremely excited about, and they feel that it will help them claw back marketshare from Intel.  Though Intel will have an advantage in their 22 nm process, AMD feels that they can match the overall thermals and CPU performance, all the while bringing a better overall graphics experience through both hardware and software.  Piledriver will make it to the AM3+ market, but the CPU design and architecture will be a step above Piledriver featured in Trinity.  AMD is going with a tic-toc strategy of their own, but they will release a new processor architecture with the APUs, but the standalone CPUs will get a more refined and upgraded core based on that new architecture.  All indications at this point see AMD being much more competitive in terms of CPU performance with the Vishera product.  We also see that Hondo will go down as low as 4.5 watts, which should allow it to be integrated in tablets fairly effectively.  Do not expect AMD to get into handsets anytime soon though.