Asus sure does have a snappy naming scheme.  What all we get above is that the card is a DirectCU based product with 1GB of GDDR-4 and the V2 means that it is the second version of this board, but with a 10 MHz overclock vs. stock.  Clear as mud? 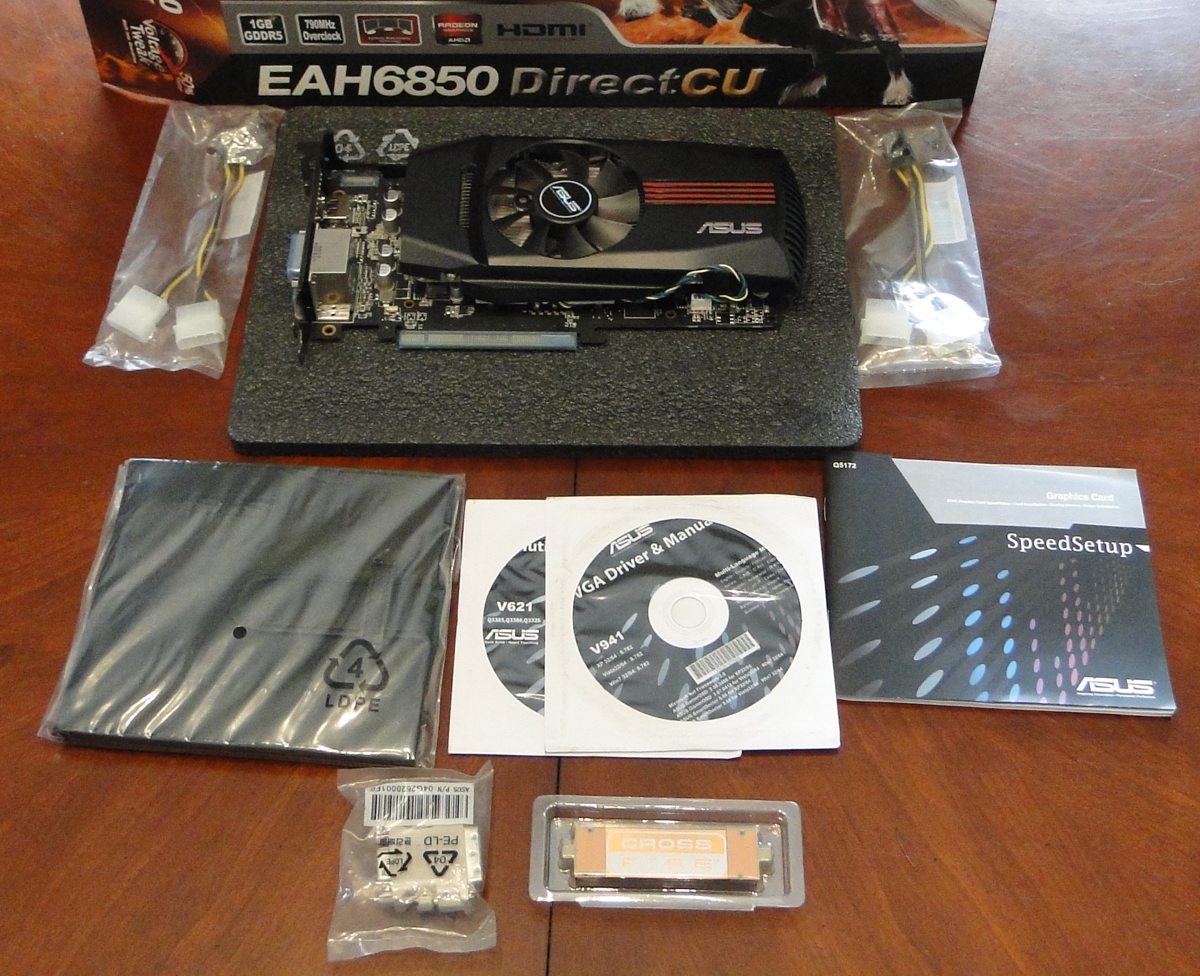 Oddly enough, the bundle for the lowest end card is the most complete.  Asus even throws in a CD case made of the finest leatherette.

The EAH6850 is based on the Barts architecture from AMD.  This is something of a stopgap revision between the original VLIW5 HD 5000 series and the VLIW4 HD 6900 series.  It is still a VLIW5 based chip, but AMD did some pretty significant reworking of the internals of this particular product; in many ways the SIMD structure resembles that of the HD 6900 series.  Barts is a much smaller chip than the original Cypress chip that powered the HD 5870/5850.  Essentially Barts is able to match up very closely in overall performance to Cypress, but uses far fewer stream processors to do that.  This makes the chip much smaller, and the overall TDP lower.  While it does not exactly match the performance of the larger (and hotter) chip, it does a very good job of getting close all the while cutting the overall costs of the chip and boards to make it very affordable.

The HD 6850 is the partially disabled member of the Barts family of chips.  There are two SIMD units disabled, giving the chip a grand total of 960 working stream processors.  There are 48 texture units and the full complement of 32 ROPS.  The memory bus is the full 256 bit unit, but due to a slightly less complex memory controller (saves on die size and transistor count) the memory runs at 1000 MHz (4000 MHz effective) as compared to the 1200 MHz (4800 effective) that the previous generation HD 5800 series could attain.  The Asus version runs at 790 MHz core, which is around 15 MHz higher than the reference clock.  This is not much of an overclock off the bat, but the card will have more legs once some voltage is applied to the GPU. 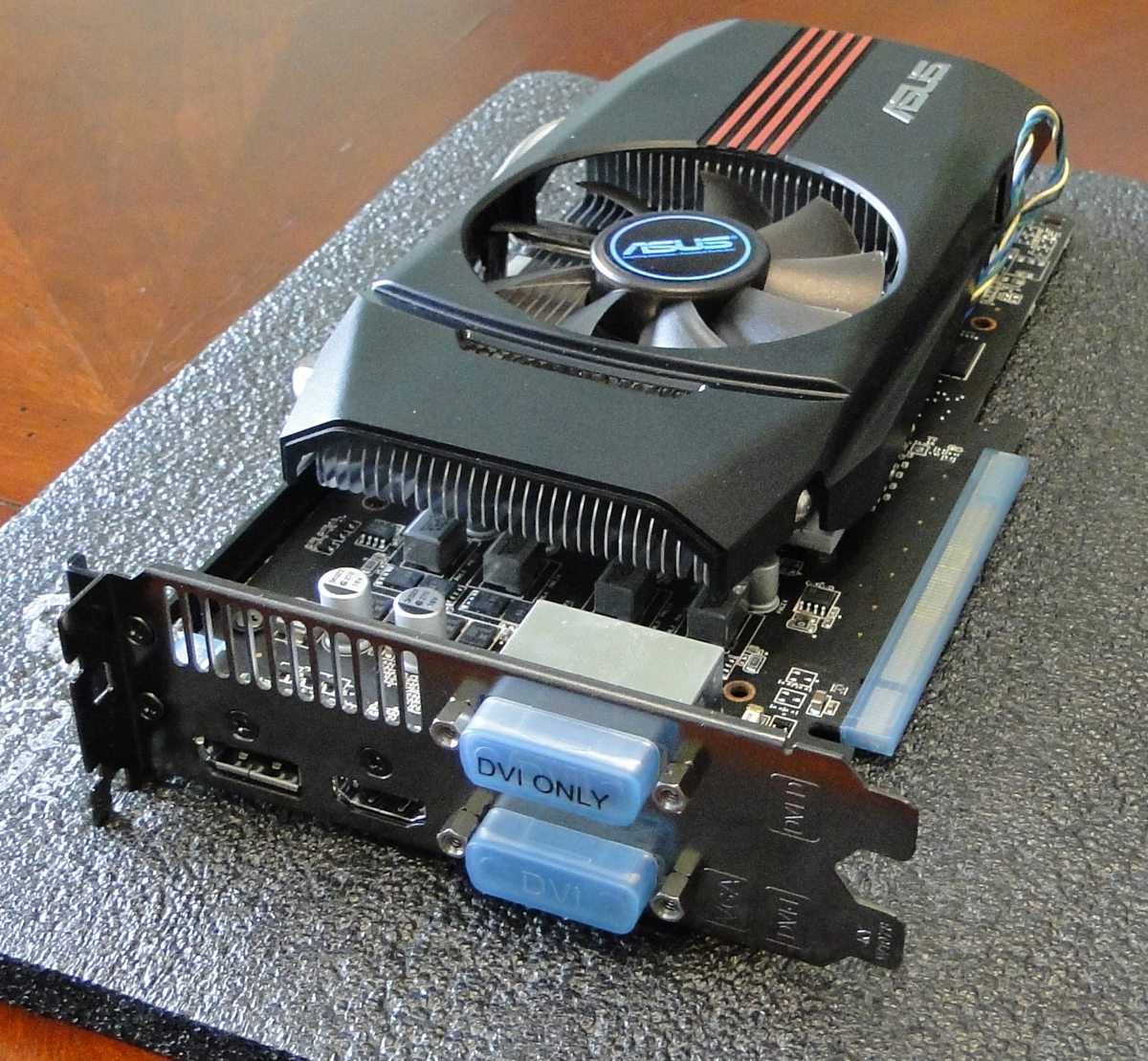 The full size Display Port is odd to see on most AMD video cards.  While the card does not have the horsepower to push three monitors in games, it is an option for those who need the workspace.

The EAH6850 is not exactly a small card, but it is certainly smaller than the DirectCU II cards further along in this article.  It requires 2 x 6 pin PCI-E power connections which gives it around 225 watts of power to play with.  The board design itself is not reference, so Asus did a few things to improve power delivery and overall efficiency.  It is a more expensive design than the reference product, but it does appear to pay off when it comes to overall build quality and overclocking performance.  The PCB is also significantly shorter than the EAH6870 which we look at later.

The board has 1GB of memory, which is good enough for most games at 1680×1050 and 1920×1080 resolutions.  We do get into corner cases with titles like Skyrim with the HD texture pack where performance can suffer due to these applications being memory bound.  For most users though, this will not have a huge impact on their enjoyment of many current games at reasonable quality levels.

The cooler on the board features two heatpipes and a single 70 mm fan.  This seems to be more than adequate for keeping this particular chip cool.  Between the disabled units on the GPU and the lower clockspeed, the cooling solution is not particularly stressed even under the most demanding of circumstances at stock speeds.  The PWM fan never gets loud, and it is software controlled so when overclocking the fan speed can be increased to maximum levels.  While at 100% it does get loud, at stock speeds and auto RPM levels, it never gets above a whisper.

The board itself is of typically Asus quality.  Everything seems nicely mounted, the PCB is the standard flat black, and the cooling shroud matches previous cards with the black with red stripes motif.  No parts were loose or falling off and the heatsink and shroud were securely attached.  The top portion of the card features the anti-warp bar to keep the PCB nice and straight. 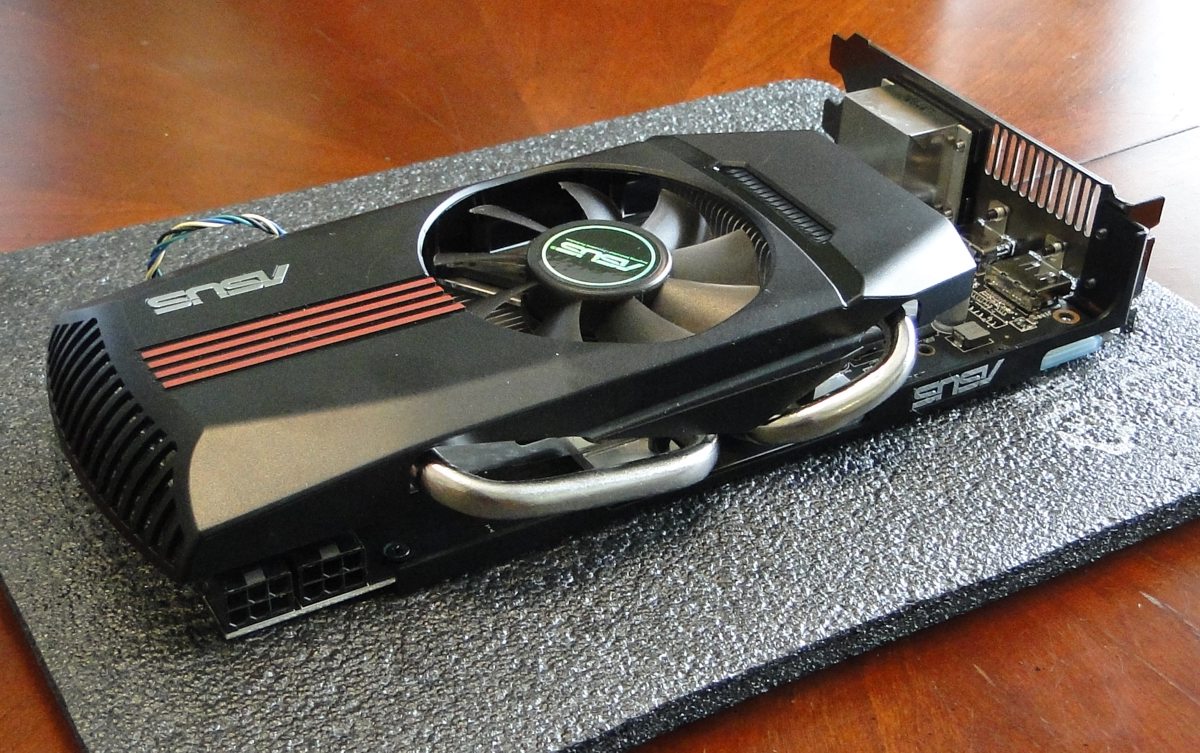 The design further steps away from the reference board by including a full sized Display Port output.  It also has a full sized HDMI 1.4a output.  The DVI connectors are like the other 6000 series products in that only one is dual link capable, and the other one supports single link DVI and analog output.  Though the fan and heatsink are not ducted, the backplane of the card does feature a goodly sized exhaust port for hot air to escape out of.  The card is capable of Eyefinity using multiple combinations of ports, but the most common would probably be the two DVI outputs with the Display Port being used for an active Display Port to DVI adapter.  The card also supports a single CrossFire connector, so triple CrossFire mode is not supported.

Currently the card can be found for around $159 US, but that is typically before any rebates are applied.  This is the same general price range as the newly introduced HD 7770, but the HD 6850 outperforms that card by a pretty significant margin.  The only advantage the 7770 has over the 6850 is that of slightly better power draw and heat production, as well as the GCN architecture.  In terms of gaming performance, the 7770 is no match for the 6850.