This DirectCU board takes it up a notch from the previous EAH6850.  The most noticeable difference is that of the larger 80 mm fan.  The heatsink is comprised of three directly touching heatpipes that then spread throughout the aluminum finned heatsink.  It also features a stiff backplate that also serves as a heatsink for the back of the card.  Since this back unit is installed, there is no need for a top brace, such as that installed on the EAH6850. 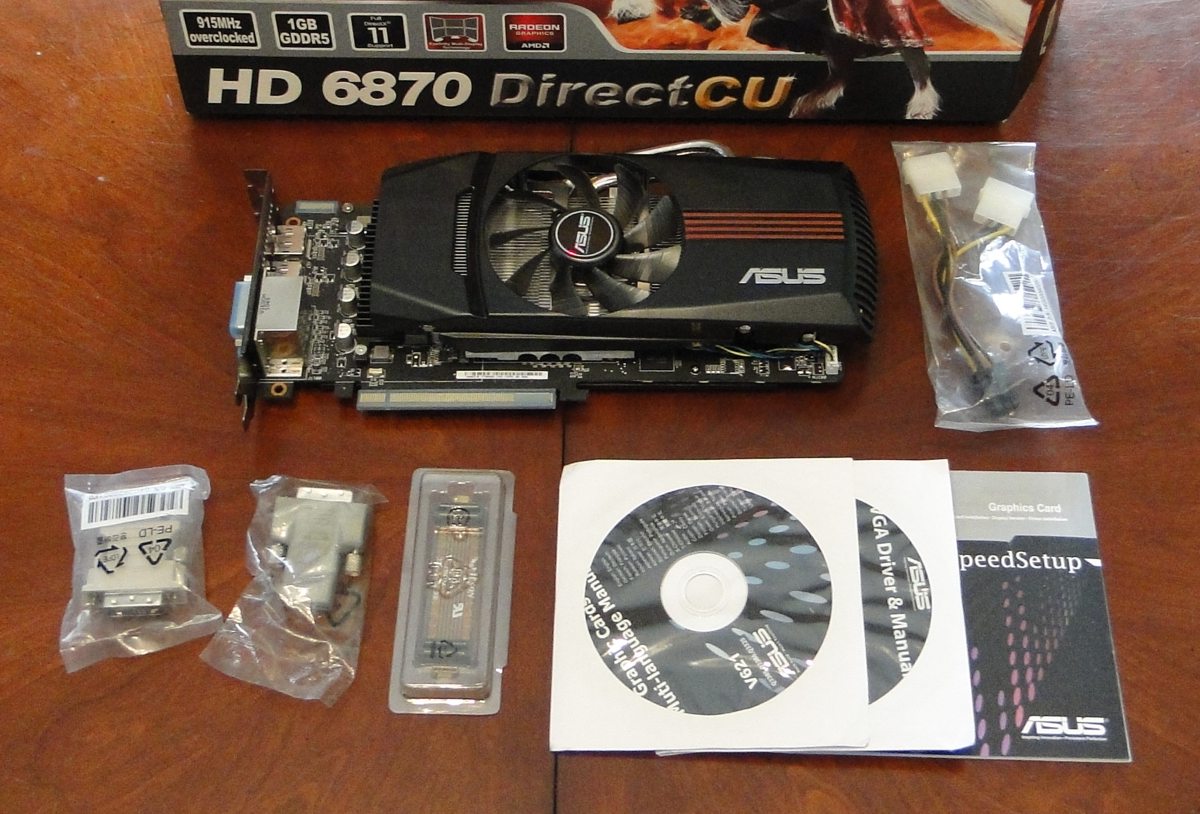 The bundle is fair and utilitarian.  No CD case though…

The card is outfitted with the “Super Alloy Power” components, which technically have a longer potential lifespan and higher tolerances to heat and power.  This is very similar to MSI’s “Military Class” components.  The board also supports 2 x 6 pin PCI-E power connections, so the card can handle upwards of 225 watts.  This is a much heavier card than the EAH6850 and the performance is a good step up as well. 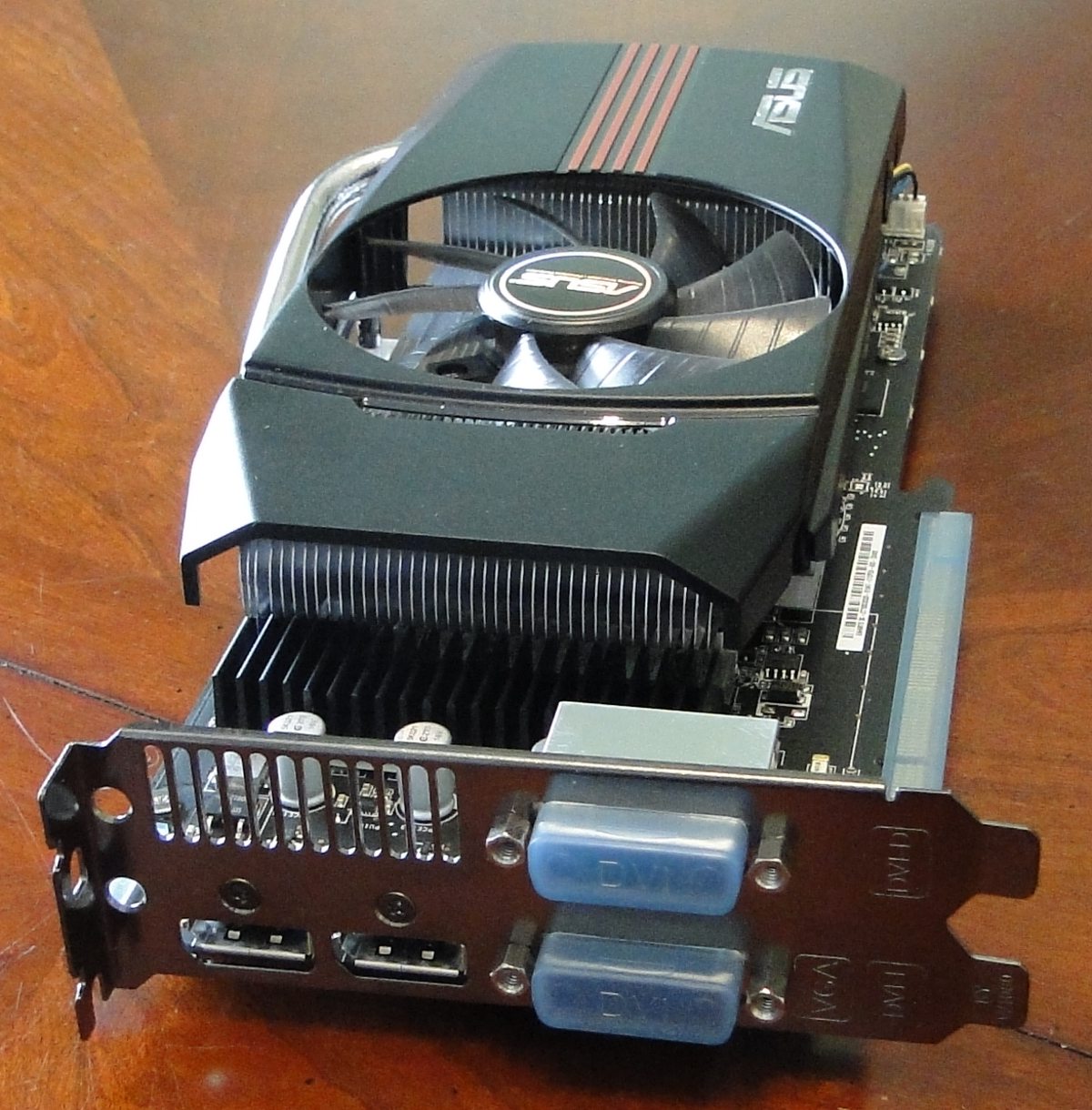 Even from this angle we can see that the card has a much heftier cooler than the EAH6850.  Note the two full size Display Ports.

The board again only features one CrossFire connection, so triple card setups are not supported.  The output plate is different from the previous card in that it features two Display Port outputs and foregoes the HDMI.  HDMI is supported through an included dongle which attaches to one of the DVI ports.  Analog D-Sub is also supported through a dongle attached to the DVI ports.  Only one DVI port is again dual-link capable.  The plate also has the vent as well so hot air can more easily escape from the case.  Three monitors maximum are supported for Eyefinity.

This particular model retails for around $179 US to $189 US before rebates.  Stock on this particular part is starting to wind down, so if a user is so inclined they best grab one pretty quickly.  AMD is wanting to get the HD 6800 series off the market as soon as possible so they can transition to the HD 7700 and upcoming 7800 series.  The HD 6870 is quite a bit faster than the HD 7770, and the extra $20 spent is well worth it in most cases.  The upcoming HD 7850 and 7870 look to exist in the $249 to $300 range for those products, so they are quite a bit more expensive than the HD 6870.  In many ways the HD 6870 is still a very worthy card for the money, especially when considering current and upcoming alternatives. 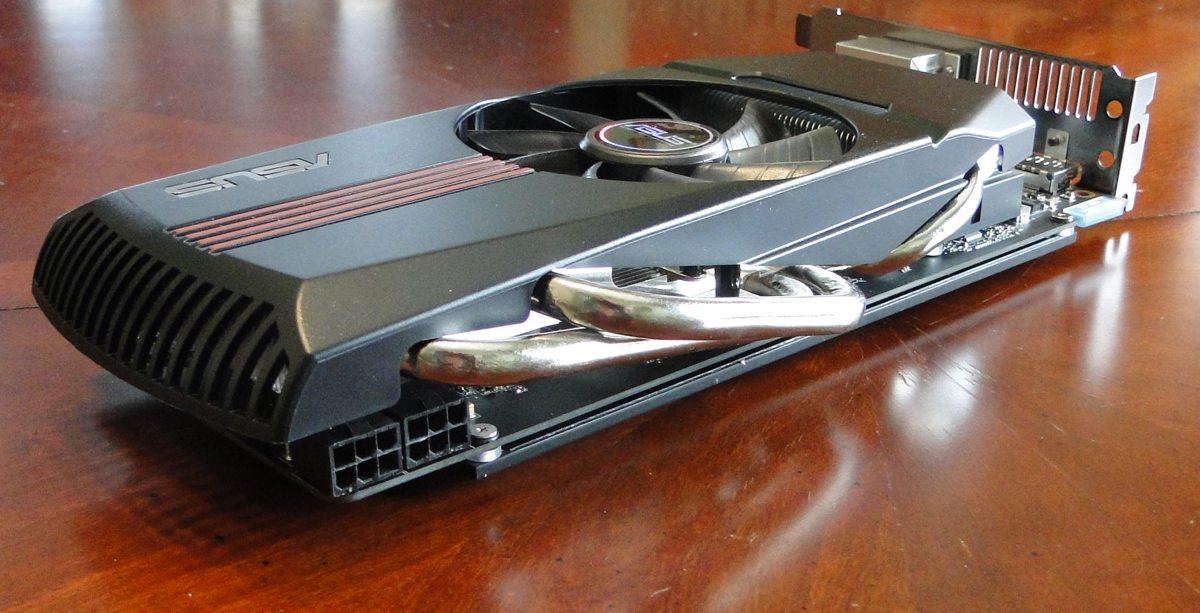 This card features three heatpipes in total.  Again, this is a far larger cooler than that featured on the previous card.

This card was actually the first HD 6870 that I have tested.  When the original cards were released some years back, I was not doing video card reviews as I am now.  These particular parts were overshadowed by the HD 6900 series, but they eventually made their way down to sub-$200 prices which made their price/performance ratio nearly second to none.  The only real downside to this particular card is again the use of a 1GB frame buffer.  It would have been nice to have seen products featuring 2GB of memory, but this might have taken it out of the sweet spot for price/performance.

The backplate acts as both a heatsink and a support for the card.

The card is again well built and under most circumstances the 80 mm fan is very quiet.  When the GPU was loaded up though, I could start to hear that particular fan.  In an overclocked state the fan would start to rotate faster and I could distinctly hear it wind up and down, depending on the application and the particular load at the time.  This is not as whisper quiet as the EAH6850, but neither is it a whirlwind of noise emanating from the closed computer case.  It is audible, but not annoying or bothersome.