The world of video cards is a much changed place over the past few years.  Where once we saw only “sticker versions” of cards mass produced by a handful of manufacturers, we are now seeing some really nice differentiation from the major manufacturers.  While the first iterations of these new cards are typically mass produced by NVIDIA or AMD and then distributed to their partners for initial sales, these manufacturers are now more consistently getting their own unique versions out to retail in record time.  MSI was one of the first to put out their own unique designs, but now we are seeing Asus becoming much more aggressive with products of their own.

The DirectCU II line is Asus’ response to the growing number of original designs from other manufacturers.  The easiest way to categorize these designs is that they straddle nicely the very high end and extreme products like the MSI Lightning series and those of the reference design boards with standard cooling.  These are unique designs that integrate features and cooling solutions that are well above that of reference cards.

DirectCU II applies primarily to the cooling solutions on these boards.  The copper heatipipes in the DirectCU II cooler are in direct contact with the GPU.  These heatpipes then are distributed through two separate aluminum fin arrays, each with their own fan.  So each card has either a dual slot or triple slot cooling solution with two 80 mm fans that dynamically adjust to the temperature of the chip.  The second part of this is branded “Super Alloy Power” in which Asus has upgraded most of the electrical components on the board to match higher specifications.  Hi-C caps, proadlizers, polymer caps, and higher quality chokes round out the upgraded components which should translate into more stable overclocked performance and a longer lifespan.

Asus sent three of their higher end NVIDIA offerings in DirectCU II livery for us to test.  We will take a look at performance and pricing of the three to see what would be the best fit in terms of budget and needs.

These software products are designed to overclock, monitor, and test the Asus graphics cards.  My luck with the Smart Doctor and GamerOSD utilities were somewhat poor.  After installing a few of the latest version, I would constantly get blue screens and lockups.  This may or may not be an issue for some, but considering this is the default software shipped on the CD in the box, it is a warning to some.

The idea behind these utilities is obviously good.  Previous Asus utilities that I have used proved to be quite capable.  AISuite II for example gave me no problems whatsoever, and I could access and adjust all of the major motherboard settings.

Smart Doctor and OSD also allow users to tailor their performance to what games they are playing.  Still running through Oblivion?  The utility sets the preferences for both image quality (AA and AF) as well as overclocking or underclocking the card.  OSD provides the ability to benchmark the card as well as capture video of whatever game is being played.  This is somewhat in tune to what F.R.A.P.S. does, but is free with that functionality as long as a user has an Asus based card.

Asus is in fact stopping work on Smart Doctor and GamerOSD.  In its place is the new GPUTweak program which Asus is aiming to compete with MSI’s Afterburner.  This program combines all of the best features from Smart Doctor and GamerOSD into one compact application.  Video can be captured, benchmarking can be done, and overclocking/monitoring are all wrapped up in one smart looking application.  GPU information is provided by integrating GPU-Z into the package. 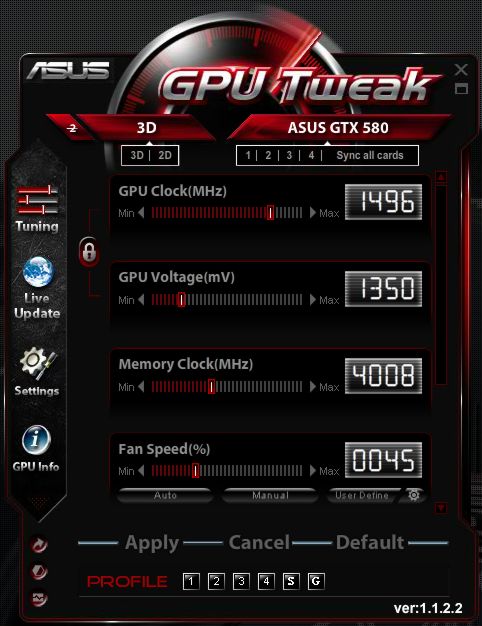 This is a much more robust application and can be considered to be on the level of what MSI has done with Afterburner.  It features voltage adjustments, overclocking, fan speed controls, and usage profiles depending on what a user wants to do.  Everything seems adjustable and the utility also features automatic BIOS and driver updates for the individual cards.

This application is much more in line with what is currently available in the marketplace.  Users should utilize GPUTweak rather than the older Smart Doctor and GamerOSD utilities.  This was launched not very long ago, so documentation about it (and links) on Asus’ site are sometimes harder to find.  It is there though!

All of the boards being reviewed here feature the “Super Alloy Power” components.  This is very much akin to MSI’s Military Class II’s component choices.  These feature a mix of hi-C caps, polymer caps, solid ferrite chokes, and the NEC Proadlizer chips (these last are high speed chips which deliver large amounts of power with decreased noise).

These components are designed to last a long time, handle higher loads, and provide smooth operation through the life of the card.  Exploding caps are a thing of the past, as well as that nice hum that the old exposed chokes would emit.  These components should not fail under most circumstances, and we only would expect some kind of negative result when used in extreme situations (eg. extreme heat or cold).

Overall component choice is excellent and the build quality these cards display is second to none.