We start out this roundup with what is essentially my favorite card of the group.  The GeForce GTX 560 Ti has long been the go-to member of the team when it comes to price/performance.  These cards typically retail well under $250.  The GTX 560 Ti is the successor to the wildly popular GTX 460.  These chips feature the full complement of 384 CUDA cores as compared to the GTX 460, which only had 336 cores.  It also has 32 ROPS and 64 texture units.  The 500 series of chips are major revisions of the previous 400 series, but do not add any features over the previous generation (except of course the greater ability to yield at higher levels and keep TDPs down). 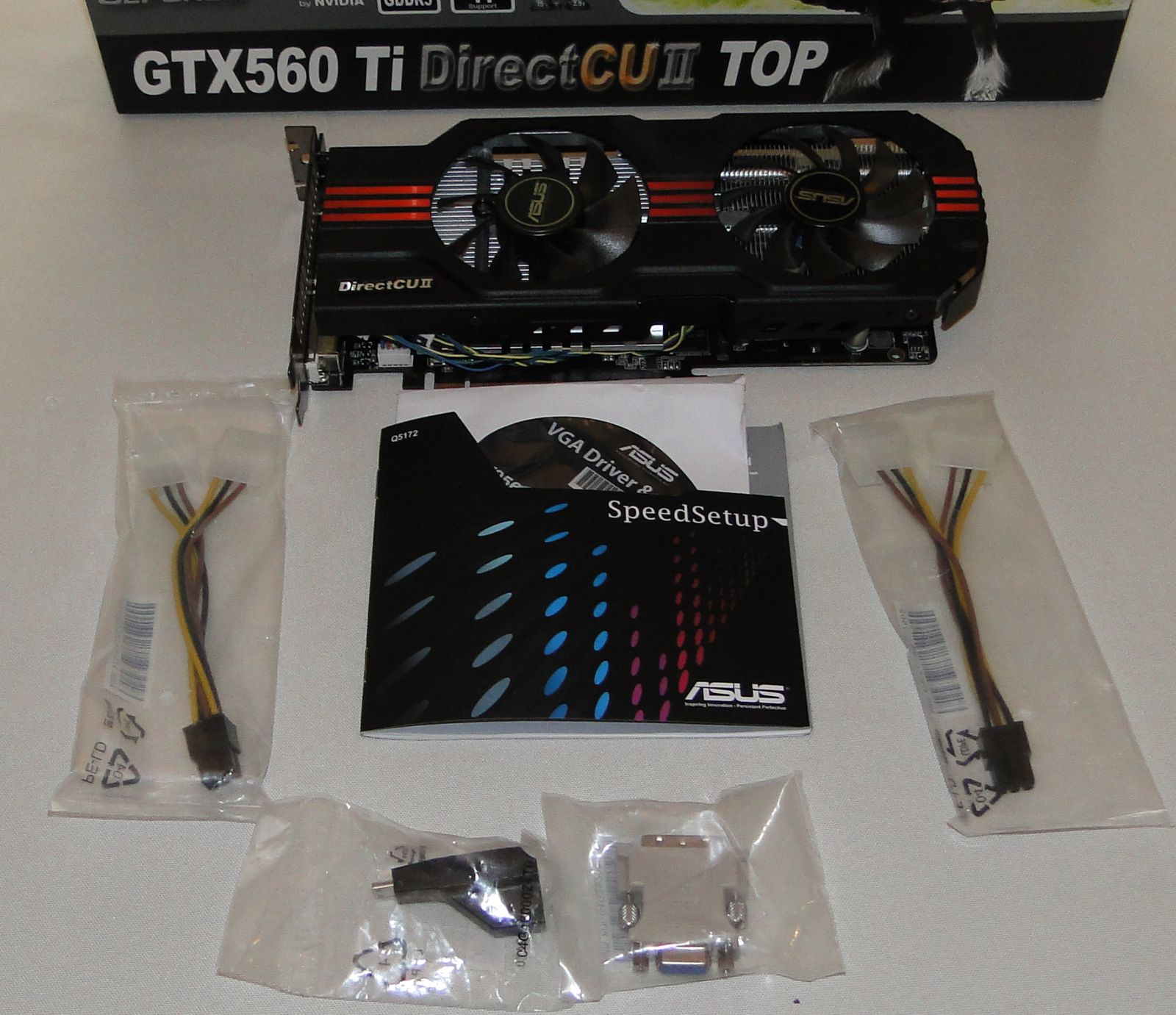 Of the three cards here, this one has perhaps the best overall bundle.

Asus has applied the DirectCU II cooling and board design to the 560 Ti with very nice results.  The card is clocked at 900 MHz core (1800 MHz shader) with the 256 bit memory bus chugging along at 1050 MHz (4200 MHz effective) and giving a bandwidth of 134.4 GB/sec.  Standard GTX 560 Ti cards are clocked at 822 MHz core and 1000 MHz memory.  The core overclock is a bit aggressive while the memory is not.  Then again the NVIDIA memory controller did not have high clockspeeds in mind as compared to the larger and more complex AMD units which can run at full GDDR-5 speeds up to 5400 MHz.  The card is somewhat limited by the 1 GB framebuffer, but in most applications this should not pose much of an issue.  If kept at 1920 x 1200 and below in resolution, even the latest games should not be too burdensome to this card.  This card typically retails for around $249, often with the hated mail in rebates attached.

DirectCU II is an original design, but it does share some features with other specialized coolers in the market.  The DirectCU name comes from the GPU directly touching the slightly flattened copper heatpipes that attach to the cooling fins.  Asus figures that instead of going for a sandwich affair (heatpipes sandwiched between two metal plates) it would be more efficient to go directly to the heatpipes.  There is merit to this idea, but then again it can be argued that a solid piece of copper will do a better job distributing heat to the individual heatpipes.  Either way, Asus chose the direct approach. 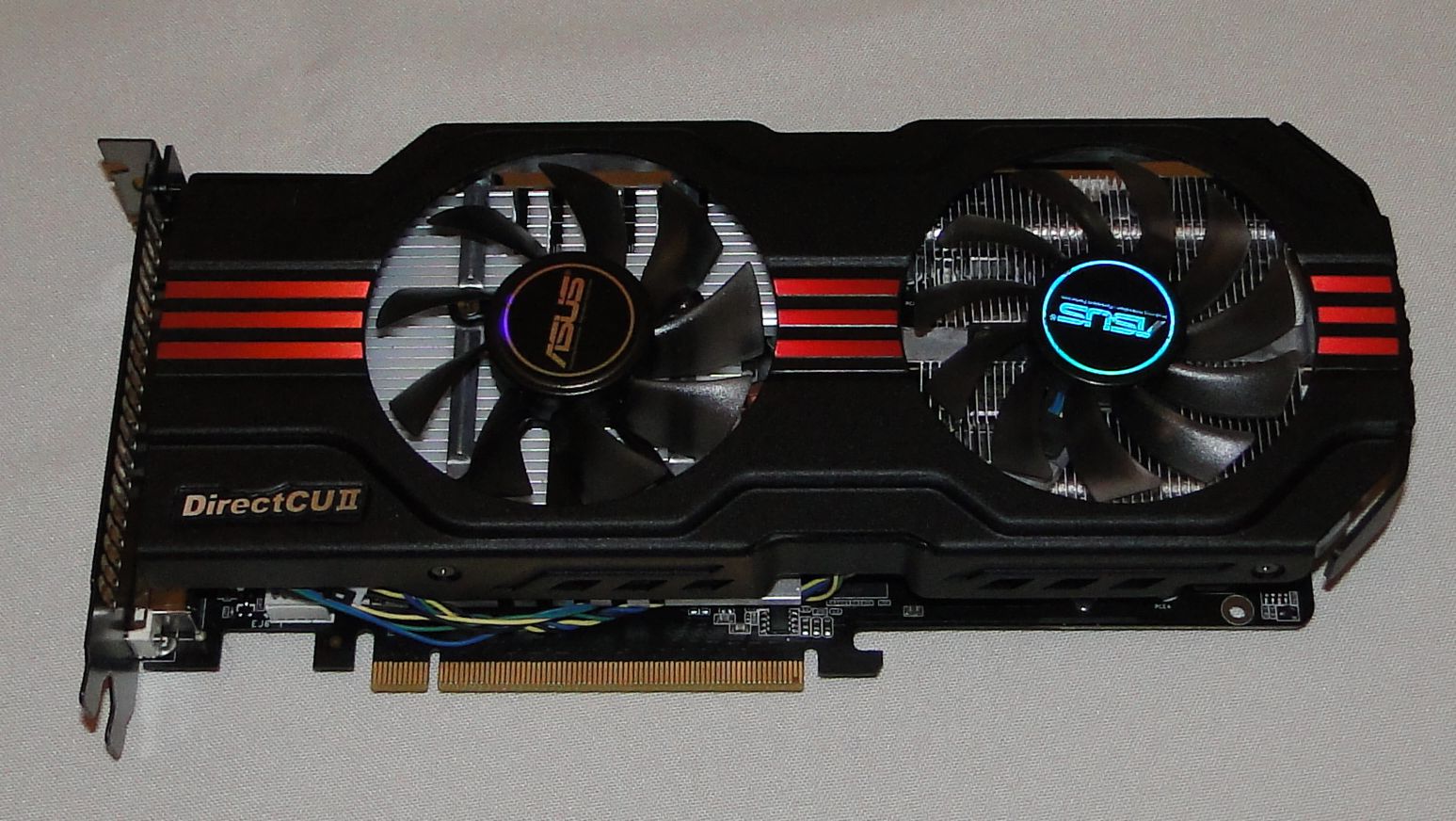 The card is not small, but as we soon see it is but a shadow of its bigger brothers.

Two 80 mm PWM fans keep the entire unit nice and cool, all the while staying pretty quiet even when temperatures start to rise.  The fans are not ducted, so hot air can travel not only outside of the case through the grill on the back of the card, but also directly into the case itself.  There will be some extra heat being introduced into the case through this configuration, but in a well ventilated case the impact should be extremely minimal.  The heatsink itself is comprised of two parts.  The main portion sits above the GPU and holds in place the three heatpipes that go to the other heatsink unit.  The primary heatsink over the GPU is a solid aluminum block with extruded fins.  The heatpipe attached heatsink is comprised of individual aluminum fins tightly packed together.  The beauty of this secondary heatsink is that the cooling fan also blows directly onto much of the power circuitry supplying the GPU and memory.

The board design is custom and Asus added some extra power circuitry that should help in terms of stability at overclocked speeds.  The card seems sturdy and well built.  The power is provided by 2 x 6 pin power connections.  There is a nice reinforcing bar at the top of the card that keeps it from bending and warping when installed in a tower style system with the card supporting this relatively heavy heatsink.  The back plate provides 2 x Dual Link DVI ports as well as a mini-HDMI connection.  Unlike competing AMD solutions, a single card from NVIDIA cannot drive 3 or 6 monitor outputs, so users are limited to choosing a SLI setup to get NVIDIA Surround support.  Unlike the latest AMD cards though, both DVI ports are dual link (the HD 6000 series typically have a single dual link port).  Right above the ports is the exhaust outlet for the cooler.  The ENGTX560 only supports dual SLI solutions and not triple SLI. 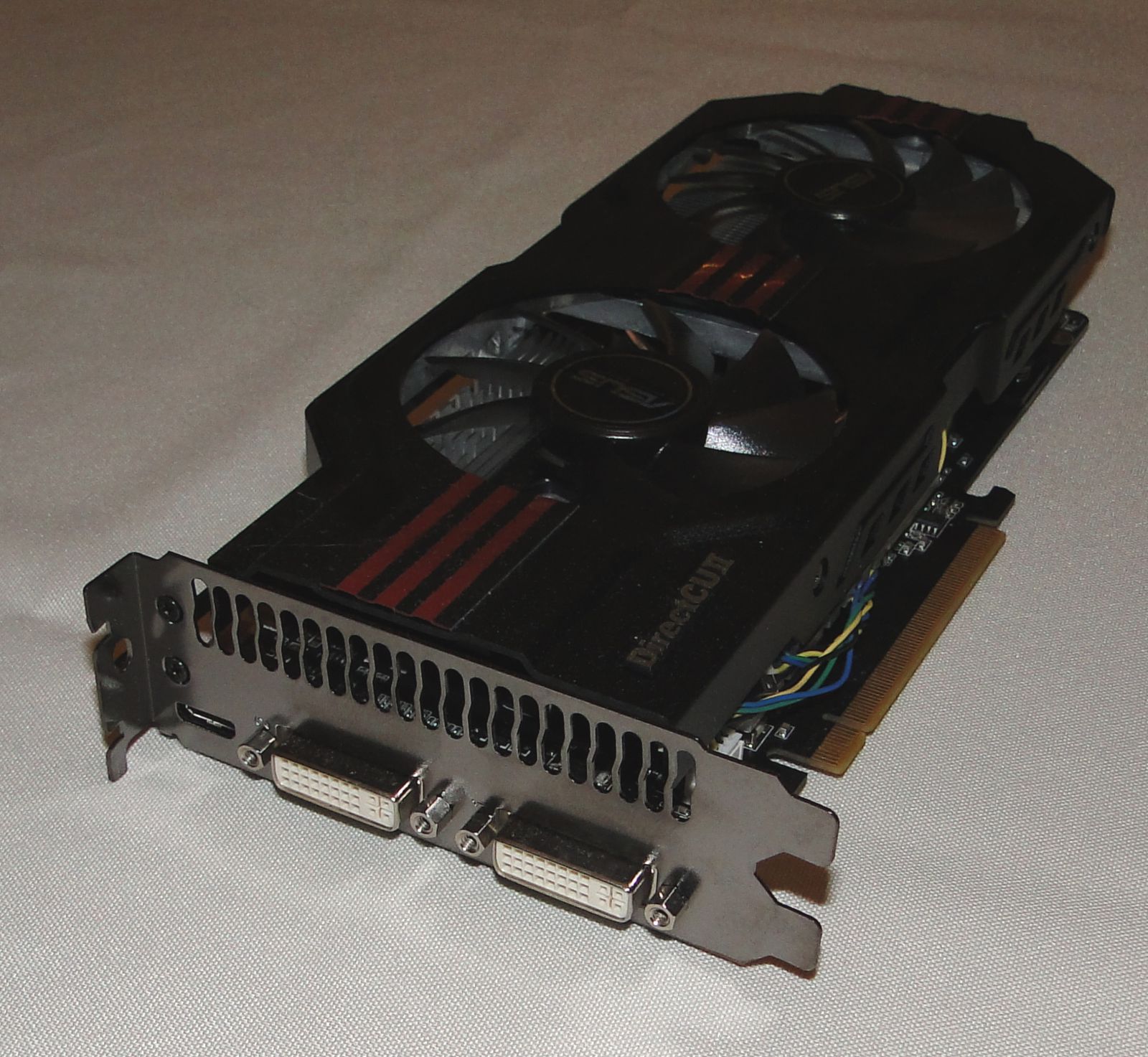 The outputs are kept pretty minimal on this card.  This is to allow as much airflow as possible out of the heatsink.  It might even save a few dollars by not including a Display Port connection.

Unlike the higher end DirectCU II cards, this is only a two slot affair.  I appreciate the more compact nature of this particular card when compared to the ENGTX 570 and ENGTX580 from Asus.  This does limit Asus in the configuration of the output ports as compared to their triple slot units (especially those based on the AMD HD 6000 series).

Overall the card looks pretty sharp.  The matte black heatsink shroud is nicely offset by the metallic red stripes running the length of the card.  The PCB is also matte black, and overall the entire card is quite the looker.  With the Asus and DirectCU II logos stamped across the card it makes it a nice advertisement for users with case windows. 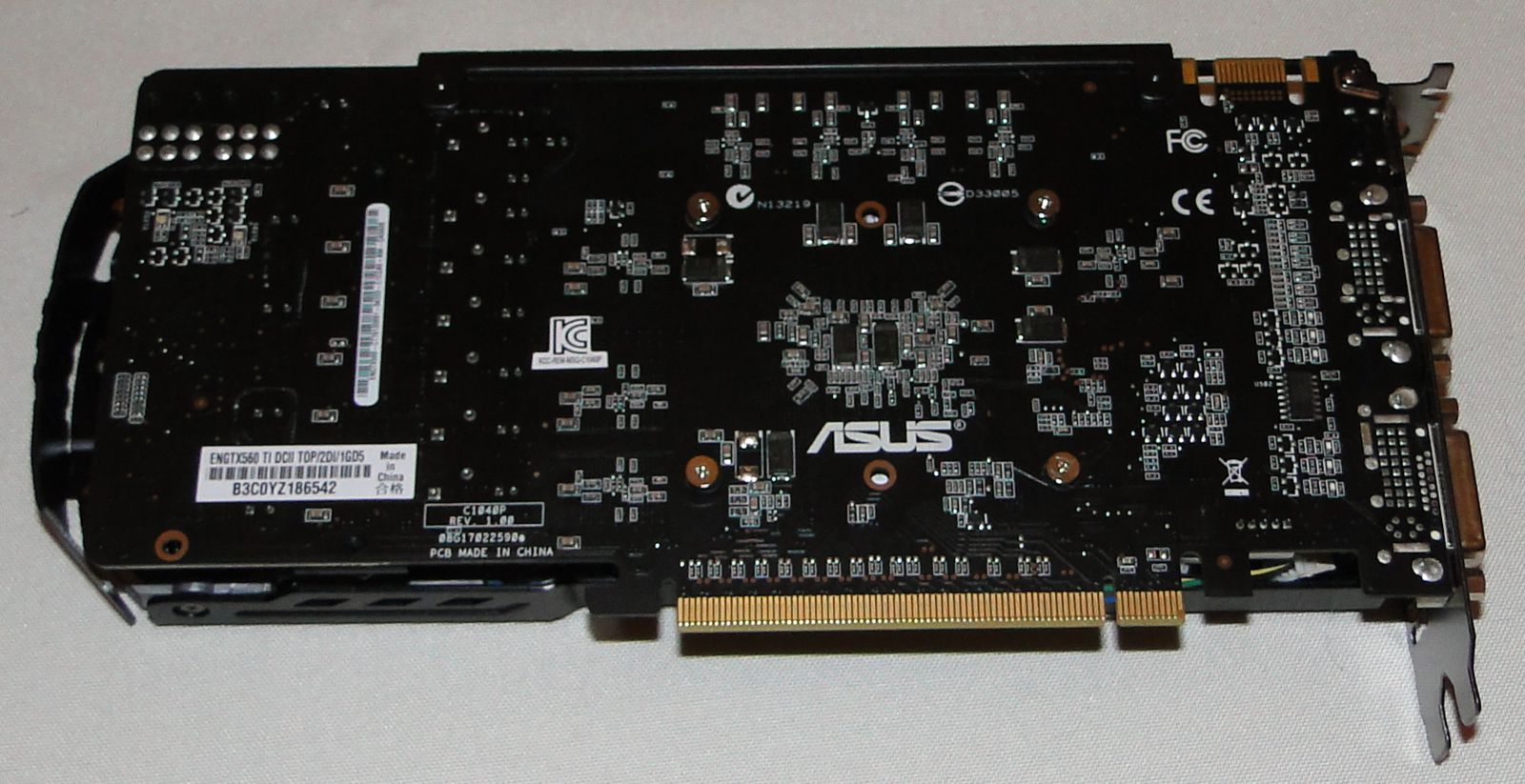 This is the only card of the three which does not feature the NEC Proadlizer.  Such overkill is also likely not necessary for a chip of this TDP.

When running at default speeds the card was very quiet.  It seemed to make a bit more noise than the MSI Twin Frozr III series of cards, but it was very close overall.  Even at load the card kept nice and quiet in a closed case with good airflow.

So far with the release of next generation cards, the 560 Ti is relatively unaffected at this point.  The prices may fall a small amount when AMD releases the Cape Verde, but those particular cards are aimed at the sub-$150 range.  This particular card should stay competitive at this price for some time yet.

Make ’em hear you boot up from a block away