Not content with having just the reference GTX 570, Asus decided to make a monster of a card.  Back at the 2011 CES I first saw the prototypes of the triple slot cards developed for the DirectCU II lineup.  I was frankly quite shocked that someone would put something that big in their system.  Well, I shouldn’t be shocked as I do have an internet connection and have seen some pretty atrocious things in my time.  Still, why would someone invest in a triple slot card?  Well, it does have a couple of advantages over competing two slot solutions featuring the GTX 570. 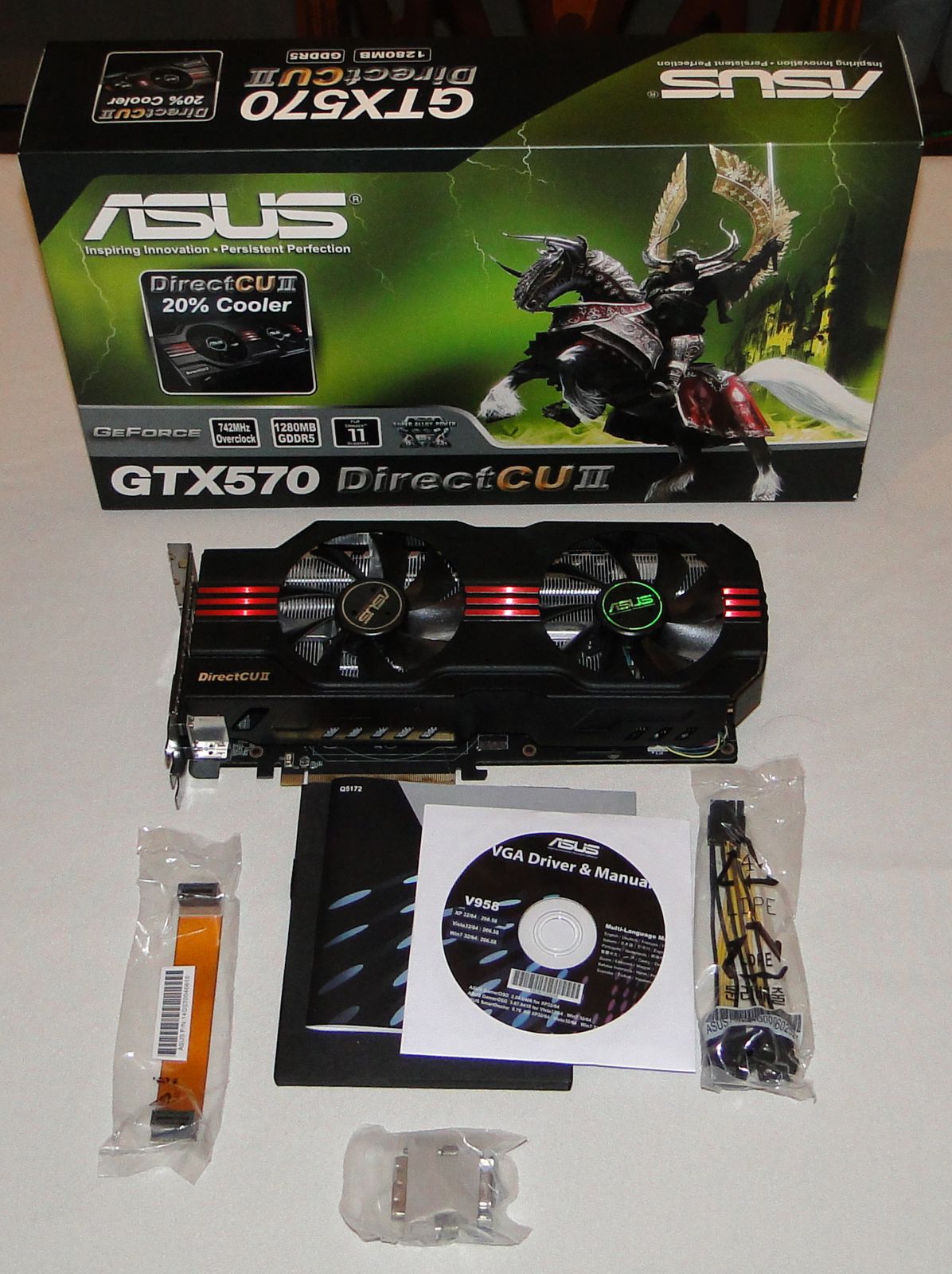 The ENGTX570 features a small bundle, which is odd considering the size of the card.

First off the GTX 570 is the refresh of the GTX 470, but with a CUDA core count more in line with the GTX 480 (480 CUDA cores, oddly enough).  A 64 bit memory controller and the associated ROP partitions are disabled on the GTX 570 SKU as compared to the full GTX 580.  This comes out to be 40 ROPS and 60 texture units.  The GPU is clocked at 742 MHz (shader clock at 1482 MHz) while the memory hums along at 950 MHz (3800 effective) on a 320 bit bus.  This provides the GPU with a pretty impressive 152 GB/sec of bandwidth from the 1.28 GB of memory onboard.  This particular GPU is slightly overclocked out of the box (by about 10 MHz) and the memory is left at stock speeds.  This does leave some leeway for users to overclock to more significant levels.

The cooler is of course massive and features two 80 mm PWM fans.  The shroud is officially “2.5” slots wide, but it will take up all three slots.  The heatsink is divided into two pieces again, but instead of the solid aluminum piece and three heatpipe unit that we saw in the GTX560 Ti Top, we have a 5 heatpipe unit with no solid aluminum piece.  This design allows both fans to cool components on the PCB.  In this particular case the memory chips will receive a bit more cooling.  The card is actually a custom design from Asus from the PCB on up.  It features more power phases than the standard GTX 570, and is a much heftier card when considering the choice of components as well. 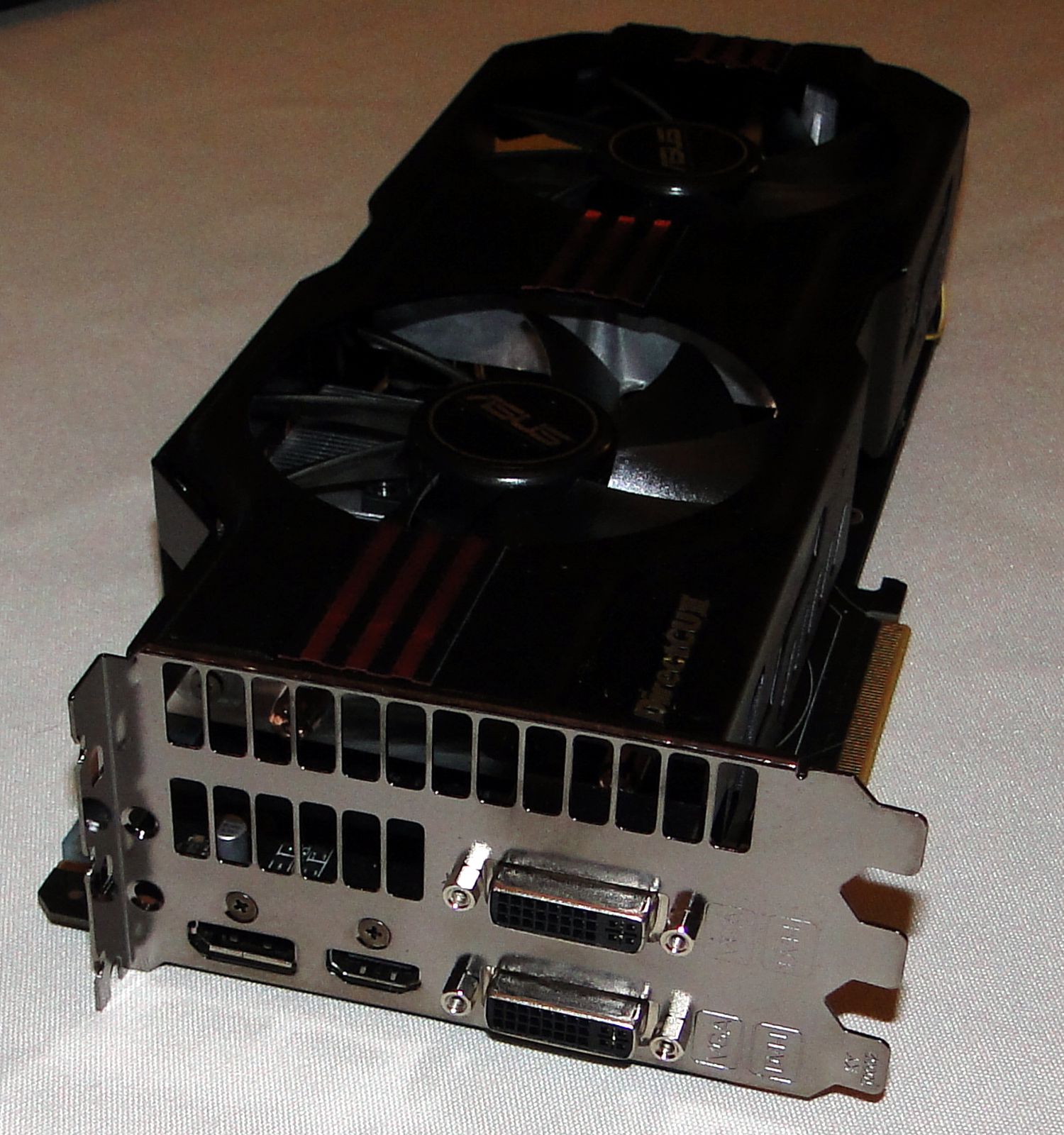 The extra space allows Asus to bundle in a few extra outputs.  The individual card does not support more than two monitors at a time though.

The card has an extensive support plate on the back of the card, behind the GPU and other components.  Here we can see the Proadlizer chip from NEC providing power to the GPU.  The plate adds support to the card so it can adequately handle the heatsink’s weight.  It also has some nice printing on it, and in the correct orientation, so a person walking past a windowed case knows exactly what card this is.  The matte black finish and red stripes on the shroud again give this card the signature subtle, yet attractive appearance. 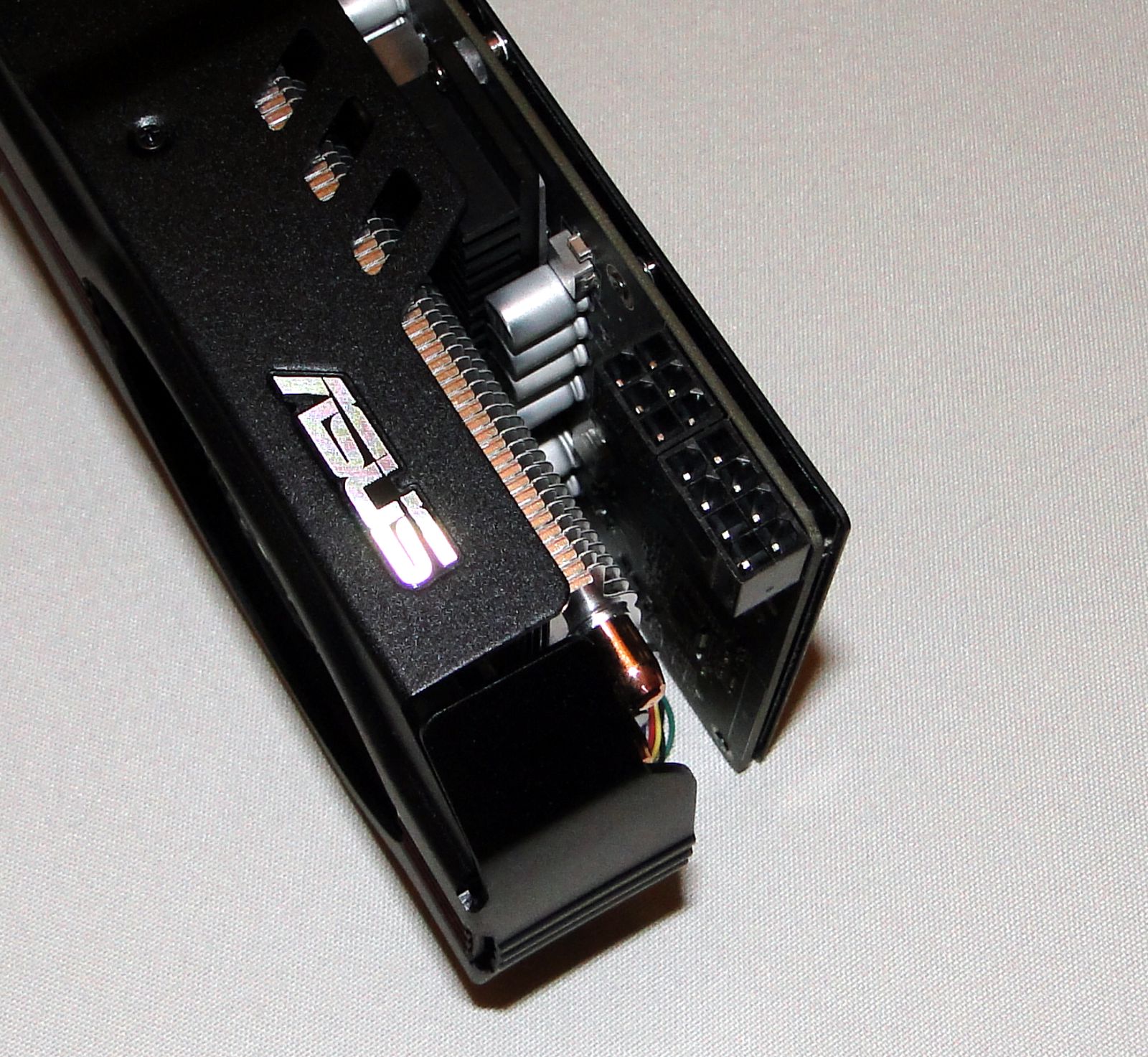 Asus does not diverge from the reference power design of a 6 pin and 8 pin power header for the GTX570.

Power is supplied by a 6 and 8 pin power connection.  It might have been nice to have dual 8 pin connections for some extra overclocking prowess, but that is not the case.  Considering the amount of cooling on this board, and the disabled CUDA cores/memory controller on the GTX 570, it would not be surprising if the card was able to overclock higher than expected.  The extra power still could have made some impressive strides.

The output plate is another pleasant surprise for this card.  While the card cannot output to more than two monitors, we do have a bit more flexibility with this configuration.  The card has 2 x DL DVI, 1 x HDMI, and 1 x Display Port.  There is also a very large and open vent space out of the back of the card.  This will provide a lot more airflow than what we have seen with other dual slot cards.  Though the card itself is not ducted so all exhaust goes out of the case, the larger openings will provide extra outflow. 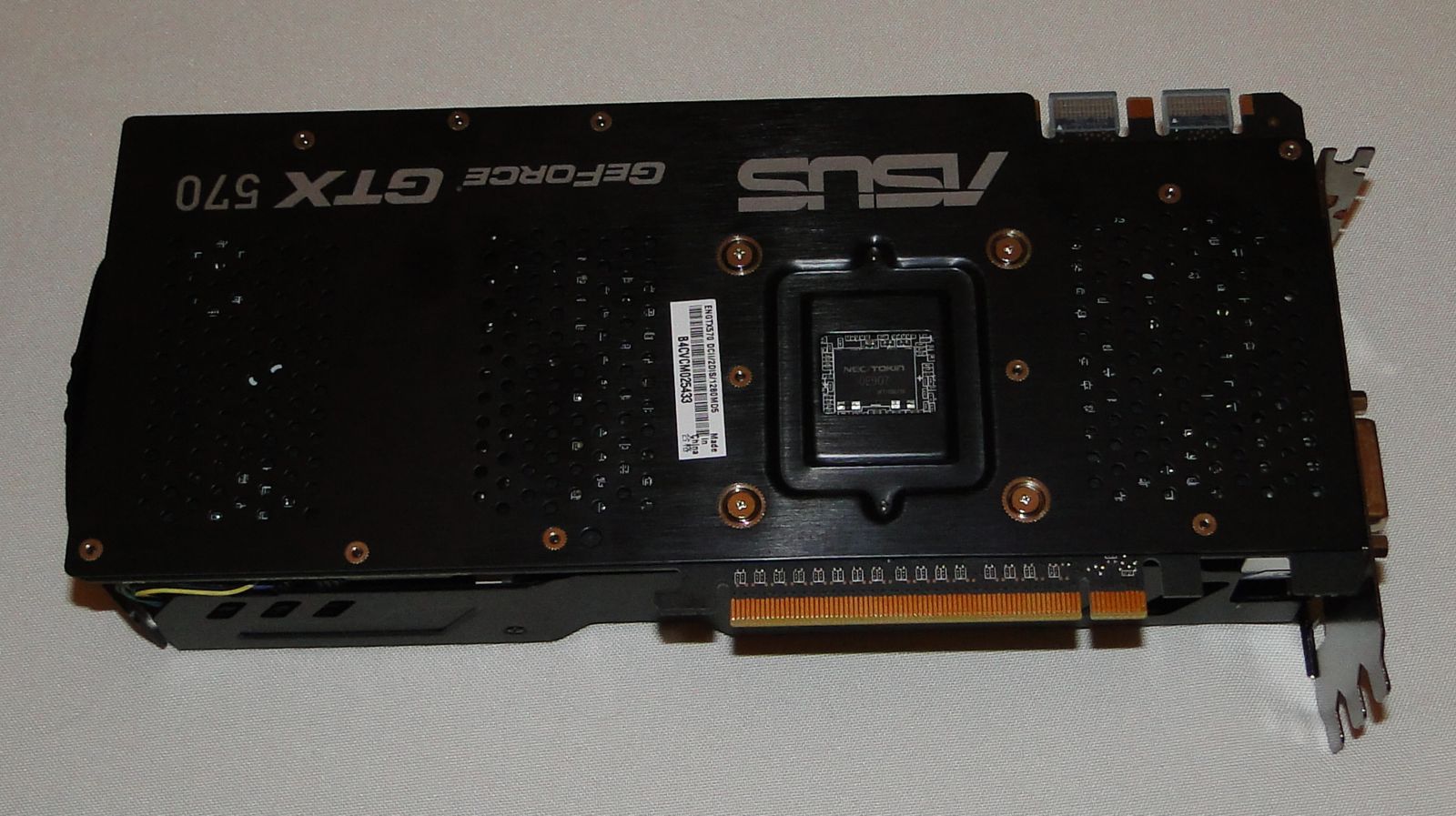 This is a nice shot of the rear of the card with that massive back plate.  Note the single Proadlizer behind the GPU.

With the massive heatsink and large PWM fans, this card was very silent through all operations.  I do not think that I ever heard it once, or even noticed if the fans would spin up unless I was watching the GPU Tweak utility.  This card is able to match the best the competition has to offer.  The only potential issue with this card is that it could in fact be too big.  Triple SLI would be an issue in most cases, because three of them would take up 9 slots!  Good luck in squeezing another type of card (like a sound card or RAID card) if even using these in two card SLI.